George Elbaum’s Speech at the 2017 School of Dialogue Gala

I was born in Warsaw almost 80 years ago, and when I was 1 year old Hitler invaded Poland.  Soon a wall was built around our neighborhood, and it became the Warsaw ghetto.  I had an extended family of 12, but only my mother & I escaped the Nazis and survived the war, the Holocaust.  My mother was a young attorney before the war, and after smuggling herself & me out of the ghetto she survived by luck, strength and wits, working as a French or English governess, a cook, maid, laundress.  I was hidden by several Polish families, and it is because of them that I survived and am here with you today. I also survived by sheer luck. Being too young to understand anti-Semitism I showed no fear when Nazi soldiers searched the apartment of a family with whom I was living.  When escaping to the countryside with another family during the Warsaw uprising I played with a live grenade and threw it away a few seconds before it exploded. My luck continued after the war: in 1949 the Polish communist government sent my mother to Paris to establish Polish bookstores for the Polish emigre community in France, and I was allowed to go with her because I was only 10 years old and there were no survivors in our family with whom she could leave me. In Paris my mother established a Polish book store, then defected, received a visa and came to America, and I followed her a few months later after I too received a visa.

A month after I arrived in America I started school, 6th grade, though I spoke no English and no one in that small southern town spoke Polish. It was difficult at first – I didn’t understand the culture, after learning English I had a strong Polish accent and I started stuttering badly, perhaps because of wartime memories. After 4 years of high school in another small farming town I lost most of my accent and most of my stuttering. Because I fell in love with airplanes when I was 4 years old hiding in an old shed in the ghetto and saw one through a hole in the roof, exactly as you see on the screen, I studied aeronautical engineering at Massachusetts Institute of Technology, earned 4 degrees there, worked in American aerospace industry, got a private pilot license, crashed an airplane and walked away unharmed (luck), flew hang gliders for 25 years, crashed several times and walked away from all but the last one (luck again!), worked in foreign trade for 25 years, and now I’m a partner in a real estate development firm and give talks about my Holocaust childhood in high schools – in 2017 I gave 47 talks, of which 7 were in Poland.  Why high schools?  Because high school students are old enough to understand what I lived through and survived, but they are still young enough to have an open mind and to accept obvious truths without prejudice, unlike most adults.

I’m often asked why after a life of engineering and business did I start giving talks in schools about my Holocaust childhood?

Until 7 years ago I kept an emotional distance from the Holocaust because I saw that my mother, although very successful in business in America, was tormented by the Holocaust till her death 13 years ago. Then 7 years ago I saw a documentary film not directly about the Holocaust and I suddenly realized that my story has value. When the film ended and my wife asked me, perhaps for the 20th time, if I would write my story, I surprised her and myself, told her I would do it, started the next day, finished and published my book 3 months later, and I thought that I was finished.  However, a few days later I was asked to fly to Boston and speak at an organized event at Boston’s Holocaust Memorial on Holocaust Remembrance Day. I practiced my speech many times until I thought that I would do it smoothly, but when I was actually at the Holocaust Memorial giving it, I choked many times.  When I finished, several people from the audience approached me immediately and told me: “You must keep doing this, telling your story so it’s not forgotten!”  I’ve now given more than 160 talks in the last 7 years, and I still choke a little, but the feedback from the students, especially in the thousands of letters I’ve received from them afterwards, reminds me how important it is to tell my story to the next generation.

I’ve also been asked what made me return to Poland after 64-years absence. It was all because of a very sensitive Polish teacher from Swidnik. In 2012 she came to the US with half dozen students to an annual international event, and where I speak every year. At this event, the Polish students always ask if I’ve been back to Poland since leaving it as a child, and for several years I would say “No!” and explain that my childhood during the Holocaust in Poland was not very happy – I was separated from my mother and living with strangers – so I didn’t want to return there. Then in September 2012 this Polish teacher asked me if I would come to her school in Swidnik to speak at their similar international event, and I again said “No” and why. She understood my reason but after a few months she emailed me, saying delicately that she hoped she was not intruding on my privacy but she checked the pre-war archives available on the web, found the 1939 Warsaw phone book, and was enclosing for me the page with my father’s name, profession, address and phone number. I was stunned: my father was never a real person for me and, as he was a reserve officer in the Polish army, he left for the Eastern front when the war started and never returned, so I had no memories of him. Staring at his name on my computer screen, I realized that he was a real person, that in 1939 people would see his name on that page and phone him for his legal services. It felt almost like a physical blow to my chest! I stared at the screen for a few minutes, then replied that I would come to Swidnik and speak at their event. Now is the 4th time that I’ve returned to Poland since that email, and I want to thank that teacher, Anna Szewczyk-Hereta, for bringing me back to Poland. Anna is here, sitting with my family. 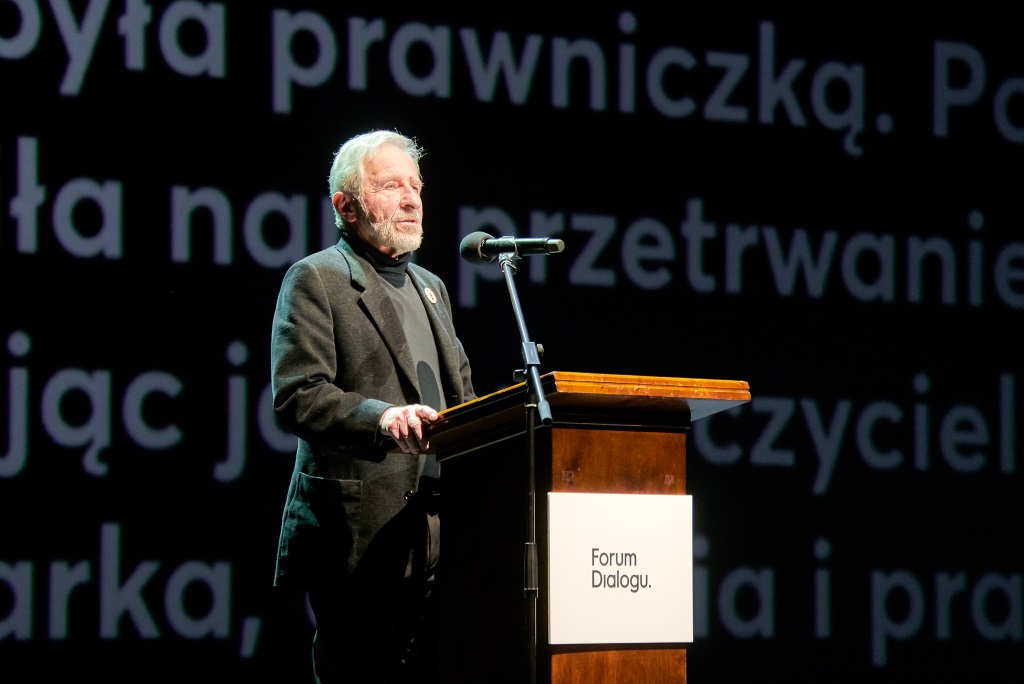 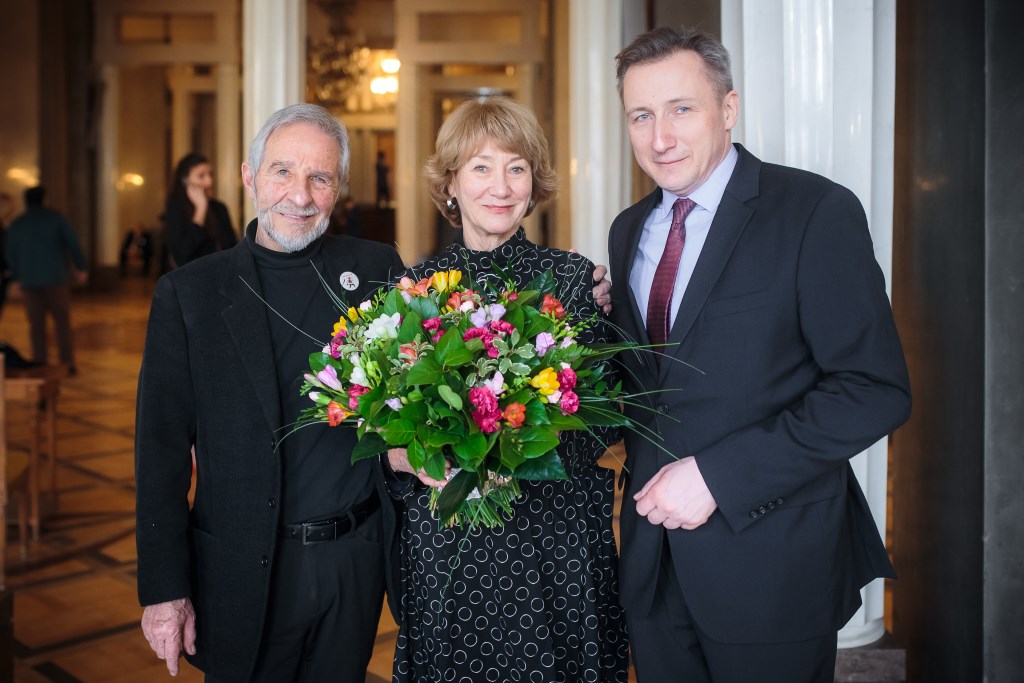 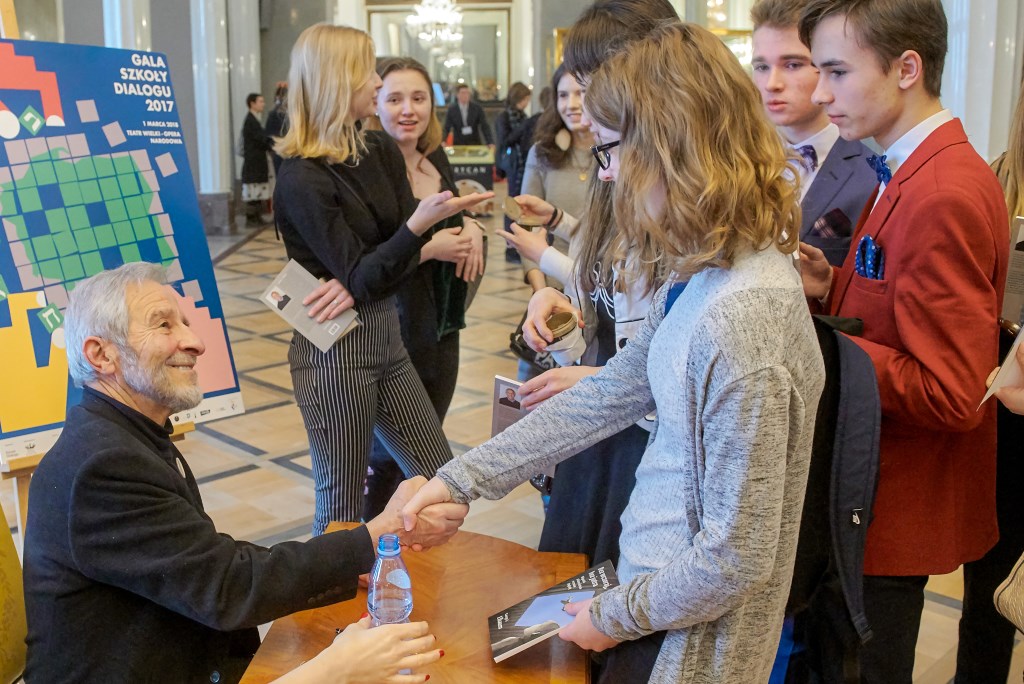 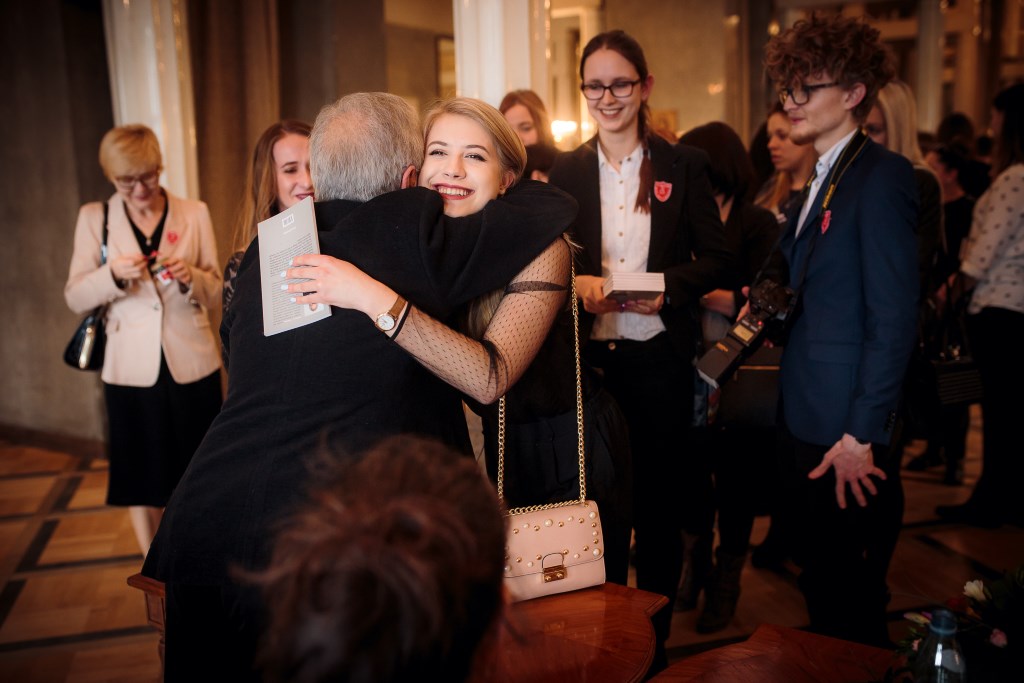 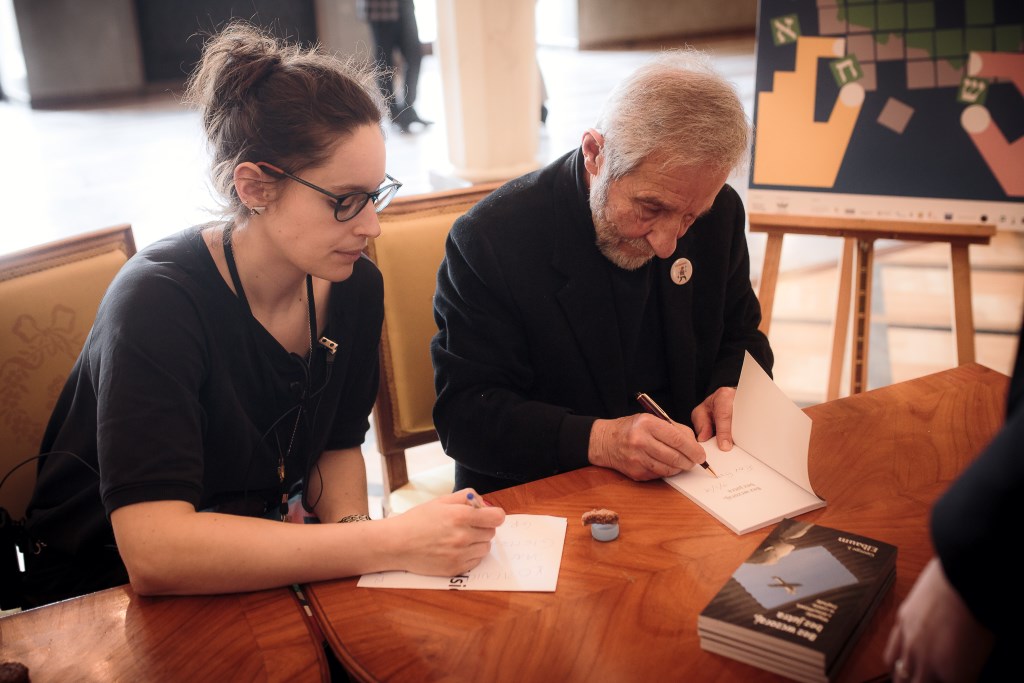 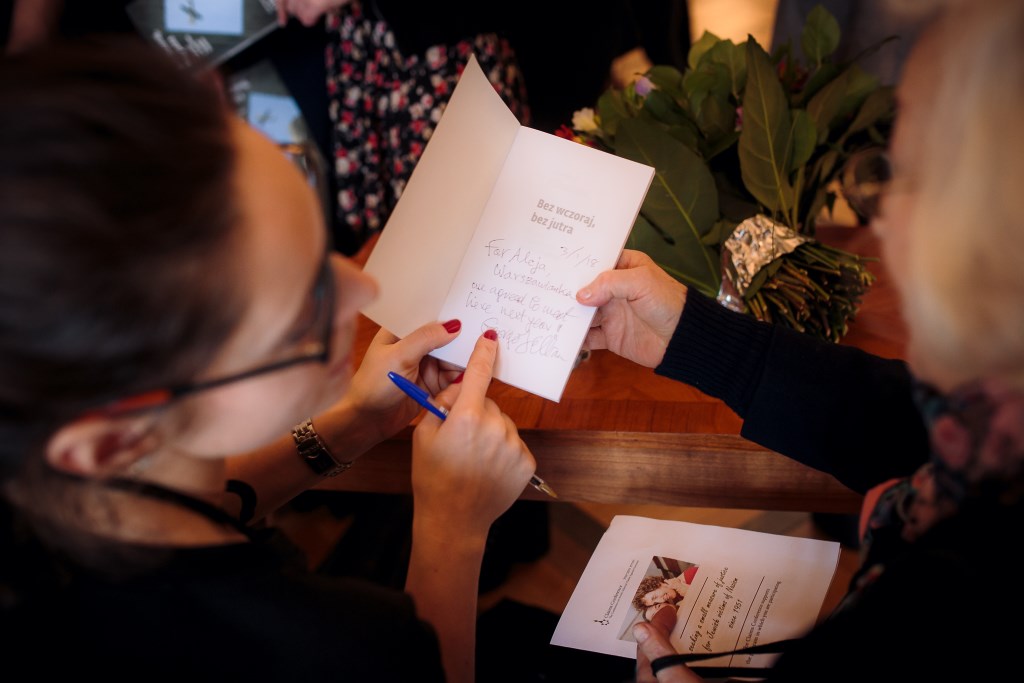 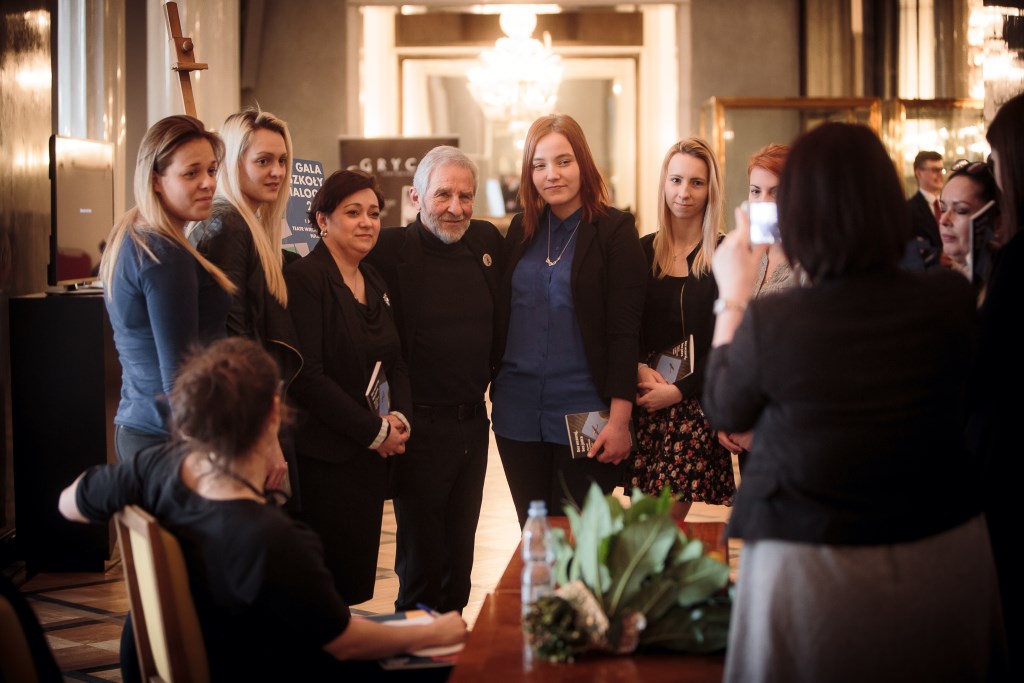 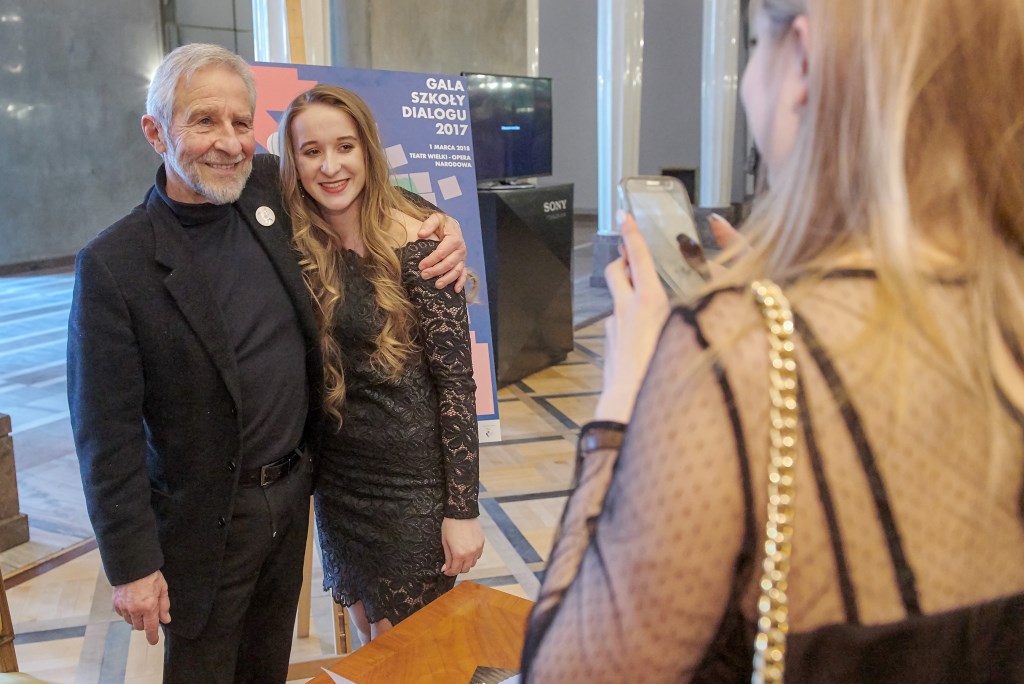 Why I am here now?  I’ve had 3 major strokes of luck in my life: surviving the Holocaust, a wonderful life and career in America, and happiness in 45 years of marriage, so I feel that I should be giving something back.  For the students here, I have a very personal message that I hope you take to heart.  I hope you realize that anti-Semitism is just like all other “anti’s”, be it anti-Christians, anti-Muslims, anti-Africans, anti-homosexuals – it’s hatred for someone not because they have ever done any harm to you but because they are different, maybe different color skin or different way to worship God – and all “anti’s” are negative and lead to destruction.  In this world, in this life, if you want to accomplish anything good, you must be for something, not against something.  I’m here with you today because several Polish families risked their lives to save me – they knew in their hearts it was the right thing to do.  Please remember this as you face choices in your life: be for something, not against something!

I flew in from California yesterday, but anticipating my visit to Poland and this Gala I thought about the similarities & differences between America & Poland, and I want to share with you my thoughts.

America was born and Poland was reborn in a struggle, so both countries exist now only because of the strength & heroism of its people.

Both countries have the right to be very proud of our histories. However, each country’s history also has dark times, during which there was much heroism, but also dark actions which we regret because they are shameful.

As an American, I know our history, and you know yours. But we also know that only by facing our dark actions, our social sins as countries or our personal sins as individuals, is there any hope for improvement and redemption.

For any country’s government or any individual, hiding painful truth is moral failure. Both of our governments are now struggling to face past sins, but with mixed success.

For the sake of our 2 democracies and our peoples, I very much hope that truth will prevail.