School of Dialogue at Henryk Sienkiewicz Junior High School No 3

At any rate, one can take a walk in the Będzin. One may go left or one may go right; one may ask as passer-by where to go to see something. He may or may not send us to one of the three Jewish cemeteries. To the park or to that place where cars are parked and nobody knows that they tread on graves. Or to the third one in Podzamcze street which was established as a result of the 1931 cholera epidemic. Today it contains approximately 800 gravestones, or rather just crumbling parts thereof. Another 200 are covered by soil. The sandstone and limestone gravestones bear inscriptions in Yiddish and Hebrew. Sometimes traces of paint can still be found. The cemetery is overgrown by weeds and slowly consumed by erosion. The passer-by may also point us towards the place where the synagogue used to be, now only commemorated by an obelisk standing there. Or he may point us to the tenement in 60 Modrzejewskiej street in whose basement we can find traces of the former house of prayer.  We can feel the old wooden floor under our feet and see the symbols and Hebrew writings on the walls. Maybe the passer-by will send us to 3 Potockiego street where some time ago a mikveh was found, with whole tiles and a pipe that led the steam outside.

Most of the 27,000 Jews held there were murdered in Auschwitz-Birkenau to which they were transported from May 1942. The Jewish Combat Organisation led by Józef Kożuch and his brother Bolesław, Cwi Brandes and Frumka Płotnicka fought in the Będzin ghetto. Their resistance was broken after only a few days and all of them most likely perished back then. In the Square of the Ghetto’s Heroes there is a monument, and next to this monument is a tenement in whose basement bunker the JCO fighters were hiding.

The helpful passer-by may also send us to Okrzei street where Katz, Stawski and Werner were murdered, to Piłsudskiego street where the Baumgartens and the Lewaniczes were killed, and where Grotman, Kalman and Sekowicz died. But first, he would have to know of all those places.

Before the war, there were nearly 28,000 Jews in Będzin, and now there is not one of them left.

In 2010, thanks to the workshops organised at the junior high school in Będzin by Paulina Adamska and Małgorzata Jastrzębska, and also thanks to their own work, energy and efforts, the students prepared and organised a walking tour  for their parents.

It was an educational tour whose route was to lead through the places that held the most importance to the Jewish history of Będzin. 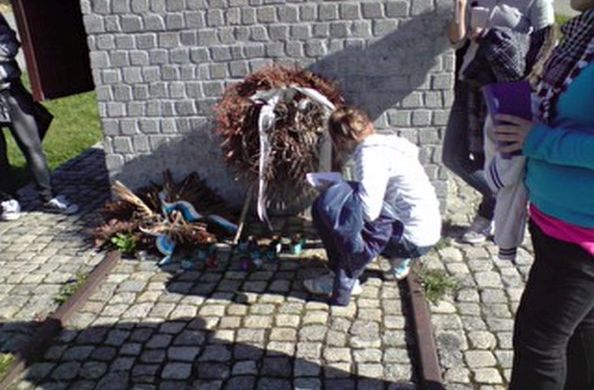 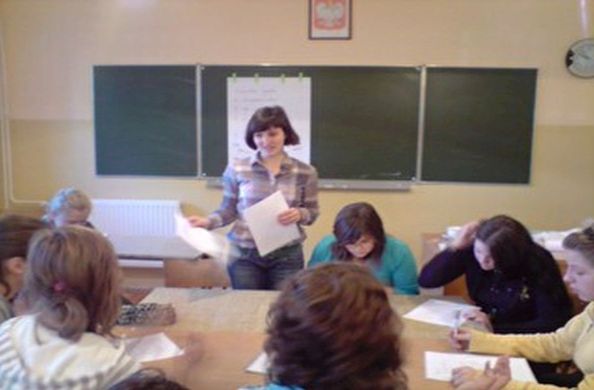 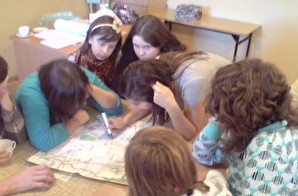 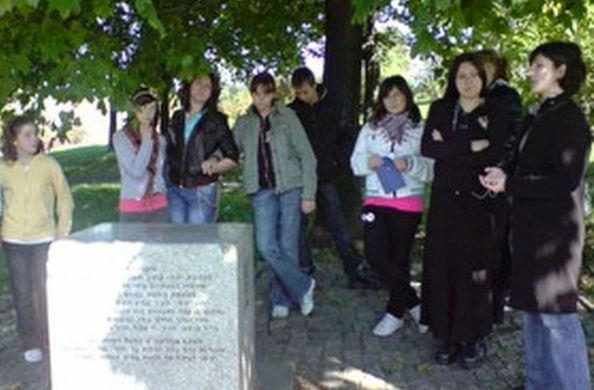 After leaving the school, going from Krakowska street, the group first reached 17 Sienkiewicza street where Jacek showed the participants a large, deserted and dreary building that before the war used to house the orphanage of the Jewish Charity and was decommissioned in 1943.

At today’s 4 Moniuszki street, formerly Św. Jana street, Izabela showed the participants a house with one of the two sukkah booths surviving in Będzin in which Rutka Laskier, author of a diary written between 19 January and 24 April 1943 and published several dozen years later, lived with her family. Her notes are full of fear interspersed with her first infatuations.

Next, Ola led everyone to the cemetery in Podzamcze street where she briefly told its history and about the people interred on its premises. She also asked why no one was surprised by its horrible condition.

In the same street as the cemetery, but on the opposite side, is the former maternity hospital that was later changed into a hospital for the Jewish population in general. Standing on the spot of the burned down synagogue, Ada and Łucja told its history. How it was first made of wood, later of stone. How the facade had two steeples and how there were polychromies inside. And how it was burnt together with the people praying inside. In front of the church Klaudia told the story of father Mieczysław Zawadzki, who opened the church’s gate and let some Jews in to the Church Mount, thus saving them from the pursuing Germans during the night from 8 to 9 September 1939.

He is Będzin’s Righteous Among the Nations.

Then the group went to Cukerman’s gate where the house of prayer used to be that now is just a monument. It was built at the turn of the 1920s and the 1930s. The first floor was for men, and the second for women. During the war it was used as a warehouse, and after the war it was repurposed into a residential building. Now the Cukerman’s Gate Foundation is looking after it.

At the intersection of Małachowskiego and Potocka streets Weronika told the history of the large tenement called Wiener’s House. How it used to be called “Little Będzin” and how it contained a synagogue, a school and a printing shop. How it also contained a cafe, a restaurant and a hotel. How circus artists, musicians and organ grinders used to stay there. How concerts were played and plays staged. How in its dreary cellars and twisting corridors small crooks lived next to prostitutes.

She also told everyone about the Mizrachi synagogue discovered in Wiener’s House in 2004 by the local activist for the heritage of Będzin’s Jews. It was built sometime during the Great War. To this day one case still see the zodiac paintings and polychromies with religious symbols – one of the last few remains of Będzin Jewish community.