School of Dialogue at St. Valentine Junior High School No 2

Silesian Voivodeship is next to Lesser Poland Voivodeship with the Vistula river forming a natural borderline between them. It is at this river border that Bieruń is located. The town’s coat of arms is pretty – a black stag boasting golden antlers with a white long-necked swan perched between them.

Bieruń is located on the road from Krakow to Wrocław, along a once-prominent trade route, which was one of the reasons for Jewish merchants and craftsmen to settle in the area. Jews are believed to have settled in Upper Silesia as early as the 13th century, but in Bieruń only in the 18th century or perhaps the 17th century. A Kahal was formed in the 18th century, with a beit midrash, cheder and a Jewish cemetery. The brick 19th century synagogue is now home to the local Voluntary Fire Department. After the partitioning of Poland in the 18th century, upper Silesia fell under Prussian rule. Local Jews assimilated easily – matzevot that are still at Bieruń Jewish cemetery have German inscriptions. Jewish intellectuals and middle class of Bieruń were buried there, as well as retail merchants and craftsmen. When the economic situation deteriorated, merchants went bankrupt and many emigrated – the biggest wave of migration came after March 1921, when Bieruń was annexed to Poland. Jews who felt connected to German culture and language would move to Germany. Jews who would settle in their place would come from parts of Poland that had been partitioned by Austria and Russia, and were mostly poor.

After World War I, no Jewish organizations existed, the cheder became a public school and the synagogue started to fall into ruin.

In the summer of 1939 most Jews moved to inner Poland or the Baltic states. The dozen or so that stayed were transported to a transit camp in Oświęcim, and later to ghettos of Będzin and Sosnowiec from where they would ultimately be deported to Auschwitz-Birkenau. Later, in 1945, a death march passed through Bieruń. Among those walking back probably there was no one from Bieruń itself.

Students who took part in the School of Dialogue program, along with Forum’s educators Katarzyna Niewczas and Katarzyna Domagała learned about Jewish history, culture and religion. Working together, often in smaller groups, they shared their stories, exchanged thoughts, opinions and voiced their doubts. They searched for answers to questions that troubled them, attempting to understand as best as they could what is abstract and at the same time very much present in Bieruń.

A few days before the tour they designed for fellow students and town residents, workshop participants organized a happening on Bieruń market square, to draw the attention of passersby and have them stop and ask what’s going on. If someone would stop and ask, students would tell them that it’s about remembrance and reflection. They would hear about what happened there, what used to exist in town and is no more.

Students also organized a poll in which they asked residents of Bieruń what they know and what they do not know. Who is Jewish and what do Jews believe in? Why do they wash their hands and when did Jews of Bieruń leave? 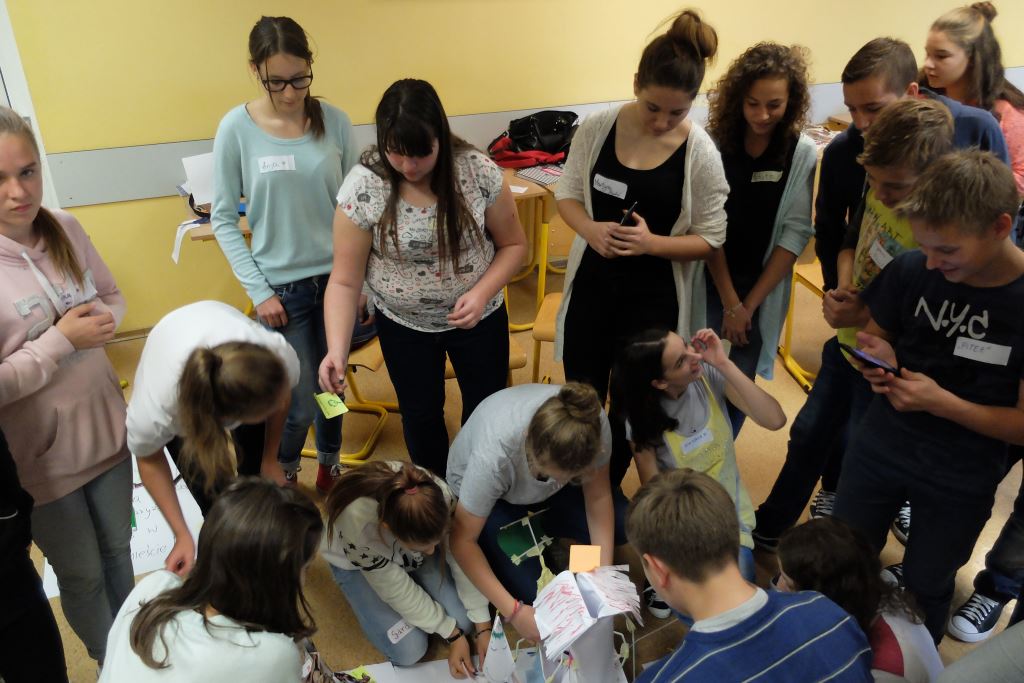 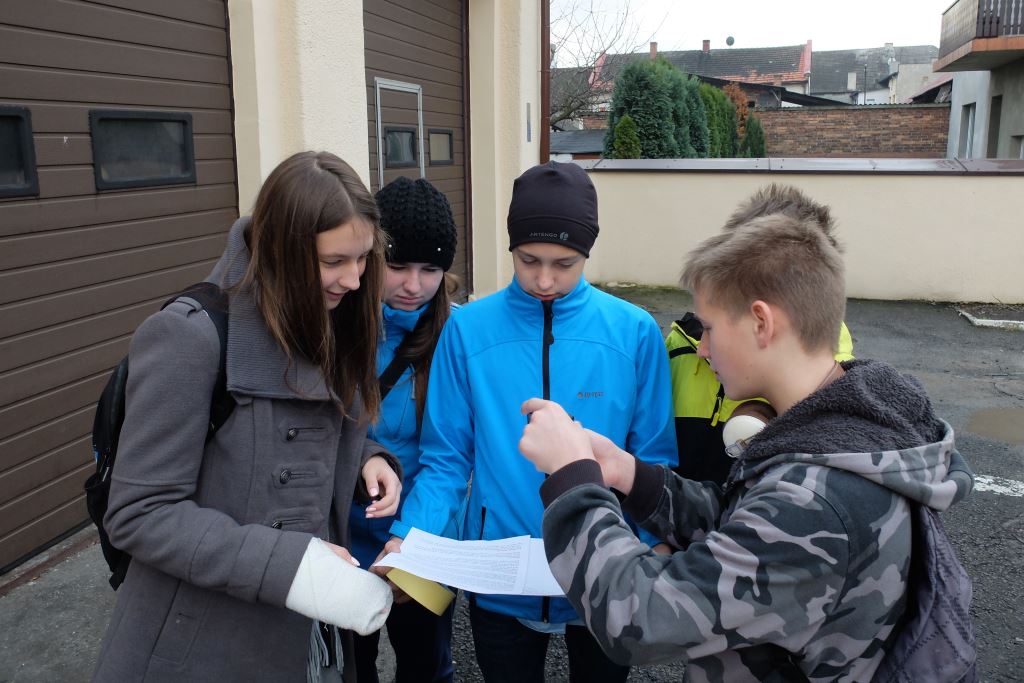 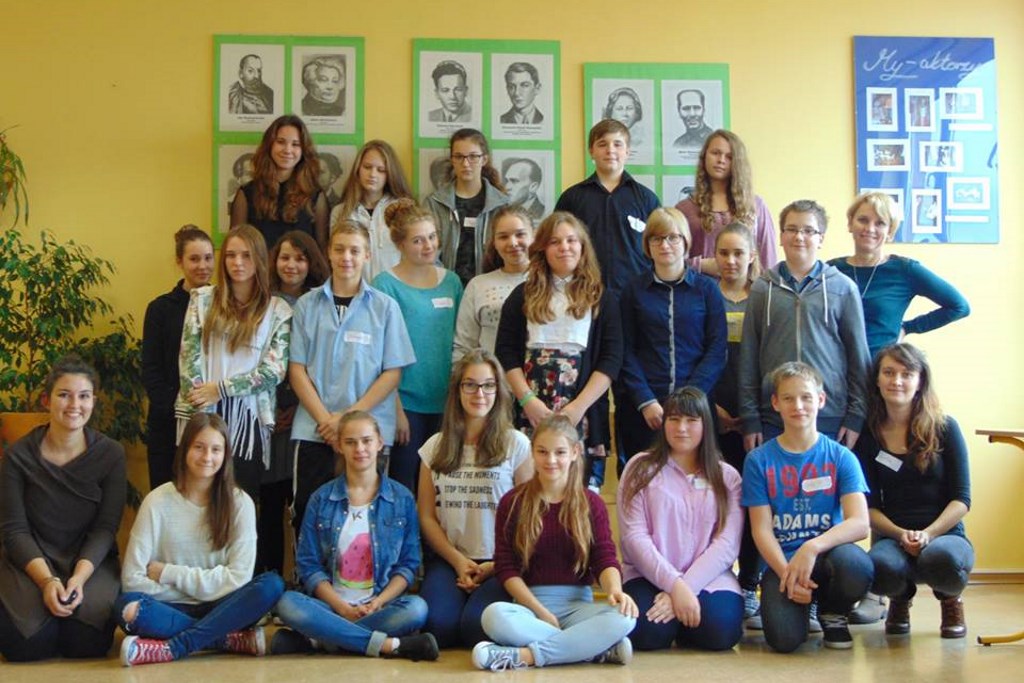 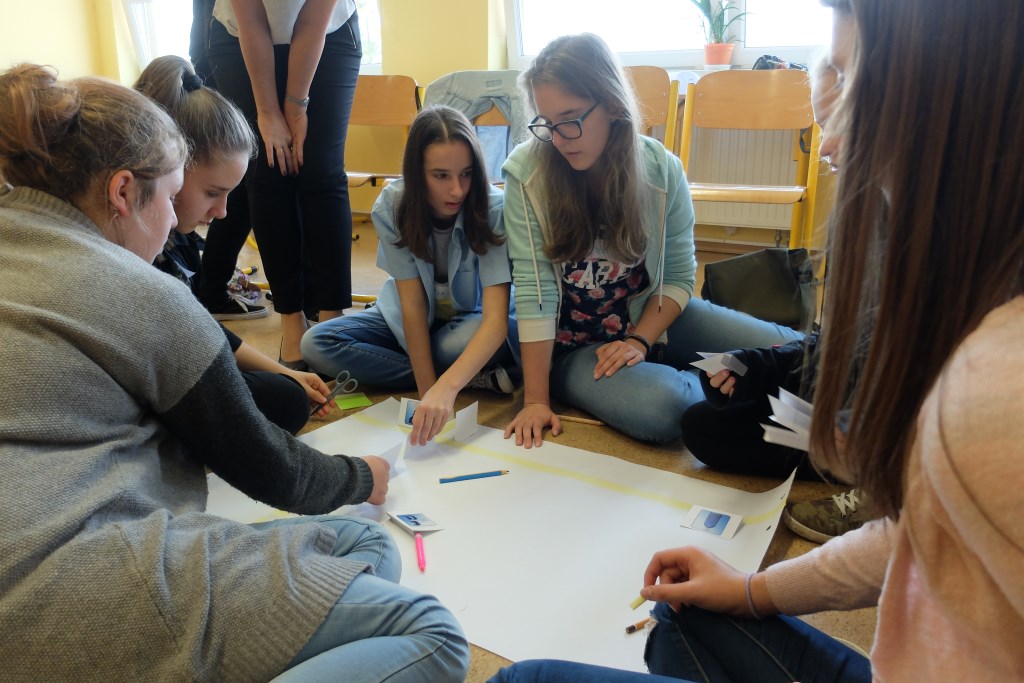 And finally, students conducted a location-based game about Jewish Bieruń. There was even a poster about “Past Residents of Bieruń and Their Traditions” and the town mayor himself invited and encouraged to take part in the game. Competing groups, consisting of town hall employees and school students, teacher and residents, moved between six different stops. The most important of them all was the market square – at the tour outset, groups had three tasks to complete there, beginning with a crossword puzzle asking about different sites of Bieruń, such as the cheder or the synagogue. The puzzle also asked when Jews arrived in Bieruń and why, what was the history of the local Jewish community as well as that of Bieruń. Participants also had a text to read about Jewish holidays that they had to discuss and use to assign different symbols to particular holidays. There were also drawing cards with holiday descriptions that tour participants were to assign to months in the Jewish calendar. At the Jewish cemetery dating back to 1778 and located by Mleczna river, tour participants would read texts about the site’s history and about Jewish tombstone symbols.

They would then group symbols and their explanations as well as talk about what is allowed at the cemetery and what is forbidden; what should be worn on one’s head and how to move around the cemetery in such a way so as not to offend anyone.

In the school, teams had to share their knowledge about Jewish schooling, what Jewish children study and what are their schools called. Answers to all these questions were hidden in word puzzles and written in Braille alphabet. One of Bieruń’s restaurants was where contestants learned about Jewish inn-keeping life before the war – that there were many such inns and just how many exactly. And that these inns were buzzing with life. Contestants tried honey, cumin and dates, sesame and halva, talked about keeping kosher and tried to compose a kosher day menu. In St. Valentine’s church, contestants learned about important sites for Jewish culture and tried to match them with buildings they had read about earlier.

On the site of the former synagogue, teams learned about synagogue interiors and what would the Bieruń synagogue look like if it still existed. Few people in Bieruń are aware that there was such a building in the town. Contestants would try to match images, trying this way or that, following their hunches.

Finally, in Bieruń cultural centre, organizers tallied up the points, summarized the tour activities by showing a film from their happening and treated everyone to homemade cake.

All participants received diplomas and presents that were provided by the Town Hall and a number of different companies.

School of Dialogue is something that offered me much. I can say that this program works as glasses do, as it changed my perspective on Jews.

Program was co-financed from the funds granted by Citizens for Democracy program, financed through the EEA grants.