School of Dialogue at Maksymilian Kolbe Junior High School No 2

“This is where the synagogue was,” points Władysław Tyll with his walking stick. “A beautiful, large building. Huge. Like in the photograph you see there.” The photograph is indispensable as the spot in question only features several meters of well-trodden lawn and a small, grey kiosk. “Here was the synagogue, there, if we walked down Piłsudskiego Street – the bath house. Mikveh – is how we used to call it,” this time Władysław’s walking stick points to a brown four-story housing building. Not everything has changed, though. “This is where the cobbler used to be. A Jew. He even had quite a lot of work, because he was good,” says Władysław, pointing to the brown door frame of the tenement on the main square, where “Shoe Repair Shop” is written in capital letters. This unique walk shows the pre-war town to junior high school students from Błonie. Yet most places Władysław remembers look entirely different now. The synagogue is not there, like the shop with chewy sweets that all kids were after; the Jewish fish shop, where you would get the fifth herring for free, has been replaced by a pharmacy. Yet what is most tragic is that the people who used to make up this town are no longer there. Participants of the School of Dialogue try to bring back at least their memory.

In the 19th century, Błonie had a large Jewish population. Towards the end of the century, Jews constituted 35% of the inhabitants of the town. They mostly lived in the vicinity of the main square – like the cobbler recalled by Władysław – and on Warszawska, Narutowicza and 3 Maja streets. In the interwar period, numerous Jewish charity and healthcare organizations were active here. Jewish political parties had their offices in the town. On 17 September 1939, the Germans entered. At the end of 1939, refugees from many towns appeared in Błonie. In November 1940, the Germans established an over-crowded ghetto there, with over 2 thousand Jews.

The extermination of the Błonie ghetto lasted three days: between 17 and 19 February 1941. Survivors were transported to Warsaw and subsequently murdered by the Germans in Treblinka. We currently know the location of only three Jewish institutions: the Talmud Tora school building on Traugutta Street, the brick synagogue at the intersection of Nowakowskiego and Piłsudskiego streets and the cemetery on Polna Street.

“During the project, we began to discover ‘the Jewish Błonie.’ We discovered it for ourselves. Now we want to show it to others. We are preparing a street game, in which we are going to demonstrate that Jews also have their own history in our town,” decided the students, recalls Weronika. They demonstrated involvement, openness and inventiveness from day one of the workshops. The Jewish cemetery in Błonie, its devastation and the need to preserve memory, was an important subject for them. “It turned out that the Jewish cemetery is very close to my home, but it is very neglected. We would like to improve the appearance of this cemetery together with a group of friends, because we believe that it is just as important as our Catholic one,” said Karolina, one of the students. Students embarked on documenting the destruction and preserved headstones, and – in cooperation with a fellow Hebraist—read the inscriptions on the matzevot. They demonstrated great inquisitiveness during project work: faced with divergent data on the Błonie ghetto, they scoured various sources, comparing information and drawing conclusions. They also conducted an interview with Janusz Oziemski, an expert in local history, and several older inhabitants of the town. Apart from that students gained access to photographs and the family tree of Chaja-Łaja Szpajsendler, a Jewish woman from Błonie. 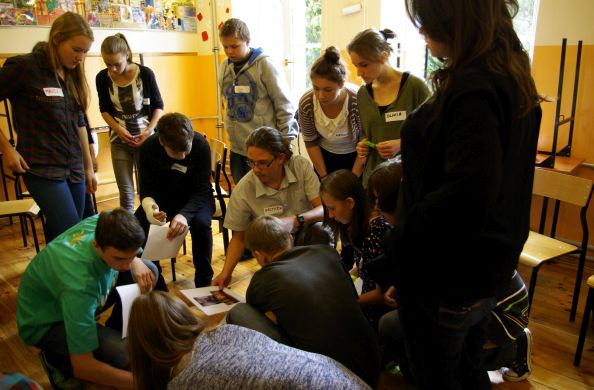 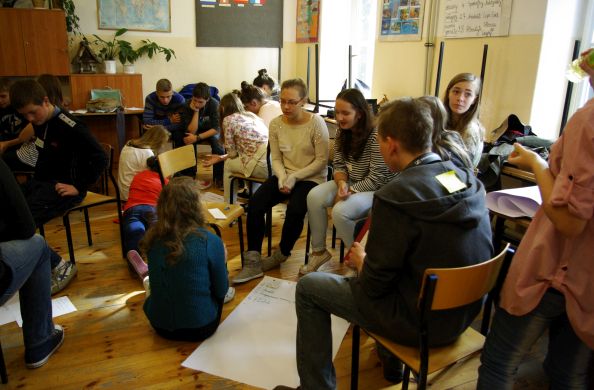 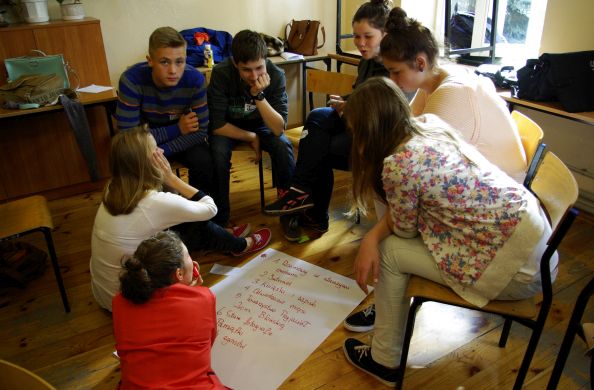 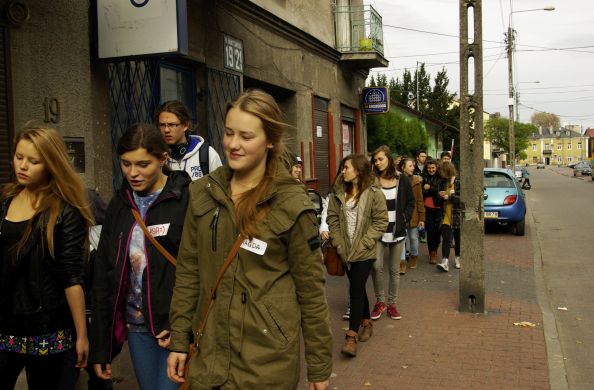 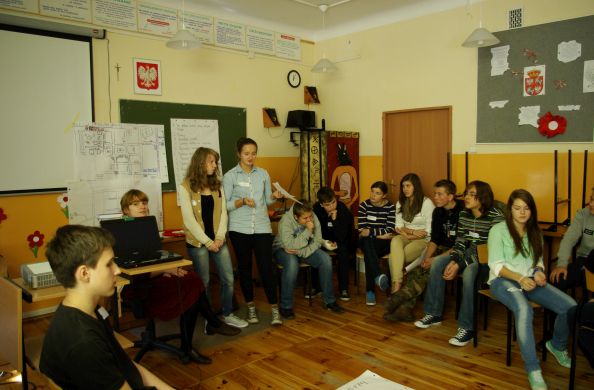 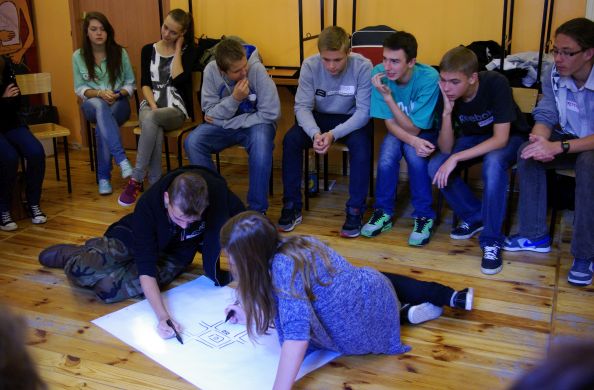 On 27 November, they invited their friends from the lower and upper secondary schools to the street game following traces of Chaja Łaja. There was no shortage of attractions. After the welcome at the school, students went to the house on Warszawska Street, where the town’s trade life flourished. Here, they saw a scene illustrating a Shabbat dinner, had to answer riddles about Jewish meals and could try the delicacies prepared for them. In the next point of the game, participants got to know the most important information about the cheder. Apart from that, they wrote their names in Hebrew and learned about the Jewish months. In the place where the synagogue used to stand, students learned about its architectural elements in an interesting and direct manner: they drew lots with terms referring to the interior of the synagogue and then had to stand where the given element used to be. Next, they all went to the school, where they learned about Jewish holidays. The final point of the game was a visit to the Jewish cemetery. Here, the participants had to match the symbols on matzevot to their meanings. Apart from that, they laid little stones they had been collecting throughout the game on the graves.

The second part of the project – the meeting at the Community Arts Centre – was extremely extensive, too.

On December 2nd, the invited guests, including representatives of the municipal authorities, inhabitants and rabbi Stas Wojciechowicz, listened to the students’ accounts of their participation in the project. The group that won the street game was presented with awards sponsored by the Jewish Community of Warsaw. Furthermore, participants watched fragments of interviews with the oldest inhabitants of Błonie and presentations on the history of Błonie Jews; they also listened to a recitation of a poem. Rabbi Stas Wojciechowicz lit a Hanukkah candle and spoke about the Hanukkah as well as the life and obligations of a rabbi. There was also a small snack: guests tucked in Hanukkah doughnuts prepared by the students. At the end, the mayor of the town took to the floor.

“We are proud of what we have achieved throughout the project. A number of students have become very involved. The most important thing happened in their heads and hearts – they opened up to the past, to another culture, religion and tradition,” is what students of the Błonie lower secondary school, winner of the 2013 School of Dialogue, wrote about their actions.

Thanks to the project I found out where buildings such as cheder, synagogue and Jewish cemetery were located in my town. It even turned out that the Jewish cemetery is very close to my home, but it is very neglected. We would like to improve the appearance of this cemetery together  – it is just as important as our Catholic one.

During the project, we began to discover ‘the Jewish Błonie.’ We discovered it for ourselves. Now we want to show it to others. We are preparing a street game, in which we are going to demonstrate that Jews also have their own history in our town.

During the 4 days of the Jewish culture project I discovered more than during 14 years of my life. I had no idea that there were so many Jews in the town I live in. They lived peacefully, had their businesses and different workshops, yet at a certain point it was taken away from them.

These meetings were a wonderful experience, but they also provided me with a number of trivia about my town and the Jewish community that inhabited it. I found out the pre-war location of the synagogue, cheder, mikveh and the Jewish cemetery – the only surviving object.

School of Dialogue program in Błonie was made possible by the support from MIRIAM GREENBAUM.