In late spring of 2016, a group of students from Bolesławiec junior high school with the help of Forum educators Adam Gąsecki and Stanisław Niemojewski uncovered the complex and not fully researched history of Jews in Bolesławiec. There was much to uncover, as first mentions about Jews coming to Lower Silesia and Bolesławiec date back to 1190. Specifically, the documents mention local townpeople who loaned money from Jewish money-lenders for the purposes of erecting city walls. Permission for settling in the town and constructing the synagogue was to express gratitude for the granted loan.

Next mentions of local Jews come from 1370; it is unclear where the Jewish district existed in the town as sources diverge. According to some, it spread from the eastern part of Jeleniogórska Street; others claim that it was located on Przedmieście Mikołajskie. Either way, what is certain is that by 1361 there were 360 Jews in the town who owned 31 homes and dealt in mostly petty commerce and trade. Ultimately, as a result of anti-Jewish actions in Lower Silesia, Jews were driven out of Bolesławiec in 1454 to come back only in the 18th century, after 300 years. The Jewish cemetery was established in 1817 at the junction of what today is Wybickiego Street; in 1870, a beit ha-tahara was opened on the cemetery premises. In 1823, the first prayer hall began to function in widow Böhm’s house at a square known as Kirchplatz, and in 1876, construction of a synagogue began at the junction of Kubika  Street and Wąska Street.

Right next to the synagogue was the Promenade and not much farther, at the edge of a pond stood the Odeon – a concert hall and ballroom. Sophisticated local residents would stroll back and forth down the promenade.

As Bolesławiec (then Bunzlau) was part of German territory before the war, economic boycotts of 1933 did not spare  the town’s Jews. After Nuremberg laws were passed, Jews would lose jobs, and during Kristallnacht of November 9, 1938, the synagogue was devastated and burnt down, while fire fighters made sure that the fire does not spread to buildings standing around. On that same night, the Jewish cemetery was devastated as well. A few surviving headstones are now located in the garden of the Ceramics Museum, while a footpath cuts across the cemetery area, with benches placed along its route.

Students talked to educators about Judaism, Jewish history and contemporary Jewish identity. They considered their reactions to this history, if there was something they could do to honor it. They translated their reflections and experience into the walking tour of Jewish Bolesławiec with some urban game elements intended for local residents.  To prepare for it, students walked around the town, searched for information in books, the Internet and among people who could provide them with some source of assistance. This way, they reached Tadeusz Łasica, a local historian, who told them what prewar Bolesławiec was like and about relations between the various groups. 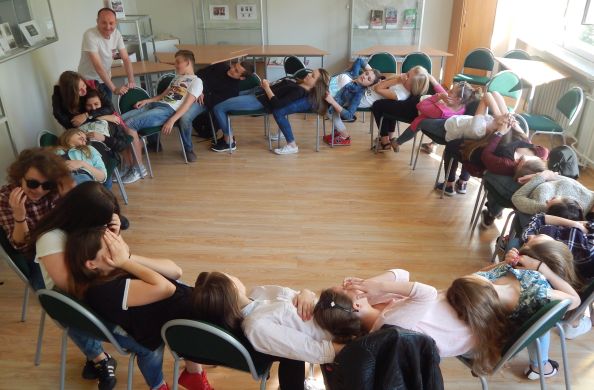 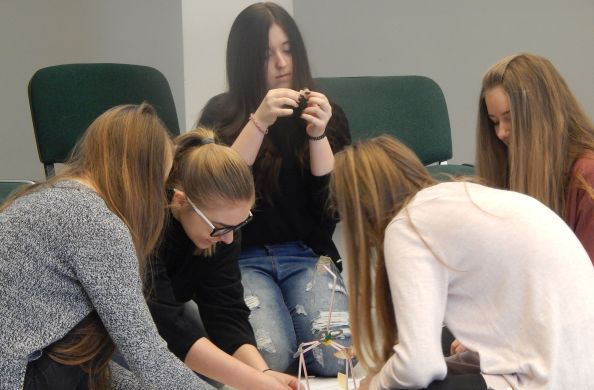 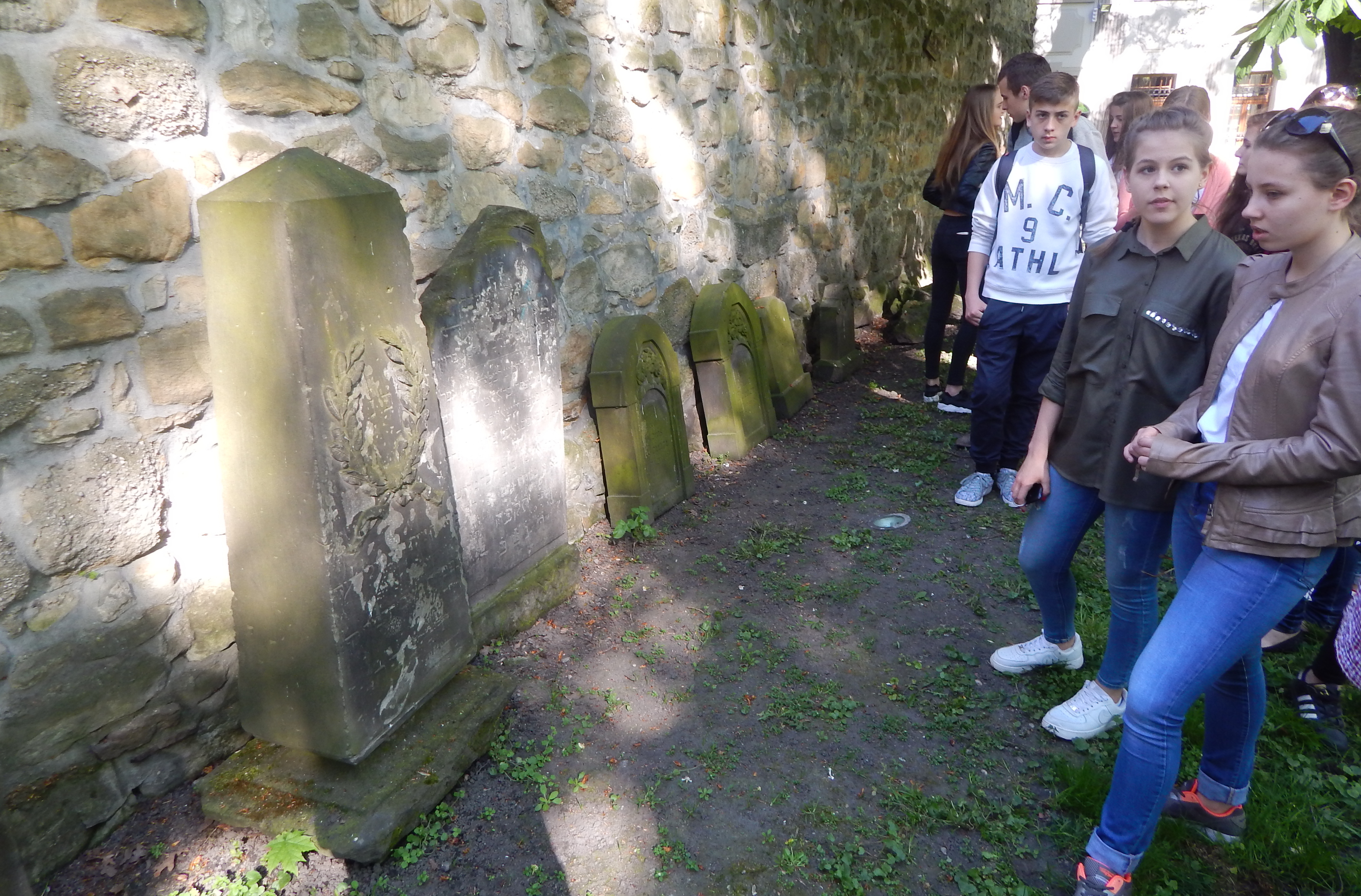 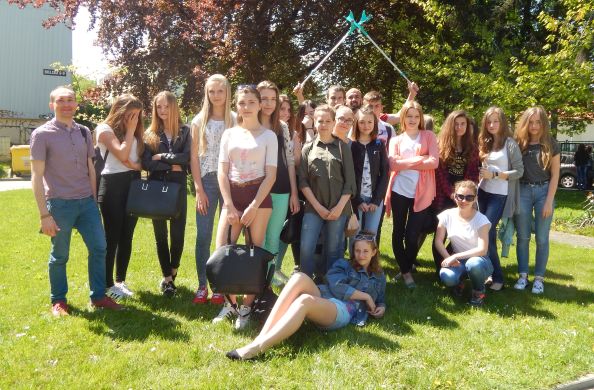 He shared some names of Bolesławiec Jews, telling them who lived where, providing exact addresses of homes, the synagogue and cemetery, as well as explaining the different occupations of local Jews. Later on, students would invite guests for their event, hang posters advertising the tour and informed the local press and the Municipal Department for Development and Promotion.

The walking tour organized by the students featured elements of a city game and was held on June 23. Participants were greeted by one of the program participants – Natalia, who explained what School of Dialogue is, what are the aims of the program and what the students involved in the project were occupied with. She also introduced the rules of the game that would be organized as part of the event.

Each participant received a yellow daffodil from the tour organizers; as students explained, the flower was to symbolize lasting memory. Later, tour participants were divided into four smaller groups that were led by separate guides. Each of the groups headed in a different direction, to a different site, where they were awaited by student organizers who would explain each site’s history and suggest tasks to perform. Each group went through all the stops.
One of them was at the Jewish cemetery, where junior high school students described Jewish burial practices and explained symbols of Jewish headstones as well as the cemetery’s history. The task at the station was a board game created by the students about the cemetery’s history.

Another station was the market square, where participants learned which tenement houses were home to Jewish merchants and craftsmen before the war.

The premises of Bolesławiec textile plant Concordia was where urban game participants gathered information about the site’s history. During World War II, the area was a sub-camp of Gross-Rosen concentration camp, where some of the prisoners were Jews.

Another station was the Museum of Ceramics, where one can find surviving headstones from Bolesławiec Jewish cemetery. Here participants were asked to translate Hebrew words into Polish and take part in a short quiz on terms connected to Judaism and Jewish rituals. All groups and participants met at the final stop – the building of what once had been the synagogue. Students presented the synagogue’s history and selected groups went on to symbolically reconstruct the synagogue from elements they had prepared earlier. After all the activities, students thanked their guests, collected feedback and encouraged everyone to search deeper for “encounters with the other and to discover the other in themselves”.

The film that documented the event was submitted to the school’s video archive and is to be used as a source during lessons in social studies, Polish or history.

School of Dialogue made me realize how important it is to learn about other cultures.

I began to understand teamwork and mutual support. Now I know that working as a group I can achieve more than by myself. I opened up.

These sessions not only provided new knowledge, but also changed by attitudes.