School of Dialogue at Krzysztof K. Baczyński High School No 2

They acquired the knowledge of a real life in the town before the War from the memories of Berek Grajower, who survived the War,they found out the symbols of the matzevahs at the cemetery, and were presented the history of local Jews by Kamil Bogusz – local museum employee. Such untypical lessons of history were attended by high school students in Chrzanów, with support of educators from the Forum of Dialogue.

During the workshops organised by the School of Dialogue, students were provided with the most important information concerning the history and culture of Jews, focused on the extensive history of their town and developed the abilities of work in a group. They were told, among other things, that in their town, Jews lived from the 16th century.  They had four synagogues, cheder, places where Jewish shops used to be and the cemetery.

They traded in precious metals, produced alcohol, were bakers, tailors, dentists. Before the War, they constituted a greater part of the population of Chrzanów. During the War, the town was incorporated into the 3rd Reich, and then Jews were relocated to the Jewish ghetto, to be eventually transported to Auschwitz-Birkenau.  Today, at the town, there is only one synagogue building. At the place where there once was the Great Synagogue, at Plac Estery, a commemorative plaque has been placed. On a few tenement houses, one can see the remains of sukkah. In one of medical clinics, we can still see mosaic tiles on the floor with the Star of David, and in the local museum one can admire local Judaica. There also survived the buildings of the former Society of Psalmists and a former secular Jewish school. There is also the cemetery with over 1.5 thousand matzevahs, two ohels and a mass grave of the people who were executed in 1939. 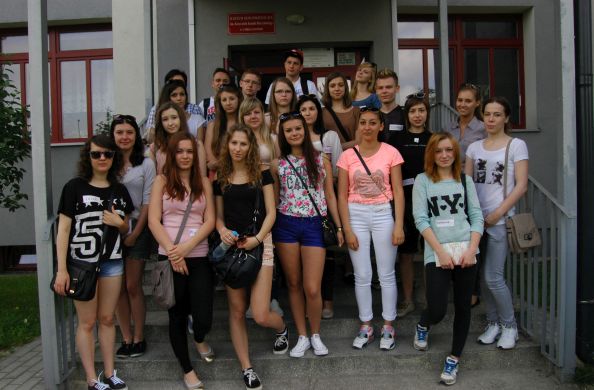 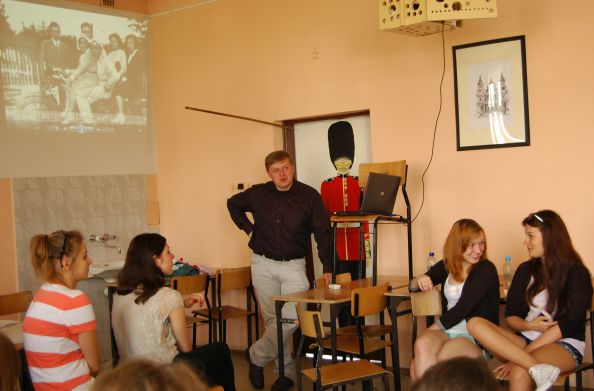 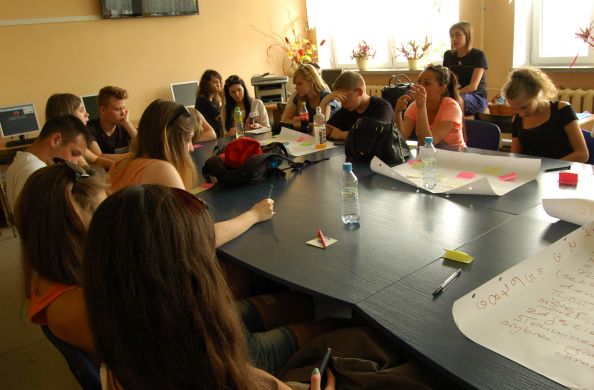 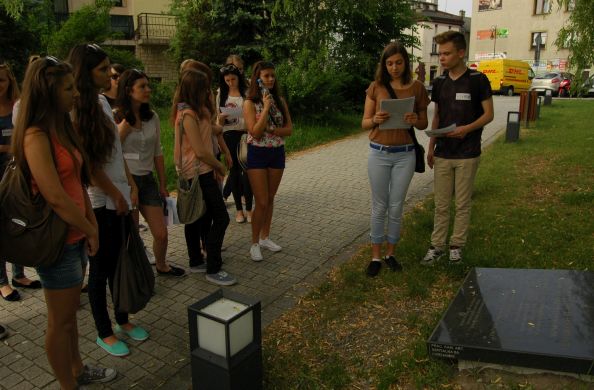 The workshops organised by the School of Dialogue contributed to the creation of a virtual guided tour around Jewish Chrzanów on the blog created by the students and the tour organised by them for their colleagues to follow the traces of Jews in Chrzanów.

They set-off on 27 June 2015, with the tour map in their tablets. The tour was to cover a part of the former ghetto, the place where the Great Synagogue was once located at Estery Square, the town market – shops and tenement house which once belonged to Jews, the former quincha of the Loewental Family (today the Mazaraki Musem, with the collection of Judaica), the Small Synagogue of Anchea Chail, the slaughterhouse, the school and the Jewish cemetery.

The students told about Henryk Loewenfeld, an owner of Chrzanów and Berek Grajower, who during his primary school days’ put sandwiches to school bags of his poorer colleagues. Despite the lack of tangible traces of the former Jewish life in Chrzanów, due to some specific individuals, the history has become somehow more and more distinct, more colourful, with some more distinct shapes. There appear other individuals who show their own history and evoke Chrzanów just as it was before the War… at least for a while, in the imagination of the high school students from Chrzanów and tour participants.

Before the workshops I would have never realized that in the town where my high school is located there are so many places and buildings connected to Jews.

During these meetings, I had an opportunity to see the town through the eyes of someone else, to  go back to the past.