The School of Dialogue at School Complex No 2

Róża was born in Ciechanów. When in 1942 she was transported to the camp in Auschwitz, she did not want to stay passive and defenceless. She contacted members of Jewish conspiracy and jointly prepared the plan to blow up one of the crematories. Women who worked in an ammunition factory, took with them small amounts of gun powder hidden under their fingernails, in small bags on the internal side of their dresses and inside their head scarves, and Róża passed them further on to the Sonderkommando members. After over a year of preparations, the explosive charge was ready. On 7 October 1944, the crematory no 4 was blown up. Germans did not manage to reactivate it. However, they succeeded in reaching conspiracy members, women predominantly, who took the gun powder out of the plant. Despite brutal investigation, tortures and injuries, Róża did not betray other members of the resistance movement. She was eventually hanged a few weeks before the camp was liberated.
The story of Róża Robota, who is considered all around the world a symbol of brave resistance and fight for human dignity, has been unknown in Ciechanów till recently. Only an unpaved little street in her home town is named after her.

Today, the story of Róża is told by students from the School Complex No 2, when standing at the site where her house was 70 years ago. 30 people, being students and invited guests, are listening to her story. In a while, participants of the march will go along Warszawska Street, where during the War there was a ghetto in which Róża’s family lived from 1940 to 1942. The March of Memory is an event independently organized by participants of the School of Dialogue program.
The stop at the site of the former house of Róża Robota and the one in Warszawska Street are the first points of the walking tour following the footsteps of Jews of Ciechanów – a tour organized under the School of Dialogue. Jews already lived in Ciechanów much earlier, as from the 16th century, and in the 19th century they even constituted the majority (62%) of its population. They mainly dealt with trade and craftsmanship, they owned inns and taverns. There were a dozen or so cheders and a wooden synagogue in Zakroczymska Street. The tour participants are heading for the Market Square. In this part of the town, i.e. in the Market Square, and in Żydowska, Warszawska, Zakroczymska and Pułtuska Streets there once lived Jews. 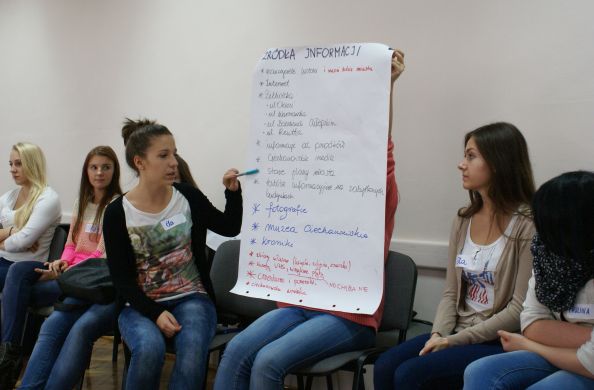 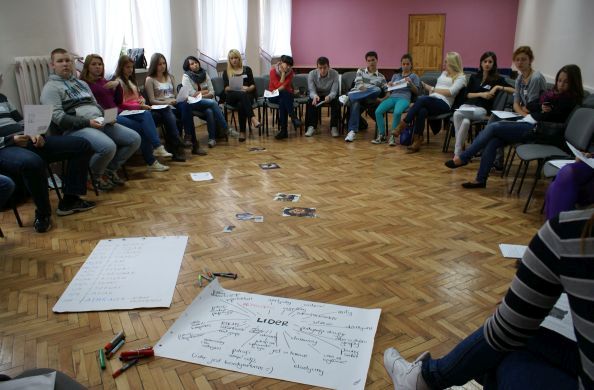 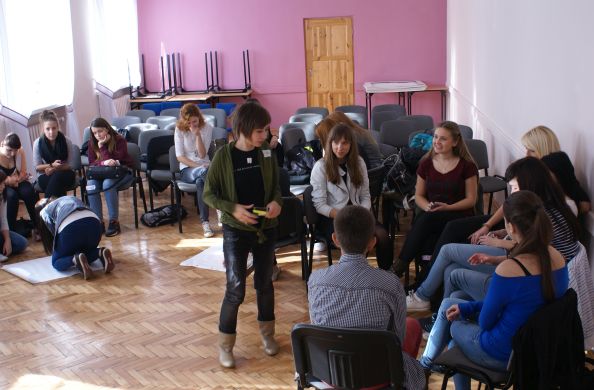 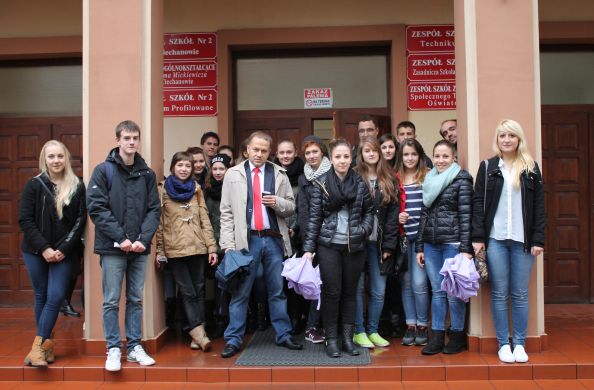 The march continues to finish at the new Jewish cemetery where there is a monument with inscriptions in Yiddish and Hebrew: “Here rest the ashes of the Jews murdered by the Nazi in Ciechanów. Honour their memory!”
When preparing for the walking tour, the students found archival photos and information. They referred to the Yizkor Book of the Jews of Ciechanów, historical studies and articles in press. They used recollections of the older generation of the town residents, as well as the guidance of Mr Mariusz Bondarczuk, the town historian, who met them during one of the workshops organised by the School of Dialogue. The students also visited the Museum of Mazovian Gentry which houses the exhibition devoted to the Jewish community in Ciechanów, entitled “The Lost World. Traces of Jewish families until 1942”.
Surprised by the long history of Jewish tradition in Ciechanów, the students conducted a street survey to figure out what people living in the town knew about its history.

“Many town residents have no idea of the fact that the Jewish population in our town was numerous”, says one of the participants of the School of Dialogue program. Are the Jewish residents forgotten because of the failure to commemorate several sites connected to them? One of the students says: “We have organised the tour during which we have visited many sites. Unfortunately, it has turned out that none of them were commemorated in any manner whatsoever. It is sad as the majority of the residents of Ciechanów live in ignorance of these facts. They do not know the history of their town and they do not even make any efforts to learn it. I am very happy that I have had an opportunity to participate in the workshops. It has stimulated my curiosity and inspired to further actions. I do believe that we should not leave it as it is now. We have to pass the knowledge we have just acquired. I would be wonderful if we could raise awareness among all the residents of Ciechanów.”
After the tour, the students suggested that the authorities of the town should be requested to commemorate, even symbolically, the sites related to the history of Jews from Ciechanów.

I found out a lot of interesting facts about their [Jews] daily life, customs, culture. It was also said that Ciechanów was the town were there lived a lot of Jews and that if it had not been for the past events which departed us, we would still be neighbours.

It is my strong desire to personally meet a person of Jewish origin who once lived in Ciechanów and whose former life was in any way related to the town. We do still need people who can make us aware of how similar we are. We are just people who were severely affected by the War…

Many people living in Ciechanów are not aware of the fact that there was numerous Jewish population living in our town. They attended schools, sold various goods…  Due to the tour covering the most significant places related to Jewish culture, e.g. the cemetery or the synagogue, we found out a lot of interesting information.

I am truly fascinated by Jewish culture and tradition. I am also happy that I could find out about Jewish history. Now I can perceive life differently.

Project was co-financed from the funds granted by The Pratt Foundation.