School of Dialogue at Walerian Łukasiński High School No 1

Dąbrowa Górnicza is located in the Silesian province and has 120,000 inhabitants. Up until the 17th century, it was a small settlement, but upon the discovery of coal reserves, it started to develop into an industrial and mining town. The beginnings of settlement of Jews in the town date back to the 19th century. In the interwar period there were two Jewish schools and several political parties operating in Dąbrowa Górnicza. Chasidim represented a large proportion of the community. Before the outbreak of the World War II, in 1931, Jews constituted 14% of the town’s population. Between 1941 and 1943, Germans set up a ghetto in Dąbrowa Górnicza. Upon its liquidation, Jews were transported to Auschwitz-Birkenau concentration camp, where Germans murdered them. Today, the locations of the synagogue (the intersection of Okrzeja and Szopena streets), Community House (3 Maja Street), the cemetery (Ludowa Street) and the ghetto (the area of Chopin, Polna, Barlickiego, Łukasińskiego and Okrzeja streets) are known. The plaques commemorating the extermination of Jews from Dąbrowa Górnicza were put at the cemetery and on the building of porter’s lodge of former wire manufactory.

Workshops led in September and October by Forum for Dialogue educators, Szymon Gotowski and Jagoda Szkarłat, were an important event for the students. “These workshops brought a lot of new things into my life and changed my viewpoint on people, national and ethnic minorities. I understood that skin color or different religion should not stand in the way of tolerance. Because it is not important whether you are black or white, Jewish or Christian – you are a human being. This is the common feature that connects us and we should see another human being through it,” one of the high school students said. Another student added, “These workshops are not a boring class, but a way of discovering different skills and acquiring real life values.” When working on the project, students showed a lot of curiosity. They invited curators, employees of the Municipal Museum “Sztygarka”: Magdalena Cyrankiewicz, Jarosław Krajniewski, Joanna Tokaj, and Dariusz Rozmus, PhD, to their school. The guests talked about the history and culture of the Jewish community in the area of Zagłębie Dąbrowskie. 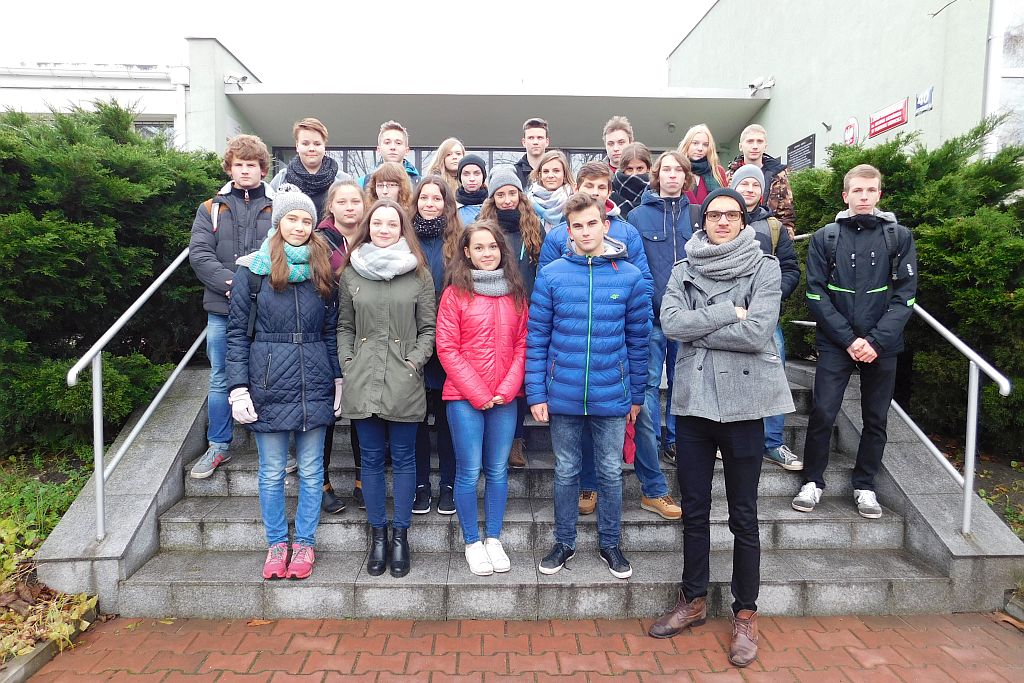 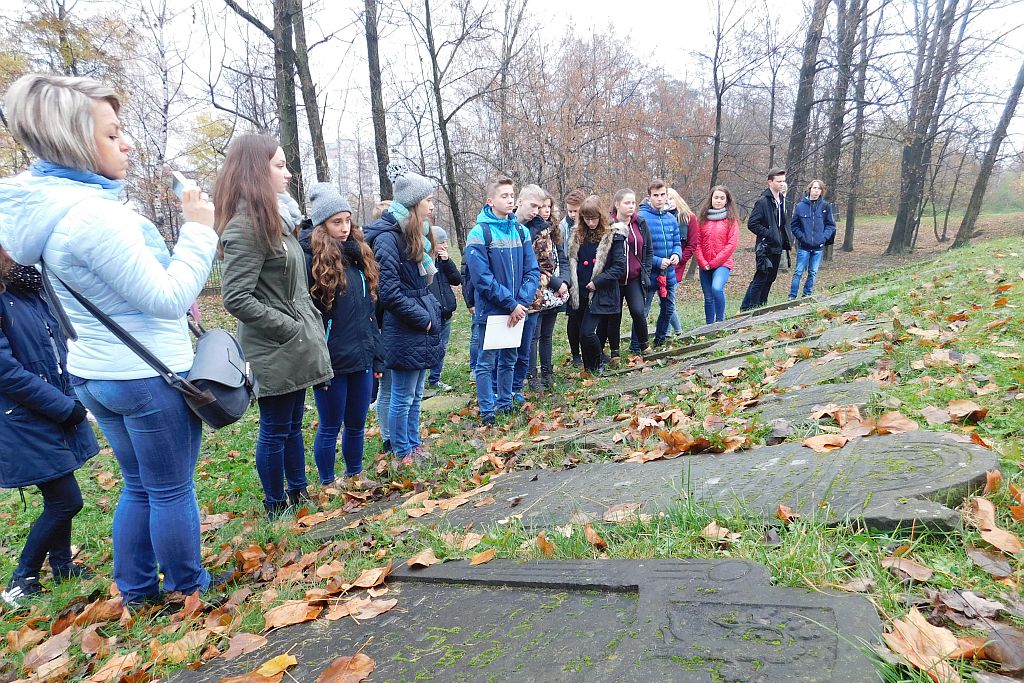 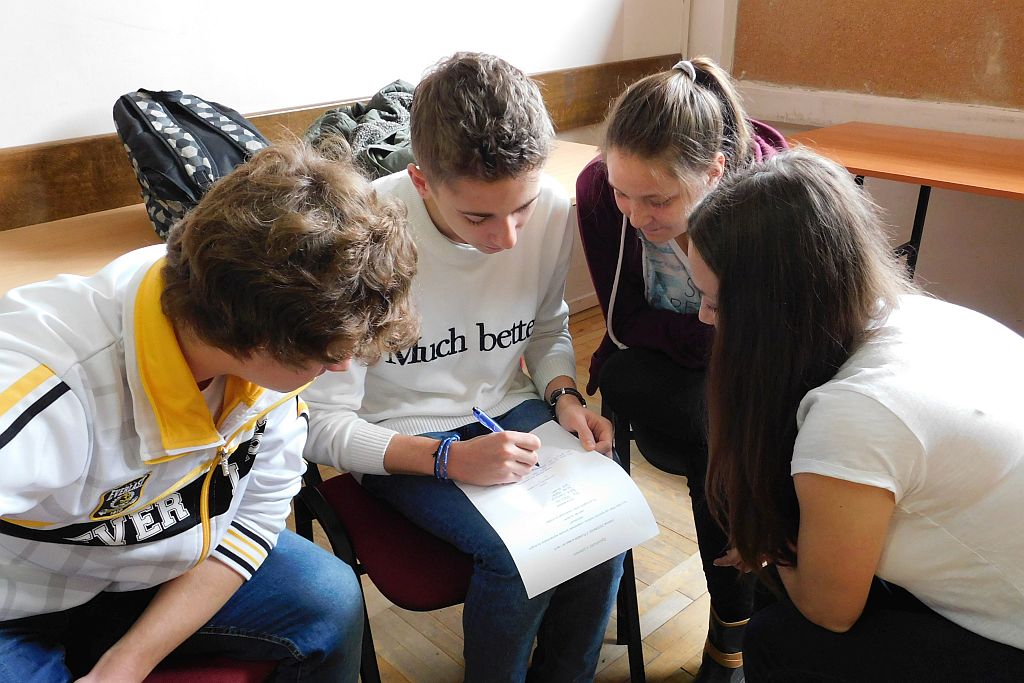 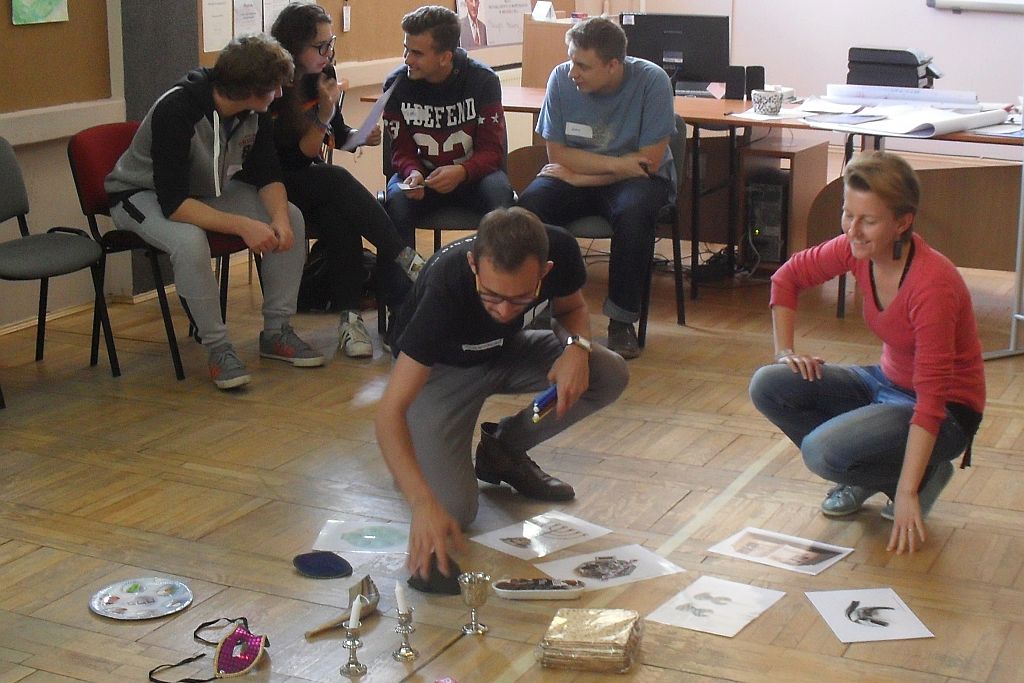 The high school students searched for additional information in libraries, they also talked to the witnesses of history – Henryka Orzeł and Zbigniew Majeranek. The students also took part in a project named KROKUS (organized by the Jewish Museum of Galicia and Holocaust Educational Trust Ireland). They planted flowers in front of the school building to commemorate half a million of Jewish children and thousands of children of different nationalities murdered during the Holocaust.

In preparation to the final event, the students cleaned up the cemetery, hanged posters and made tour guides with information about all sites included in the walking tour. On December 2, they invited friends from a neighborhood junior high school to a location-based game following the footsteps of Jews from Dąbrowa Górnicza. In front of the Zagłębie Palace of Culture, the students talked about the most important facts from the Jewish history of the town.

The junior high schoolers had a task to solve a quiz. On 3 Maja Street, where the Community House once stood, the students learned about the Jewish culture. They also solved puns presenting the Star of David, the flags of Israel and the Torah. At the following stop they were introduced to the history of the synagogue of Dąbrowa Górnicza and practiced writing Hebrew letters. The last stage of the game was a visit to the Jewish cemetery. Here the participants searched and explained the symbols on the matzevot. “We learned a lot of new information about the Jewish culture, while having a lot of fun,” one of the junior high students summarized the event.

High school students did not stop at just the tour. They made a film depicting their participation in the project, which also included interviews with the witnesses to the history and employees of the Municipal Museum “Sztygarka”. Moreover, they recorded an audio book to present the Jewish heritage of their area.

The project referred mainly to the dialogue between us, the teenage inhabitants of many Polish towns, and history.

I am happy that thanks to a feeling of close contact with the Jewish culture, it is no longer so distant and unknown to me, but something real and ‘familiar’.

I had an opportunity to learn a lot about the Jewish community and meet its culture based on my town and the area.