School of Dialogue at High School Complex No 1

The biggest synagogue in Małopolska: two slender towers on the facade, semi-circular windows, and inside the paintings by Italian artists presenting Biblical scenes, zodiac cycle and views of former Jerusalem. Jews prayed at this synagogue from 1865. Before, they used the wooden synagogue as they lived in Dąbrowa Tarnowska from the end of the 16th century. In the 19th century, they constituted 80% of the whole population. There was the Jewish cemetery, the cheder, including Yeshiva from 1908. During the 2nd World War, the Germans deported some Jews to labour camps, whereas the others and people removed from nearby villages where grouped in the ghetto established in the east of the town. There soon began deportations to the concentration camp in Belzec, and Jewish people were executed by firing squad at the Jewish cemetery. Some of them tried to hide in the nearby forests. It is estimated that 50-150 Jews from Dąbrowa Tarnowska survived the War to flee Poland just after it was over or in 1968.

The synagogue deteriorated for several years; but, in 2012 it underwent reconstruction and is now the office of the Centre of Meeting of Culture.

Mr Paweł Chojnowski, the Director of the Centre, meets today participants of the workshops organized by the School of Dialogue.

During four meetings with educators from the Forum of Dialogue, the students discovered Jewish past of their town. They became familiar with Jewish holidays, fate of Polish Jews during and after the War. “I must admit that I liked the workshops very much. Mostly, because I had an opportunity to have a closer look at the history of my town” – says Aśka, one of the workshops’ participants. Mr Chojnowski, a guest invited for the last meeting, told about filing documents and archives concerning Jewish heritage, assisting descendants of local Jews with looking for traces after their ancestors, educational activity pursued by the Centre. He encouraged pupils to get involved in promoting knowledge of the Jewish history of Dąbrowa Tarnowska as volunteers. 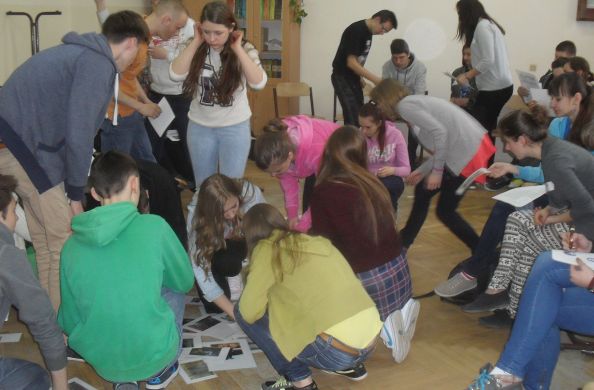 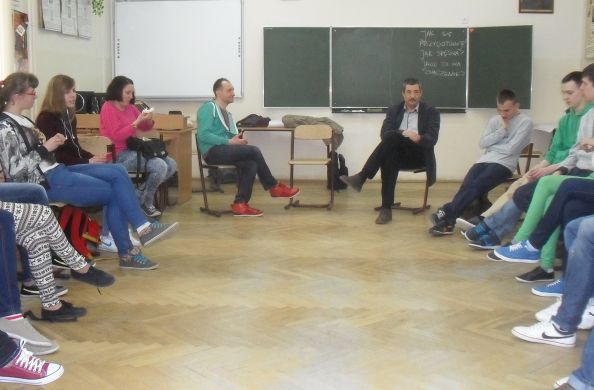 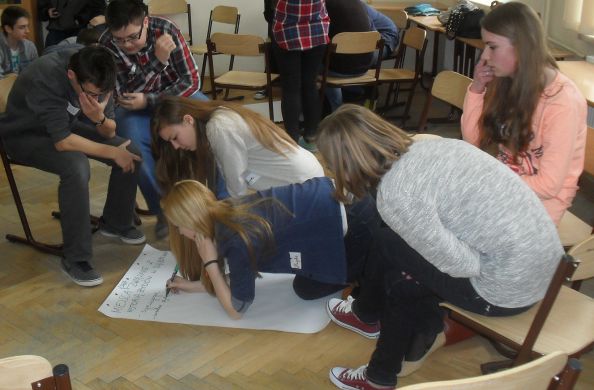 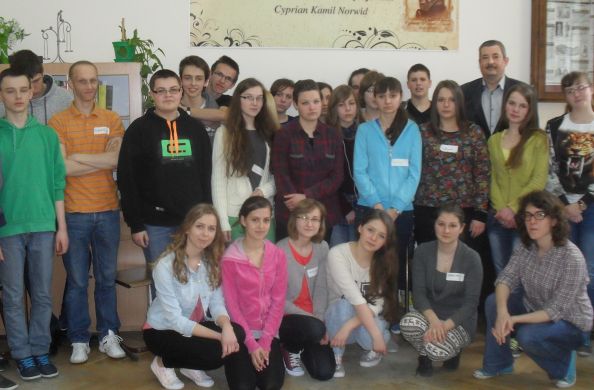 A month later, the pupils from Tarnów, inspired by the workshops organised by the School of Dialogue, invited their colleagues from the school to follow the trails of Jews from Dąbrowa. The tour covered the renovated synagogue in Berka Joselewicza, a former shtiebel operating during the years 1972-1995 at the apartment of the Roth Family, at Daszyńskiego 8, today the Jewish Memorial Hall and the Jewish cemetery with remaining approximately 150 matzevahs, Chassidic ohel, mass graves of the people executed during the Holocaust and monuments which commemorate these events.

During the tour, they also played the wedding scene which was a great attraction of the entire event.

After they returned to school, there was a quiz conducted to sum up the knowledge conveyed during the tour.

“The Jewish culture is no longer a secret to me, but a drawer in my mind full of information” – says  one of the participant of the School of Dialogue in Dąbrowa Tarnowska, and her friend adds: “We do want to contribute to break down the wall which was built after the War between us, Poles, and Jews; that is why this project proves so important to us”.

I do believe that when participating in the project, we can learn tolerance, acceptance, organisation and willingness to acquire knowledge.

I have learned that in order to create something we need many people, we need to cooperate and accept one another.