School of Dialogue at Władysław Jagiełło High School No 1

“Meeting Beata and Adam changed us, our perception of the world, our town and our history”, said students from Dębica about the workshops organised by the School of Dialogue. Meetings with educators gave them an opportunity to discover the Jewish history of their town that they had hardly known before.

And this is truly a long history, as the Jews lived in Dębica as early as in the 17th century. During the partitions, the town was annexed by Austria, and became part of the famous Galicia. At that time, all tenement buildings at the market square were owned by Jews. There was a Jewish inn, Leib Hauser’s printing shop, Bross textile shop, Dreszer’s shoe shop, and the famous Goldman’s hotel. At the market square, there were wooden stalls where various merchandise was traded. Before the World War II, Jews constituted approximately half of the town population. In 1941, the Nazi established a ghetto in Dębica, with approximately 12,000 people gathered there. The majority of them were exterminated in Bełżec or Pustaków. But some of them survived due to a heroic attitude of people, like the Families of Mikołajkow or Kuroś, who hid Jews against the Nazi, despite an announcement hanged in the town stating that “Anyone who fails to turn in a Jew hiding in against the Nazi, will be sentenced to death by firing squad”.

There is the synagogue preserved in Dębica which today is a market place what causes quite significant controversies; a well-maintained cemetery with approximately half thousands of headstones and Jewish houses in Wielkopolska Street. There are still two very special buildings there; one of them housed the Gestapo headquarters, and the other one, in the distance of 50 metres, was the house of the Mikołajkow Family.

At one of the workshops organized by the School of Dialogue, the students met with Mr Arkadiusz Więch, a historian and author of a monograph concerning social life in Dębica in the 19th and 20th century. The guest explained historical complexities related to the Jews in Dębica, talked about a method of critical examination of sources and introduced Mrs and Mr Henryka and Tomasz Kuroś who were awarded the title of the Righteous Among the Nations. Students independently contacted Mr Ireneusz Socha, a musician who refers to Klezmer traditions, a translator of “Księga Dębicy” (“Sefer Dembitz”). When working on the tour following the footsteps of the Jews from Dębica, young researchers of the local history used various sources, i.e. the websites, libraries; they also visited the Regional Museum with a collection of Judaics. In addition, they conducted a video survey among teachers concerning Jewish history and culture. 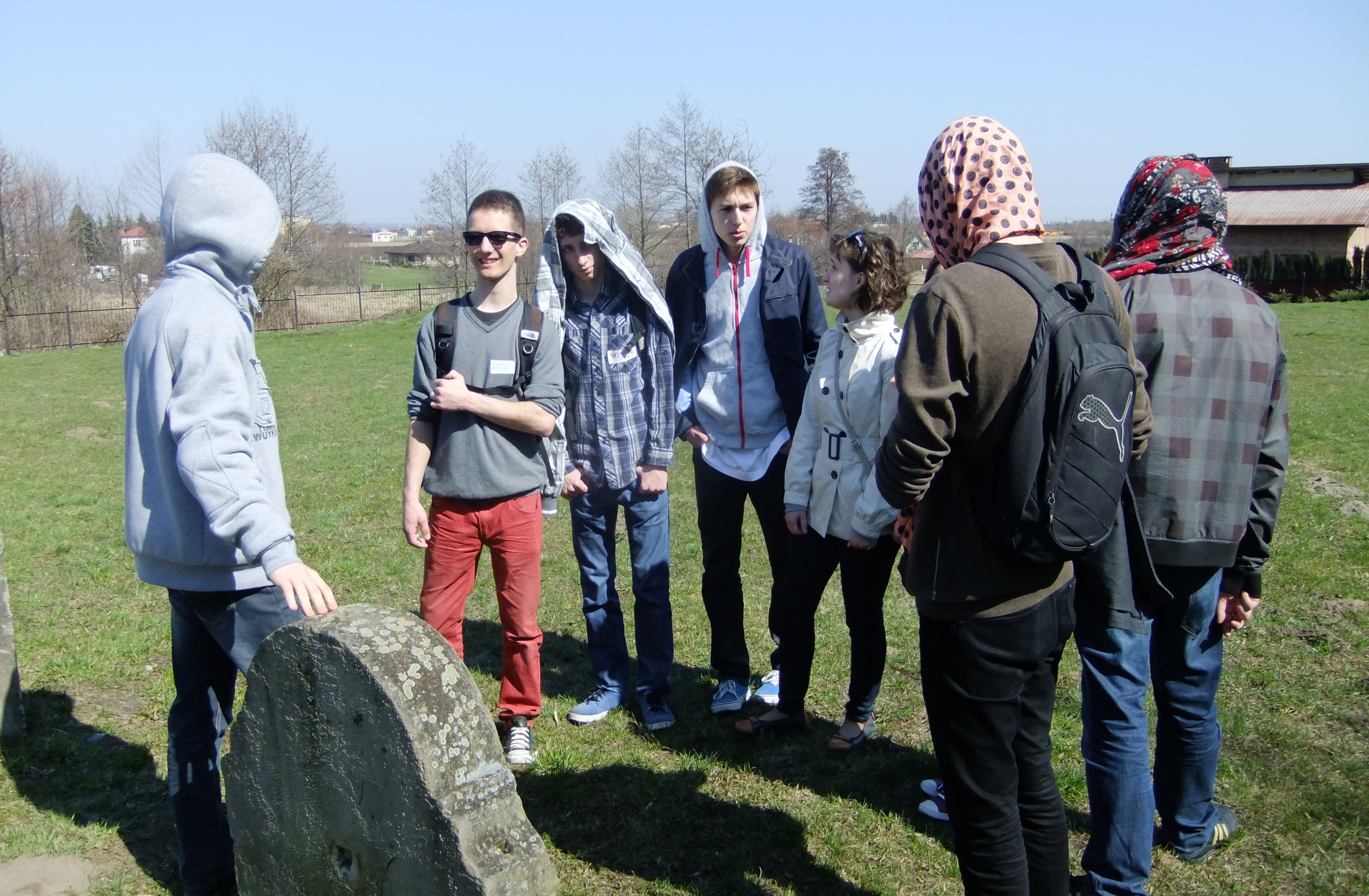 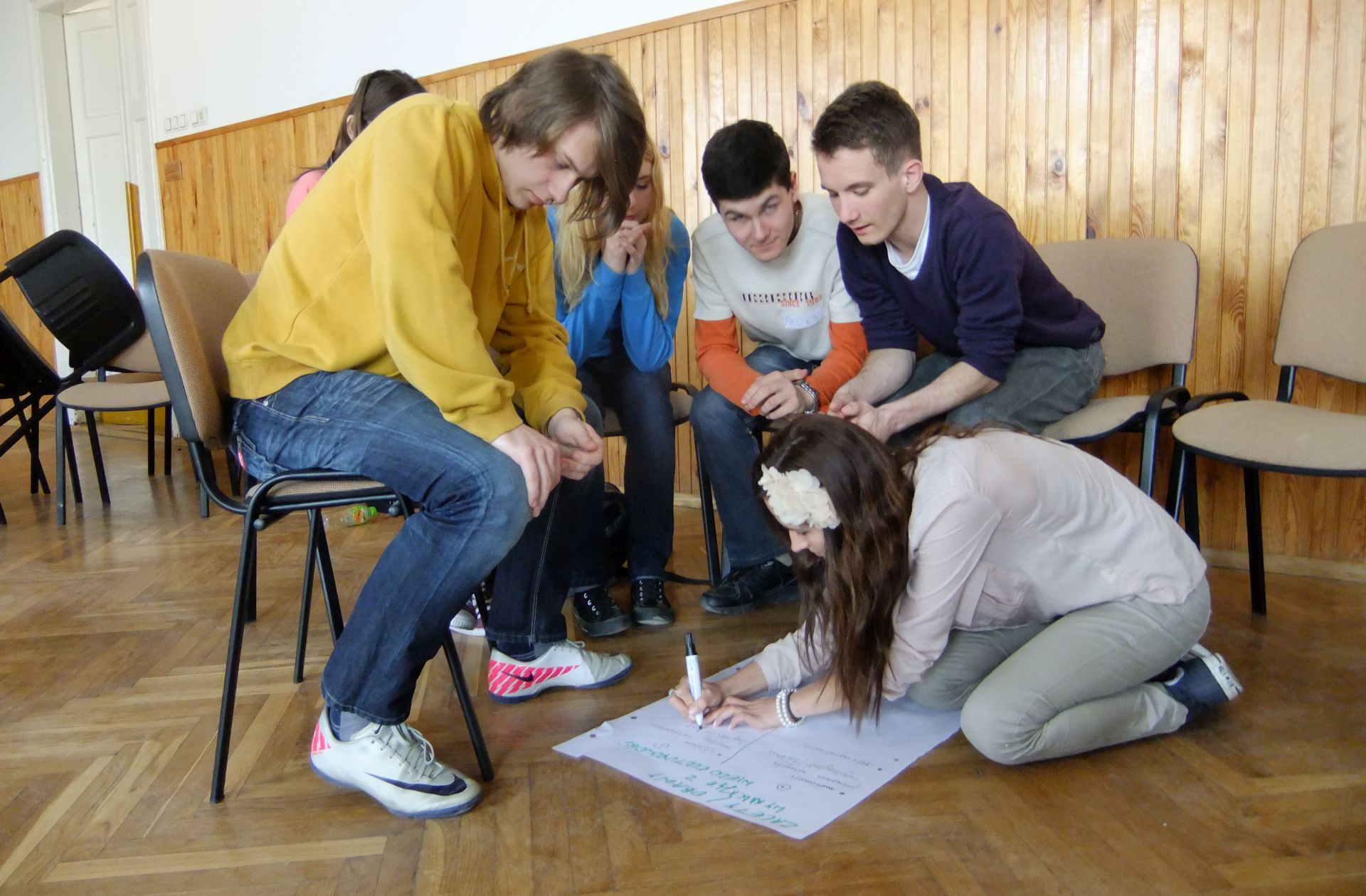 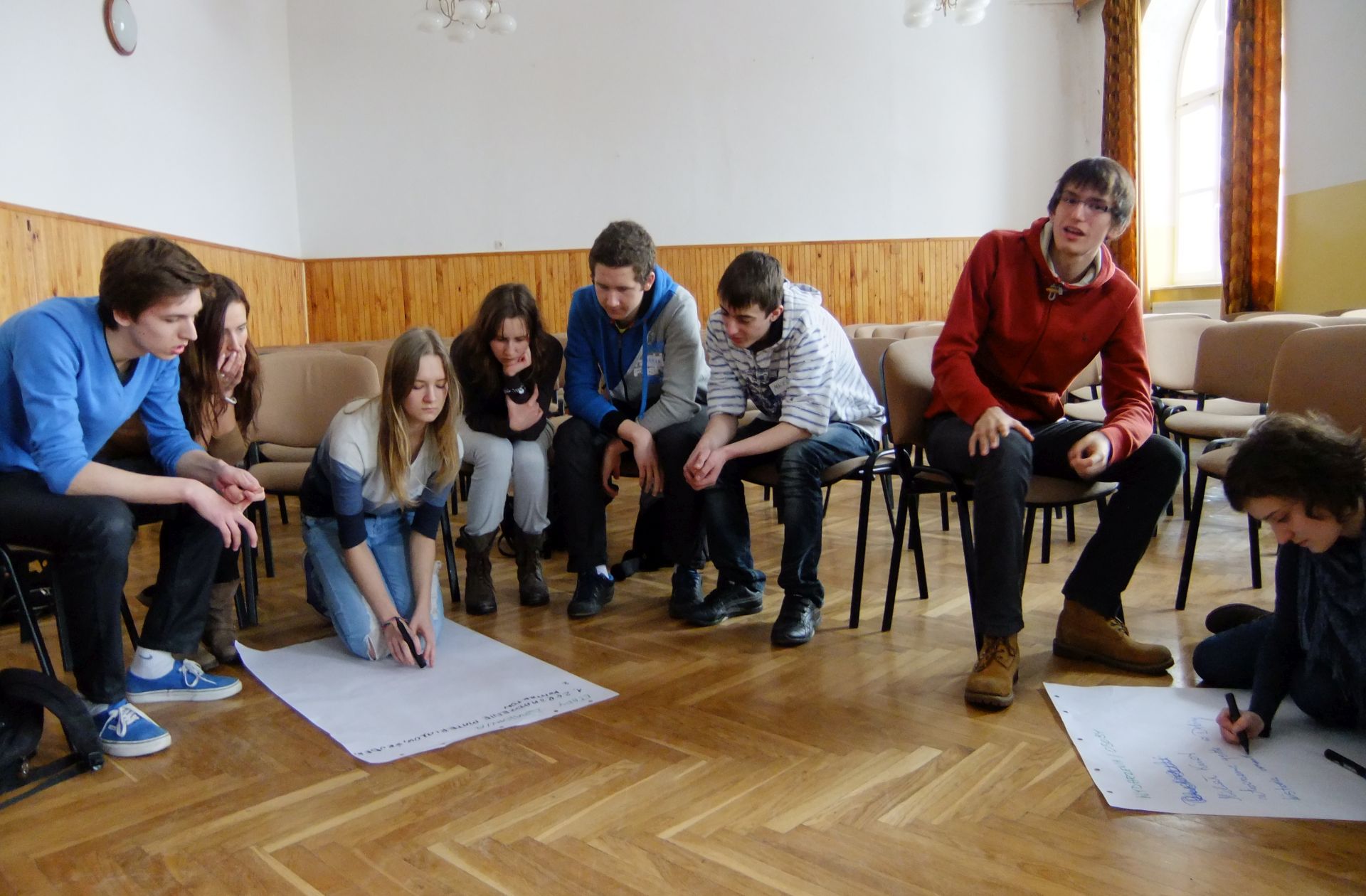 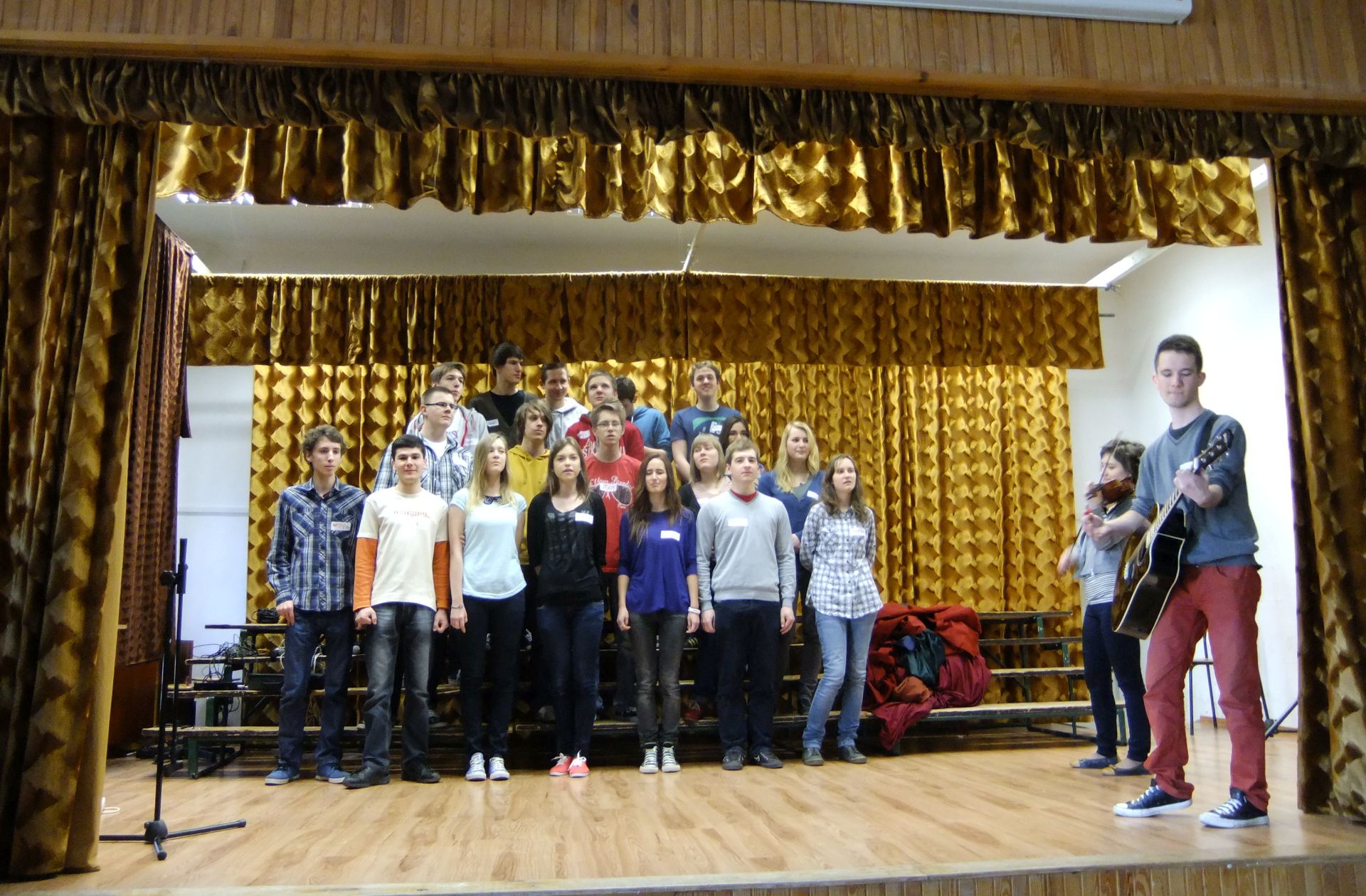 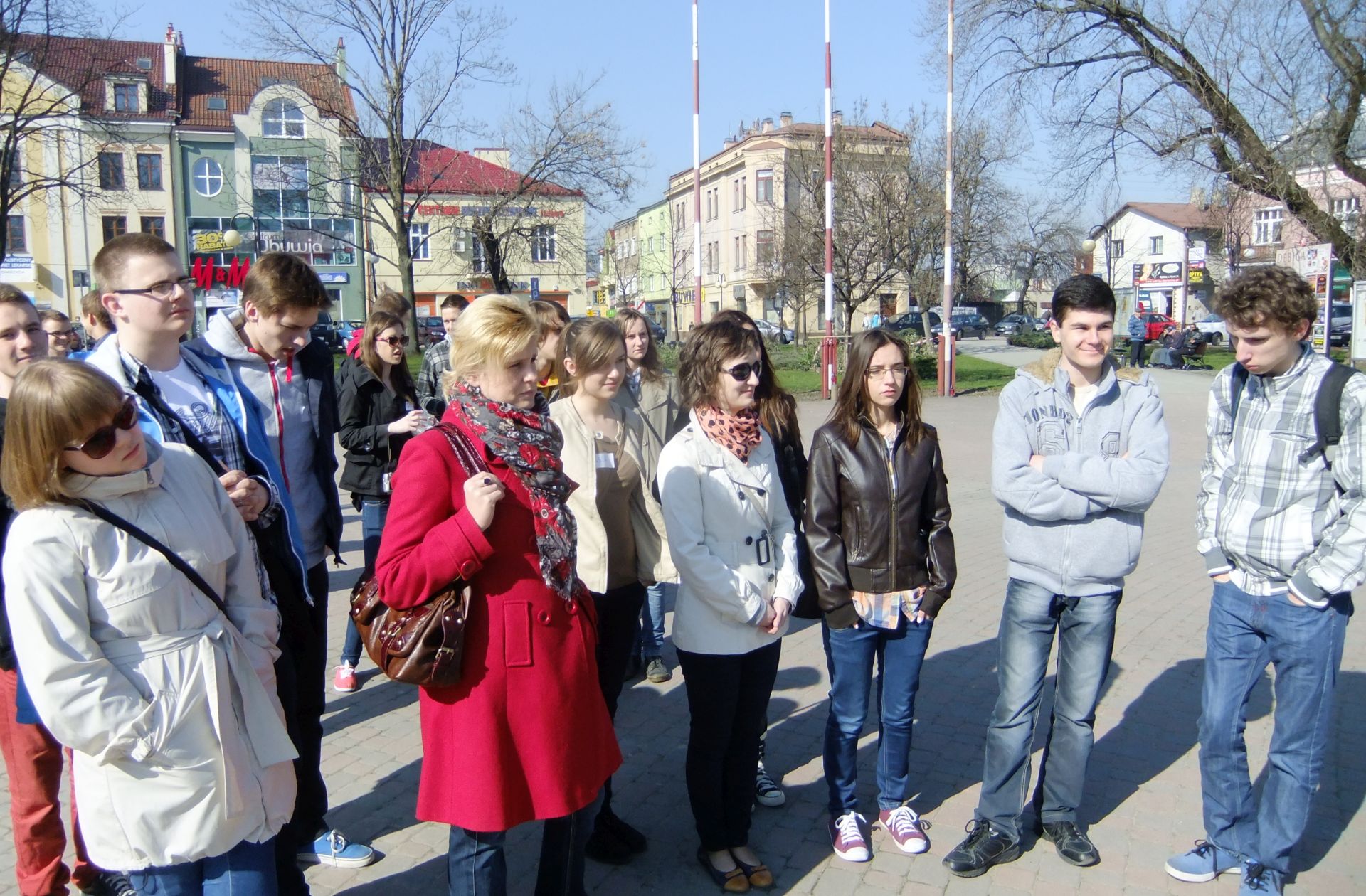 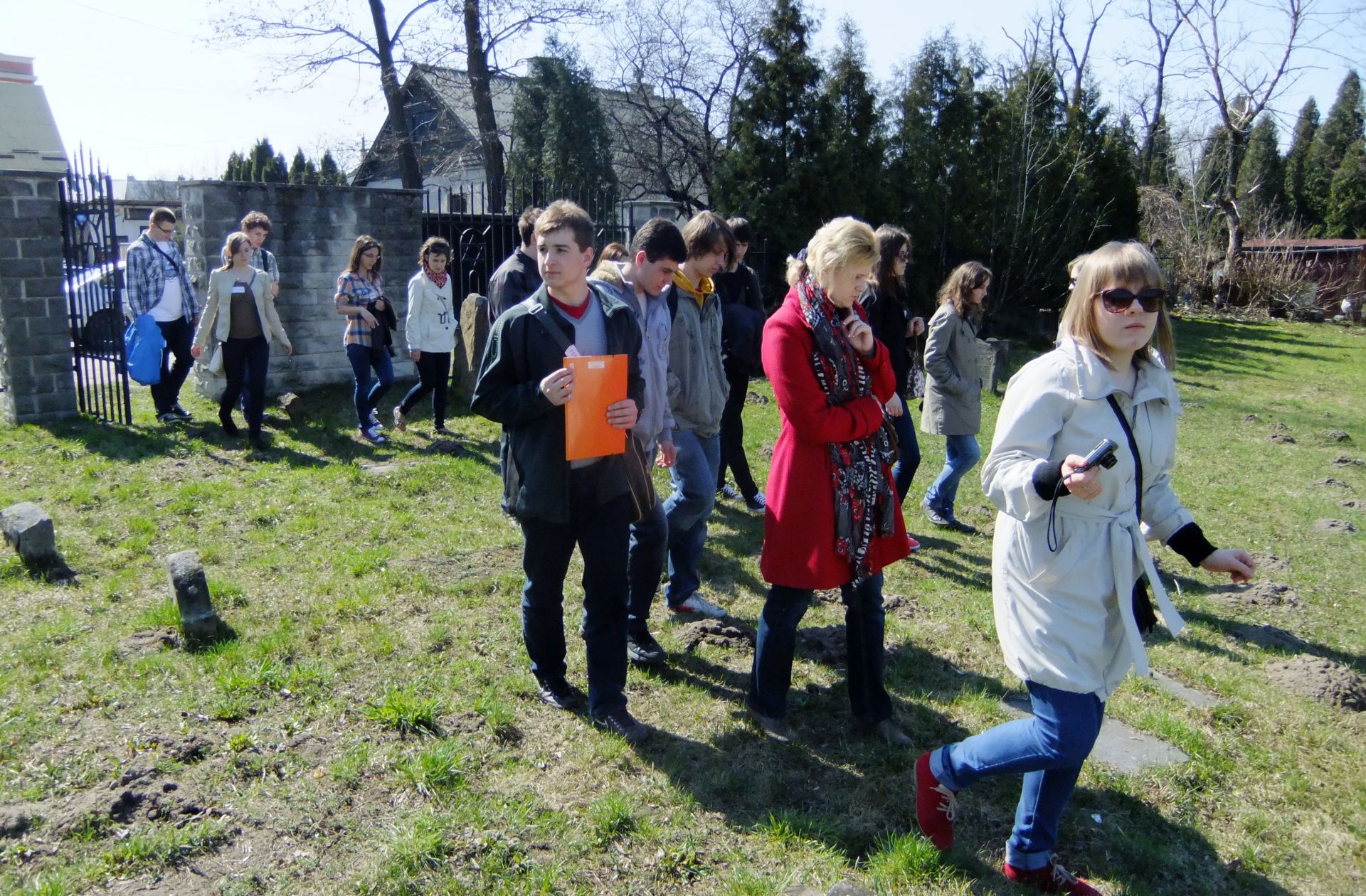 The tour was organized in May and the high school students invited their younger friends from the junior high school. They commenced at the school’s music hall with the choral chant “Havla Nagila”, and then they became tour guides. The tour covered the synagogue, the market square, the Jordanowski Park, where there was a ghetto during the War, the house which was once owned by the Mikołajkow Family, the Gryfit Square, which was once the town centre, and the cemetery. The tour participants could also listen to, among other things, the story of two families awarded the title of the Righteous Among the Nations. On the big boards, the tour organisers presented copies of old photographs of the synagogue and its fittings, copies of shop receipts from before the War or a diploma of the Righteous title awarded to Mr. Kuroś.

After the tour, students did not finish their activities. “During the last month, we significantly broadened our horizons concerning the surprising past hidden just around the corner. It is outrageous that so little is told about it, despite relevant sources available at our fingertips”, said one of the project participants. This is why the high school students prepared the map with the walking tour and published a mini-guide with the help from the local government: “The School of Dialogue. The educational walking tour following the traces of Poles and Jews living in Dębica”. As it is stated in the introduction, the students would like to encourage “to find out about the past and rediscover the places which we sometimes pass indifferently.”

I would like to encourage you to participate in the program, as some of us do not know the meaning of the word “Jew” and use it in colloquial speech to insult other people.

Due to the project, you will find out to what extent Jews in Dębica were discriminated and meant nothing before and during the War. Fortunately, there lived also people like the Mikołajkoów Family who helped them and saved their lives.

For this incredible experience, we could broaden our horizons concerning not only Jews, but also our surroundings and it made us more sensitive to the fact that despite cultural difference we are all equal and should respect each other.

The competition will be a test of our perseverance, and cooperation and interaction among individual members of the group. This experience is required in life of a young person, as it makes the daily routine more varied and allows to open to the world.