School of Dialogue at St. John of Dukla School Complex No 2

“We Lived Together for Centuries” read the title of Dukla high school students’ final project for School of Dialogue program. For years, Jews had constituted the majority in the town, with first Jewish residents settling in Dukla at the turn of the 16th and 17th centuries. In mid-18th century, the Jewish community started to rapidly develop – an independent Kehilla was established, a cemetery was opened and a brick synagogue was built on the site of the old wooden one. In early 19th century, Jews comprised 51,1% of all residents, while at the turn of the 20th century it was already 79%. Not unlike many other towns in the region, Dukla had a considerable population of Hasidim. On September 8, 1939, German troops entered the town; its residents were pushed back to the Soviet occupied zone on the other bank of San river. However, most of Dukla’s Jews remained in their homes and in 1942, the town’s ghetto had 1,600 inhabitants. In August 1942, Germans began to liquidate the ghetto. Around 2,000 Jews were deported to Bełżec death camp, while local community leaders were taken to the slopes of Błudna mountain and executed onsite. The remaining 200 male Jews were resettled to the area around the synagogue and then sent to work in road construction or quarries. In December 1942, they were transported to the ghetto in Rzeszów and murdered there.

Thanks to workshops conducted by Forum for Dialogue educators and their conversations with local residents, students gained new insights on the Jewish history of their town.

“In the course of the interviews we conducted among our neighbors and friends, we heard many stories and anecdotes that were completely new to us. The workshops taught us to be more tolerant and to work together, which we forget to do in our everyday life” stressed one of the participants. In the course of the sessions students were particularly interested in topics related to tolerance and discrimination.” “These workshops taught us not only about Jews and Dukla, but also how to be tolerant to other religious and national groups” said Monika, another participating student. The group attended a meeting with Jacek Koszczan, president of Shtetl Dukla Association for Preservation of Jewish Heritage in Dukla Region, who presented the town’s history through stories about buildings and people connected to them, showed students prewar photographs and documents. Additionally, students watched a film about the history of local Jews called “Why?” (“Dlaczego?”) and visited Dynów to participate in a ceremony commemorating Holocaust victims and Rosh ha-Shana celebrations in the Center for History of Polish Jews and the synagogue.

For their final project – a walking tour – students prepared a multimedia presentation entitled “We Lived Together for Centuries”. Unfortunately, bad weather made it impossible to conduct a walk through the town, so on December 11 students welcomed their guests in the school’s event room. Audience members included representatives of the local authorities and historical institutions, teachers and students’ families. 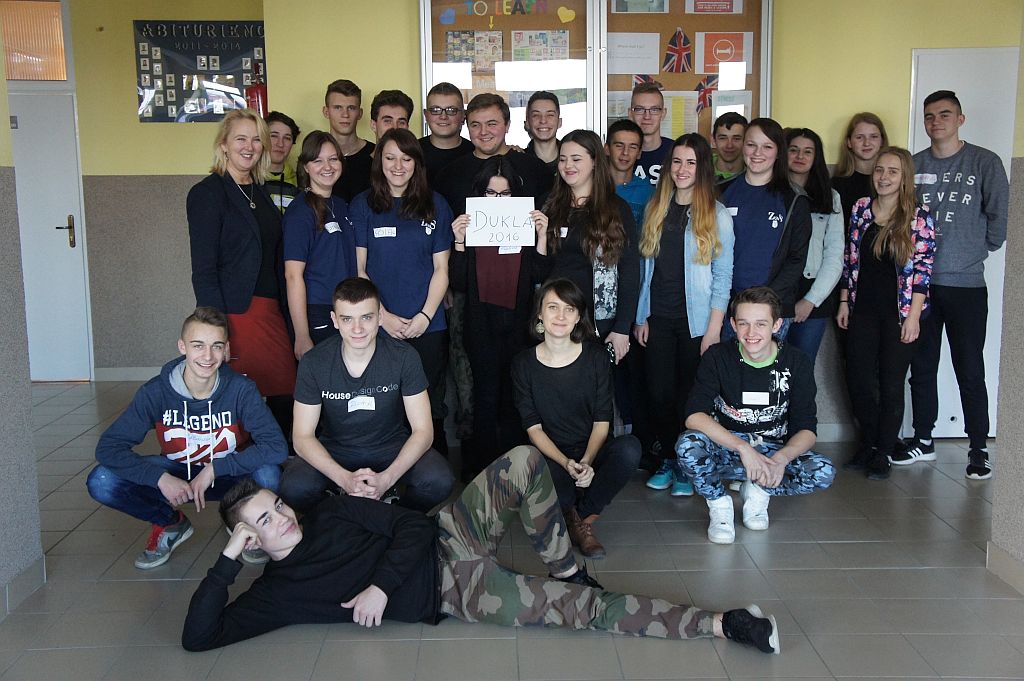 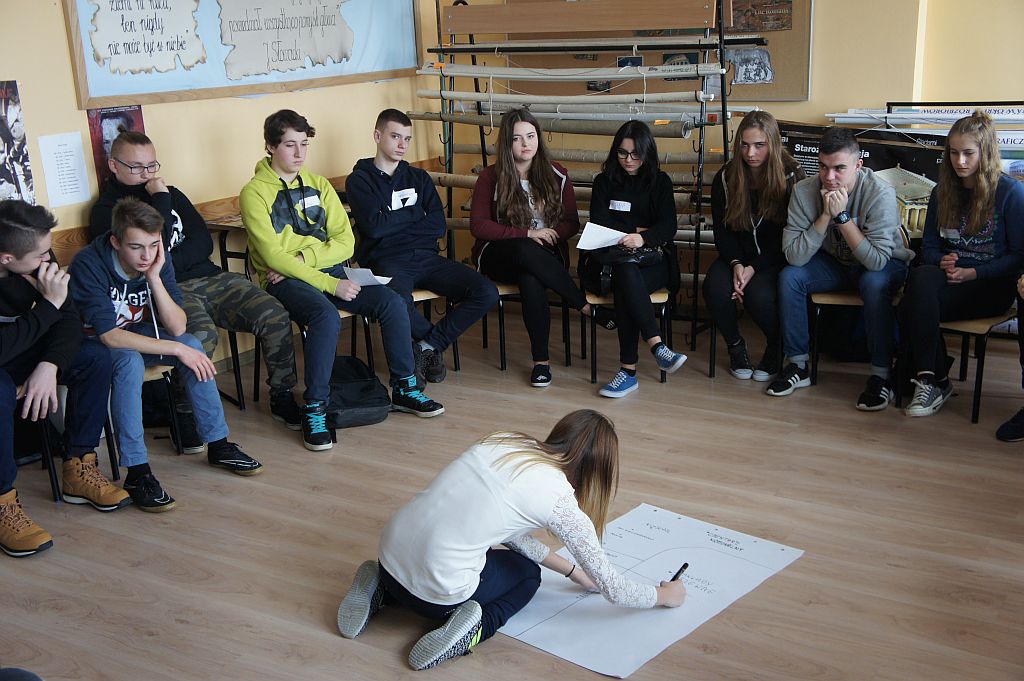 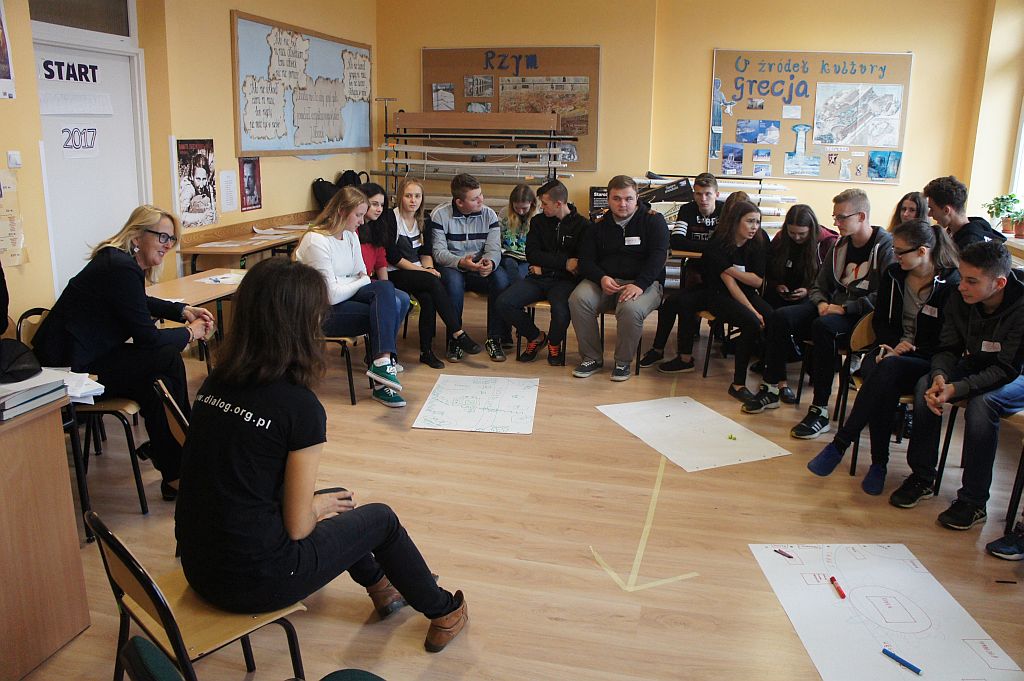 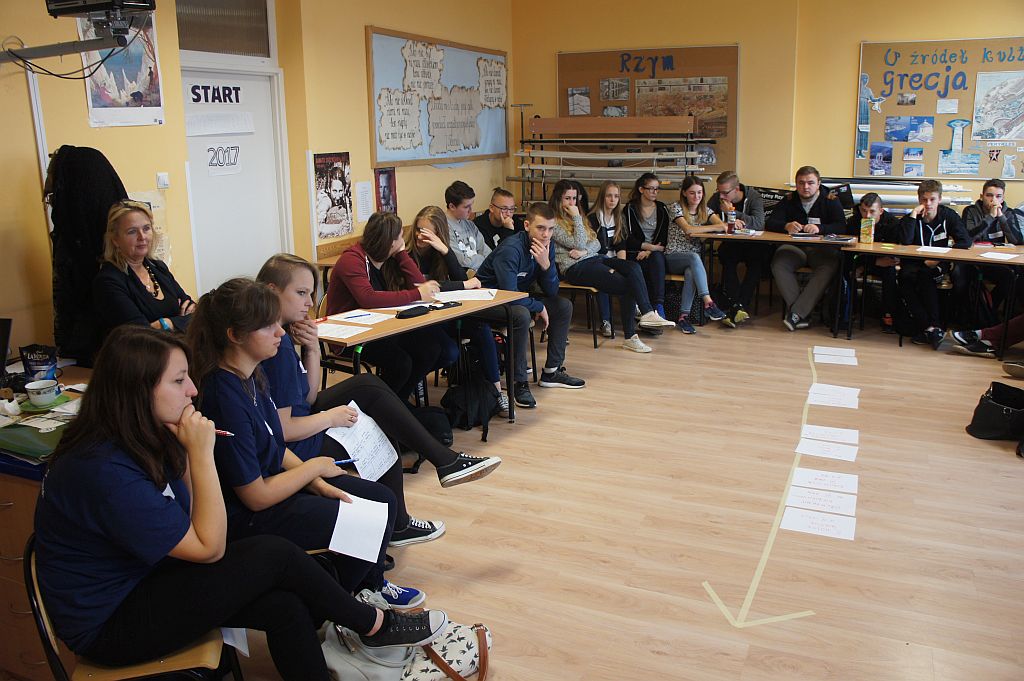 Students started off their presentation by talking about first Jews to arrive in Dukla and discussed the coexistence of the town’s multicultural population. Then they showed their guests a grave with a star of David from the parish cemetery. Identity of the person buried there remains a mystery. “A baroque monastery of Bernardine monks stands across the cemetery,” students pointed out. One of the monks, Jakub Pułkowski, fed Polish and Jewish children there during World War II. Participants were also introduced to Natan Laner, a Jewish photographer. The next site was the House under the Linden Trees (“Dom pod Lipami”), which had once been home to dr Strychalski, who worked together with two Jewish doctors, Adolf Diesler and Józef Hendler. When talking about the prewar mail service, students presented photographs of postcards and letters written in Yiddish.

Guests were then shown photographs of the building that used to house a district court. Students mentioned two Jewish lawyers that worked there and presented the story of Mrs. Zajdel, who was executed for hiding a Jew. Students also discussed the history of the building that used to house a Cooperative Shares Bank (Spółdzielczy Bank Udziałowy), whose board member included Mozes Hilel Rozenthal. Presenters also mentioned what would happen in front of the former carriage house; this was the departure point for Jewish transports heading to Bełżec death camp.

Their audience learned that the site of the city park was in all likelihood the location of the town’s first Jewish cemetery. Stories of two Jewish families – that of baker Abe Bergman and clockmaker Altholtz were also presented in detail. Students then moved the group back in time to prewar marketplace in Dukla, describing its everyday life and presenting buildings such as Lichtman’s hotel or the rabbi’s house. They shared how they were able to get in touch with the son of the local baker Maks Rozenblum, adding information about such sites as cheder, yeshiva, synagogue and mikveh. Guests also heard about Dukla’s ghetto. The virtual walk led the group to the Municipality Office, which had students discuss Polish-Jewish local government. A presentation on baron Hirsch’s school led students to talk about the Jewish education system in general. Local butchers, millers and timber-mill owners – all Jewish – were also mentioned. The final site to be discussed was the Jewish cemetery. Students took turns to present the site’s history, explain headstone symbols and Jewish burial rituals. Finally, one female student sang “Mayn shtetele Belz” with words in Polish by Agnieszka Osiecka.

Students shared progress on their project work online through the school’s history club Facebook page. They also uploaded their film about the project to the site.

Thanks to the tour through Dukla we became personally involved in learning more about our town. Each building has many fascinating stories.

I am very happy to have learned about stories of individual people and their families.

In my opinion we should be talking about these issues, because some people judge others not knowing anything about them. We also want Dukla residents to understand that Jews were not our enemies but a part of our community.