School of Dialogue at Jędrzej Śniadecki School Complex No.1

In the heart of Ełk, inside what is now known as John Paul II park, stands Mount Jerusalem (Góra Jerozolimska) – Jerusalemberg. According to maps from late 19th century, a Jewish cemetery was located not far from the site and the whole area was known as Jüdenplatz (Jewish Square). The name of the mound is the only remnant of the Lyck’s (as the town was then called) Jewish community that is still present in contemporary cityscape. First Jews settled in the town in early 18th century; however, earlier sources mention Jewish merchants who would visit the town for trade fairs as early as the 15th century. Although the local Kehilla was quite small, it owned a red-brick synagogue built in the neo-Gothic style common to all sites of worship in Ełk. World’s first Hebrew-language weekly magazine HaMagid (The Preacher) was published in the town, spreading Zionist ideas not only in Prussian, but also in Polish and Russian cities. As the 20th century advanced, the community numbers declined, partly due to anti-Jewish actions in the III Reich. Ełk’s synagogue was burnt down during Kristallnacht. Due to emigration, on the eve of World War II only 16 Jews still lived in the town.

For students from tourism-focus class at Jędrzej Śniadecki School Complex No.1, Jewish history was no news – before School of Dialogue workshops in the spring semester, the group had visited POLIN Museum of History of Polish Jews in Warsaw and organized the local edition of museum’s “Daffodils” Warsaw Ghetto Uprising commemorative campaign. Yet their knowledge of Ełk’s Jewish population was limited, which made them very curious to learn about this hitherto unknown aspect of their town’s past. In the course of the workshops with Forum’s educators, students attempted to recreate Jewish Ełk through newly acquired information, conducted group discussions and demonstrated their knowledge about the Holocaust. With the help of their teacher, Mr. Hubert Górski, they began to prepare their final project.

Students found information about Ełk’s Jews in a number of sources. Books about the town’s history proved useful; so did publications from the Association of Eastprussian Jews and contacts with Ełk’s Historical Museum. One of the museum employees, dr Rafał Żytyniec, was invited as guest for the third workshop of School of Dialogue. He told students about Jewish-owned shops in the town and about descendants of Ełk Jews who now live in Sweden and Israel. It turns out that Ełk’s Gymnasium had three religion teachers prior to World War II – a Catholic priest, a Protestant pastor and a Jewish rabbi. This meant that children representing all three religions went to school together and that only religion lessons were separate for each group.

When the final project – a walking tour for local residents, concert of Jewish music and a guidebook to Jewish Ełk – was ready, students began to plan the events scheduled to take place on May 26. Posters appeared in municipal institutions such as the school and public libraries as well as on information boards and online platforms. Students along with their teacher also gave a few interviews in local newspapers and radio stations. 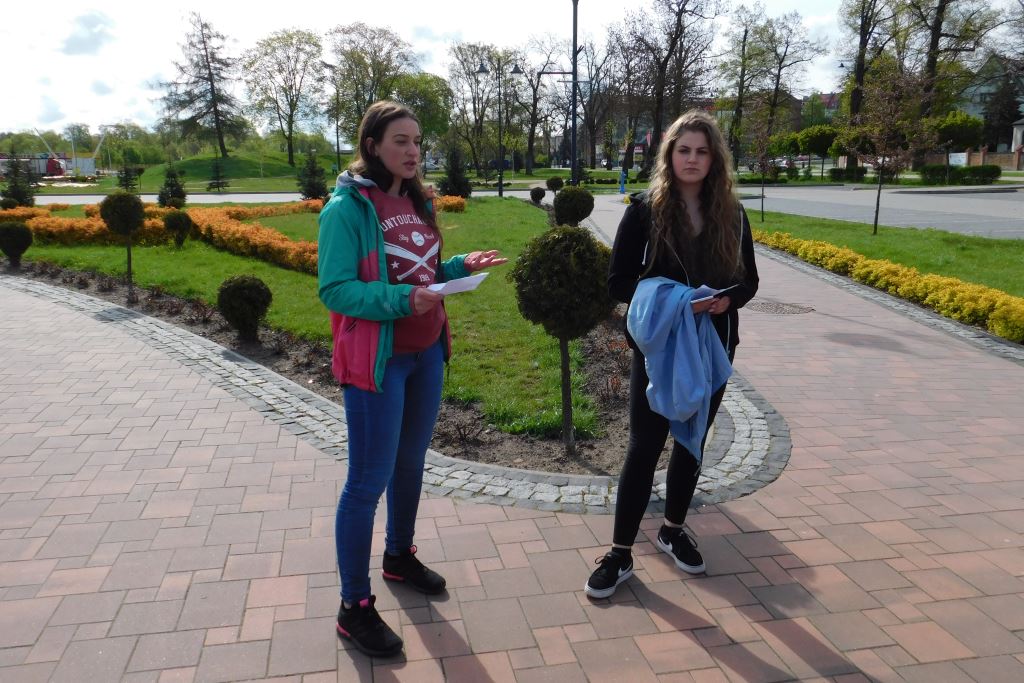 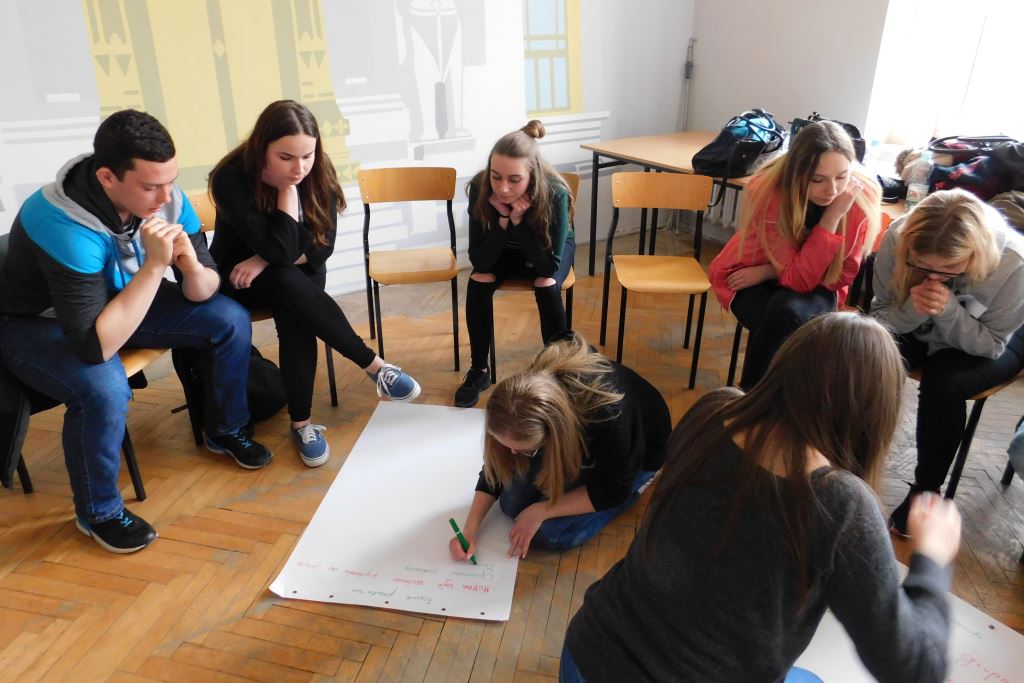 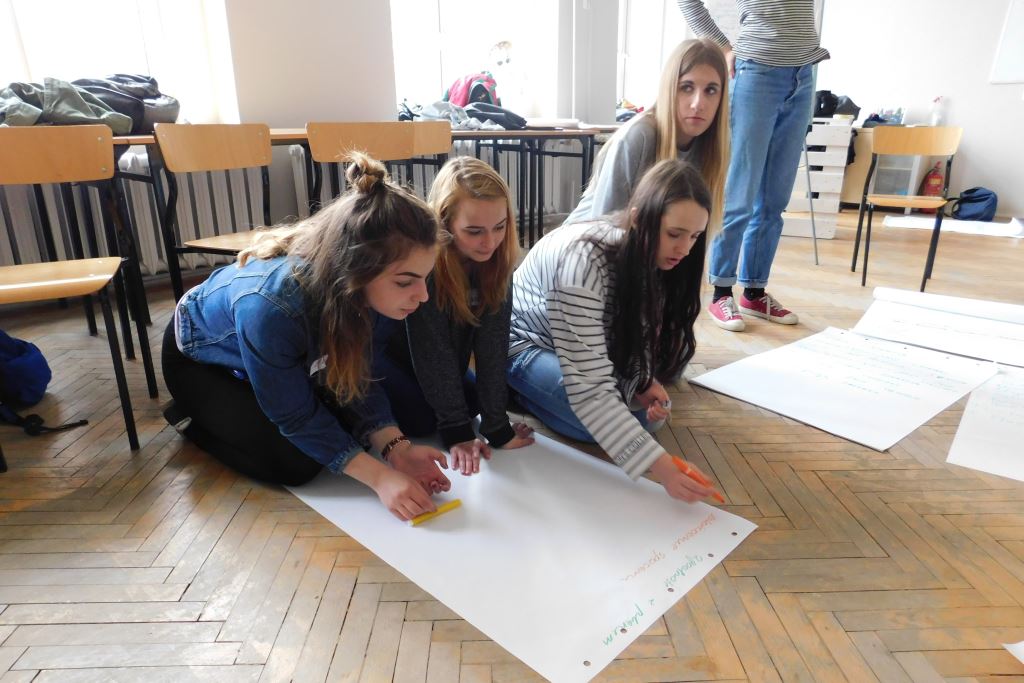 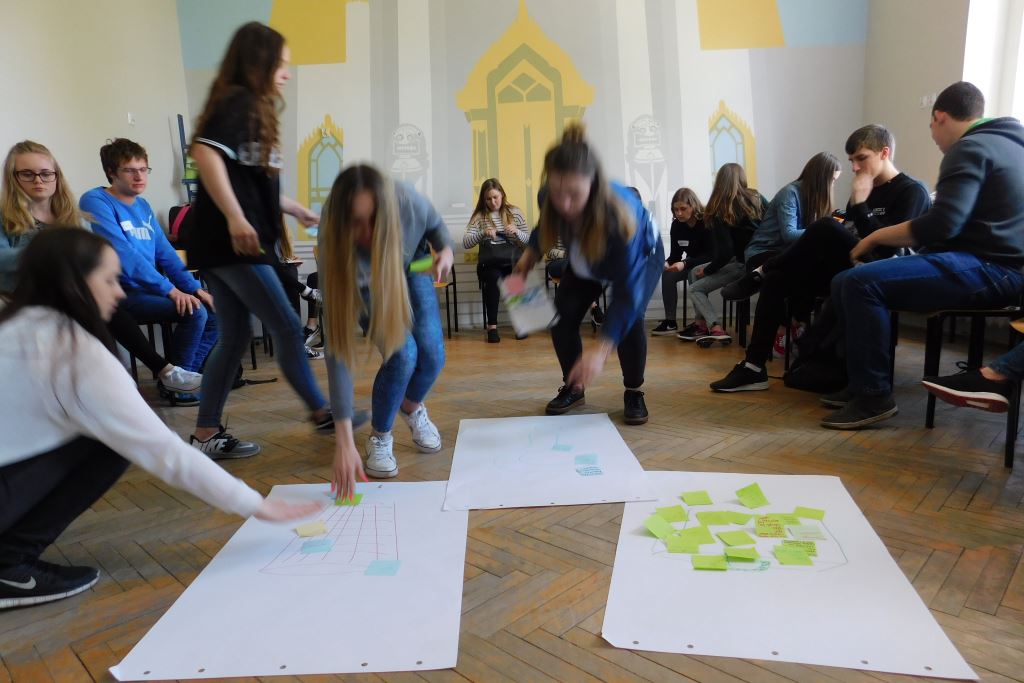 The grand finale of School of Dialogue in Ełk began with a walk presenting Jewish history of the town with students in the role of guides. The route started in the heart of the city, by Ełk’s Cultural Center, not far from which up until mid-20th century town fairs would be held, which historically were the first reason for Jews to visit Ełk. A detailed description of the route was included in the brochure Przewodnik po Ełku. Szlakiem Żydów ełckich (“A Guide to Ełk. Jewish Route in Ełk) that was published with the support of the local authorities. In the evening after the tour, the Municipal Public Library hosted a Jewish music concert Jak malował Pan Chagall (How Mr. Chagall painted) with performances by Marek Rawski and Roman Ziemlański.

Audience members were presented with information about the students’ School of Dialogue project and learned basic facts about Ełk’s Jews. There was also an opportunity to sample Jewish cuisine and try dishes the students had prepared themselves. As project participants confirmed, the workshops offered not only a wealth of knowledge about Jews, but also allowed them to discover Ełk’s history they had not known about before and to share it with the local residents.

School of Dialogue is an extraordinary project that allows us to learn about Jewish culture as well as to find sites connected to Jews in our town. We gain knowledge in ways that are very different from the typical school mode.

In all likelihood, if it weren’t for this project, I would have never learned so much about Jewish history and culture.

When I learned that for Jews, a Jewish cemetery will always remain a cemetery, even if it is physically gone, I honestly freaked out that up until now, no one had cared about the site of what was and still is Ełk’s Jewish cemetery. Along with the rest of the group we will do our best to commemorate this place.

I think it is worth knowing the culture, history and people of Jewish descent and to make others aware of it as well so that they do not believe in stereotypes surrounding Jewish culture.