The School of Dialogue at Public Junior High School No 1

It was the second time that the School of Dialogue workshops were organized in the Junior High in Frysztak. Another group of students learned about the Jewish residents of their town. Why? Because Jews already lived here in the 17th century. They accounted for some 60% of the town’s population, 73% at the beginning of the 20th century. Three fourths of the town’s residents died during the World War II, mainly the Jews.

This time the junior-high students not only wanted to organize a walking tour in the footsteps of the Jews from Frysztak, but also to prepare something more sustainable, something that would raise awareness about the town’s Jewish community. The young boys and girls put a lot of effort into their work. In addition to the history of the Jews from Frysztak, as well as materials describing Jewish culture and traditions, they used poems written by the former students of the Christian/Jewish school in Frysztak.

The junior-high students invited the first-year fellow students to the walking tour. They showed them the drugstore owned by the Zasielski family – a Jewish family that lived in the town – a place of livestock fairs, where during the German occupation Jews were assembled to be later deported to Bełżec extermination camp, the territory of the ghetto in Gołębiowska Street, the spot where the synagogue stood, the rabbi’s house, the cemetery where they read a Jewish prayer for the dead, different than Kaddish. Estera Etel, the daughter of Elimelech from Lezajsk is buried at the old cemetery in Frysztak, whereas the grave of tzaddik Menachem Mendel Halberstam from Frysztak is located in the new cemetery of the nearby Twierdza. 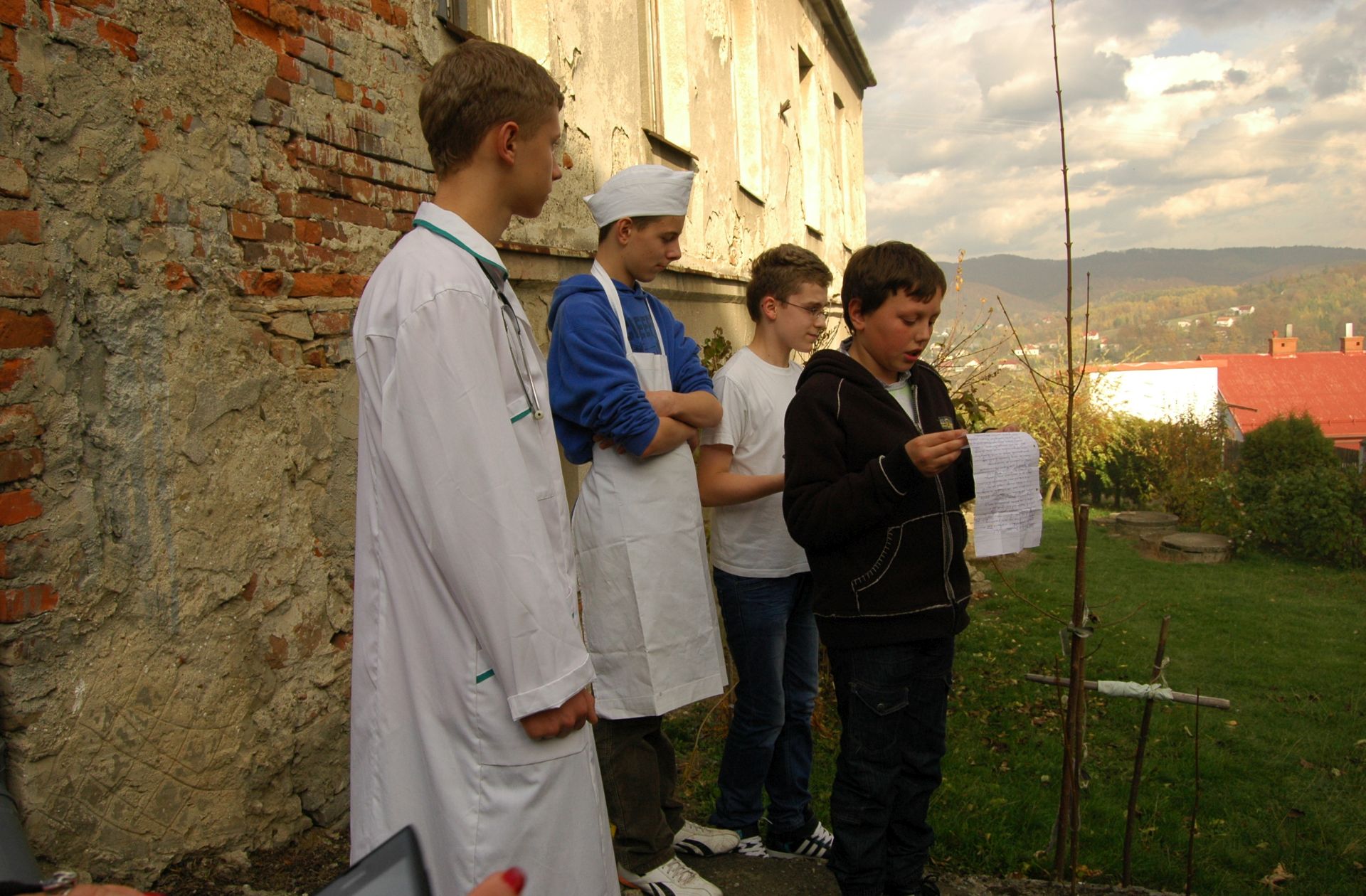 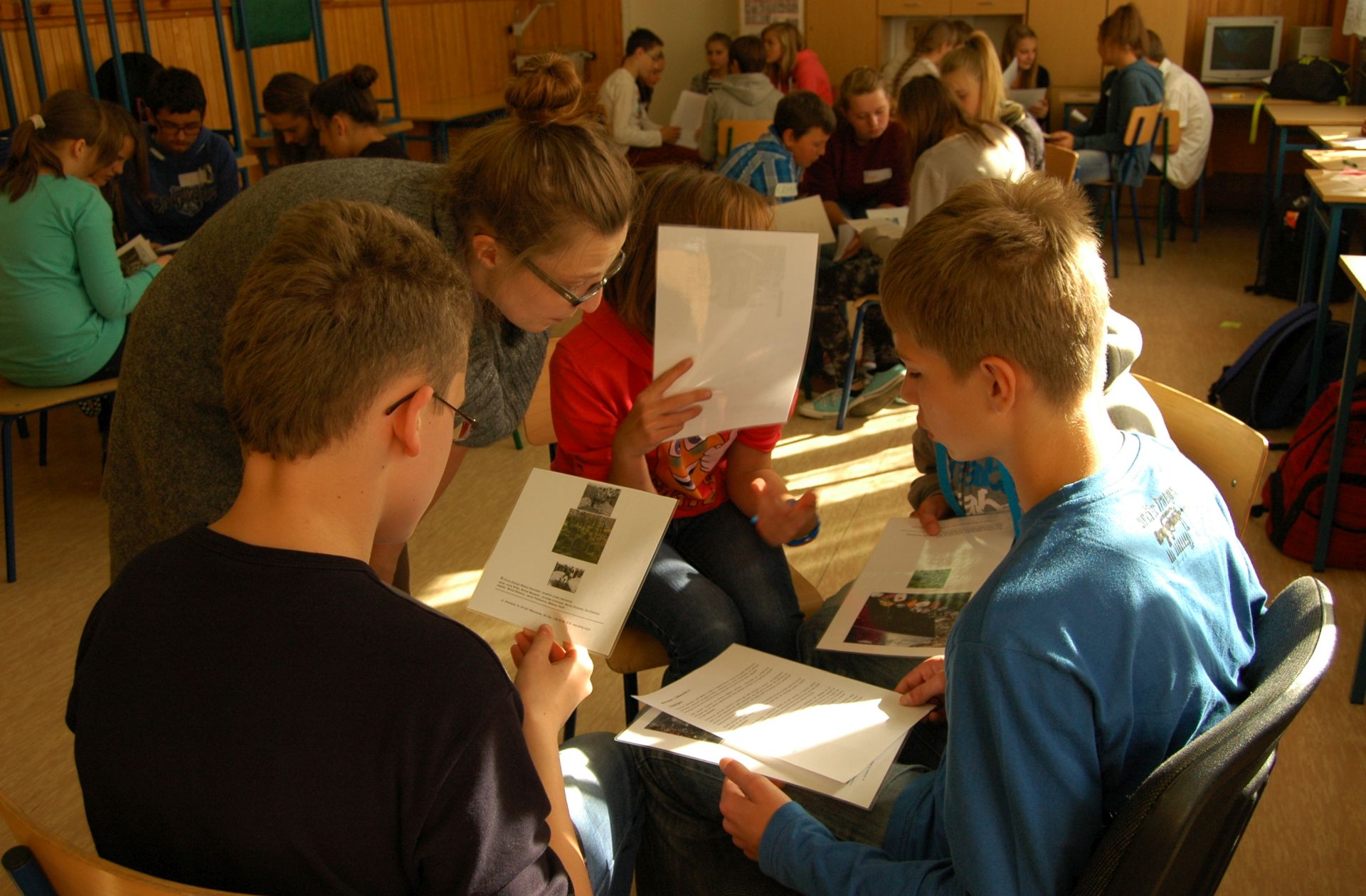 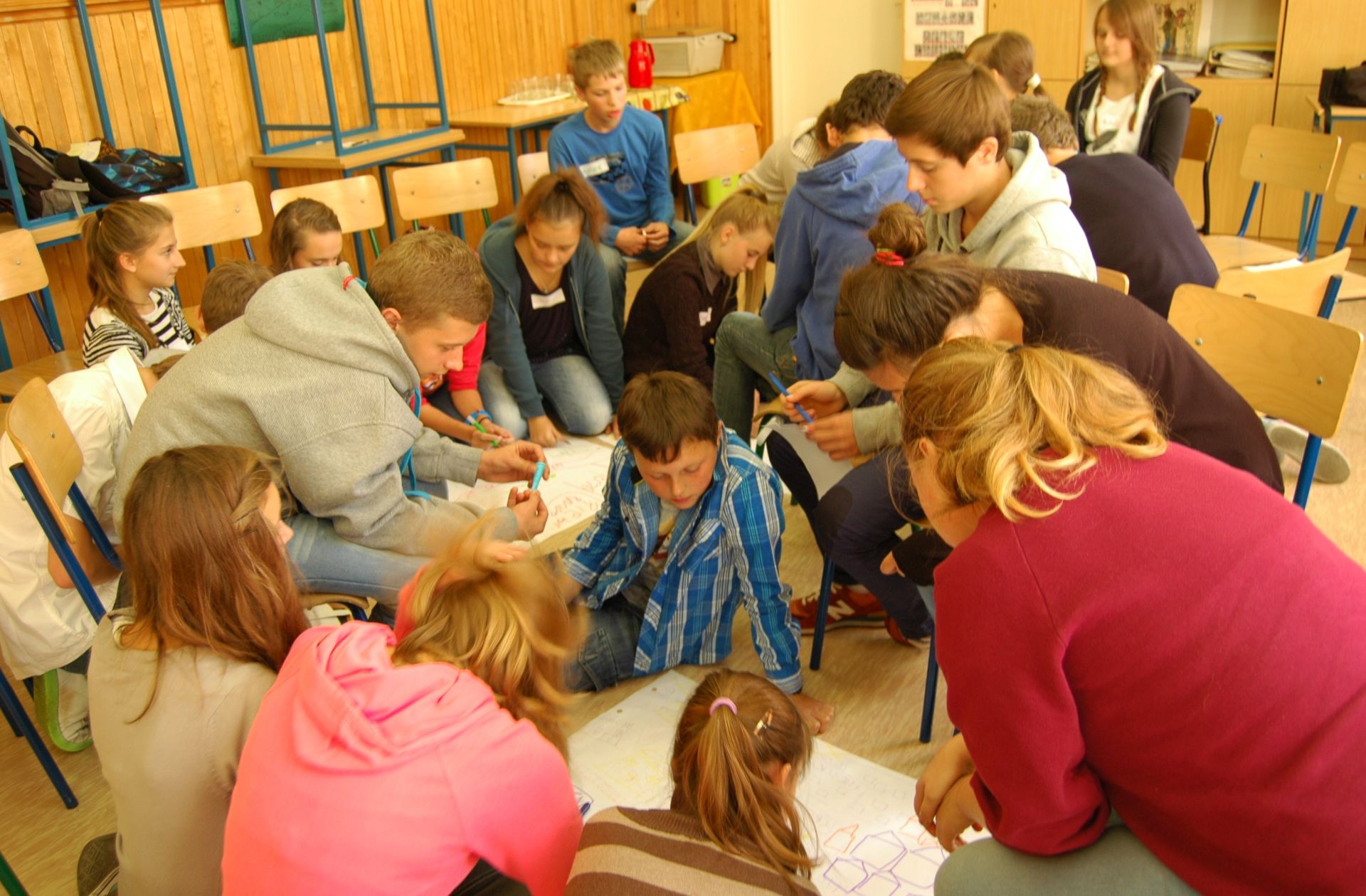 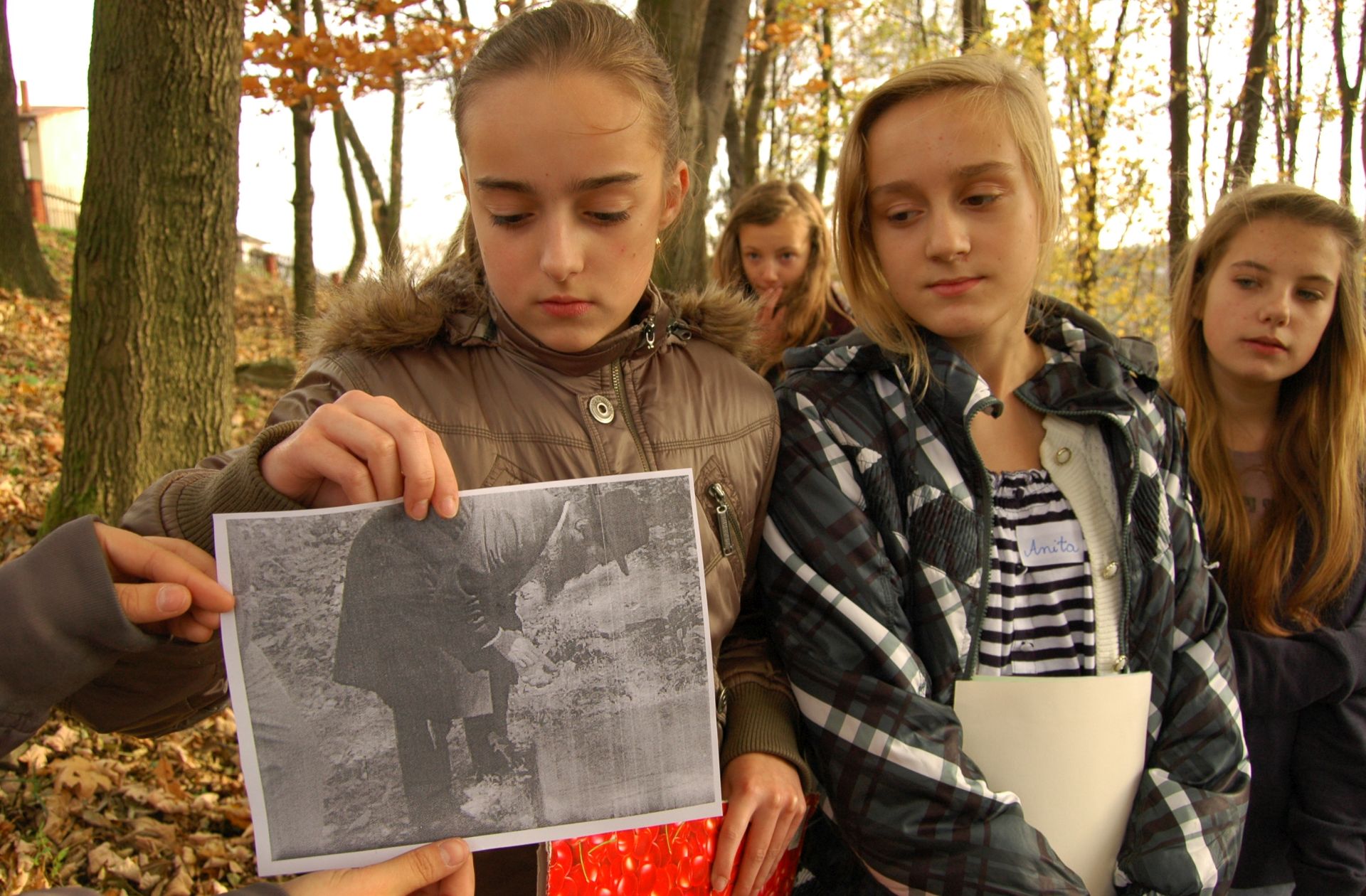 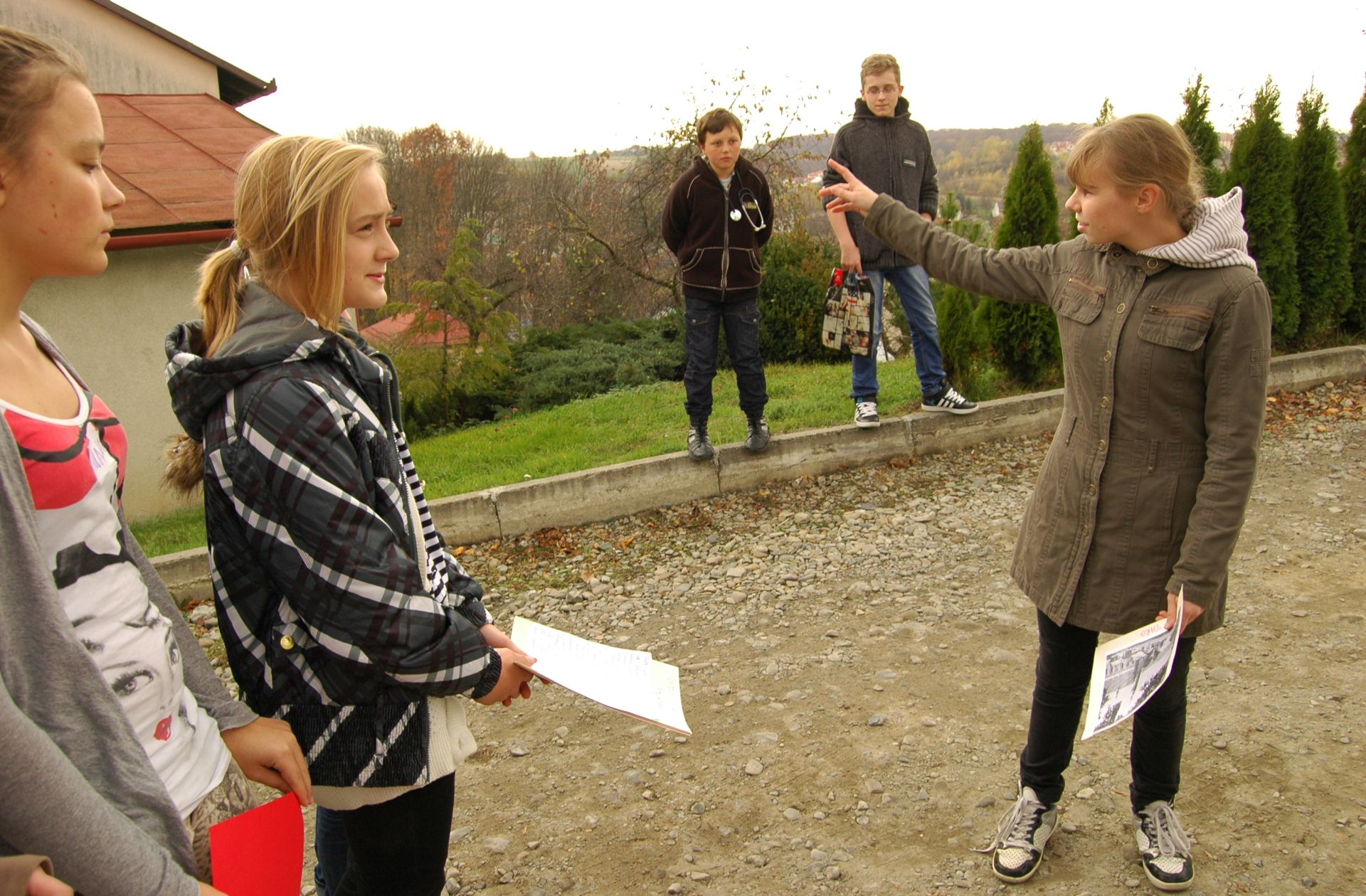 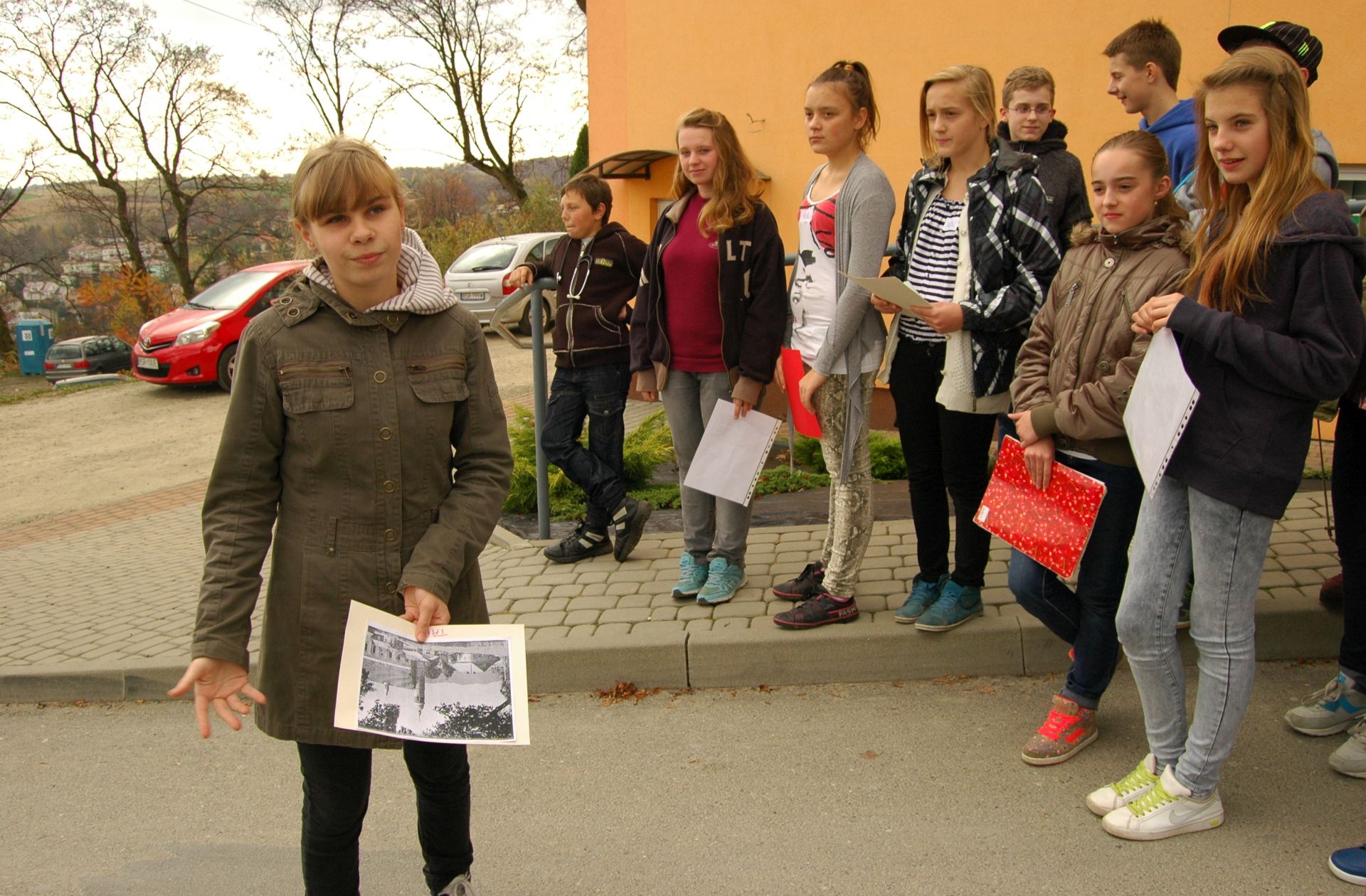 Tzadik Halberstam came from a well-known and large group of the Hassids that later formed the Bobov dynasty. The tour participants continued the walk and stopped nearby the first public school, at the market square where the Jewish shops once were, at the Labor Ward building where Jewish women worked as midwives, at the Court of First Instance building where Judenrat was located during the war. They also listened to an interview with an elderly town citizen who still remembered the Jews from Frysztak. The students even found works of Marek Hadro, an artist from Frysztak, whose drawings depict for example the synagogue building as it was remembered.

The walking tour was organized on November 8, a few days before the Polish Independence Day, and was part of the local celebration events.

The junior-high students also had the initiative to clean the quite neglected Jewish cemetery that is located not far from the market square.

The guidebook created by the students for this occasion, besides maps, photos and drawings, also includes stories about Jewish individuals and families that the Frysztak elderly residents had told them about. The topics selected by the junior-high students are aimed to show the common Polish-Jewish history of Frysztak over places like the local markets and fairs or the labor ward. The walking-tour guide can be downloaded from the school’s website.

My group had this idea to clean the Jewish cemetery. We didn’t do it for praise. I wanted to do it out of respect for the Jews.

I enjoyed talking to the elderly. I have never had a chance to do it before because my grandparents and one grandmother are already dead.

The whole group got used to working together and I really appreciated it. We have always been getting on very well but thanks to this project we became even closer. I am a tolerant person and I am very happy that I was given the opportunity to pay respect to the people who once lived in Frysztak.

School of Dialogue program in Frysztak was made possible by the support from HARVEY KRUEGER.