“We share the past, the history. The stream meandered through the center of the town, where the synagogue stood at the foot of the hill. To the left, at the bottom of the hill, Beth midrash was located, and below, just above the stream, there was a mikvah. The public latrine was just behind the mikveh. Jewish owned houses, an orphanage and an old slaughterhouse were at the bottom of the hill. In summer, Jewish girls did laundry in the stream. It was a paradise for Jewish boys in the winter as they skated on the ice, whereas in the summer they crossed from one bank to the other on a raft they had built. All children would use the name Jordan for the Nida river of Gąbin, which was narrow as a stream. This only proved that the Holy Land was always present in the thoughts of local Jews. Poles and Jews had their houses at different streets, but the distance was not big. The market square and the surrounding areas were occupied by rich Jews and Jewish secular and religious institutions. One of the streets going from the market led to the cemetery. It was interesting that one street had two names. When it passed the area inhabited by Jews, it was called Cmentarna Street, but further down, where the Poles lived, it was called Szewska Street.” (Recollections of Henry Greenbaum and Jacob M. Rothbart– Collection of Zbigniew Łukaszewski)

A film depicting the life of pre-war town where the fate of three communities – Catholic, Evangelic and Jewish – intertwined was shot in Gąbin. All the School of Dialogue participants and educators have seen it (it is available here).

There were times when Jews made up almost half of the town’s population, and in 1921 2,500 Jews lived here, constituting over 40% of the total population. The Jewish community developed rapidly in Gąbin and actively participated in the life of the town. In 1710, a wooden synagogue was built in Ciasna and Tylna Streets, just next to already existing cheder, mikveh and the small synagogue. Jews lived mainly in Stary Rynek, Czermińska, Starościńska, Krótka, Kutnowska and Mostowa Streets. By the 19th century, many Jews lived in the nearby villages where they dealt with lease, kept inns and produced and sold alcohol beverages; by the end of the 19th century they monopolized trade in town, mainly in textile products. The Jewish community had its own political organizations, libraries, sports clubs and the cemetery where now only a few matzevot remain. Rajza Żychlińska, a Polish poet writing in Yiddish, comes from Gąbin, as well as Abraham Gombiner, a philosopher, tzaddik and author of comments on the Torah.

In 1939, the town was incorporated into the III Reich and renamed Gombin (1939-1945). In August 1941, a ghetto was set up within the area of the so-called “Budki“ and Kilińskiego Street, where nearly 2,100 people were confined. It was liquidated in 1942 and the Jewish inmates were transported to the Chełmno concentration camp.

Many of the above-mentioned places were included in the walking tour prepared by the students for the town residents. The tour was organized on June 17, and gathered mainly parents and friends. 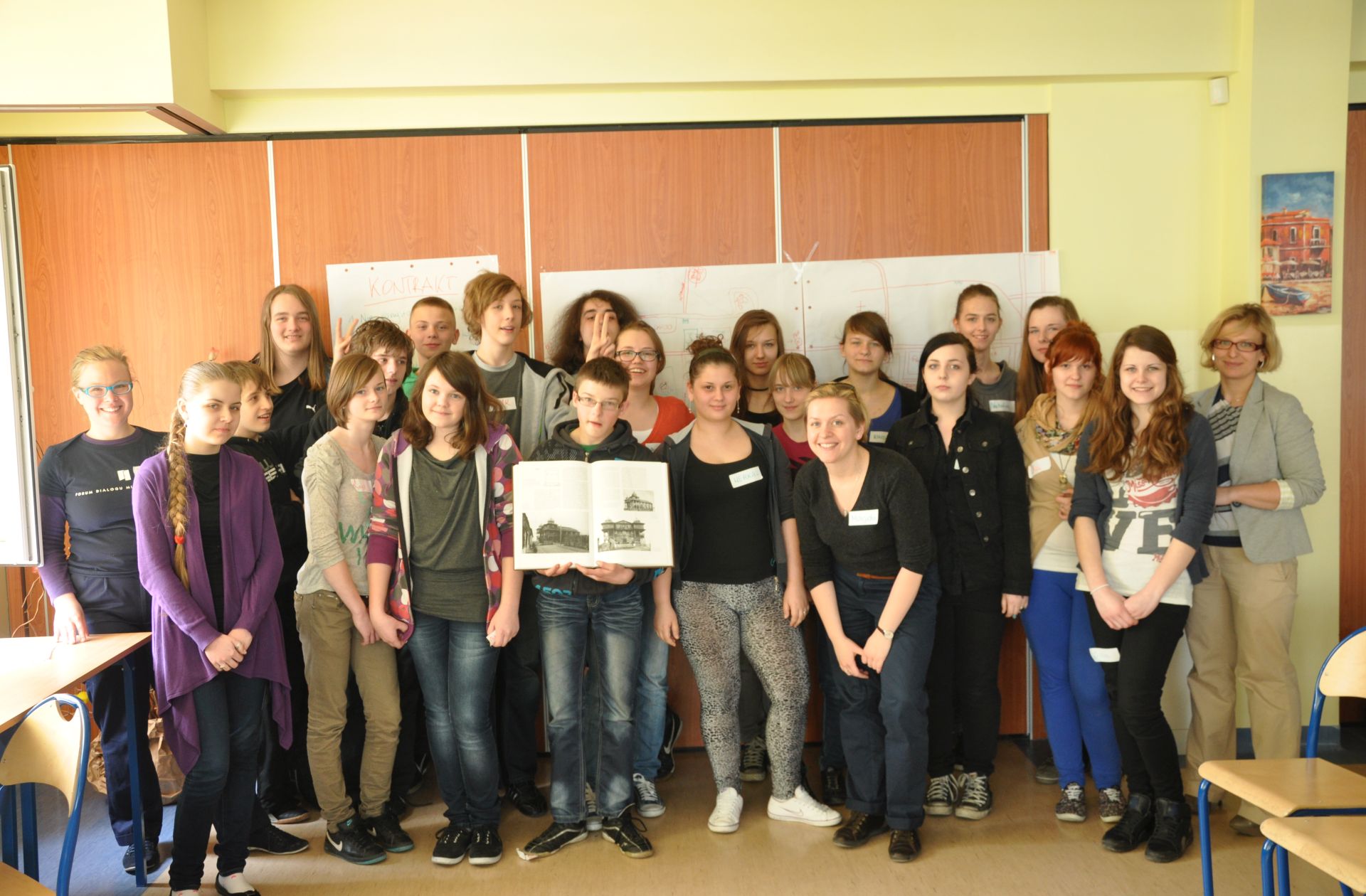 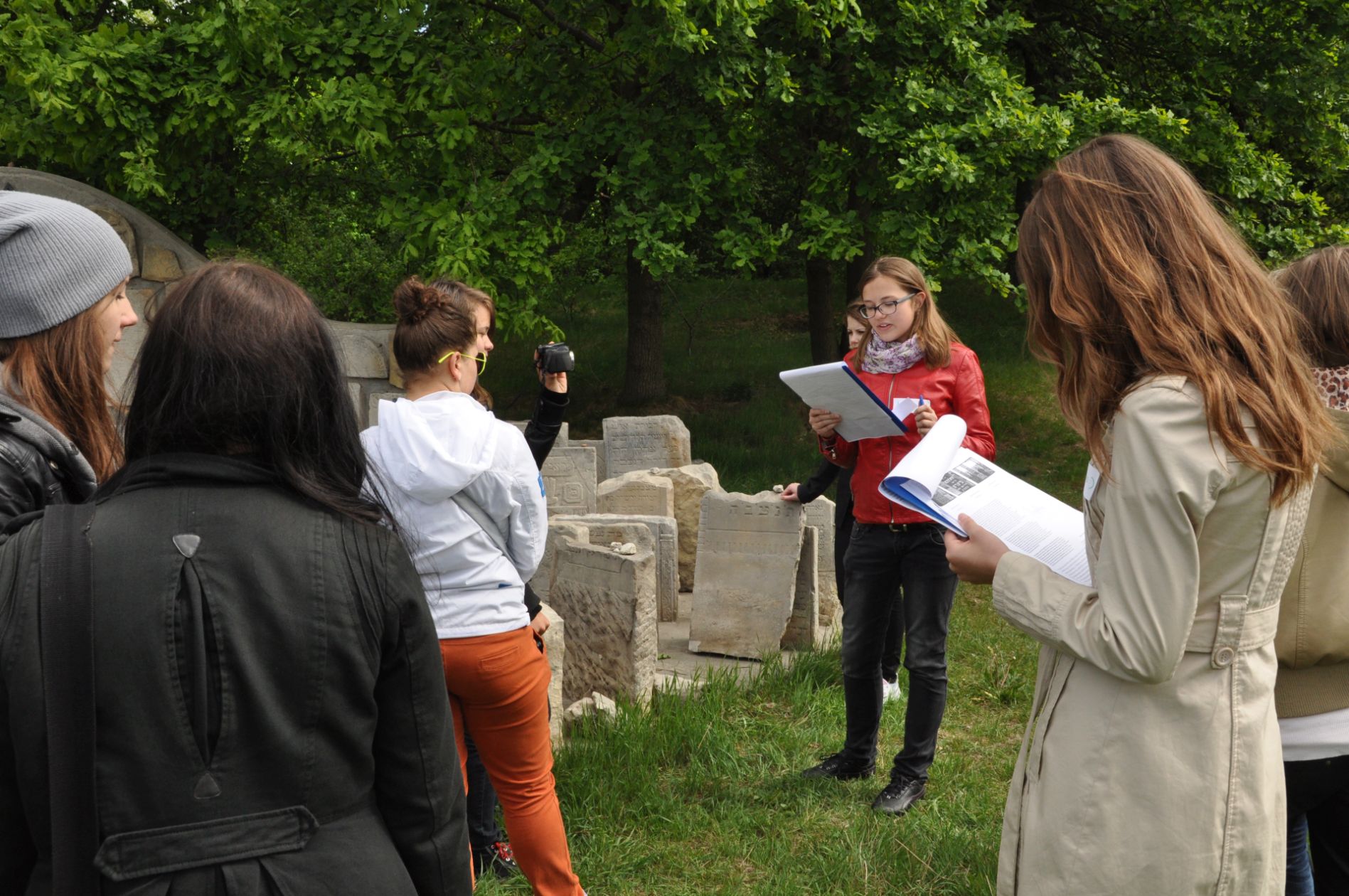 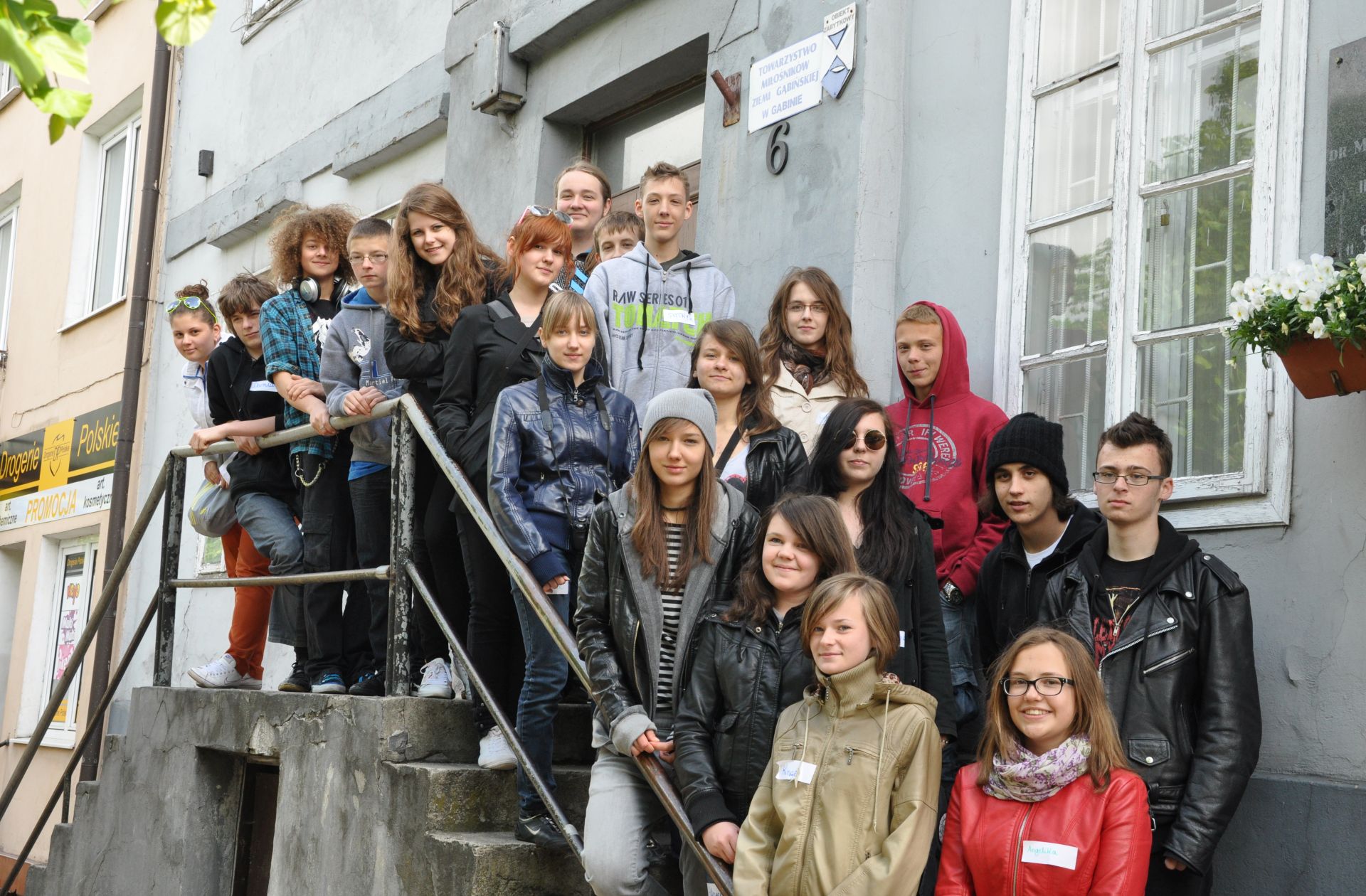 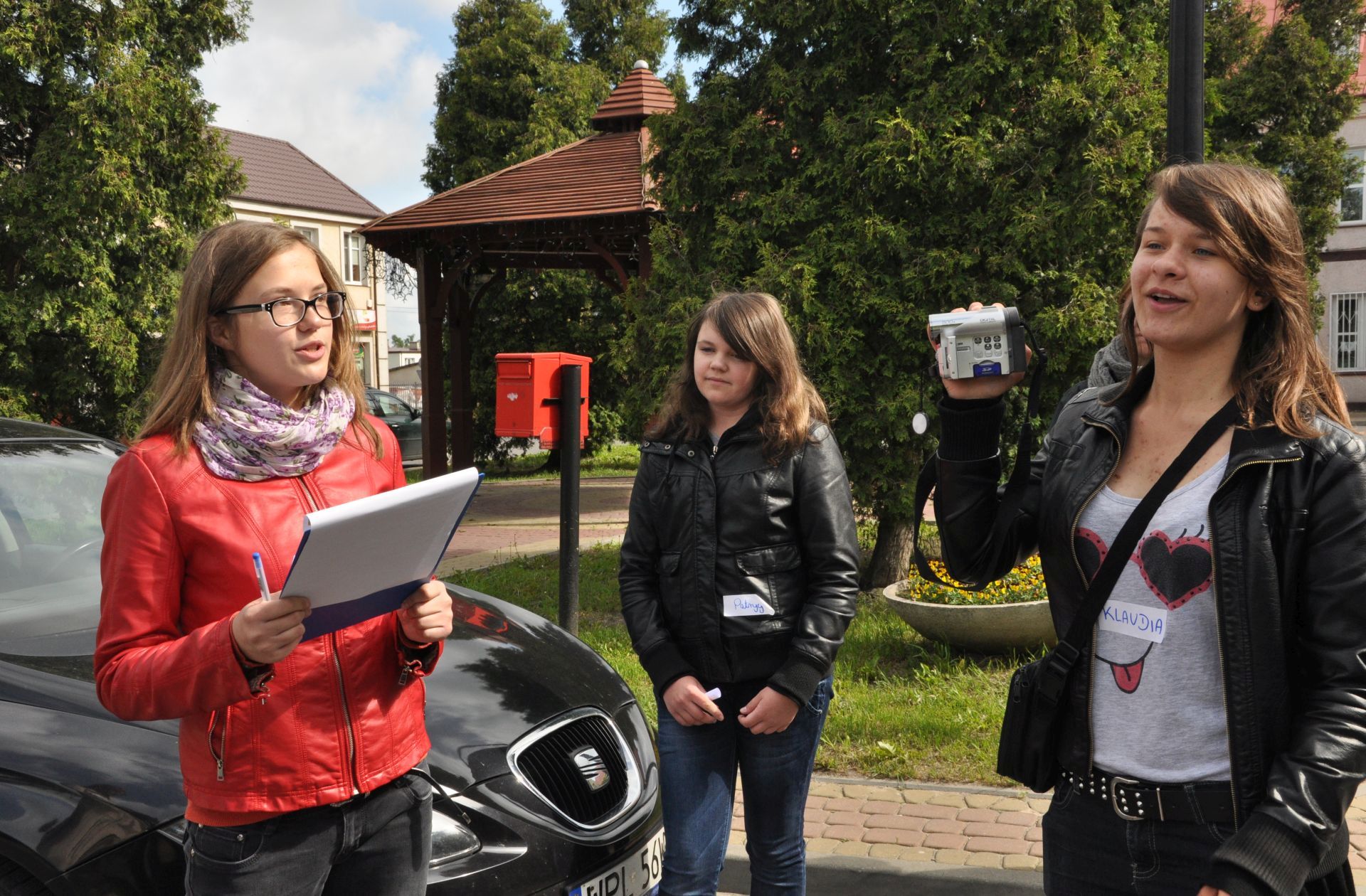 What is more, on July 12, students had an opportunity to present their work to Minna Zielonka-Packer, a descendant of Jews from Gąbin, involved in activities of the Gombin Society. The second walking tour was also attended by Łukasz Florkiewicz (a caretaker of the Jewish cemetery) and Sebastian Bałko (an interpreter, a contact person from the Gombin Society). Thus, it was an interesting experience for the students that involved cooperation of people with the same goal, i.e. to preserve the memory of the past. The guests were very impressed by the walking tour, in particular by the knowledge and involvement of individual students. For many of them, it proved the first ever reflection about the town’s past: “I live in Gąbin. I hardly know anything about its history. I had an opportunity to find out about it due to the project that aims to inform us, students, about the past and present. About places that used to be here… A cinema, theatre, synagogue used to stand in Gąbin. Today, there is no trace of it. (…) This project made me realize that I know very little about the history of Gąbin. And, it is a pity. (…) I do not feel good about the fact that I knew so little about my town.”

To conclude their project, the group prepared an album comprising copies of archival photographs, entitled “Following the footsteps of Jews – a tour around Gąbin”. It was illustrated with a fantastic map of pre-war streets arrangement and their names. The album also addresses the issue of desecration of the cemetery, and finding and returning of mazevot, previously used to build the bridge and curbs.

The authors of the album also quote a poem by Ada Holtzman written on the occasion of unveiling of the monument and honoring a resident of Gąbin for helping Jews during the war.

“We Are Still Here”

After more than half a century we are still here,
Back to Gombin, with a smile and a tear,
Descendants, survivors from five countries flew,
To visit the hometown so old and so new.
Birth place of fathers and mothers,
Of uncles and aunts, cousins and others,
We all share the same past, same common history,
And remember the Shtetl and its lost faded glory.
United in grief, together we prayed,
And the Kaddish again loudly was said,
We swear it will never happen again,
And we shall not forget, Amen and Amen…

Finding information wasn’t easy, but I persevered. I’m glad that I could learn so much about you. I hope that I will meet you some day and despite my poor English, we’ll be able to talk.

In Gąbin, there is a group of people who are interested in its Jewish past. Thanks to
them we have some historical sites, documents and photographs from before the war.
It is not much, but the collection helped us broaden our knowledge of the subject. We
all put a lot of effort into this. We’re trying to show local residents what had happened
here.

School of Dialogue program in Gąbin was made possible by the support from THE GOMBIN JEWISH HISTORICAL & GENEALOGICAL SOCIETY.