School of Dialogue at General Education School Complex No 4

First documents mentioning Jews in Gliwice in Silesia date back to the end of the 17th century. From that point on, the Jewish community would grow continuously. It is certain that in 1843 Gliwice already boasted a synagogue, a mikveh, a Jewish school and cemetery, while Jews comprised almost 20% of the town’s residents, which translated into 1880 people. In the second half of the 19th century, the synagogue was torn down; a senior citizen home was built in its place, with a new synagogue erected elsewhere. Around this time Jewish companies and factories were built, and the associations to aid the poor and the ill were formed. Every once in a while a Jewish person – a council member, entrepreneur or lawyer – would become an honorary resident of Gliwice.

Jewish Gliwice were not spared by Hitler’s persecutions. Shop boycotts were organized, Jews were banned from certain professions. In the course of four years, between 1933 and 1937, 40% of Jewish residents emigrated, most of them to places outside of Germany.The next wave of Jewish migration came after Kristallnacht, when the synagogue was blown up and rights of Jews were drastically limited.

In 1940 only 600 Jews were left in Gliwice in total. Most of them were deported to KL Auschwitz-Birkenau in May and June of 1942. In March 1944, four sub-camps of KL Auschwitz-Birkenau began to function in Gliwice’s repair workshops, with ca. 1300 prisoners. The camps were liquidated on January 17, 1945 and the death march took prisoners to Gross-Rosen. Watchtowers and some fragments of the camps’ fence still remain.

25 Jews from Gliwice survived the war; they were later joined by repatriates from the USSR. The Jewish community was resurrected in May 1945, with the Kehilla running its own school, mikveh, butcher shop, canteen and dormitory. Later on, people started to leave for Western world and Israel; most left in 1968.

Jews in Gliwice are currently under the Kehilla of Katowice, but there aren’t that many of them left. Is there a place in Poland where it would be otherwise? Two cemeteries still exist, one even still functions. A few of the tenement houses definitely used to have Jewish owners. The Jewish senior citizen home is now a police station, while foundations of Gliwice’s synagogue were uncovered in September 2015. 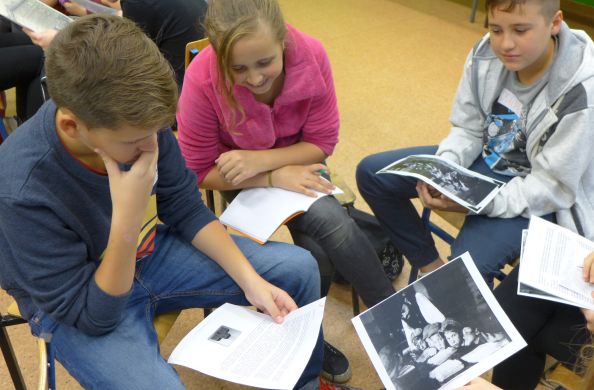 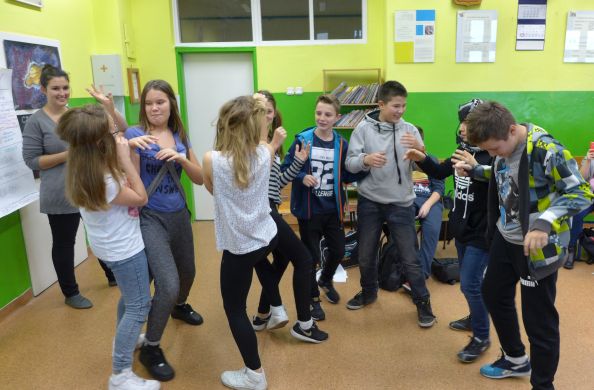 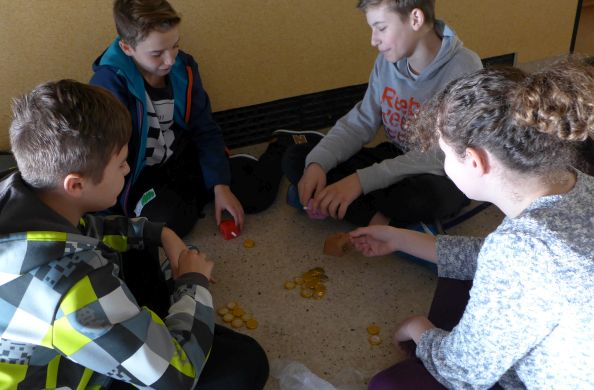 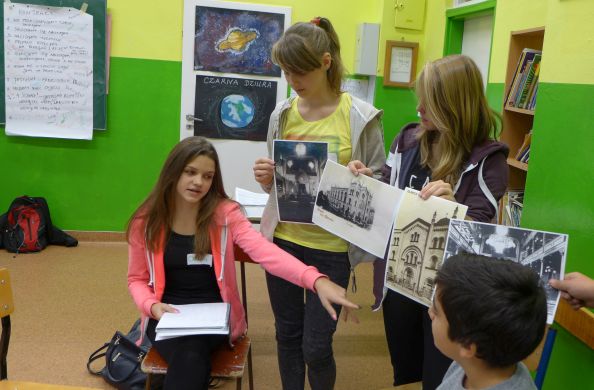 Every year a host of events is organized in the town: Association for Jewish Heritage “Memory – Zikaron” every once in a while organizes guided tours through the two cemeteries. A guidebook and audioguide about the Jewish Gliwice prepared by the Cukerman’s Gate Foundation have both been released. The neogothic Jewish funeral home recently became the Museum of Jews from Upper Silesia. The building was renovated for this purpose, when School of Dialogue workshops took place.

In the course of the workshops led by Beata Godlewska and Katarzyna Domagała, first year students from Gliwice’s junior high school got acquainted with Jewish culture, history and religion through the prism of their hometown. They learned about various Jewish holidays and where to find buildings connected to Jewish rituals in Gliwice. They watched films that presented Jewish social and religious life – what’s a bar mitzvah, what does a Jewish wedding look like? Students also participated in a meeting with Krzysztof Przybyłowicz, author of the book “Jews of Biecza – history and the Holocaust” and the school’s former principal.

For their School of Dialogue project, students organized an educational performance for their peers in the school’s hall entitled “Holiday of lights”.

They searched for and verified information, asking their teachers and the Jewish community of Warsaw for assistance. Students prepared displays presenting Jewish history of Gliwice and what remains of this history; who were the most famous Jewish residents of the town, what the cityscape looked like, where the synagogue and cheder used to be. They also created displays explaining what Jewish potato pancakes and doughnuts are called; they baked and fried both themselves for event participants. Information boards also explained what a matzeva is, what it looks like and what symbols it can feature, as well as about the holidays and elements of dress for orthodox Jews.
Students made their own dreidels and learned how to play in order to be able to teach others later. In the school’s hall students put up decorations they made themselves, with a sign reading “Chanukah – a Holiday of Lights” and a big Magen David underneath, in yellow and green. In the course of their presentation, one of the students demonstrated a Jewish dance and encouraged the audience to join in. Chanukah candles were lit, with students explaining their significance and why they are burning. In the course of the event, students told their guests about the Jewish past of Gliwice and about heritage buildings that testify to that past. At the end, students sang “Hava nagila” and encouraged their young audience to join in.

I got curious. From now on I will have a different perspective on Jewish buildings, Jews and sites connected to them as well as their holidays.

After these workshops I feel happy, pleased and curious. Through them I learned a lot, not only about Jews, but also to respect others.

Now, after four workshops we are left with the task to prepare our project. All bodes well, we hope to succeed. We are all optimistic, as thanks to these workshops we learned to work together.

School of Dialogue program in Gliwice was made possible by the support from TERESA and ROBERT SILVERSTEIN.