The range and effects of their project are impressive. The students involved town authorities in their project, contacted kirkuty.xip.pl portal and prepared a commemorative plaque for the Jewish cemetery. They also prepared brochures with hand-drawn pictures, invitations to a location based game and certificates of completing that game. “Learn, act, involve” – that was the motto for the students of Technical High School in Góra.

Jews lived in Góra already in the 14th century, but they were expelled from the town pretty fast. It was then the domain of the local dukes: Silesian Piasts, then Cieszyn Piasts dynasty. Then Góra went under the Czech rule, and then, in 18th century, Prussian rule. Prussian king Frederick Wilhelm allowed settling of Jews in 19th  century, which sparked a rise in Jewish population of Góra. After the First World War the number of Jews again decreased. They fled persecution and economic hardship in the wake of the war. In 1938, when the town belonged to the Third Reich, nationalist groups burned the synagogue and perpetrated acts of violence on the last Jews.

There are almost no traces of Jewish past in the town today. There is nothing left after the synagogue. Only a grass-covered cemetery serves as a memento, with single, small parts of headstones that survived there.

Girls from the Góra school were particularly interested in the pre-war history of their town. They managed to gather information about the Blumefeld Circus, renowned throughout the Reich before the War War II. They also found the place where the synagogue used to be and they met the local historian – Mirosław Żłobiński. They looked for information in libraries, the Town Office and the Municipal Office, they talked to citizens of Góra. They also read archived copies of pre-war press. During the School of Dialogue workshops they discussed with the educators Jewish traditions and holidays, but also the situation of the present-day Israel and multi-culturalism. 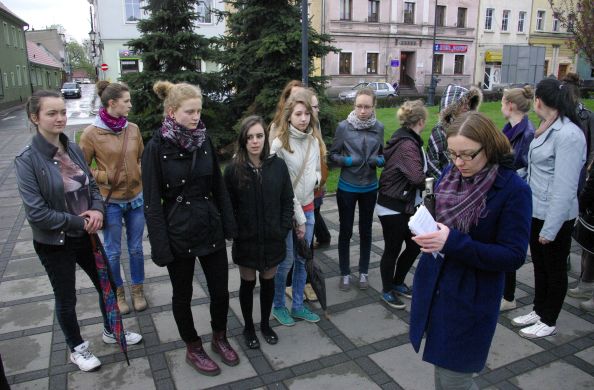 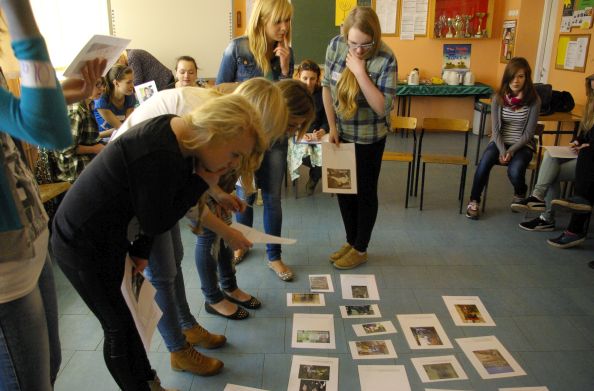 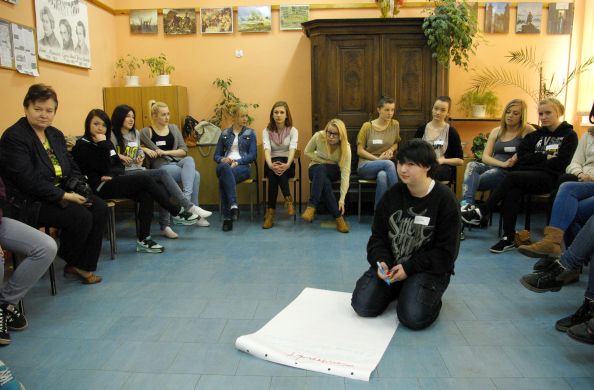 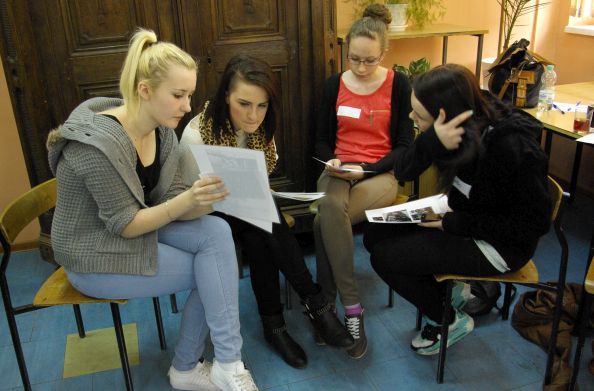 Inspired by workshops, the students prepared a location based game for residents of Góra and contacted the Jewish cemetery portal www.kirkuty.xip.pl. “We went to the Jewish cemetery. Its condition is extremely poor, forgotten by everyone. During the official location based game we will place stones there as tokens of appreciation and to honour the Jews living in Góra” said the students. They sent an email to kirkuty.xip.pl describing their involvement in the project. In reply they received a large plaque commemorating the cemetery, which was erected in the presence of town authorities at the end of the location based game, thanks to the involvement of the entire crew and the project supervisor. A sign informing about the cemetery was also placed nearby.

The educational, location based game “Following Jewish settlers in Góra” prepared by the workshops participants, was attended by students from the entire county.

The town park was the starting point, where a photo exhibition was held. The Kadr Historii Foundation presented unique items there – photos, pre-war commercials, documents and house number plaques. Students in groups of several people went on to learn about Jewish history of Góra. They retraced the town that is not here, following rhyming instructions. They also fulfilled a number of tasks: to draw a menorah, to compare town maps from before the war and from the present, to collect and paint commemorative stones to be placed in the cemetery.

The game organized by the Góra technical high school students was the first activity in town to commemorate Jews of Góra.

I’m very happy to take part in this undertaking. Thanks to it, citizens of our town will learn about the history of Jews living in Góra in the past.

We went to the Jewish cemetery. Its condition is extremely poor, forgotten by everyone. During the official location based game we will place stones there as tokens of appreciation and to honour the Jews living in Góra.

We want to pass the knowledge on – to our neighbours, friends and citizens, so that they can learn something about Jews from Góra.