Grabów is located in Łódź voivodeship, in Łęczyce county, some 70 kilometers north of Łódź and 120 km west of Warsaw.

Up until the outbreak of World War II, Jews comprised around half of the local population. They first arrived sometime in early 18th century and were mostly merchants and craftsmen. Jeziorski family ran the mill, Linas Ha-Tzeddek worked with senior citizens, the chronically ill and the poor. Gemilas Chesed offering low-interest loans, amateur actor’s club and Professional Association of Jewish Craftsmen in Grabów all operated in the town as well, while in 1928 local branch of Icchok Lejb Perec Jewish Library was opened. There were Zionists and there was Aguda, Workers of Zion and Bund. Most Grabów Jews followed Orthodox Judaism, while the reformed synagogue had 101 members. Prior to 1939, relations between local Christians and Jews were tense; occasionally, outbreaks of violence would occur.

The history of local Jews ends in April 1942, when all Jewish residents of Grabów and Łęczyce – altogether over 1,200 people – were gathered in the local church, from which lorries would transport them to Kulmhof death camp in Chełmno nad Nerem. Grabów’s synagogue was devastated. After the war it served as a furniture warehouse; today it stands empty and is falling into disrepair. The Jewish cemetery was also devastated, with matzevah stones being used for paving the nearby roads.

In the course of four workshop days, under the leadership of two Forum educators, Izabela Murawska and Ewelina Bartosik, junior high school students from Grabów learned about local Jewish history. They engaged in discussions, immersing themselves in the subject matter and asking many questions: about Jewish rituals and Judaism, the source of particular traditions, the differences between Judaism and Christianity. They were also fascinated by pre-war coexistence of Jews and Poles – students asked how Jewish communities managed housekeeping during Shabbat and why it is Saturday that is holy for the Jews and Sunday that is holy for the Christians. They talked about World War II, the harm inflicted on the Jews and the consequences for contemporary Jewish life. As part of the workshops, students met with one of Grabów’s oldest residents, Mrs. Antonina, who told them about life in half-Jewish, half-Christian prewar Grabów.

While preparing their final project for School of Dialogue, students looked for archival photographs and information that would augment their understanding of prewar Grabów. They searched by watching films and talking to other residents. They also organized a poll among their peers to find out what they already know and what information about Jewish Grabów is still unknown. 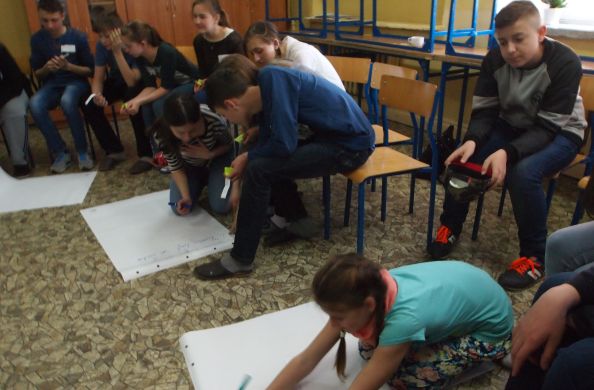 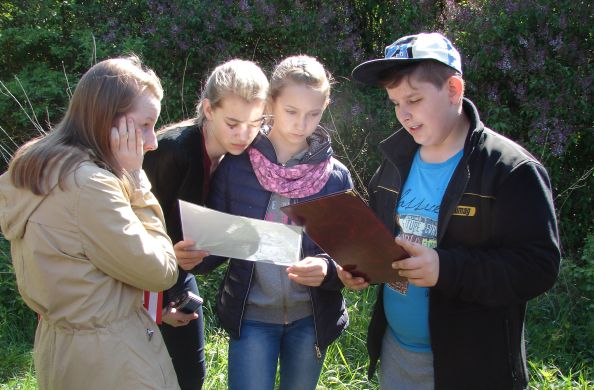 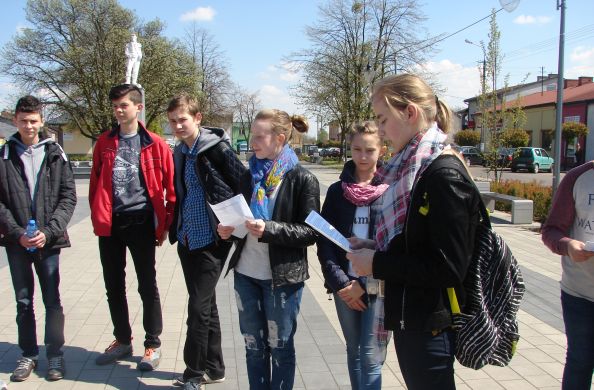 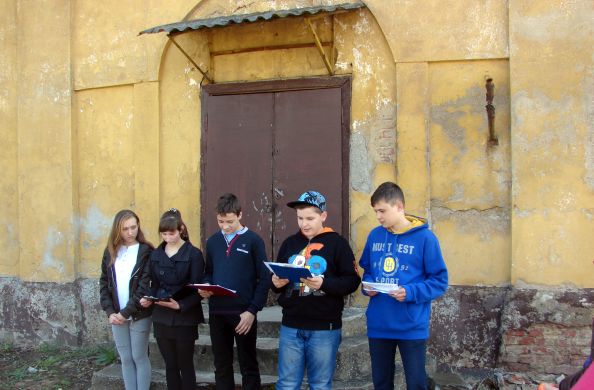 To invite people to the urban game they organized, students handed out leaflets, prepared a schoolboard newspaper and prepared a poster announcing this event. Ultimately, their event was attended by 131 participants – everyone from their junior high school, counting their teachers and mentors. Some of the passersby would stop and ask about the event – what is going on? What’s this get-together about? The students would then explain and elaborate.
The urban game began on the school’s premises, where participants learned what it would be about, its objectives and run of events. They listened to a short introduction on the history of Grabów Jews, received maps and auxiliary booklets on Jewish history, tradition and culture info that had been prepared by the organizers.

At one of the prewar tenement houses that once was home to Jewish tenants, students learned about engagement and wedding rituals in Orthodox families. Is betrothal an obligation? Who is the matchmaker? How did orphans and dowry-less daughters manage to find husbands? Students answered questions, and solved word puzzles. What will you get by combining the first three letters of “shah” with the word “bat”? What does this term signify?

Under the fire department building mentioned to students by Mrs. Antonina, game participants connected the dots to see what the image would reveal.

Anyone knowns what a Star of David is? Does anyone know the answers to all the other questions?

On Kościuszko Square, Grabów’s main square, participants were having fun while learning, solving a knowledge quiz. Under the building that used to house a cheder, one of the female tour organizers talked about the school and its students if Grabów still had Jewish residents. The group listened and tried to complete the next task at hand – this time a word puzzle.
Next to the building that was once the synagogue, participants learned about the latter; can a synagogue be compared to the Christian church? What does a synagogue look like? What is a bimah, what about babiniec [the women’s section]? What are the symbol inside, what is a menorah?

On the way to the cemetery tour participants solved quizes and considered elements shared by Judaism and Christianity. At the cemetery, participants studied tombstone symbols and the meaning behind an open book, a pitcher with pouring water. At the very end of the tour, on Ogrodowa street, students did puzzles that presented images of the former synagogue, cheder and Jewish tenement house. The game ended in the school, where all scores were tallied up and participants were awarded certificates.

What I will remember best is the walking tour, which had been an amazing experience. Up to now, I had no interest for Jewish culture and did not even know a synagogue, a cheder and a Jewish cemetery all existed in our municipality.

It all fascinated me. I could not stop talking about Jewish culture after coming back from the workshops.

I learned so much about Jewish culture. Thanks to the project, I learned to work with others more.