Gródek lies not far from the Belarussian border, on the Supraśl river. It is considerably large and surrounded by green areas, while its history is strictly ties to its bygone Jewish presence. First Jews arrived in the 17th century; by 1789, the town had 24 Jewish residents, while in 1808 Jews comprised half of the village’s population. They were manual workers, weavers and spinners, petty merchants and craftsmen. Jehuda Kronenberg and Hirsz Luński set up a textile production plant. In the interwar period Gródek had a few cheders, two betht midrash, two Hassidic prayer halls and three synagogues. Jewish schools existed as well, Bundists and Zionists lived next to each other and the drama club headed by Josef Abramicki was active and put on performances of “Anna Karenina” and “The Jackpot”, among others. The 1931 census listed 2334 residents of Gródek, of whom 1385 (59.3%) were Jews. Chaim Nowiński, Rafał Mełamdowicz and a few other Jews were members of the municipality board.

None of the synagogues, beit midrash nor prayer halls still stand in Gródek. The predominantly Jewish village disappeared almost completely. The ghetto was created in 1941; in early 1942, 28 Jews were executed, while the rest were sent in November 1942 to a transit camp in Białystok and from there on to Treblinka. Only a handful managed to escape from the transport; among the escapees were Nachemiasz Szulklaper and his sister. The only monument commemorating Jews is that in honor of the 35 victims murdered at the Jewish cemetery. The cemetery is located on the outskirts, right by a forest. Only fragments of gravestones survived.

Most students of Gródek’s junior high school had no previous contact with any Jewish topics. This is why they soaked up information like sponges, asked questions and listened to answers. They dwelled and pondered over various matters, learned new terms and foreign-sounding words. They analyzed and discussed what Gródek might have looked like prior to 1939, the location of the Jewish cemetery, synagogues and the cheders. They were introduced to the Jewish calendar and the different holidays connected to it. When and how does Shabbat begin? What to eat on Hanukkah? How does Yom Kippur end? Students talked about World War II, the Holocaust and shared their reflections. And once everything was pieced together, they began crafting a walking tour for local residents. They would hold work meetings and consider different options. They read prewar newspapers, looked into academic publications and collected personal testimonies. They looked for photographs and objects, listened to Yiddish songs and planned the form their project would take and the activities they would prepare for their guests. The school’s newspaper wrote about their work and the local media published their open invitation to participate in the event.

On the day of the walking tour everyone gathered in front of the school building, School of Dialogue students and their guests: elementary school students, school principals, town councilors, ladies from Gródek Housekeepers’ Group and teachers. After everyone was greeted and handed the plan of the walking tour, the whole group headed toward Fabryczna Street. 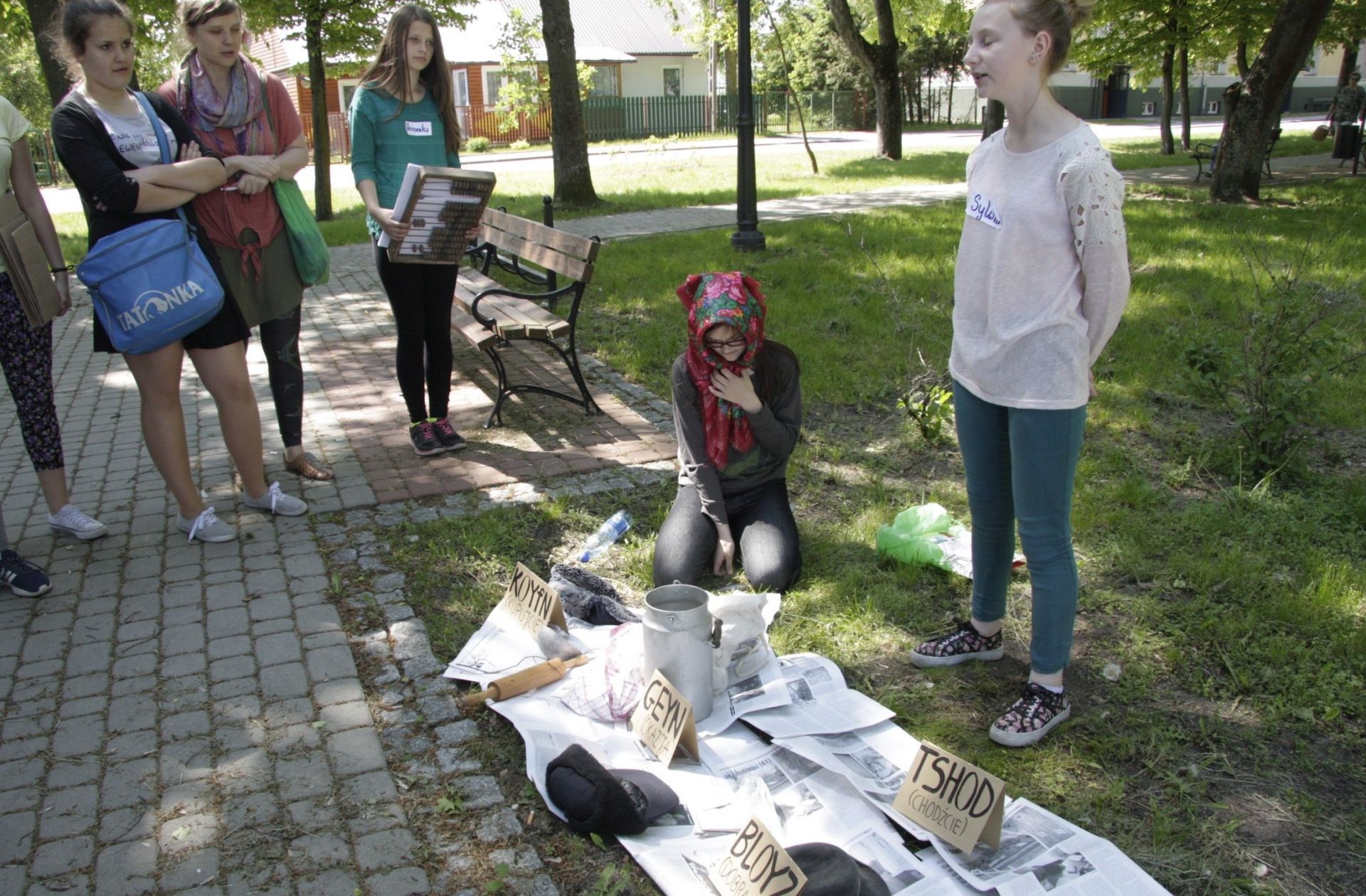 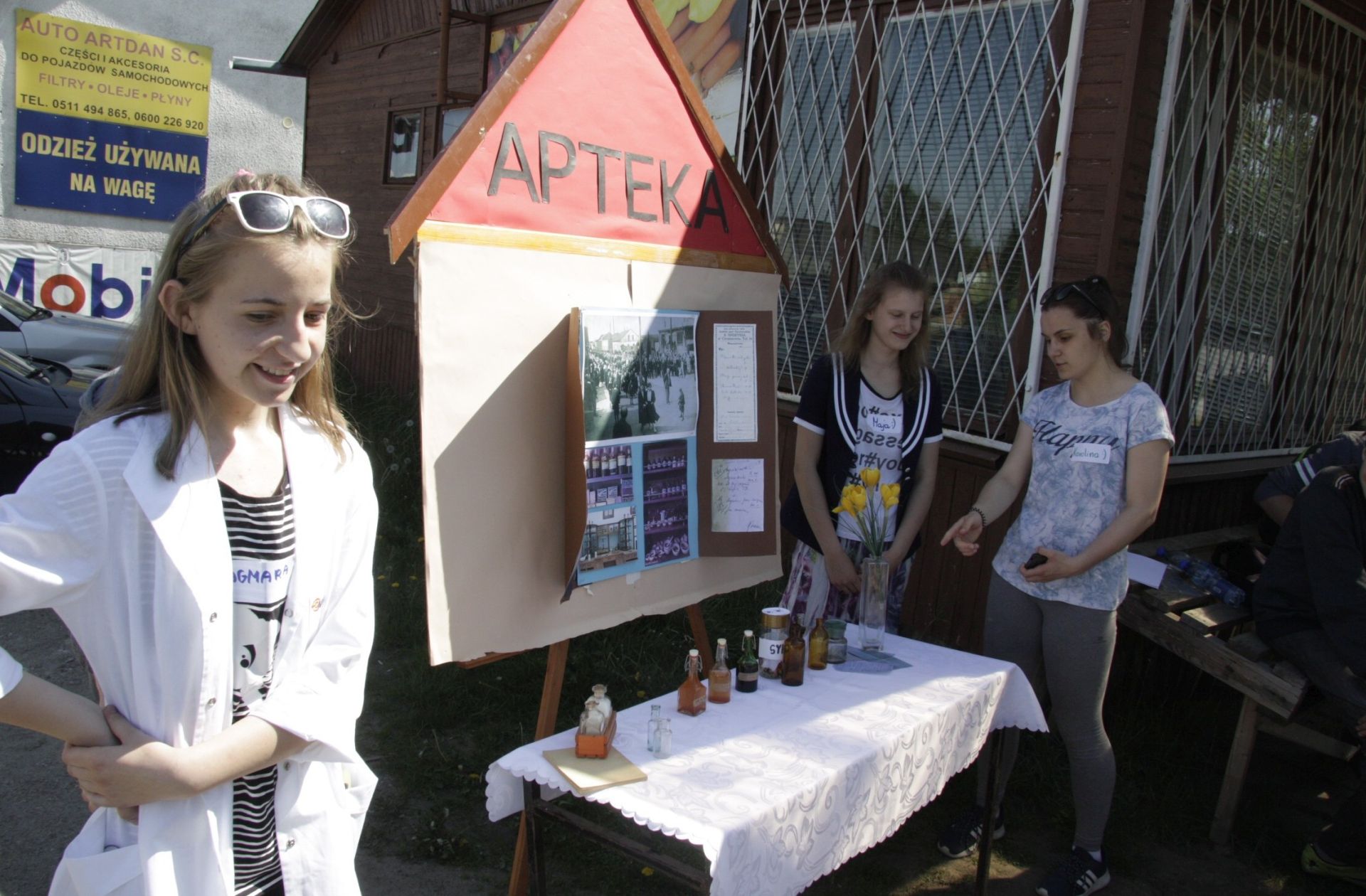 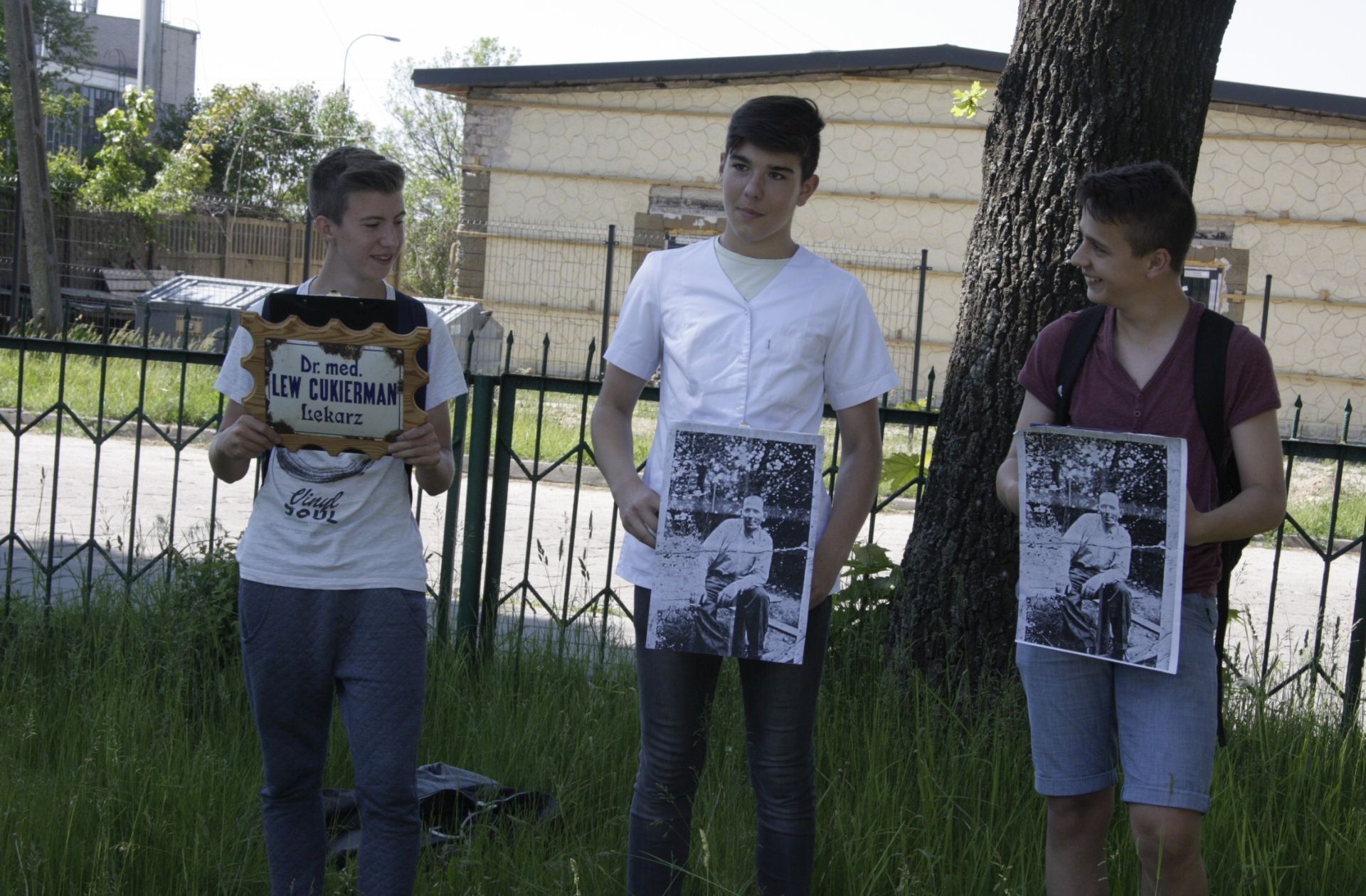 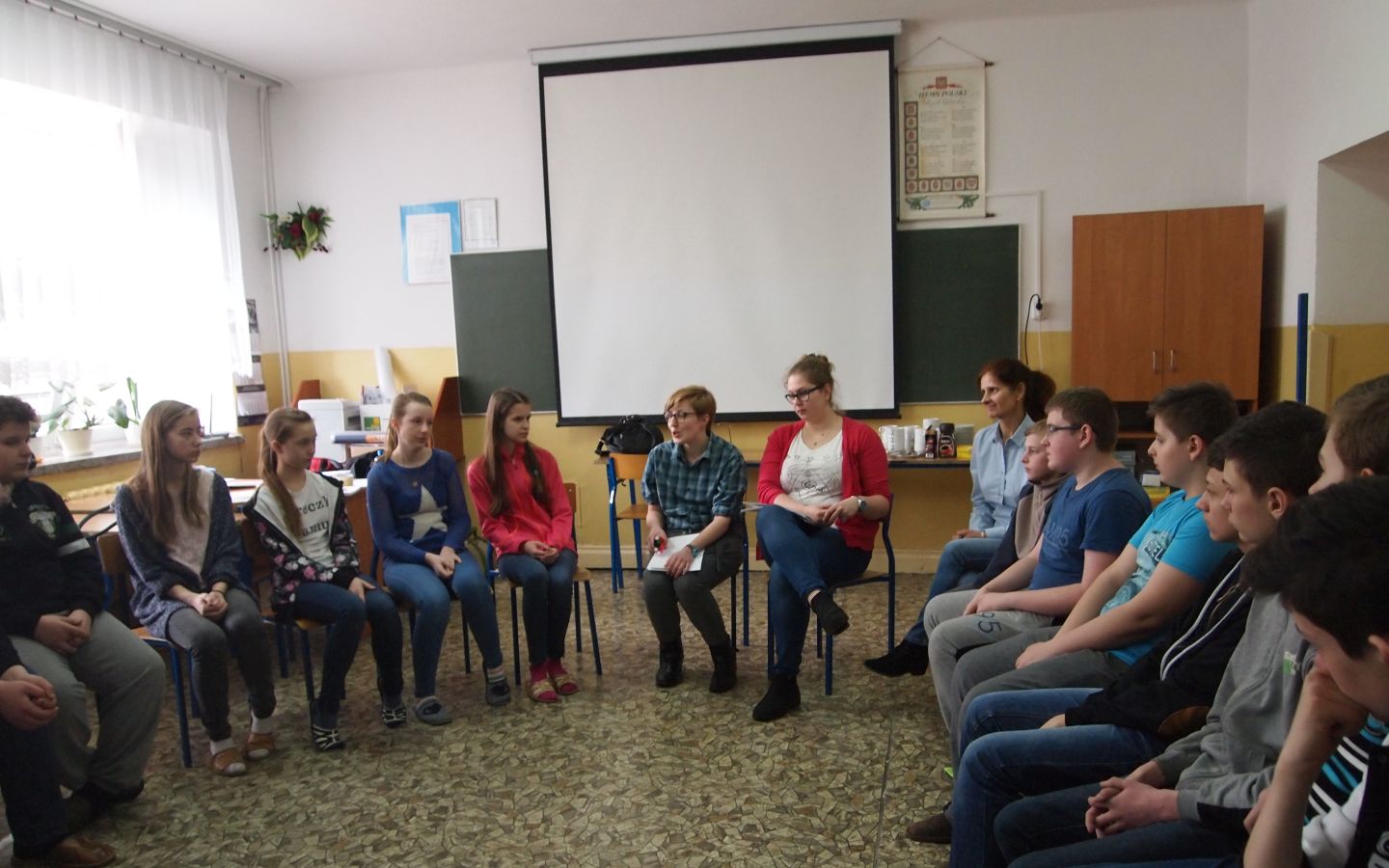 There, in front of the Health Center Michał, Damian and Kamil recounted the story of Lew Cukierman, a well-respected doctor from Gródek who headed the Center before the war. Further down on the same street (named “Factory Street” in Polish) tour participants passed sites of former production plants. Sebastian, Bartek and Damian took turns explaining which plant stood where, their histories and who owned which one. In 1907, the 22 textile production plants in Gródek employed 576 people. At the intersection of Przechodnia and Chodkiewiczów Street, Sonia presented the love story of a Catholic girl and a Jewish boy – Luba Januszkiewicz and Motel Morejn.

During the war, the gate to Gródek’s ghetto was at Koszarowa Street, as guests learned from Serafin, Rafał and Henryk. The second gate stood in the eastern part of Fabryczna Street.

Moving down Chodkwieczów street, tour participants passed plots that were occupied by Jewish restaurants before the war; Liza’s restaurant here, Fejga’s there – the site of the latter was where Karolina, Aga and Wiktoria treated the group to challah bread and refreshments.

A few steps further, Weronika and Natalia talked about Gródek’s prewar Jewish schools; about the Tarbut school, the I. L. Perec Public School, Polish school for Catholics and Jews and about the preschool that also existed.  The Perec school was the best and the strictest of them all and paid for textbooks of children from the poorest families. It is said that during the holidays, the school would organize field trips and meetings for its students.

Later on, walking down Południowa Street, the group reached the intersection of Fabryczna Street and Chodkiewiczów Street, where Szulklaper’s pharmacy once stood – a story recounted this time by Maja, Karolina and Dagmara.

Walking along Chodkiewiczów one reaches the junction of Michałowska and Białostocka streets. One of the houses there was home to Josef Abramicki, considered by Grzegorz, Kamil and Patryk the Leonardo da Vinci of prewar Gródek. Abramicki was the head of the Jewish drama club, but also a local barber with Jewish, Polish and Belarussian customers. He was also a photographer who spoke five languages and captured with his camera images of the village’s prewar residents as well as its prewar architecture. The present-day park in Gródek was a marketplace before the war. Dressed as street vendors, Julia and Sylwia told the group about the prewar market and commerce as well as what kind of goods were traded by local Jews. The plot between the present-day Cultural Center and the Municipal Office, where the synagogue stood before the war, served Kaya and Aneta as a backdrop for the story of the synagogue and of a few others; how many synagogues were there altogether, where they stood, what happened to them. That of the five that existed, one was a brick building. That all of them were active, but now nothing remains of them. The tour was supplemented with photographs, pictures and objects that were to help tour guests understand the stories presented by the students.

At the very end of the tour, back in the school’s gym, students presented a shadow play they had created, entitled “Holocaust of Gródek’s Jews”. It was a sad yet moving piece, followed by a minute of silence by both the spectators and actors.

After the event, the Gródek Appreciation Society suggested to publish all the collected materials; while the June edition of Gródeckie News (Wiadomości Gródeckie) featured an article by Irena Matysiuk entitled ”A Sunny Tuesday. First Year Students from the Junior High School Embark on a Route Tracing Our Prewar History of Jewish Community in Gródek.”

Thanks to this project I now feel connected to Gródek’s Jewish history.

I learned a lot about Jews that once inhabited Gródek and my attitudes towards Jewish-related topics have changed.

Gródek, which before seemed to be a small village, now seems great to me.