School of Dialogue at Stanisław Staszic School Complex No 2

Poland’s eastern-most city Hrubieszów is located on the Huczwa river. In 1939, Jews comprised 68% of the town’s population. Once a synagogue used to stand here – first a wooden one until it burnt down, then a brick one later on. Both stood at the intersection of Szeroka Street and Pogodna Street; not a trace of either remains. The badly damaged brick building fell into ruin and was later sold to a private real estate developer to be eventually demolished The corner of Krucza (once known as Kierkutowa Street, or Jewish Cemetery Street) and Targowa Streets used to be the site of a Jewish cemetery, founded sometime around 1587. It occupied a large area before the war, now just a section of it remains, a kind of witness to the sad history of Hrubieszów. Only few of the 16th and 17th-century matzevot, richly decorated with floral and faunal motifs, can still be seen. Some of them were removed by Germans for paving roads and squares, others were stolen by local residents for the same purposes after the war. The last burial at the cemetery was held in 1941. Later on, the cemetery was used only as execution grounds. After the war, in the 1980s, Hrubieszów’s mayor Kazimierz Łukiewicz worked to save the cemetery, to bring back its original form and its memory. With a group of school students and other people, he recovered some of the headstones that he then returned to the cemetery.

From the damaged headstones Mr. Łukiewicz built a Holocaust memorial in the form of a lapidarium.

Now the cemetery has a fence and is no longer filled with overgrowth, with a lapidarium, monument and around 40 matzevot, all in good shape, with some inscriptions still legible. The keys to the cemetery can be obtained at 20 Krucza Street.

There used to be another cemetery in Hrubieszów – the New Jewish cemetery. Its location at the road leading to Gródek, where you now have a square, is marked on a town map from 1876. Allegedly the cemetery is there, but it is as if it never existed, as no one was ever buried at that site.

The building at 31 Partyzantów Street, once the headquarters of the sanitary inspector, was one of Hrubieszów’s three hospitals, erected in 1844 with many subsequent alterations. The building almost right next to it at 11 Partyzantów Street, now a local music circle, once served as a cheder. There was also a brewery, a printing house and a kosher slaughterhouse, two steam mills and sutki, where you would go to buy herring, bread, kerosene and leather. All this built by Jews sometime in mid-19th century in what was then a Jewish district. The area to the west of New Market Square: Ludna Street, Jatkowa Street and Rynek (Main Square) itself. The area later would become the ghetto. Street names remain unchanged. 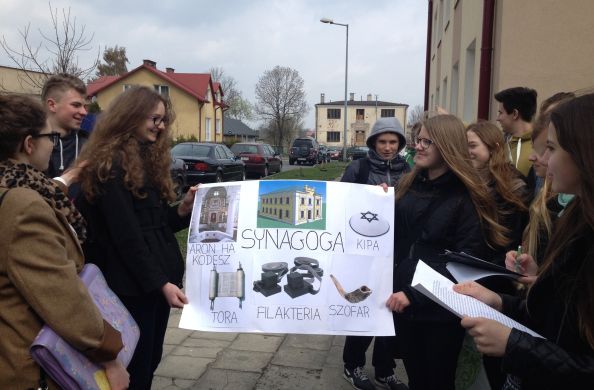 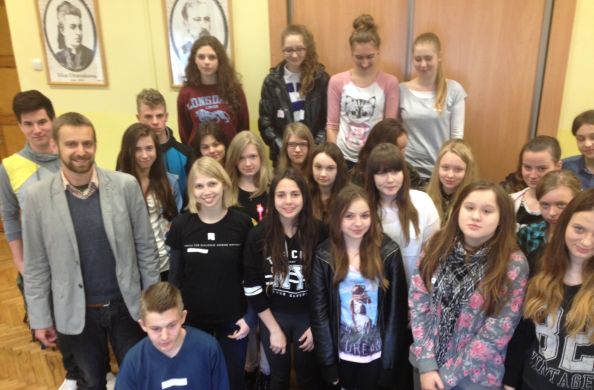 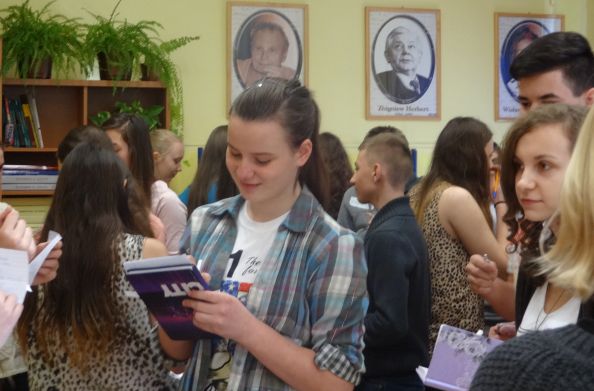 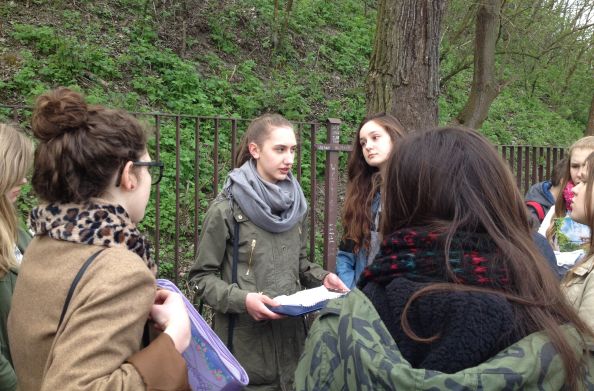 Workshops led by Forum for Dialogue educators, Małgorzata Nowicka and Katarzyna Pietrzak, consisted mostly of discussions and reflections on multiculturalism, what it entails and how to approach it. A lot of attention was given to Jewish calendar and Jewish holidays. Students became very involved in planning their tour of Jewish Hrubieszów, which resulted in a detailed and well-planned route with a number of attractions. The tour was intended for Hrubieszów’s mature population – participants included local historian Mr. Łukasz Krawczyk, the aforementioned Mr. Kazimierz Łukiewicz, school’s deputy principal Ms. Czesława Semczuk and dr Agnieszka Jamroż, historian from Staszic High School. Deputy mayor Paweł Perelmutter joined the tour and so did the local parish priest who lent students audio speakers. A few more people joined just because, out of curiosity to learn more. They had seen the posters so they came. Local newspaper would write about them and the local radio would follow up with a report on the tour. That it led participants to the site of the former synagogue at the former Bóżnicza Street (Synagogue street), then to sutki where people used to buy kerosene.

And that the tour led participants to Huczwa river, where the poorest Jewish residents used to live and then on to Kilińska Street, where the richest had their homes. That the group went to look for traces that remain of the old Jewish hospital and to see how the Jewish cemetery looks nowadays and where it should also be visible. That participants stopped in front of the plaque commemorating Polish-Jewish author Bolesław Leśmian as well as in the Regional Museum. And that they talked about what everyday life was like in the past. By showing a shofar, a talit and a kippah, students helped their guests learn about Jewish faith and religion in a more vivid way; through quoting poetry by Leśmian and Słonimski – understand a little more. And the hamantaschen cookies they had prepared simply helped fend off hunger.
Just before the school year ended, students managed to organize a few more tours, this time for their fellow students, as an experiential history lesson. At some point, during one of the tours students realized that the old Jewish homes in front of which they would stop to tell their listeners about Shabbat, had disappeared. And now they are gone.

I think our project was a success. It turned out really well, I would love to take part in such workshops again.

What’s most important is that we led a walking tour around our town in the course of which we talked about Hrubieszów and its Jewish residents.

I truly loved these workshops. I never learned history in such a pleasant and fun way before.