In 1744, Polish Kingdom’s assessors’ court verdict forced Jews out of Tarnogóra. They were forbidden from returning and threatened with imprisonment upon any attempt at trying to conduct any kind of business within the city limits. In all likelihood, such a decision was pushed by Christian artisans and merchants who saw Jews as dangerous competitors.
The exiled Jews were settled in Izbica, which from that point on became an exclusively Jewish town. Only in 1870s did Christians start to appear and settle on the outskirts of the town. This settling process was gradual and peripheral, and in 1939 the vast majority, or 84% of the town’s population was Jewish. Izbica was home to Mordechaj Josef Leiner, one of the most prominent tzaddiks in the Polish kingdom, who started his own Izbica-Radzyń dynasty. Tzaddiks Rabinowicz and Landau also called Izbica their home. It was a Yiddish town; a town of traditions, with no modern schools up until 1921.

And it was also a town of Aktion Reinhardt, codename for the Holocaust in General Government and Białostocki region. A town of a transit ghetto, created for Jews from Bohemia, Moravia, German Reich and Austria. Jan Karski, who had spent a few hours inside this ghetto camouflaged as Ukrainian guard, would later write about a screaming crowd, sense of uncertainty and animal-like fear.

He would also write about an elderly man sitting on the ground rocking back and forth, his eyes glistening. And that no-one seemed to notice that right next to him lay a child, twisting in convulsions. On November 2, 1942, liquidation of the transit ghetto began. Some of the Jews were deported to Bełżec and Sobibór death camps, some were rushed to the Jewish cemetery and shot there. Allegedly only 14 local Jews survived the war.

Not much survives from prewar times. One house with an attached sukkah still stands, and so does the train station which was the point of departure for cattle trains heading to the two death camps. Then there is also the Jewish cemetery, as it would be difficult to make it disappear completely. An 18th-century cemetery on a hill over Fabryczna Street, first devastated by the Germans and with the remaining headstones used as a building material by the local population already after the war. Only three tombstones remain intact, with fragments of over a dozen more headstones scattered around the area. Headstones carved in sandstone and granite. The oldest one dates back to ca. 1823. A memorial also stands at the cemetery, owing its existence to priest Grzegorz Pawłowski and his brother Chaim. Priest Pawłowski and his brother were brought up in a Jewish orthodox family in Izbica; during the war, Pawłowski was given a new identity. After 1945 he was baptized and ordained a priest. He found his brother Chaim in Israel. 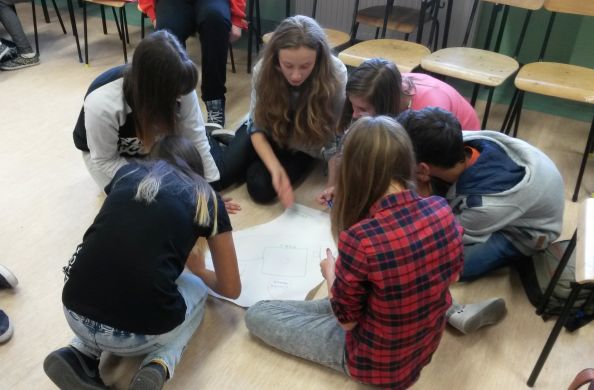 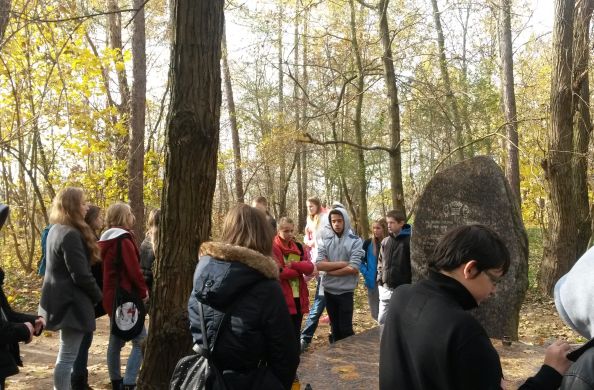 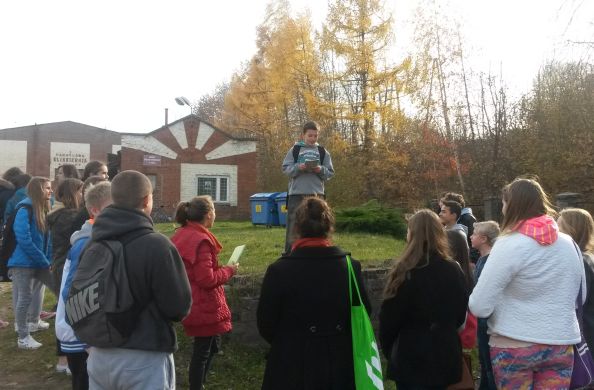 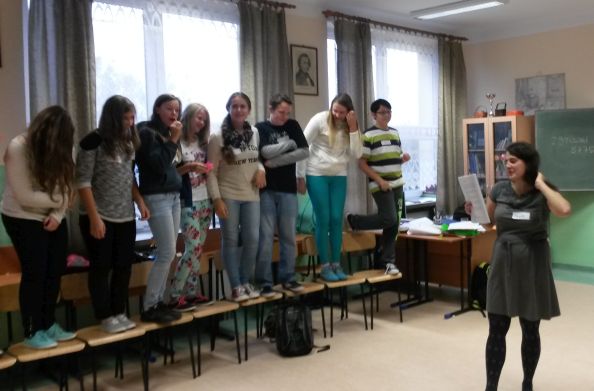 Tzaddik Leiner’s ohel also stands at the cemetery. His descendants initiated its reconstruction in the 1990s. Later, some of the few hundred matzevot recovered from the former Gestapo jail, which had been torn down, were embedded in the eastern wall of the ohel. The oldest of these dates back to 1785. The remaining headstones are to be embedded into the cemetery wall, which is to be erected soon.

School of Dialogue was held in Izbica Lubelska, this once-Jewish town, from which the Jewish presence has been all but completely renounced.

Youth from Konopnickiej Junior High School began to dig and dwell on the subject matter; to conduct research and to ask; to scour and to talk. They collected materials, planned activities and divided responsibilities. They cleaned up the cemetery and threw out the bottles they had found there. They organized a small exhibition of drawings, photographs and posters. They met with Ms. Ewa Koper from Bełżec State Museum, which they visited a few days later. Once there, they listened to Sara Salzberg’s written testimony from Bełżec a day before the death of her son on July 26, 1942. They then lit candles, with each student trying to honor the memory of the victims in his or her own way, however they felt comfortable with.

On December 2, students organized a walking tour for the town’s residents, policemen and cooks. And for the reporter from Channel 3 of Polish National Public Radio.

The tour began with the exhibition at the school. Next, the group visited the site of a house that belonged to Tomasz Blatt, one of the few Holocaust survivors in Izbica Lubelska. Students explained what it was like then and how did Mr. Blatt manage to survive. They moved on, leaving behind them a board informing about the building’s resident and why the passersby should stop and ponder. By the railway ramp, students talked about Sobibór and Bełżec, quoting Jan Karski’s writings as well as the testimony of Ms. Błaszczyk, a Polish Righteous Among the Nations. Ms. Błaszczyk’s house was a subsequent stop on the tour, perhaps to have everyone ask themselves a question what they would have done in her place.

Later the group headed to Izbica’s Main Square, where they looked around and compared what they saw with the prewar photographs. The group visited the site of the synagogue that is no longer there. As tour participants examined photos, one of the boys told them why women and men would pray separately and why the most affluent community members would stand right by the bimah. On Lubelska Street the group stopped by an old house that still has a sukkah attached to it. What is a sukkah, who built it and what for? High school students explained it all. And finally to the Jewish cemetery

The tour’s final stop was a clinker cement manufacturing plant, which used to be the main employer for the local population.

Through these workshops I learned how much people suffered in World War II, and Jews suffered the most.

I understood that in the place I live in, a few thousand Jews had died and the railway ramp should be a place of somber behavior, as people were dying also there.

I can say that if it wasn’t for School of Dialogue project I would probably not know anything about this town nor what had happened here. Such projects should be organized for all town residents.

School of Dialogue program in Izbica Lubelska was made possible by the support from BEATRICE CRAIN.