Jasło is a town in south-eastern Poland in Podkarpackie Voivodeship. Its name reportedly derives from the Jasiołka river, which flows through the city.

At first, Jews were not allowed to settle in Jasło, then the ban was lifted by king Casimir the Great. Later, after the introduction of the De non tolerandis Judaeis privilege, they were again prohibited from settling, and finally, after the first Partition of Poland, it turned out that they were allowed to settle after all and that nobody could forbid them from doing so. It was then that the Jewish community started developing, expanding and often assimilating. Jews were involved mainly in trade and had their own Credit Union. In the second half of the 19th century they built a mikveh for women, a cheder and a temple, and finally a Kahal was established. In 1905, a synagogue was built in the place of Koci Zamek, an old fortified manor.

Young Jews belonged to various independence organizations, some of them were scouts or supported the Polish army. Jewish merchants supplied the Polish Legions with wool and cigarettes. They participated in national celebrations and patriotic actions. In the interwar period, Jews comprised 25% of the population (Jasło had 10 thousand inhabitants). They worked mainly as cobblers, hairdressers and tailors; and the wealthiest – as doctors and lawyers.

Jews owned two brickyards, the “Luna” shoe polish factory, a tannery and a brush manufacture, flour mills and lumber mills, inns and transport companies. After the outbreak of the war, all local Jews were counted and registered. They were not allowed to move house or travel using public transport, and were deprived from the right to get involved in political, educational and cultural activities. At the end of September, on Yom Kippur, Germans blew up the synagogue. Meilech Zukerman was the last rabbi there.

In winter of 1942, Germans murdered 40 (or presumably even more) Jews on the Jewish cemetery in Jasło. At the end of May, they shot 1,500 local Jews in the woods near Warzyce. Another execution took place at the beginning of June. Yet another massacre was organized in July, in the woods near Krajowice, where 260 Jews from Frysztak, Kołaczyce and Bieździedza were killed. In 1942, Germans established a ghetto, where they moved Jews from Jasło, Frysztak, Jedlicz and Bieździedza, as well as from the Krosno ghetto. Soon afterwards most of the Jews were taken to the extermination camp in Bełżec and a small group was transported to the camp in Szebinie. Also a dozen or so Poles, who helped Jews hide and survive, were taken to Bełżec. Those who were not taken to camps, were forced to work. 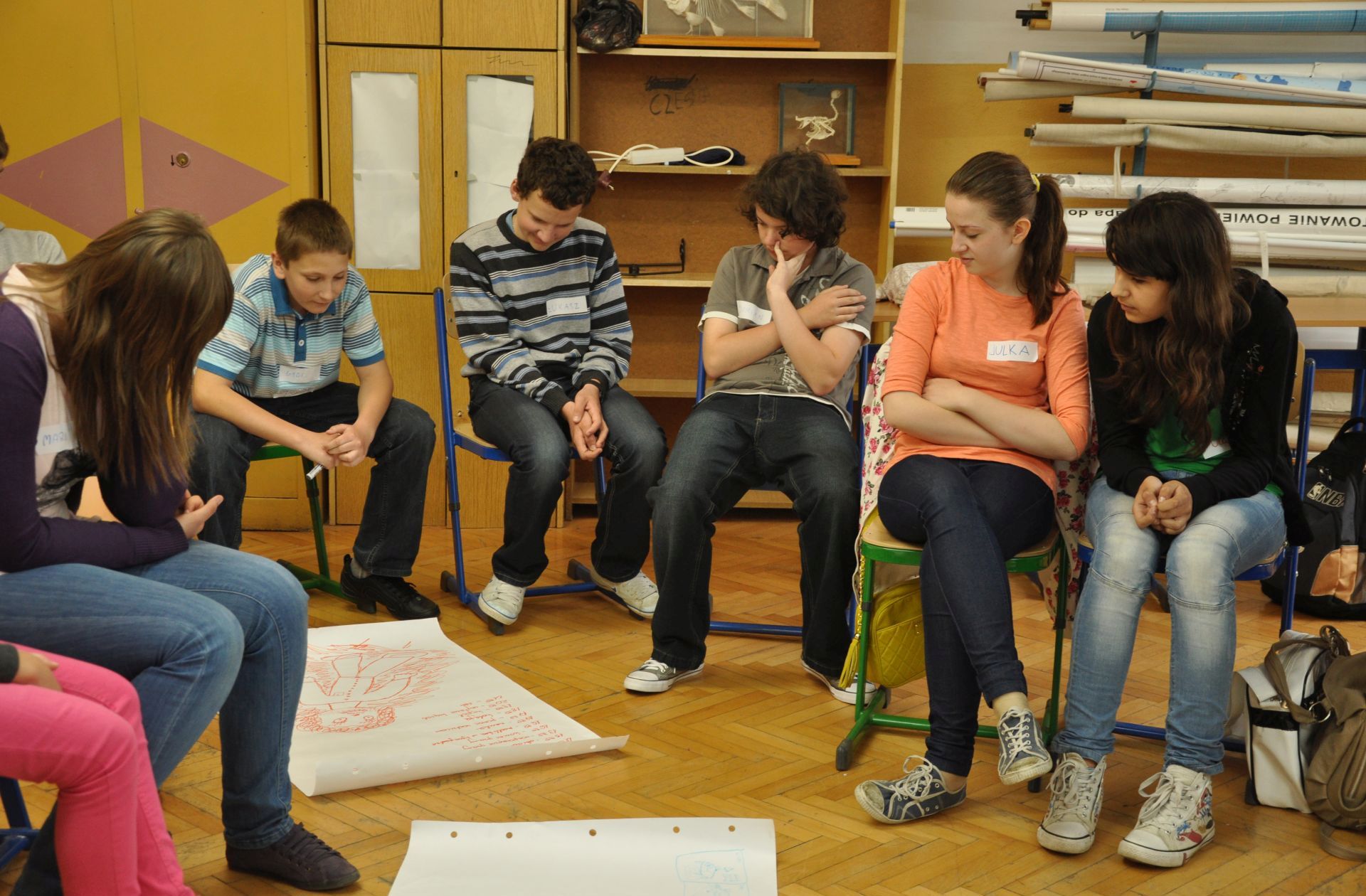 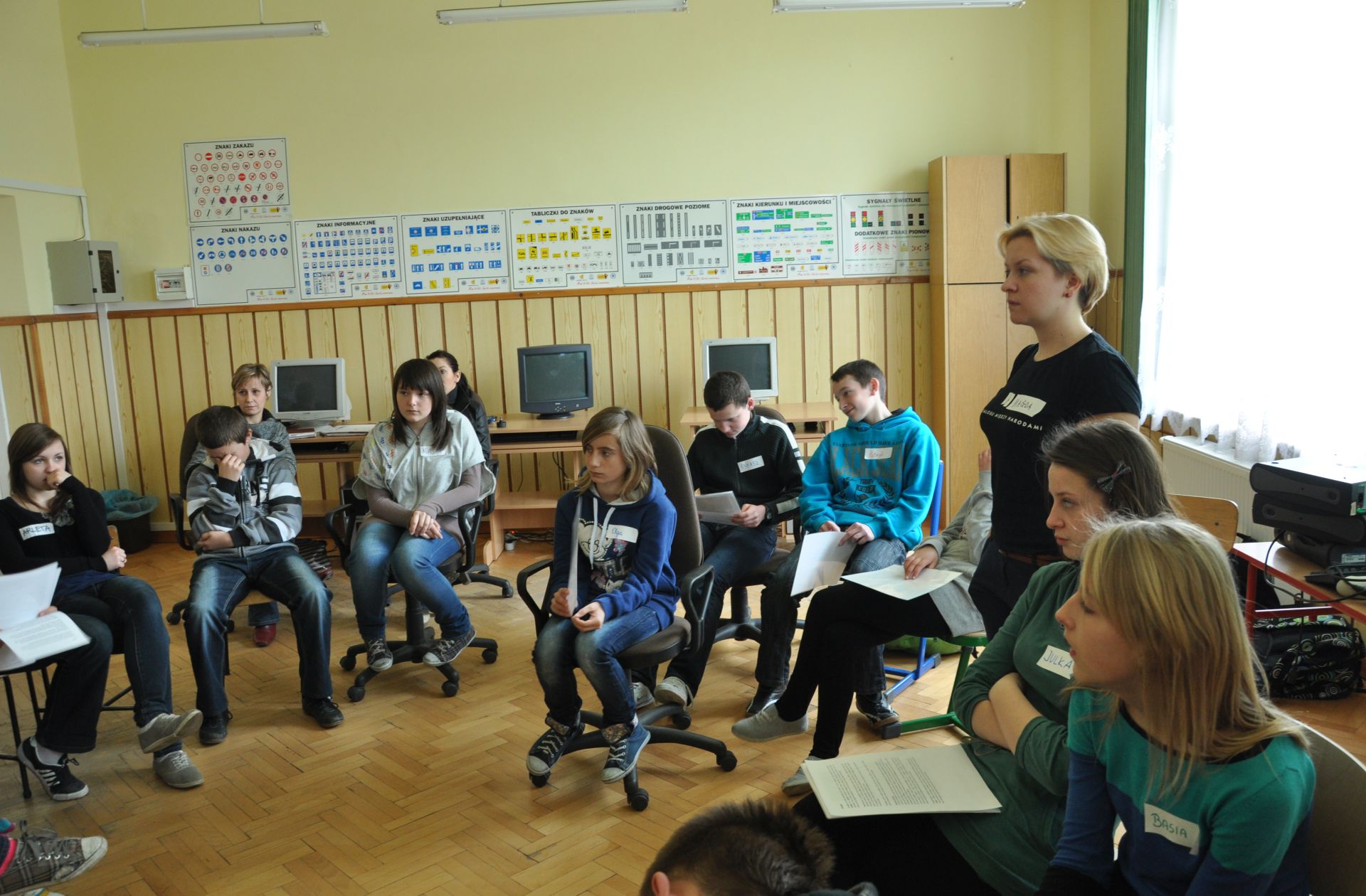 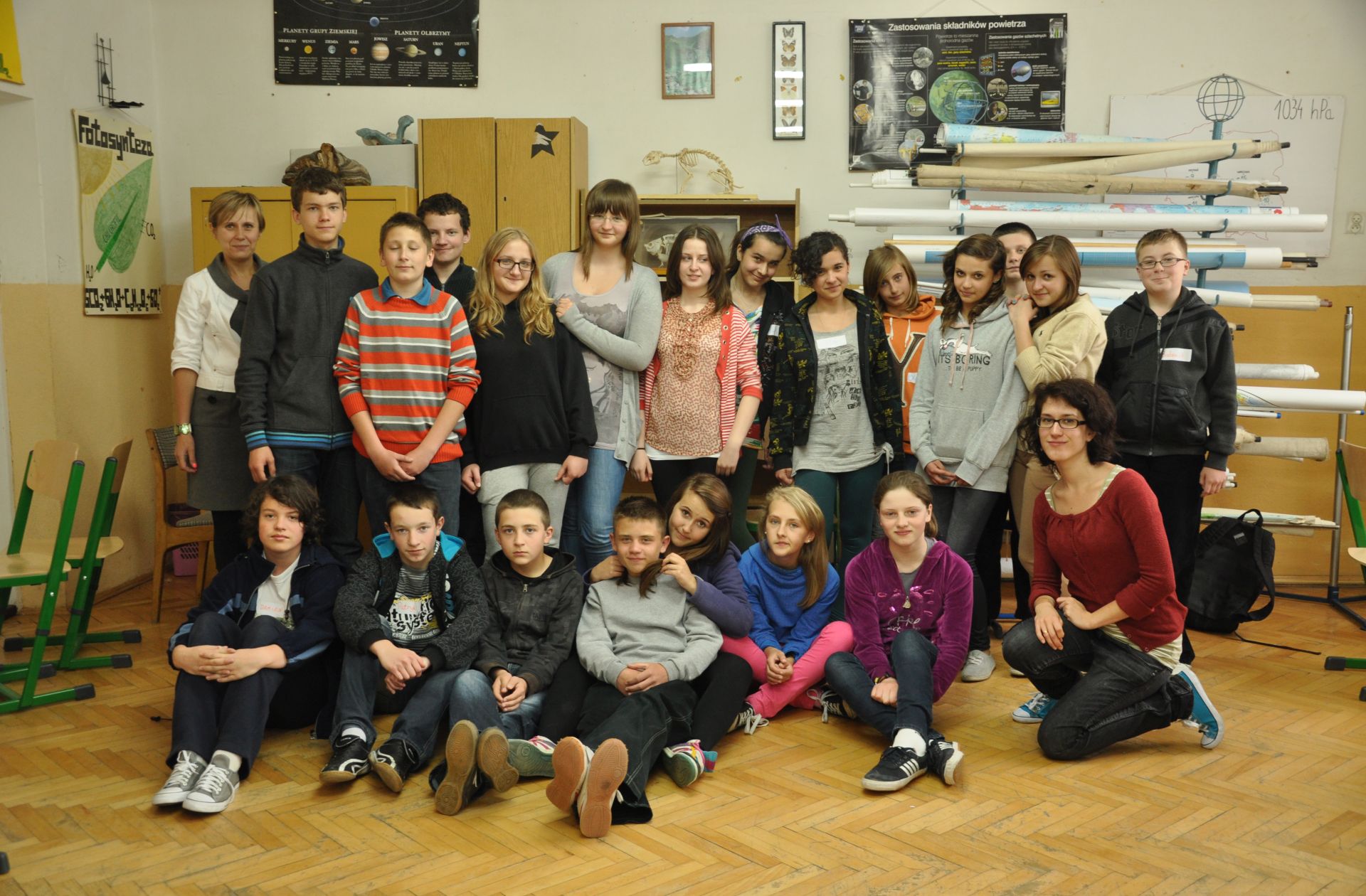 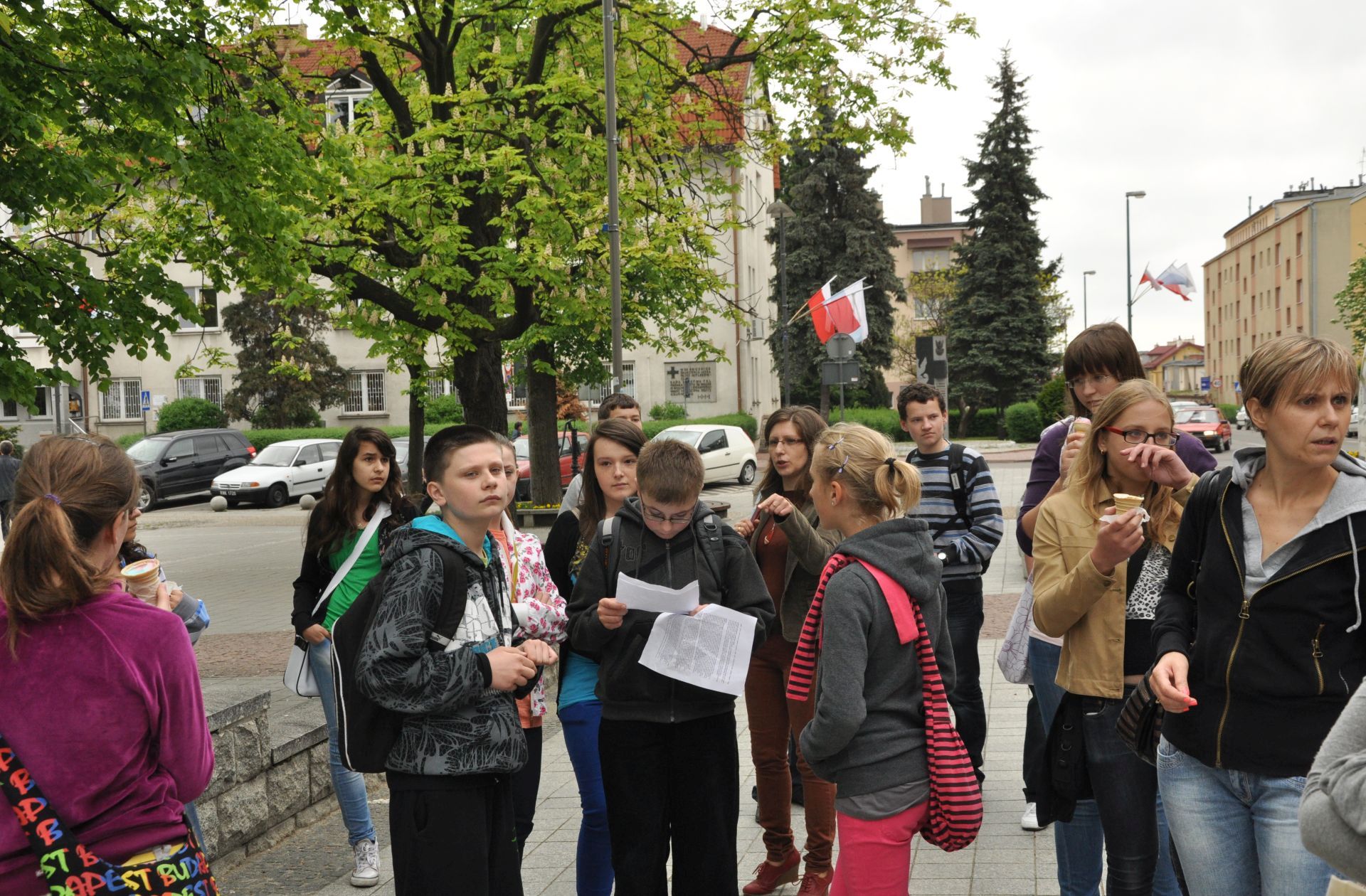 In July 1943, the gestapo found and shot 19 Jews who had been hiding near Osobnica. Three days later, on August 3, 1943, ca. 690 Jews from Jasło were executed in the forest near Warzyce. The town was completely obliterated and no Jewish property survived the war, except for one wall of the synagogue. The tombstones on the neglected graveyard are barely legible. A monument in the cemetery commemorates the victims.

The school whose students participated in the workshops and the project is located far from the city center, far from the place where the synagogue stood and far from the Jewish cemetery. Therefore, on the day of the tour (May 28) the students simply hired a bus. They would tell the driver where to go – and off they went. In their imagination, they wanted to reconstruct the city which no longer exists. They wanted to bring back the history: forgotten, neglected and abandoned. They wanted to show where local Jews had lived, where the synagogue had been located and what was left of it. Where the cheder, the mikveh and the cemetery were, of which hardly anybody knows anything. So they took the keys from the City Hall and went to Floriańska Street, next to house no 96. The cemetery is visited very rarely, so everything was rusty. One by one, the students tried to open the gate, until someone eventually succeeded. Someone told the story of the cemetery, someone led the way to the monument and showed the matzevot lying around. There used to be a hundred of them, made of marble, sandstone and granite.

Inscriptions on some of them are still discernible. Apart from inhabitants of Jasło, there are graves of Jewish soldiers who served in the Austrian army and were killed during the First World War. There also is an unmarked mass grave of 200 Jews from Jasło who were murdered on September 11, 1942.

Later, the group headed to the Jasło Cultural Center to see Robert Podkulski’s exhibition titled “Hasidim”. There were 30 photographs of Jews on a pilgrimage to Leżajsk, to the grave of their tzadik, Elimelech Weissblum. Indeed, the exhibition was perfectly timed with the tour. All the participants signed the memorial book. Then they went on a short walk and stopped by the place where Hugo Steinhaus’ house used to stand. It was raining and everyone was cold, but they stayed to listen, with more or less interest. Well, so it goes. Hugo Steinhaus was a mathematician, professor, aphorist and member of the Lviv School of Mathematics. They say that his jokes were witty and that his laugh was contagious. Afterwards they visited the place where the Jewish school used to be and later, the place where the Great Synagogue had stood – and now there is a small shopping center instead. Thanks to the courtesy of kind hairdressers, the participants were able to see the remnants of the old walls and basement of the synagogue. The Jasło open-air market is in the exact place where the ghetto used to be – and this is where the tour ended.

I learned a lot about Jewish culture. I did not know that so many Jews had lived in Jasło. Unfortunately, nobody talks about them and they have been forgotten. Before the war there used to be a synagogue in Jasło and now all that remains is a piece of its wall. There also is a Jewish cemetery, but nobody takes care of it.

There were workshops devoted to Jewish life in my school, which I found very interesting. I still don’t know much about it, but I think I will quickly fill the gaps … There are only a few things remaining to remind us of the Jewish community, and not many people remember those days when most of Jasło’s inhabitants were Jewish.

School of Dialogue program in Jasło was made possible by the support from HARVEY KRUEGER.