There are two rivers flowing through Jędrzejów in Świętokrzyskie Voivodship – Jasionka and Brzeźnica. The town’s history dates back to the 7th century, when a settlement bearing the name of Brzeźnica river was first established. Prior to that, the area of present-day Jędrzejów was a swamp.

Jews appeared in Jędrzejów quite late, as only after 1862. Between that year and 1880, around 100 Jewish families lived in the town. Jews were mostly street vendors, barkeepers, merchants and petty industrialists; by 1875, an independent Kehilla was established. When a railroad line connecting Ivangorod with Dąbrowa Górnicza was built on the town’s outskirts, more Jews started to arrive. They would move in from nearby Działoszyce, Sobków, Pińczów and Chęciny. By 1909, 30.9% of Jędrzejów’s residents were Jewish. They would mostly settle around the Main Square (Rynek) and the streets 11 listopada, Pińczowska, Kościelna, Skroniowska, Poklasztorna, Kolejowa, Łysakowska, Browarna, Kielecka and Strażacka.

In 1939, 3 to 4 thousand Jews were living in the town, with the total Jewish population for the county amounting to 9513 people. In 1940, all of them were forced into Jędrzejów’s ghetto, where they lived up to mid-September 1942. Afterwards, most of the ghetto’s residents were deported to Treblinka. Those who stayed were placed in the small ghetto, which was liquidated later, in February 1943. Jews from the small ghetto were taken to labor camps in Częstochowa and Skarżysko-Kamienna.

A few people managed to escape from the ghetto, 80 residents survived the Holocaust: 57 survived the camps, 12 returned from USSR and 11 survived by hiding.

Today, not much remains of this history – the Jewish cemetery on the town’s outskirts has matzevah fragments scattered around its premises. The matzevot that should be there were used to build a small bridge that now is adorned by a plaque reading: “The bridge on this site was built with headstones from the (nonexisting) Jewish cemetery in Jędrzejów.” As if a cemetery could just cease to exist, as if there were no longer bodies buried in the ground.

In search of traces of Jewish presence in Jędrzejów, students peered inside houses and recorded testimonies of the village’s oldest residents. They learned how a market day would look and the specifics of Jędrzejów trade. And that the building of the mill had a Jewish owner before the war. That relations between Poles and Jews were not always stable, being sometimes better and sometimes a bit worse, as the residents said.  From the information they gathered, students prepared a walking tour for their town’s residents, which took place on June 14, a Tuesday. Despite grim weather forecasts announcing rain showers, the tour was attended by teachers, students, local mayor and reporters from a local newspaper, which published a short piece about the School of Dialogue program and the work of the students. 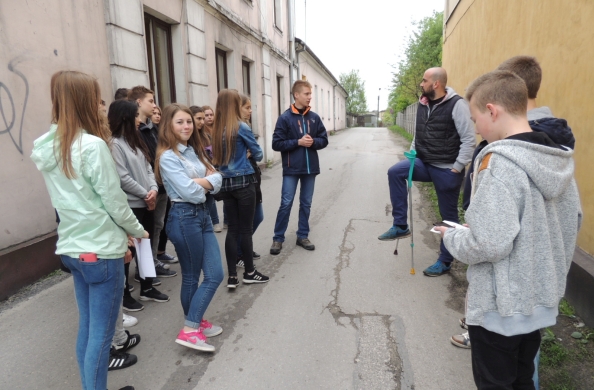 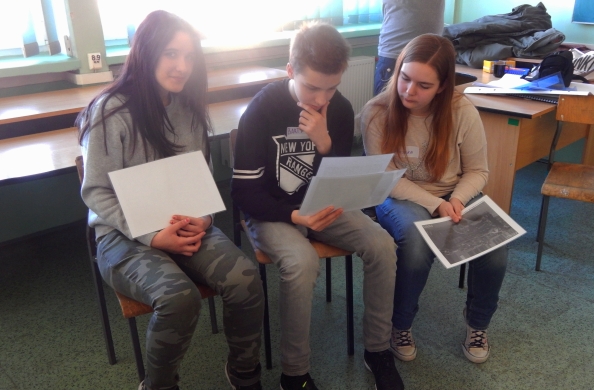 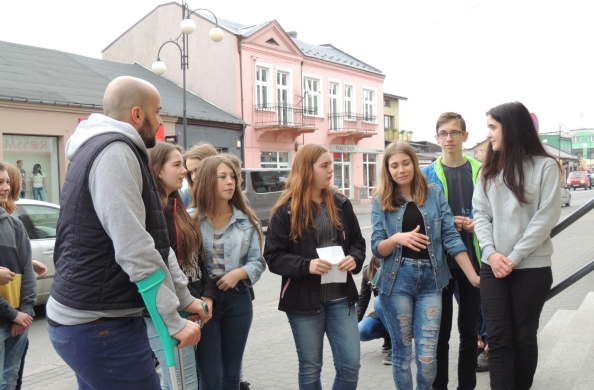 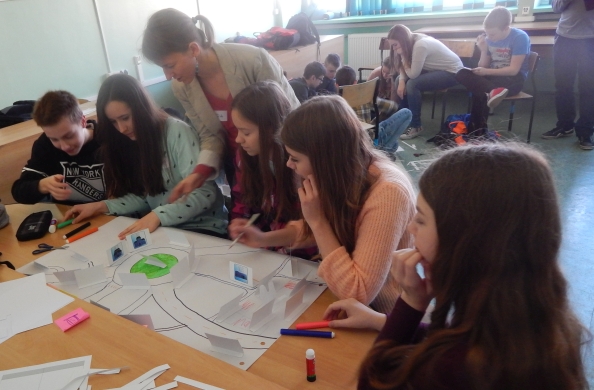 The tour began from the site of where the railway tracks are currently situated; that very place served as deportation point for Jews of Jędrzejów. Students presented a few photographs and described what war meant to the local Jewish community. On the site of the former synagogue one of the students explained a few terms and described the most important Jewish holidays: Chanukah, Rosh Ha-Shana, Sukkot, Pesach and Yom Kippur. He talked about bar mitzvah and a Jewish wedding – what each ceremony would look like, what made a Jewish wedding different from a Catholic one. On the site of the former synagogue students lit a candle as a sign of memory.

On the main square, three female students talked about Jewish trade and described how the area looked like before the war. They talked about Jews from the area all coming in for the market day to sell mostly yarn, but also eggs and livestock. That they were poor and some lived on the edge of poverty and those who were rich were few and far between. Students brought with them photographs they presented and explained how the area changed, what has disappeared altogether. They also described which dishes can be kosher and that pigs and camels are never kosher, and neither are ostriches, eagles and falcons. They explained how consumption of blood is forbidden by Judaism and then treated their guests to challah bread ordered in a local bakery and presented a Shabbat tablecloth.

What is Shabbat and how does it compare to a Catholic Sunday?

The next candle was placed on the site of the former mikveh. Students explained its role and significance in prewar Jędrzejów. They asked if anyone knew what a bathhouse was and how ablutions should be performed – that it must be running water in which one should be immersed completely.

At Pińczowska Street that led out of the ghetto area during World War II, students quoted recollections of senior citizens and showed old photographs. They described Jewish shops, Shabbat school szabasówka and the mill. They recalled the names of brickyard, printing house and brewery owners and explained where the teahouse, beer pub and foundry once stood. Then they laid down the flag of Israel and sang Hevenu Shalom Aleichem and then Am Yisrael Chai.

Students plan to continue their activities and intend to organize an exhibition in their school about Jędrzejów’s Jews. They want to present photographs and further make local residents aware of the history their town has gone through.

Initially I was not interested in Jewish history and I didn’t even know they once lived in my town. These sessions helped me gain a whole lot of information about this minority group … Now I know much more about Judaism.  Through the School of Dialogue, I also learned to teamwork and to be respectful and tolerant.

Thanks to these workshops I was introduced to Jewish culture, but also learned their life in the past and present.