School of Dialogue at the Municipal School Complex in Kazimierz Dolny

During the first School of Dialogue workshop organized in the junior high school in Kazimierz Dolny, the students were only able to locate the synagogue and Jewish cemetery in their town, but were not able to say much about any of these places and knew very little about Jews of Kazimierz Dolny. Yet the town’s Jewish community is considered to be one of the oldest in Lublin area. Kazimierz Dolny itself has a reputation for its welcoming attitude towards multiculturalism, as already in the 17th century it attracted Jewish, but also Armenian and Greek settlers. Up until World War II there were many Jews in Kazimierz Dolny, comprising 64% of the town’s population. Then they were resettled to the ghetto, where they would die of hunger, typhus or in executions. The ghetto ceased to exist in 1942. Students soaked up information like sponges and became more and more active with each workshop, discussing various, often very difficult topics.

They asked about Jewish traditions and religion. Kazimierz Dolny was also no stranger to the Hassidic movement, whose key figure was tzaddik Ezechiel ben Cwi-Hirsz Taub, a disciple of the Seer of Lublin. Now students know about him, too.

During the meeting with a local expert, students heard many anecdotes and stories connected to Kazimierz between the two wars, a time of growth for the town’s Jewish community. A Jewish library was established, along with Maccabee and Sztern sports clubs and a social benefit fund. Private Jewish schools were founded, including a Hebrew school that was opened by local Zionists, whose organization was of substantial importance in Kazimierz. 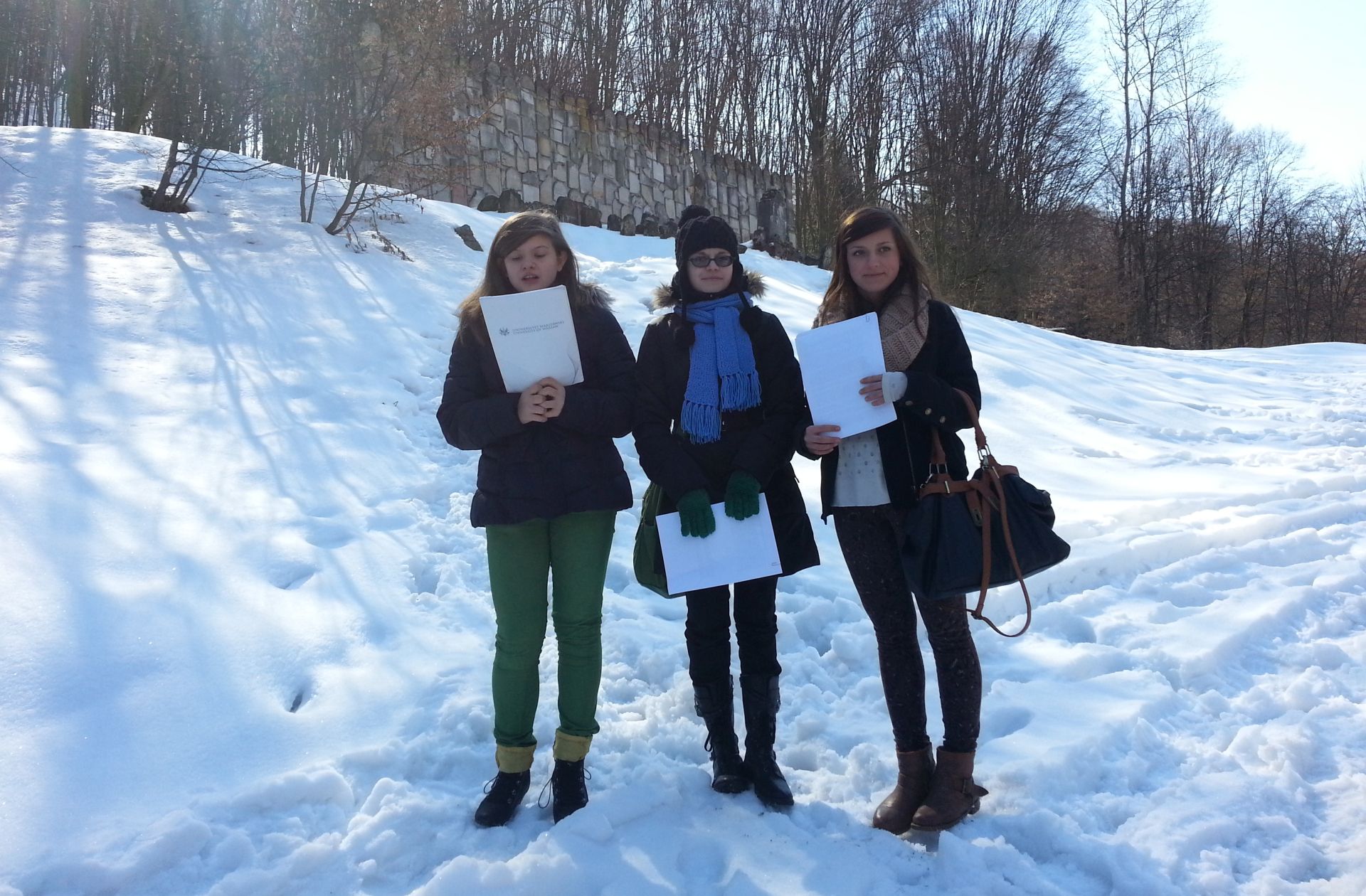 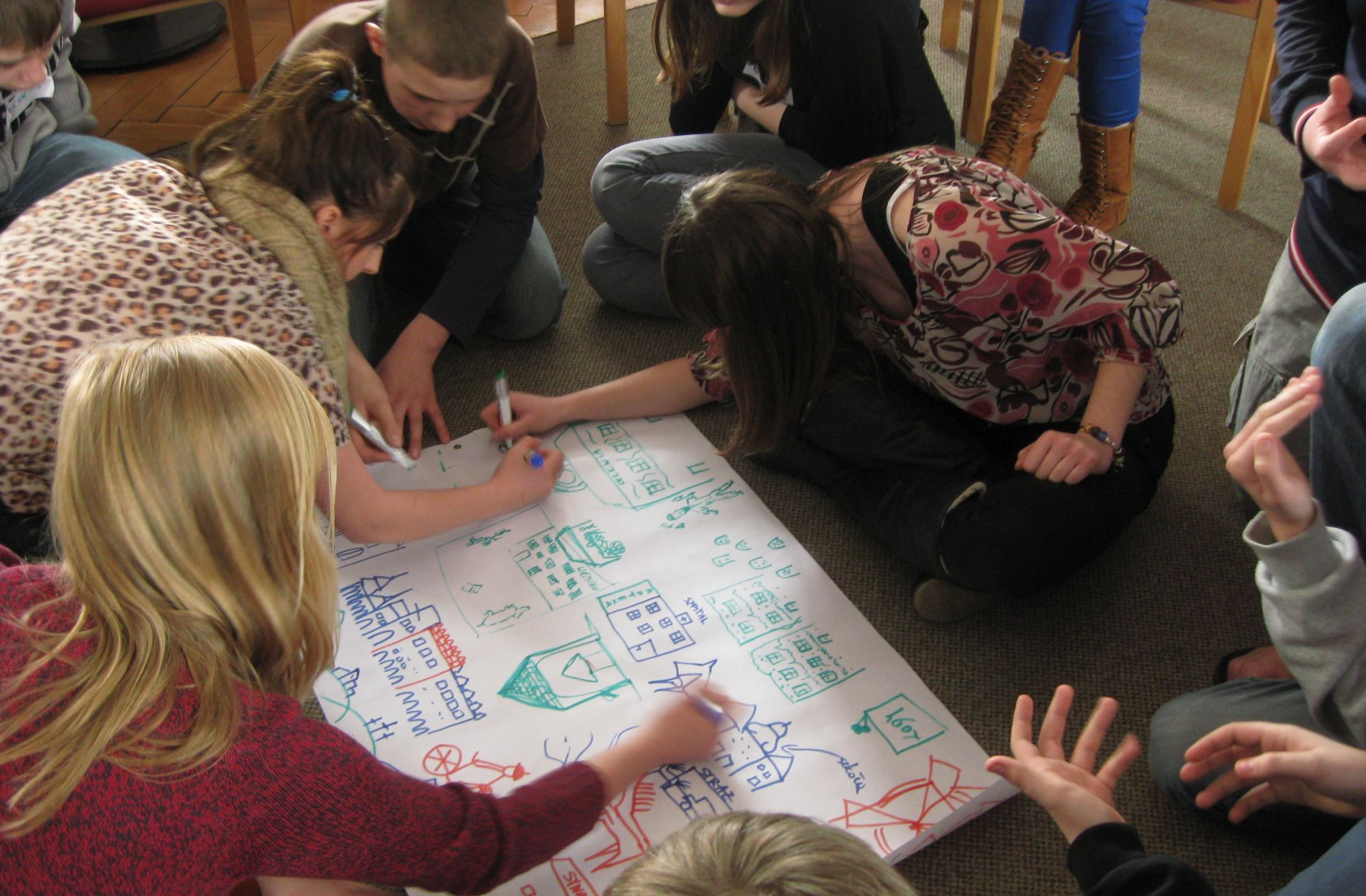 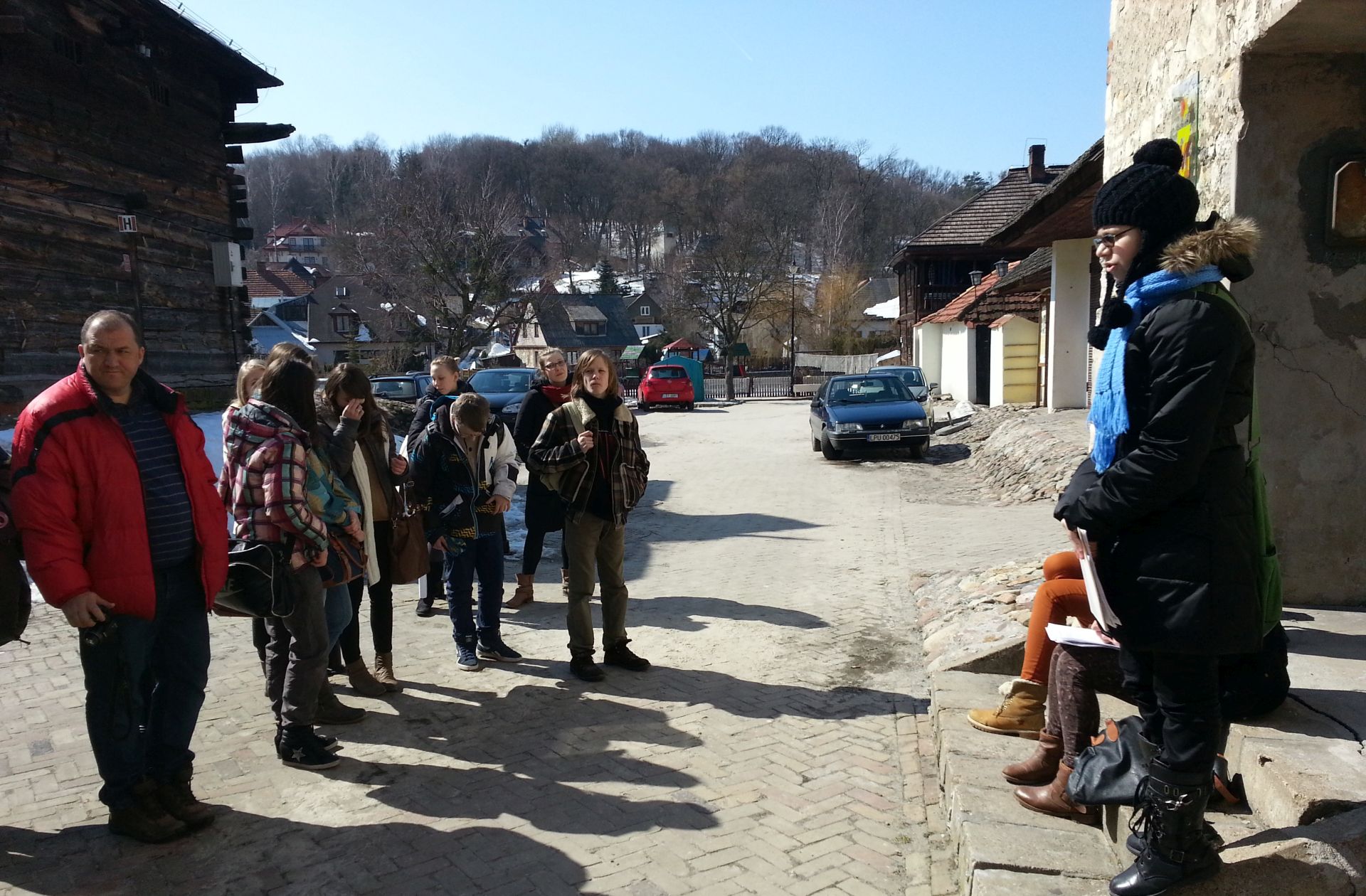 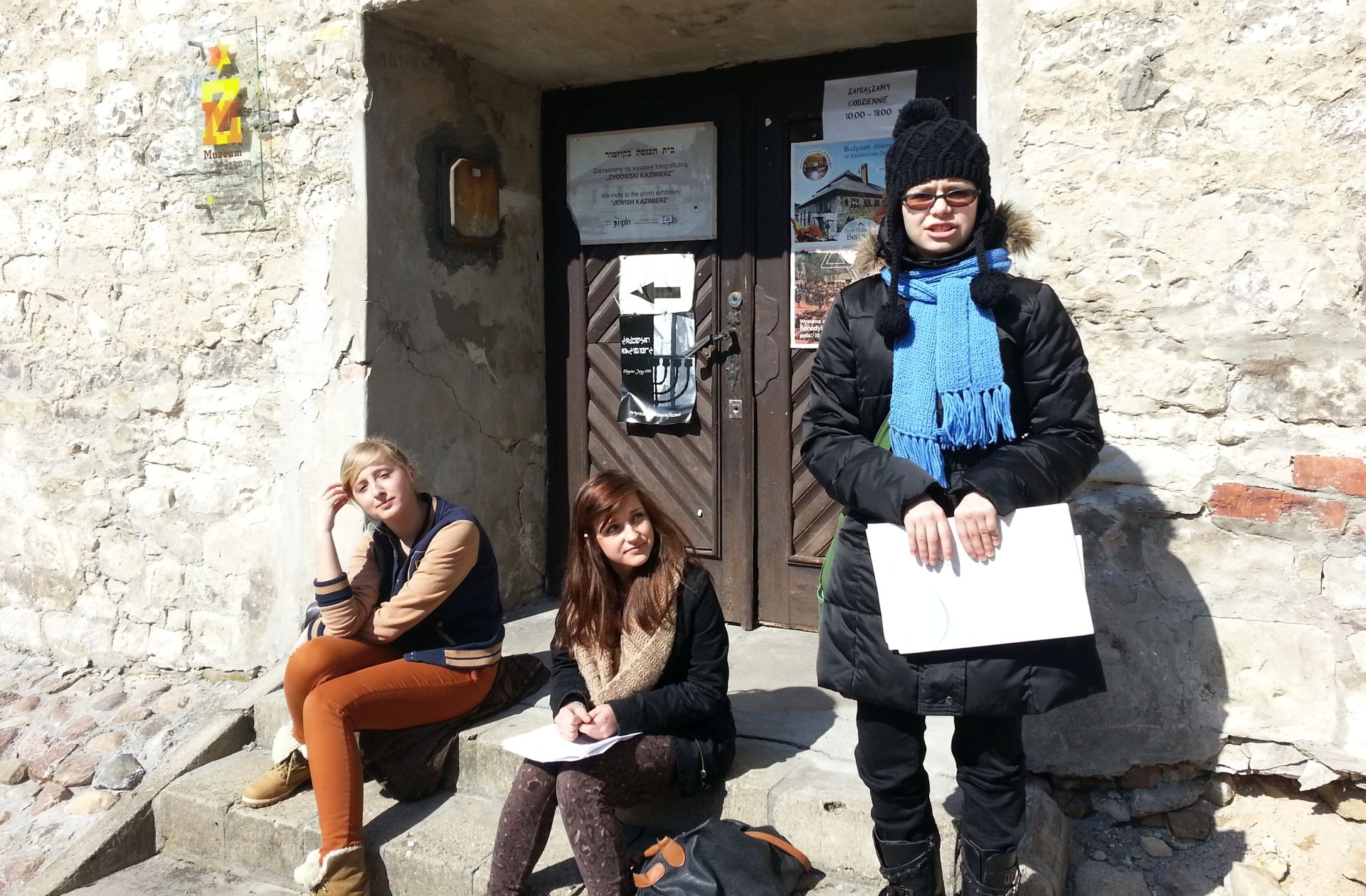 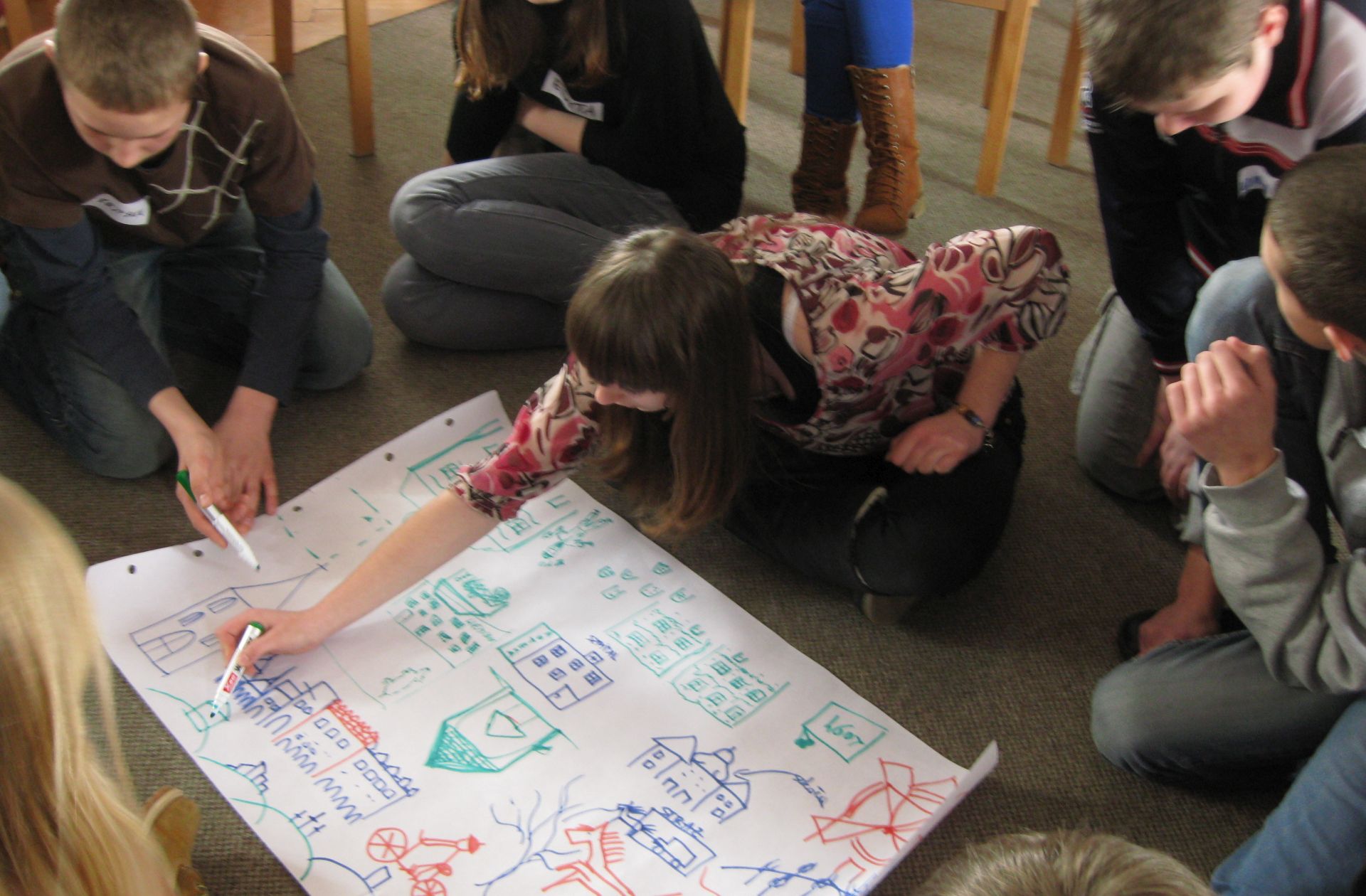 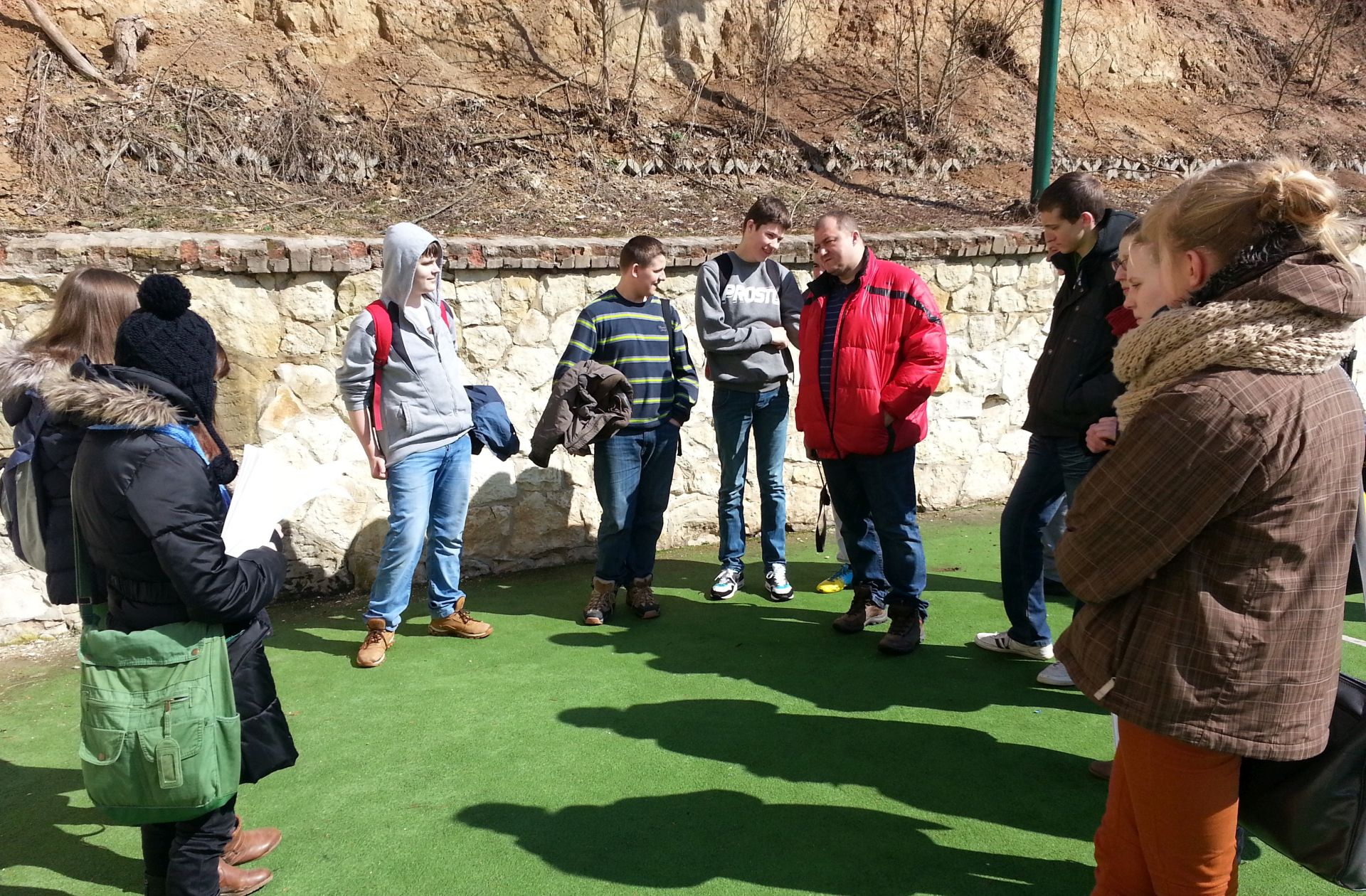 Two films shot in Kazimierz and its surroundings gained popularity among Jews worldwide: “The Dybbuk” and “Jidł mitn fidł”. Each new piece of information served as motivation for work on students’ final project – a walking tour through historic Jewish Kazimierz, but also a tour of present-day Jewish presence in the town. Students scoured the libraries for information and conducted a number of interviews with the town’s senior residents. The local media were informed about the walking tour, posters advertising the event were hung around town. As a result, many people came to participate in the tour, among them: the town’s residents, members of the local council, local journalists and even tourists.
Students led the group first to the new Jewish cemetery’ monument which was build from returned headstones, and then to a school soccer field, as this was the location of the original cemetery.

Students were appalled by the controversial use of the site, with the old graveyard of the local Jewish community being now the yard of the junior high, used to play a ball. The group also visited the site of kosher meat market, the site of the former mikveh and the synagogue. They explained the specific character of the architecture in the Jewish district and elaborated on the meaning of more difficult terms connected to Jewish culture. One female student told the group about rabbi Taub, who not only composed many klezmer standards but was also a member of the local orchestra. Thus, klezmer music was played in the background and accompanied participants throughout the tour.

I liked the workshops, they changed my attitude towards Jews, I also learned about things I was completely unaware of. I think we all learned a lot through these meetings.

These workshops were extremely interesting. (…) We learned about the calendar, holidays, music, played fun games and held interesting conversations. Thanks to our two educators we created quite an interesting walking tour of Jewish sites in Kazimierz.

The walking tour was great, I also liked the different games and activities as well as watching the film. Through these workshops I learned many interesting things about Jews.