First Jews arrived in the lands of the Teutonic Knights as early as the 13th century. Rastenburg, as Kętrzyn was then called, was housed a Teutonic Castle that still stands in the town. However, first records on Kętrzyn’s Jews only date back to the 19th century and the first synagogue was built in the town in 1853. This is no surprise, considering the numbers of the local Kehilla – at its peak, there were around 100 Jews living in the town. Despite its small size, the community had a private school run by Michael Aschermann and a Jewish merchant called Jacobi owned an impressive department store – “Bleyle” on ul.Królewiecka. Local Jewish community members included doctors, factory owners and town councilors. To this day, buildings harking us back to prewar splendor dot Kętrzyn’s landscape – the building of the synagogue, sold in 1914 to the Baptist church and tenement houses that even in the 1930s still belonged to Jewish merchants. As the first School of Dialogue workshops corroborated, knowledge about these buildings’ past is not widespread among local residents.

This was to change as of April 2017, all thanks to high school students at Maria Curie-Skłodowska School Complex in Kętrzyn. From the start of School of Dialogue workshops, they were eager to talk about Jewish culture in the context of their hometown. They could discuss with Forum’s educators Jewish history and tradition not only in the context of Poland, but also the specifics relating to Jews inhabiting Eastern Prussia. The workshops presented an opportunity to get acquainted with the previously unknown history of their local homeland, but also to reflect on the present and the memory of times gone by.

The creativity of Kętrzyn’s students shone through their work on their final project. They decided to combine their ideas and to organize a walking tour through Jewish Kętrzyn that would end at a photo exhibition in Czerwony Tulipan (“Red Tulip”) regional cultural center. The tour route led through 17 different sites connected to local Jews, including the area of the former Neuer Markt (New Market Square), prewar Königsbergerstrasse (present-day ul. Sikorskiego), which was once filled with Jewish emporiums, buildings that before 1939 housed Jewish shops and residents – to this day, one of them still bears the engraved name of its owners, “Beer”. At each of the stops, students told tour participants about particular families that had lived or worked in the given building, which created a sense of neighborly “camaraderie” and ties with prewar co-inhabitants, whose names were now known. The tour ended with a visit to the site of the former Jewish cemetery (which today is forgotten and serves as a bus terminus) and next to the surviving building of the old synagogue at Zjazdowa 9, which is now used by the Pentecostal community.

After seeing all the sites, guests were given the opportunity to consolidate their knowledge through joining in an exhibition of archival photographs connected to the life and activity of Rastenburg’s Jewish community. Refreshments in the form of Jewish food such as dates in honey, matzoh, challah bread and kosher cakes awaited viewers of the exhibition. On display were photographs used in the course of the tour along with names of Jewish families connected to particular sites. Additionally, the audience was invited to watch a film about Jewish identity and religion inside the old synagogue building. Furthermore, each tour participant received a folder with questions and the tour’s itinerary. 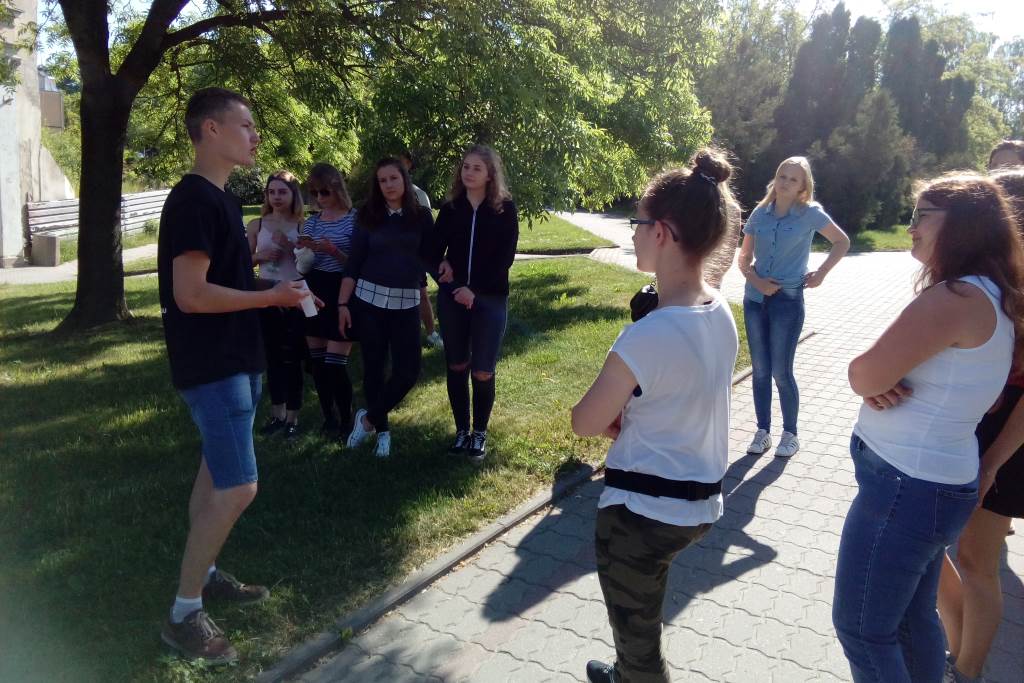 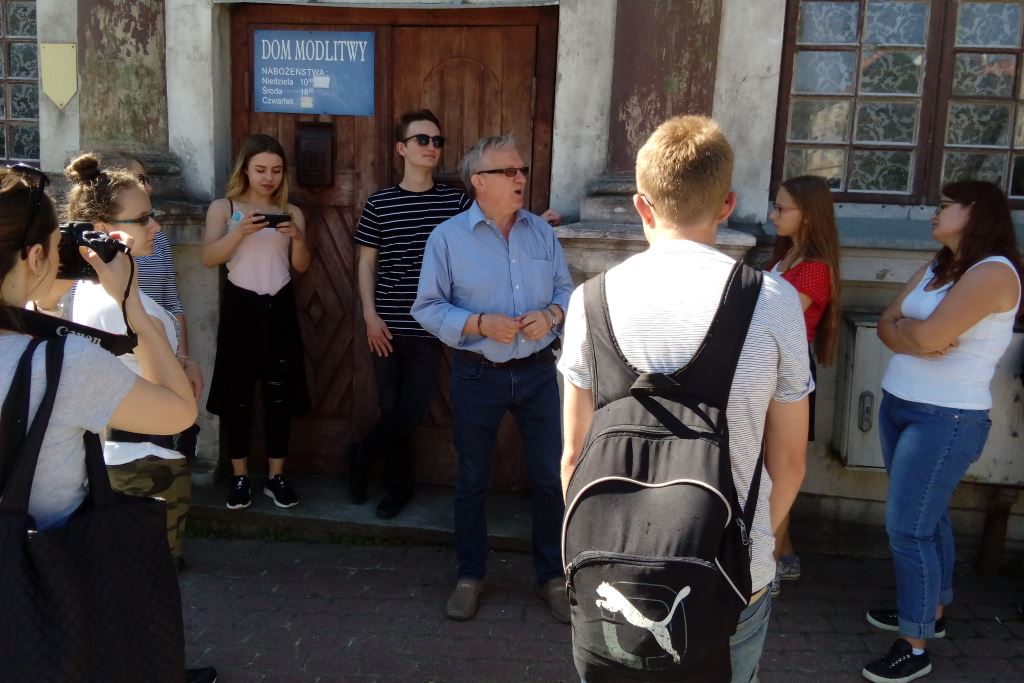 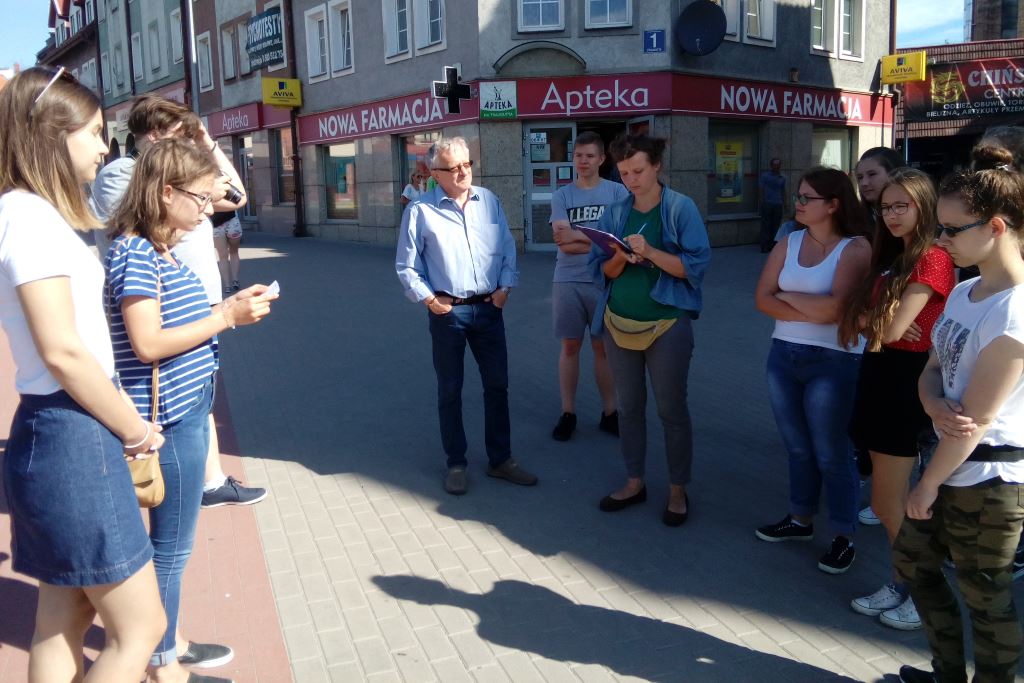 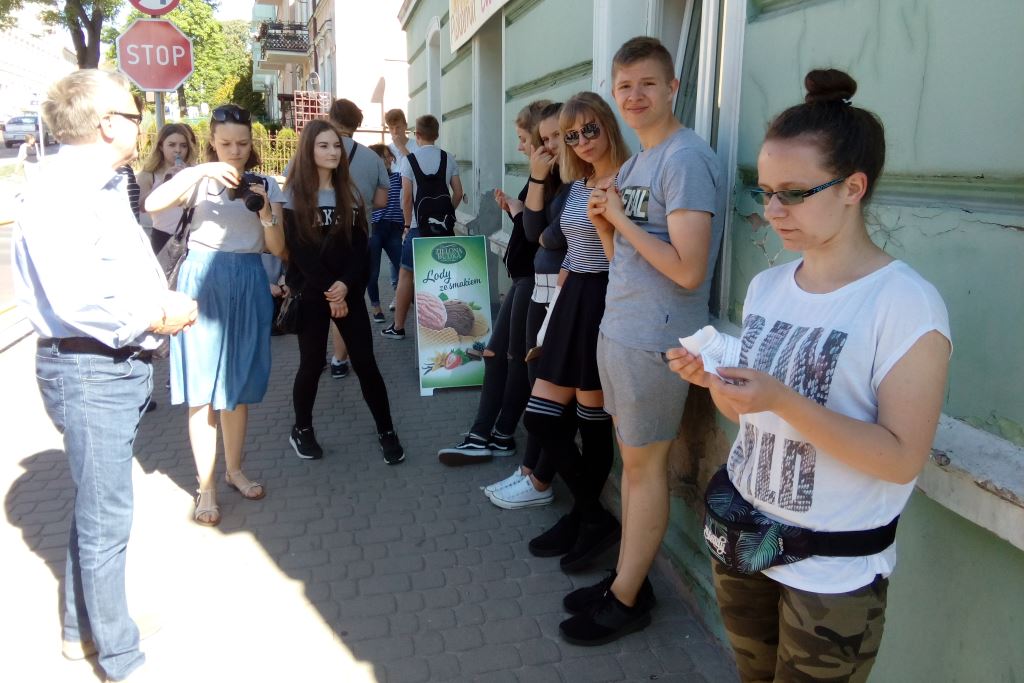 The event proved to be a success not only among other school students, but also a wider public: audience included adults, families with children, teachers, tourists and Kętrzyn district head.

Interestingly enough, School of Dialogue inspired students to reach out to Mr.Frank Lothar-Krawolitzki, Rastenburg’s former resident, who currently lives in Germany. With his support, the students came up with an idea to place a commemorative stone for Kętrzyn’s Jewish residents. Through Mr.Krawolitzki, students obtained contacts to other former Rastenburg residents that also remember local Jews.

Kętrzyn’s high school students are not stopping here. The current student initiative is an information plaque that would present sites important for the history of the town’s Jewish community. Soon after, students were hoping to organize their tour for Kętrzyn’s prewar residents.

From the upcoming school year, the exhibition on Jewish Rastenburg is to become part of their school’s calendar for good.

Undoubtedly, School of Dialogue experience was important for Kętrzyn’s students on a number of levels – that of knowledge about their hometown; that of empowerment to shape their reality and opening up to new concepts and reflections. Perhaps it will be best to allow one of the participants to speak her mind: “I did not think that I would find Jewish history and culture interesting, since I’m not even interested in my own history and culture. But with each session and individual story, I became interested in learning about the history of my ancestors. All because of these people I did not know. I’m an indifferent type, too preoccupied with myself to care for strangers. But still… School of Dialogue slightly altered my perception of the world, other people, history and religion. I don’t know the history of my ancestors’, yet I became interested in Jewish history. I think it’s time to stop thinking only about myself.”