For students from Marcin Stępień High School in Kock, the only site related to Polish-Jewish history in their town that they had known of was the so called ‘Rabinówka’, a distinctive house where the rabbis of Kock used to live. During the series of four School of Dialogue workshops students had the opportunity to explore the richness of Jewish heritage in their town. They learned that the Jews settled in Kock in the 17th
century and by the end of the 19th century constituted the majority of the population. It would be hard to remove them from the town’s history, but apparently it is much easier to simply forget

In Kock, a town destroyed by war and epidemics, the prewar Jewish population numbered 1,529 inhabitants, or 40% of the general population. Jews ran local bakeries, fabric dyeing shops, oil mills and slaughterhouses. They owned some of the local shops and workshops and traded wood and grains. They also had their own parties and organizations. Jews were politically active and their voices were heard. There was the Zionist Bnei Zion, the orthodox Agudath Israel, and the Zionist-Orthodox Mizrachi. There were Jewish town council members and Kock political activists. Schools included a cheder, Talmud Tora, Beit Yaakov and a yeshiva. There was also Icchok Lejb Perec Library, Jewish Amateur Artists Club and Jewish Cultural Associations. Parties and lectures would be organized.

After the outbreak of the war in 1939 Jewish residents from surrounding towns and villages, including Lubartów and Firlej, were resettled to Kock ghetto that was created in late 1940 around the former Żydowska Street [Jewish street]. More and more people arrived; space was lacking, but hunger and diseases were rampant. In that same year the first executions were held: in January and in June. In August 1942 around 100 families were deported to Treblinka. Another 1,700 people were sent there the following month. In October 1942, a few hundred Jews were resettled to the ghetto in Łuków. Those who stayed in Kock were forced to search and clean whatever was left of Kock Jews. In early November 1942, liquidation of Kock ghetto began. Some of the residents were deported to Łuków and then to Treblinka. Others were left in the lumber mill in Poizdów, in a labor camp. The Jewish cemetery was destroyed, while other Jewish sites were torn down.

Fewer than 30 Jews survived the war. Rywka Goldfinger and Icek Zakalil were saved by Apolonia Machczyńska, a woman immortalized in a short story by Hanna Krall who was later shot by the Germans in her father’s home. Jews were also hidden by the Górczyński family and by Mr. Kaznecki from Wola Skromonowska nearby Kock. 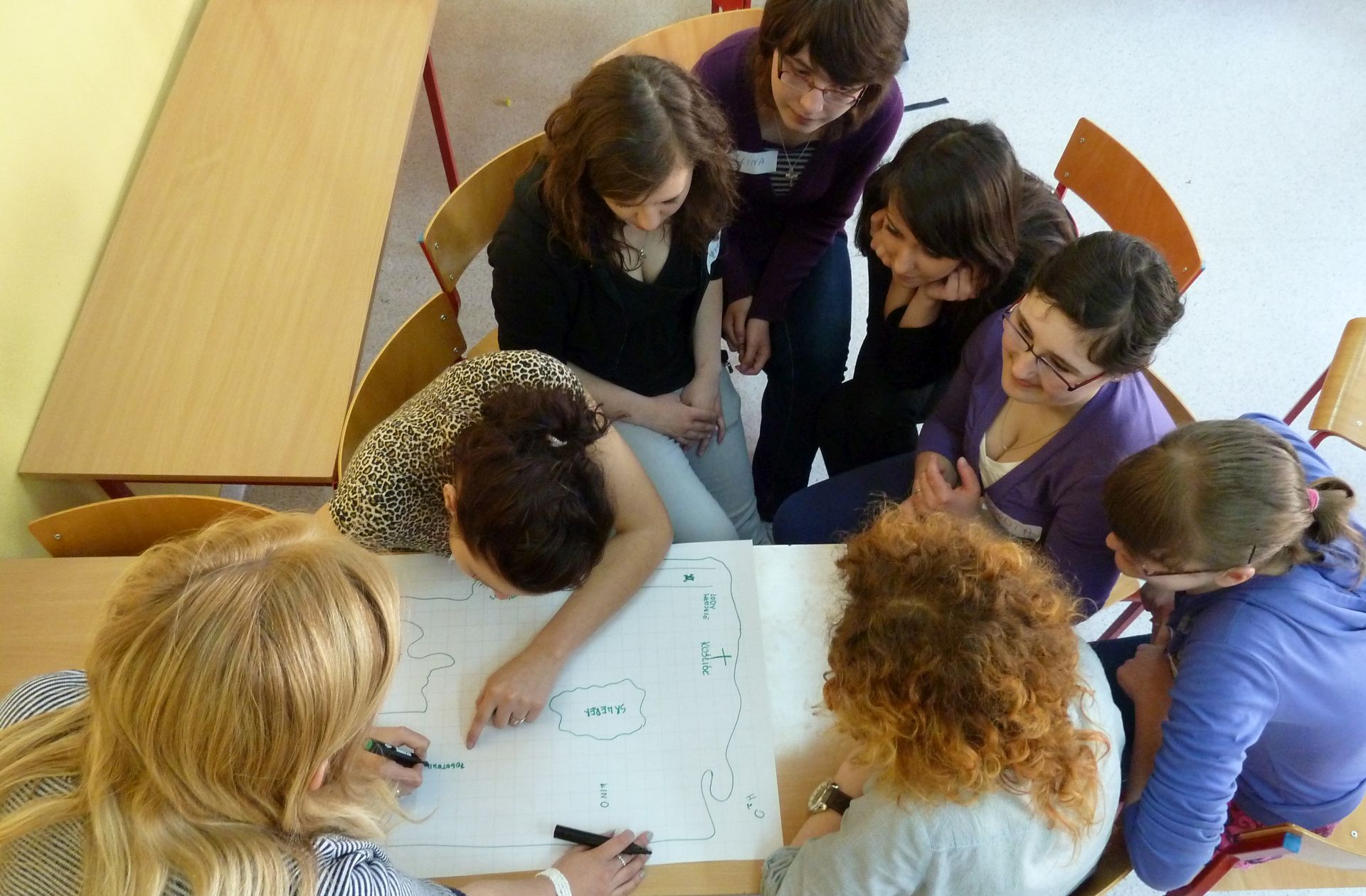 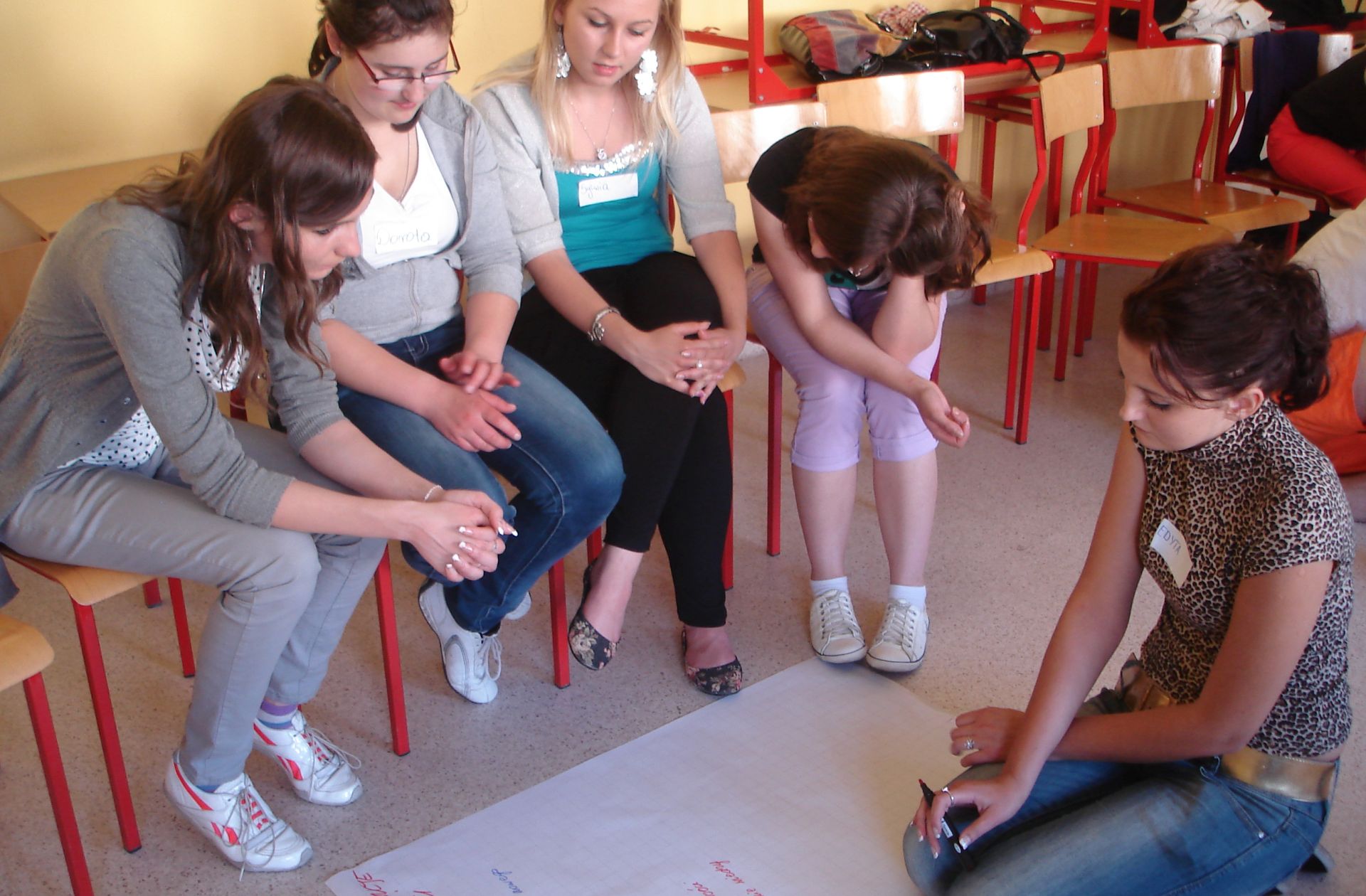 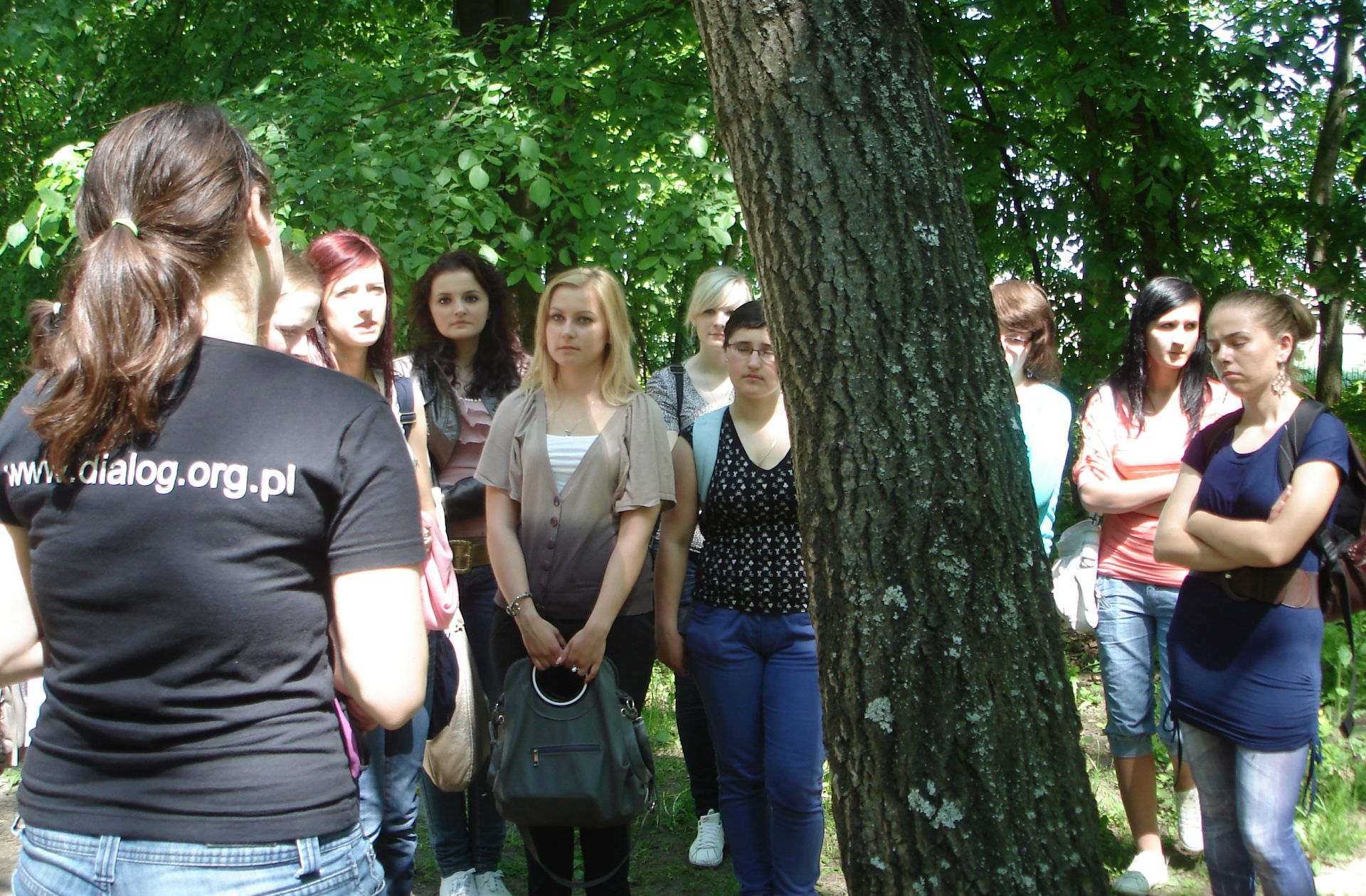 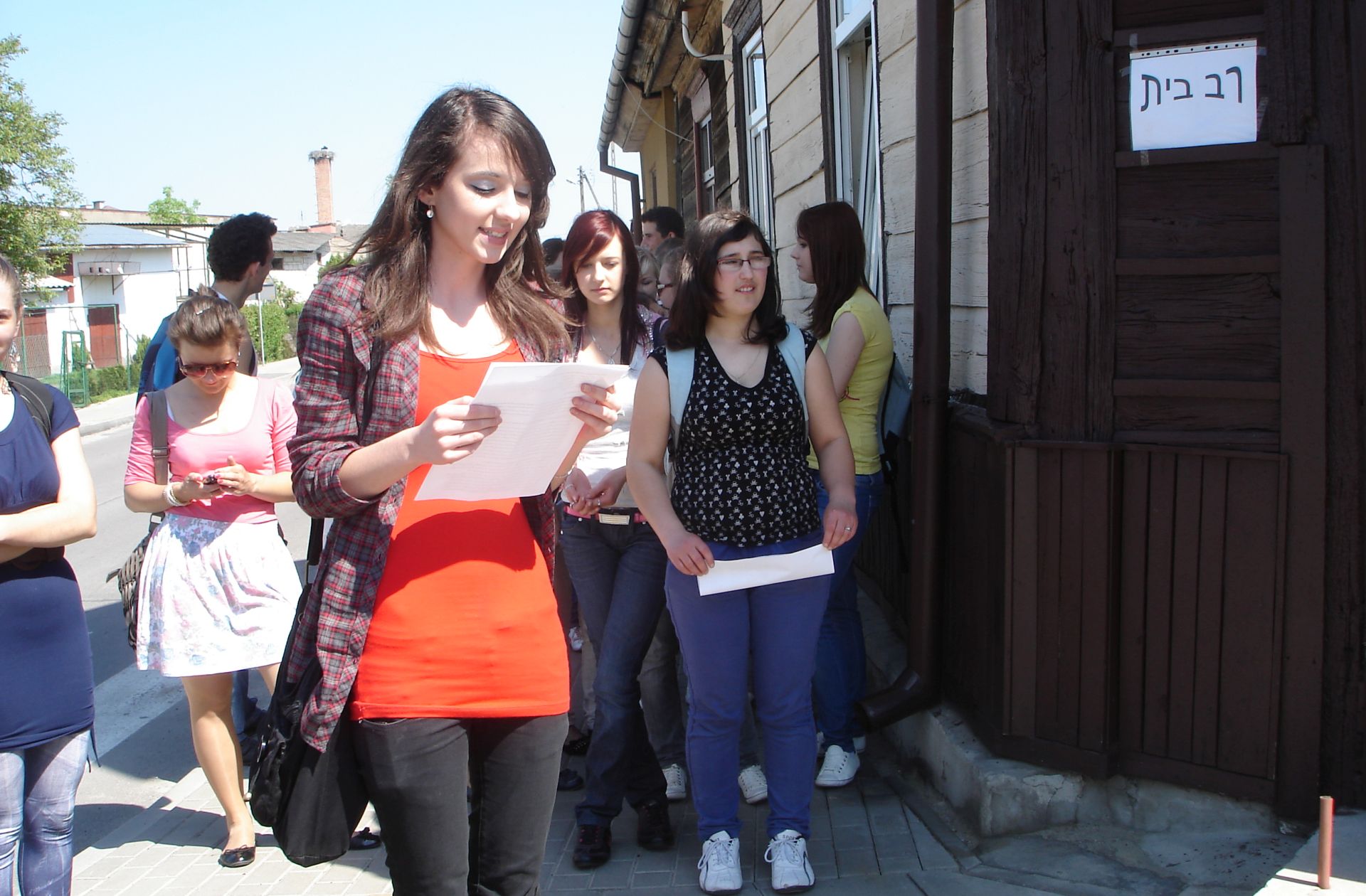 Sometimes Jews were saved, sometimes – murdered. Those who survived the war, survived the ghetto and the camps were murdered because they attempted to recover their cutlery. People like Chai Liss, among others.

Between April 27 and May 21, 2011 Anna Geller and Paulina Sobieszuk led four-day School of Dialogue workshops in a junior high school in Kock. Over these days over the course of almost 20 hours students obtained new knowledge and built on the information they already had about the Jewish history in Kock, Jewish culture and religion. They engaged in various activities and eagerly participated in the sessions. While preparing the final tour for town residents, students read books and researched information online. They asked their grandparents about the location of the synagogue and attempted to place various important sites.

It is hard to find any traces of Jewish Kock – nothing is left of the synagogue which once stood at what was then Radzyńska Street, at the present-day intersection of Wojska Polskiego, Piłsudskiego and Sawickiej streets. The building was richly decorated inside and had around 300 visitors every day, it is said. All that is known about the mikveh, Morgenstern’s Beit midrash and that of Berek is that they existed. No one knows where the kosher slaughterhouse used to stand, no one knows what prewar life looked like and how things were. However, the rabbi’s house where rabbi Morgenstern spent the final 20 years of his life stll stands at the intersection of Polna and Wojska Polskiego, right across from the fire department. A log house decorated with symbolic ornaments in which the famous tzaddik was gradually overcome by old age.

The Jewish cemetery is located outside the town. A long dusty dirt road leads up to it. From the main square you need to walk down Sawicka Street and turn right at the roadside chapel. There is a fence and a gate you open with keys you can obtain from Mr. Stasiak, who lives next door. During the war the cemetery was devastated, and the headstones were used to pave streets and roads. After the war the matzevot were stolen and used as grindstones. There were attempts to farm over cemetery lands, the area was planted over with poplar trees. It is interesting to wonder whether those who planted the trees were aware that the poplar is often considered a symbol of mourning. Now only a few dozen headstones remain. Some have been found and returned to the cemetery. They lie propped against the trees, sad-looking grindstones. It is unclear where their graves are and where the bodies of German executions had been buried.

On the main town’s square students recalled the interesting biography of Berek Joselewicz, the famous Polish-Jewish colonel who was killed in the battle of Kock in 1809 and is buried near the town. The group visited a building that served as a school where Christian and Jewish students learned together before World War II.

They hanged a few plaques with information in Hebrew about what used to stand here and what used to be located there. For a brief moment Hebrew letters reminded about those who lived here, helped to develop the town and had perished only 75 years ago.

School of Dialogue program in Kock was made possible by the support from  TRISHA and FRED MARGULIES.