School of Dialogue at Jan Kochanowski Junior High School No 5

Curious students talk amongst themselves in groups. Someone has got them out of the everyday school routine and rigid school timetable. They are now at the former Jewish cemetery. When asked whether they know anything about Jews, they answer directly: “Nothing, completely nothing, null.” The location-based game begins that aims to change the situation. The letter opening the game states: “Do you think that anyone still remembers Jews from Konin? Is there anything left from their centuries-long presence in the town? What was their everyday life and how they celebrated it? What did they do and how did they spend their free time? How did they influence the sentiment of a small pre-war town? Now, just follow their footsteps and try to see through their eyes. Discover places which were important to them, and learn.”

And off they go. First to the building of the Jewish co-educational junior high school where Leopold Infeld, a famous physicist who co-worked with Albert Einstein, was the school’s principal. “When a secular school ended in the afternoon, non-Jewish children and Jewish girls were off school until the end of the day. But Jewish boys had to go to cheder and pore over Hebrew books,” they explain. And so the game participants are also invited to take a Hebrew class. In order to complete the task, they need to write the last name of the famous physicist in the Hebrew alphabet. “During the interwar period, a surprising change emerged in the world of the Konin cheder. A purely male stronghold opened itself to girls. When a rabbi taught at one table, at the other table his wife taught girls.” The task is for both boys as for girls from junior high. They are all in a rush to finish and get to the next stop.

The next task raises a lot of emotions as one needs some courage to approach a stranger and ask about the plaque at Wolności Square, put up in the memory of the victims of the public execution from 1939, a Pole and a Jew. “We had to ask town residents whether they know anything about Jews murdered in Konin. They reacted in different manners. There were those who talked to us, but some were rather distant,” students said later.

Next stop, next puzzle to be solved: “This is where the books were kept. Throw a stone in the direction of the Church of Saint Bartholomew.” Long ago, the Konin library was one of the largest Jewish libraries in Poland. Their task here is to complete a text in part damaged. We learn a lot about the Jewish community from it: “The first mentions about Jews from Konin date back to 1397. The Jewish commune already existed in the 17th century. Jewish people settled outside the castle walls (the area of the today’s Zamkowy Square), and created the foundations of the Jewish district. In the 19th century, the number of Jews in Konin grew, in 1883 it accounted 52% of the town’s population (6,553 people in total). After the Great War, Konin lost its importance as it was located at the intersection of Russian and Prussian partition. As a result, the Jewish population started to decrease. In 1919, when Poland regained its independence, Jews constituted 44% of the town’s population, and in 1936 – 20.8% (i.e. 2,235 people). Jewish community was differentiated in terms of wealth, social background but also politics. Despite a decrease in the Jewish population, its significance as a group in economic life of the town was still high. It is worth noting that there were several Jewish charity and religious associations active in the town, and also …” 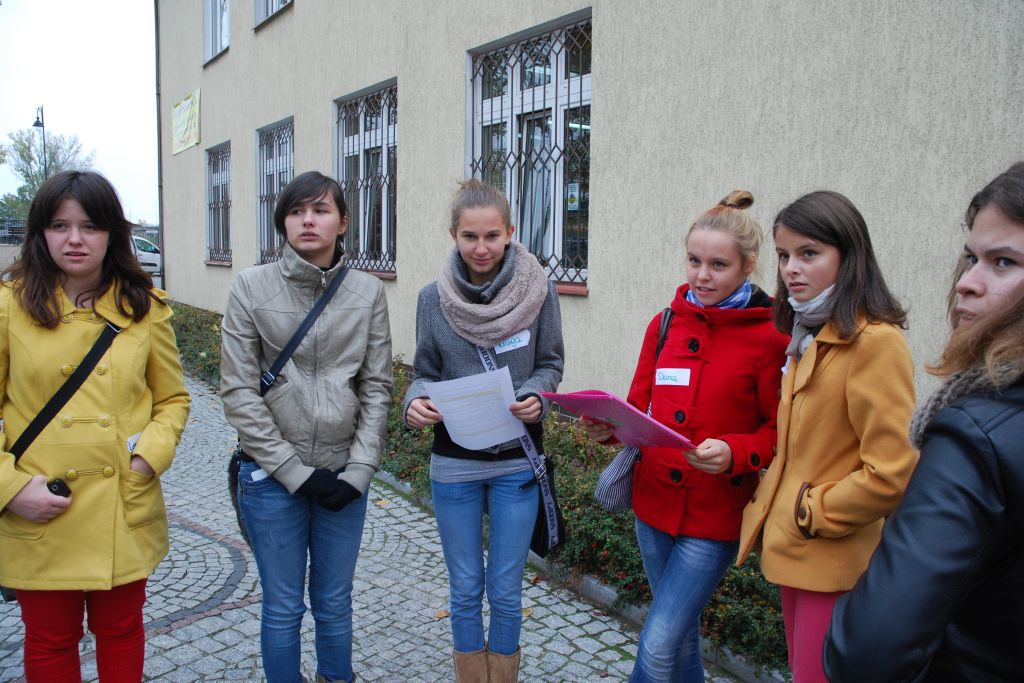 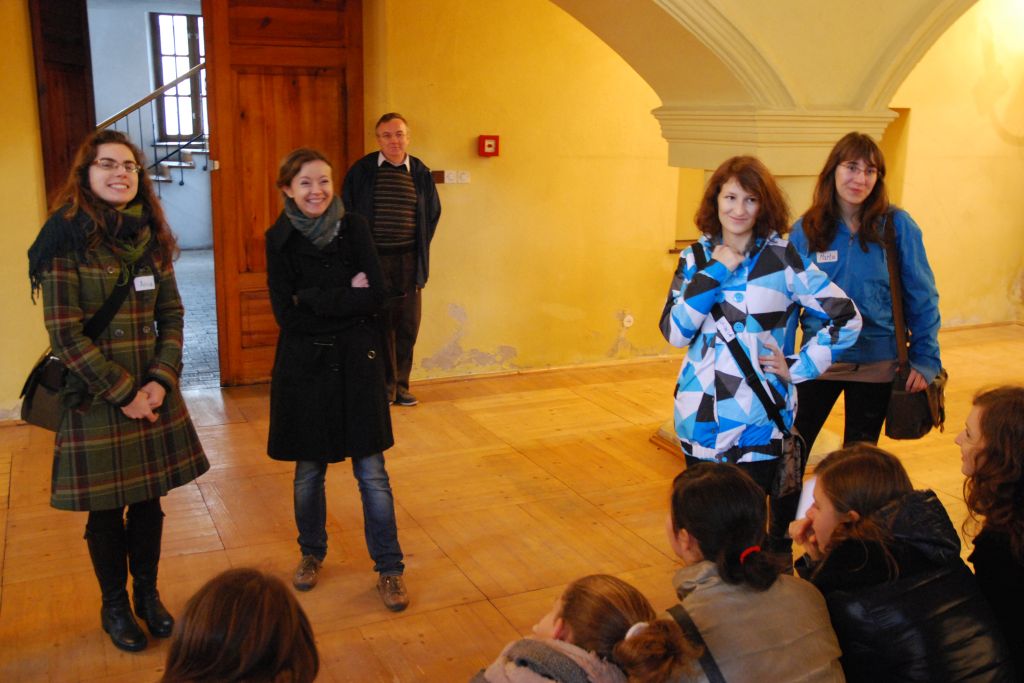 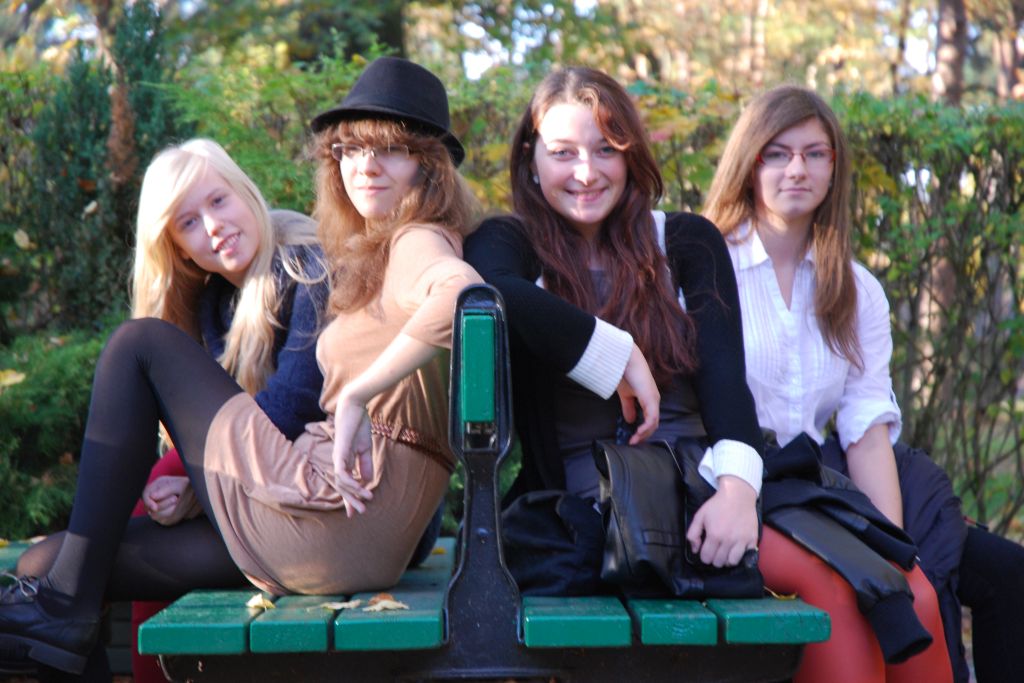 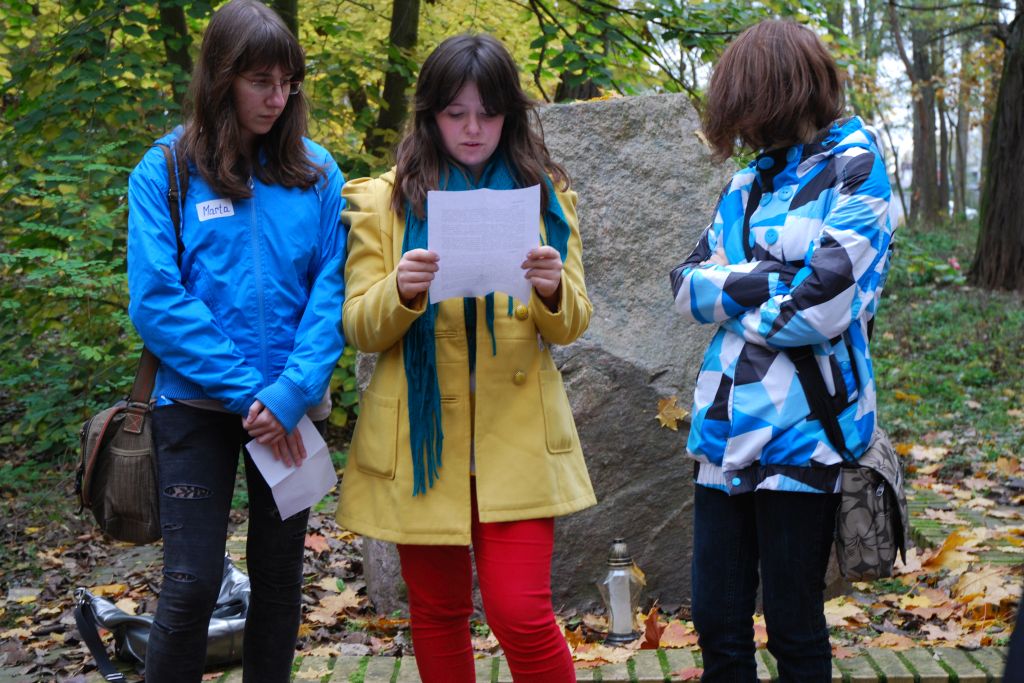 Tepper Markt, being Pottery Market, today Zamkowy Square. Poor houses that resemble country cottages, five-floors buildings with stone elevations, neo-gothic beth midrash. Shop keepers standing at shop entrances, herrings flapping in barrels, carriers with wheel barrows, farmers selling eggs and cheese, a loud sound of the gramophone tube coming from Ryczke’s tailor shop. Jews arguing about Judaism, Zionism, Socialism – this is how junior high students from Konin imagine the pre-war shtetl. Their peers enter this reality by running to the former Kremowa Street, and trying to pass other groups and win the prize. “Natan and Mosze stand in the middle of the Kremowa street and cry as they do not know the streets. Only the game participants can help them out”- but in order to do so, they need to compare the contemporary map of Konin with the pre-war one. What is more, they will be able to see that at the place where mikveh was before, now stands a supermarket, and where the Jewish cemetery was located, there is now an undeveloped green area.

They finally arrive to the finish line. The most impressive and recognizable trace of Jewish life in Konin is the synagogue, the beth midrash and mikveh next to it. The decrypted motto says: “Read stones.” Emotions fall, and now comes a moment to ponder. One can write a letter to a Jew from Konin or put a stone at the place of burial or murder of Jews from Konin. Local authorities also want to participate in the event; at the end, they invited the students for snacks while the organizers award certificates for completing the game, and give diplomas to the winners.

While the game participants were going from one stop to the other and solving tasks, learning about the Jewish history of their town, the organizers, participants in the School of Dialogue program, were filming the entire event. During the breaks, they interviewed town residents, the school’s principal, a teacher, and their peers, asking about their impressions. Another group had collected archival photographs of Konin, and prepared a narration. This is how they made the film “Read stones” which depicts the pre-war Konin in the context of the project.

The events were preceded with workshops led the Forum for Dialogue educators and weeks of preparation. During the workshops, students got very interested by the subject of kosher food. A visit to the synagogue stirred the highest interest among students. “The visit to the synagogue was for me the greatest highlight. It is beautiful. The person who let us in told us in details about what was inside”, Paula recalls. Thanks to the courtesy of Włodzimierz Maciaszek, the current owner of the building, the junior high students had the possibility to discover the history of the synagogue. In their search for information about Jews from Konin, some met with Piotr Rybczyński, head of the Konin Branch of the State Archives in Poznań. Also, when working on the project, students met with Łucja Nowak, Ph.D., a retired director of the Regional Museum in Konin. She showed them a few headstones from the Jewish cemetery in Konin as well as photos of the headstones from outside Konin and scans of cemetery maps.

“History has been a personal interest of mine for a long time. My father passed on this passion to me and I am grateful for that. It was only during the workshops that I realized how little I know about the history of my hometown, despite all I learned from textbooks. The workshops organized by Forum for Dialogue helped me learn Jewish words that I needed for the project. And their interesting form facilitated learning. People are my favorite source of historical knowledge, so I was happy that I could meet the person who takes care of the synagogue in Konin, and the lady who studies the remaining traces of the Jewish community in Wielkopolska region,” said Alina, one of the program participants.“I am happy to have enrolled in the workshops as they truly broadened my knowledge. Today I do not pass these places indifferently, but I stop and think about the life of people who once lived in my town,” added Agata.

The project of junior high school students from Konin wasa warded the first prize at the 2012 School of Dialogue Gala.

History has been a personal interest of mine for a long time. My father passed on this passion to me and I am grateful for that. It was only during the workshops that I realized how little I know about the history of my hometown, despite all I learned from textbooks.

The workshops organized by Forum for Dialogue helped me learn Jewish words that I needed for the project. And their interesting form facilitated learning. People are my favorite source of historical knowledge, so I was happy that I could meet the person who takes care of the synagogue in Konin, and the lady who studies the remaining traces of the Jewish community in Wielkopolska region.

I am happy to have enrolled in the workshops as they truly broadened my knowledge. Today I do not pass these places indifferently, but I stop and think about the life of people who once lived in my town.

I have to admit that before the workshops my knowledge about Jews was very limited. Today I can say that I know quite a lot.

School of Dialogue program in Konin was made possible by the support from LESLIE and BRUCE LANE.