School of Dialogue at Stefan Żeromski School Complex No 2

Konstancin-Jeziorna – a rich suburban town close to Warsaw of 17 thousand residents. Before World War II, Konstancin and Jeziorna were two independent towns; Jews inhabited mostly the latter. First mentions of Jewish presence in Jeziorna date back to the 19th century. After World War I, the town had over 300 Jewish residents; in 1939, the number had risen to ca.450, which accounted to around 53% of the town’s population. Jews were mostly merchants and craftsmen, but some represented the “intelligentsia” and were doctors and lawyers. A wooden synagogue – the so-called Synagogue on the mud – was built in Jeziorna, while a brick one was erected in the 1930s. Next to the newer synagogue stood a mikveh; its building still stands. In all likelihood, Jews from Konstancin and Jeziorna did not have their own cemetery and thus would be buried in Piaseczno.

During World War II, Germans created a ghetto in Jeziorna between Warszawska, BIelawska, Zgody, and Fabryczna streets and the Jeziorka river.

Little information is available about this ghetto. In 1941, Jews were transported from Jeziorna to the Warsaw ghetto.

An announcement on Polin Museum’s Virtual Shtetl  website states: “Attention: we are looking for any information relevant to the ghetto in Jeziorna.” Then there is also the mysterious case of the Jewish cemetery. There is none in Konstancin Jeziorna and prewar maps make no mention of such cemeteries in the area, yet a surviving excerpt from the Land and Mortgage Register from 1887 marks a plot of land between Chylice and Wierzbno as a “Jewish cemetery” (pol. “kirkut). So there is much to explore. On one of the photos from the workshops, Forum’s educator examines carefully the doorframe of a once-Jewish home at Kozia Street, looking for a mark after the mezuzah. 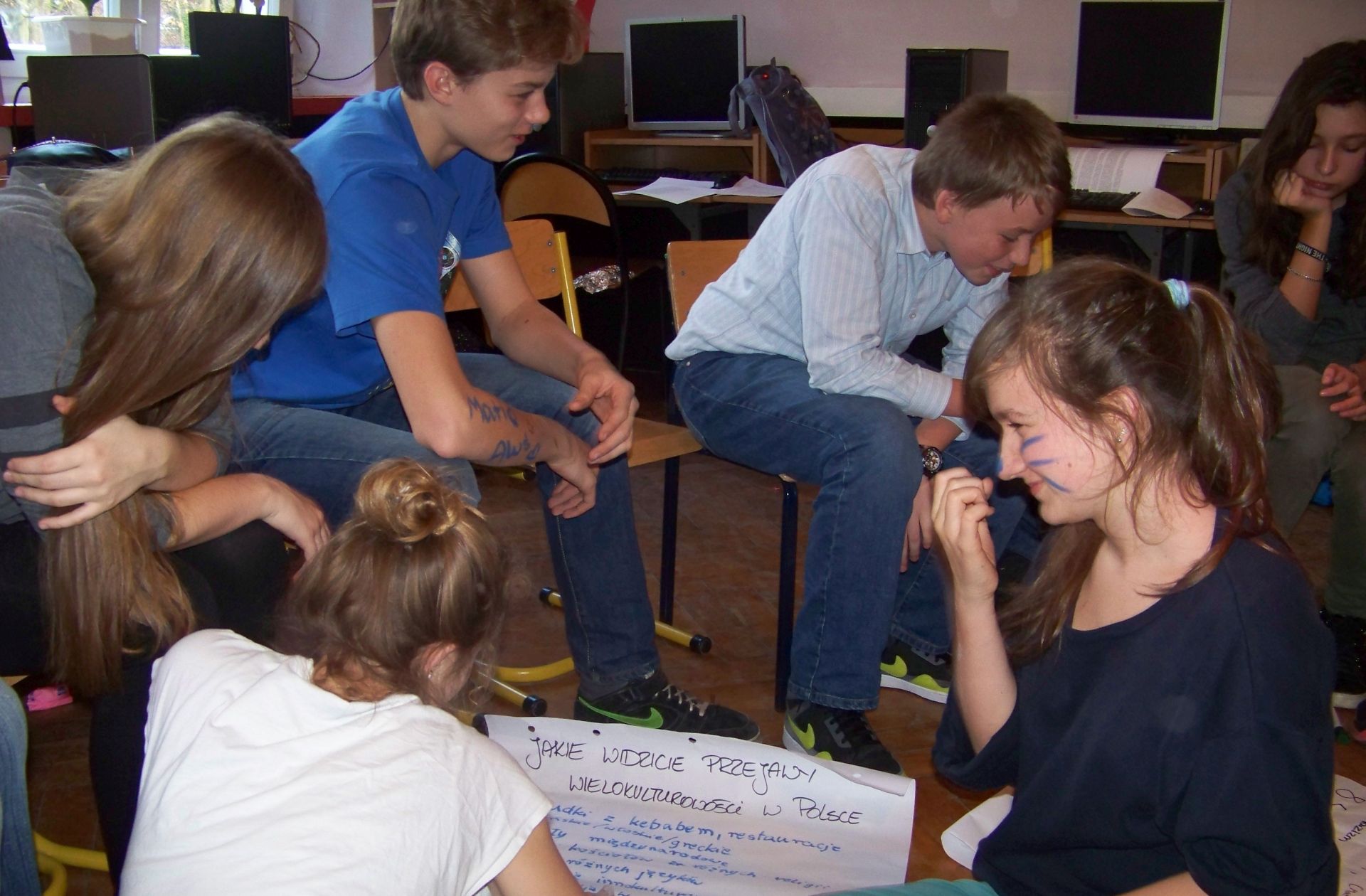 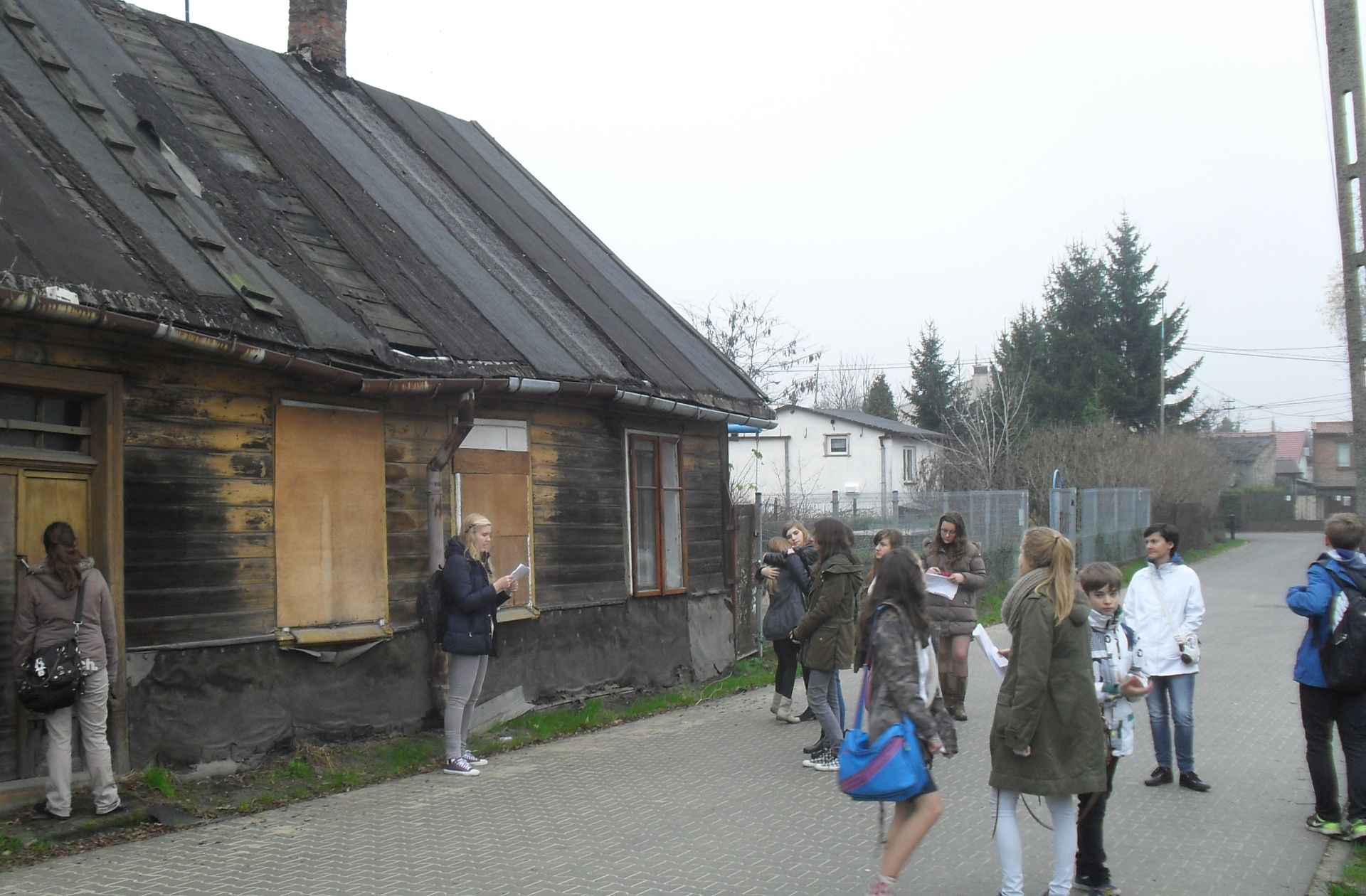 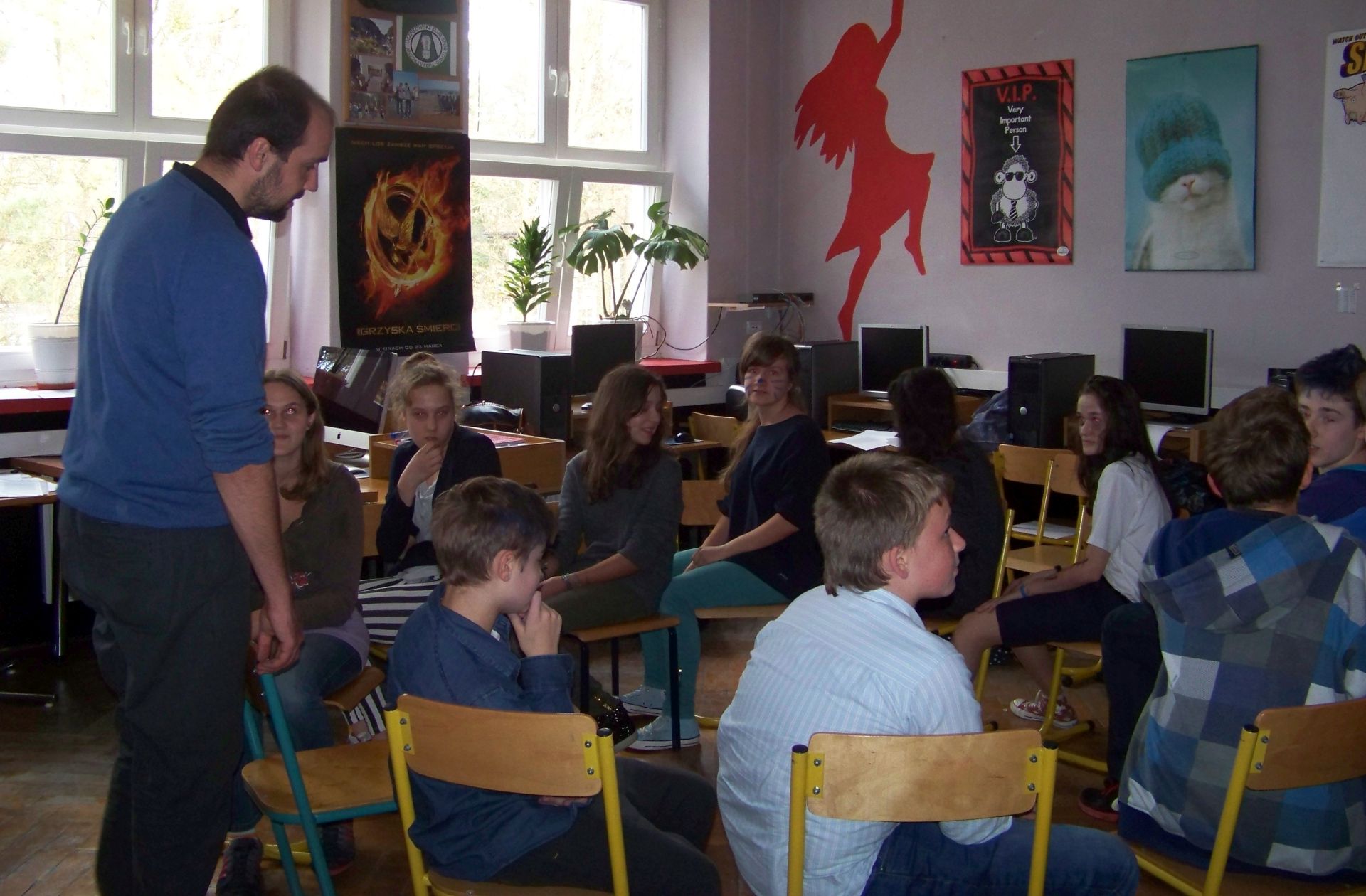 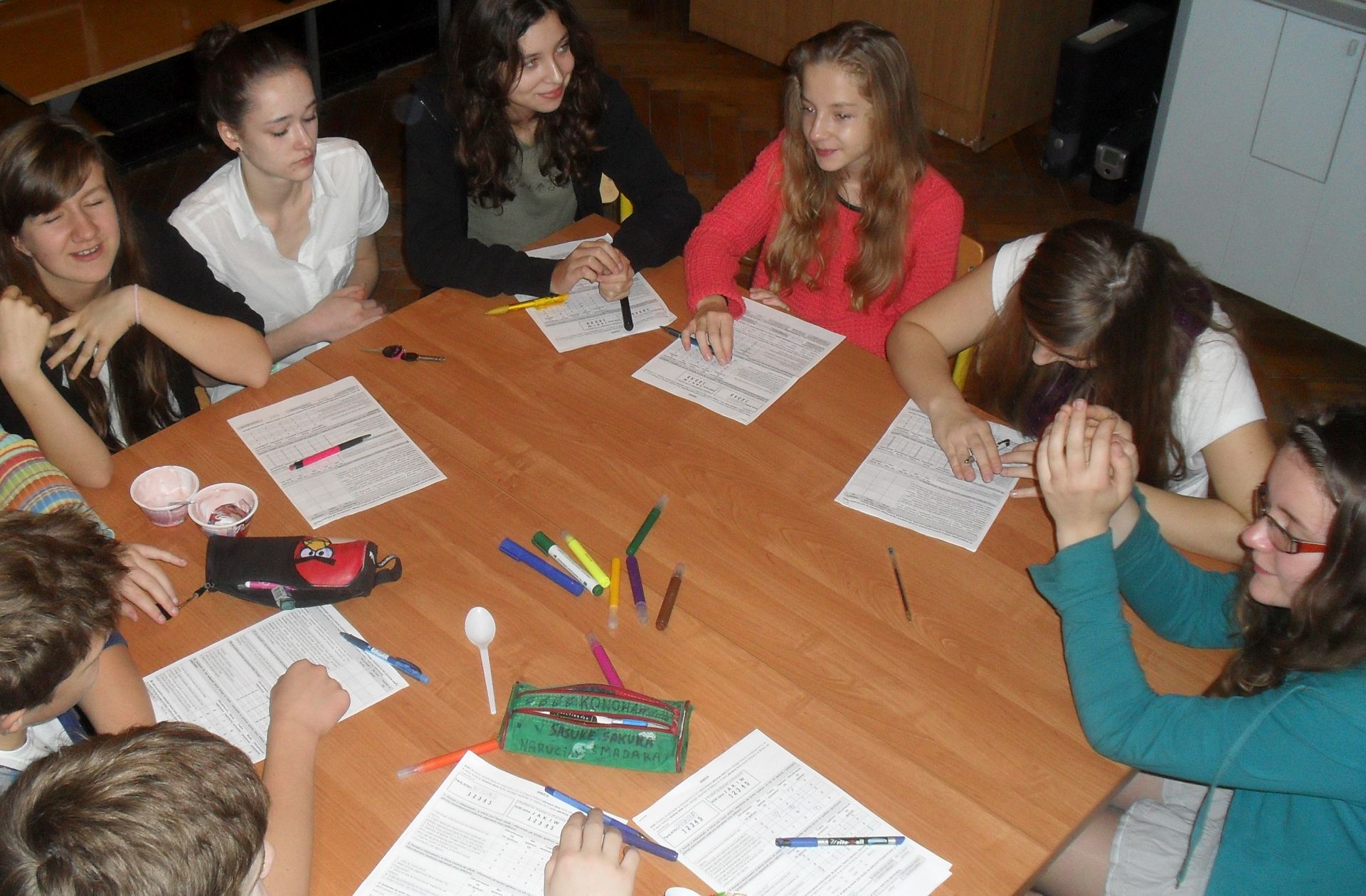 She wants to imbue the junior high school students with “the explorer’s bug”, to have them become local history researchers, local leaders and activists. But to do that, educators must first relay to students the basic information about Judaism and the Holocaust, as there is little knowledge about these topics among the group. The walking tour of their town held in the course of the third workshop makes students ashamed how little they know about it. Things take a different turn after the workshops. School of Dialogue participants want to share the newly gained knowledge with their peers.

A meeting of all third year junior high school students takes the form of a virtual tour. Student guides display a map of the town with all important Jewish-related sites clearly marked out. They show photos of surviving buildings;

talk about slaughterhouses and kosher rules, about the two synagogues in Jeziorna, about Abram Konigstein; they explain some of the Jewish holidays, the role of the mikveh and ritual cleanness. They mention World War II-era occupation, the reality of ghetto life and deportations to Warsaw, when German troops entered the ghetto on a cold night in February 1941, expelled everyone from their homes not allowing to pack anything and forced them onto cars. Students presented the story of Mr.Stanisław Penconek, who was awarded the title of Righteous Among Nations and talked about the Sisters of Charity from Klarysew who hid Jews during World War II. They also imparted information about the aforementioned house of Icek Lichtensztejn at Kozia Street. “I now have more respect for Jews because I learned about their culture and traditions” admitted one of the participants after the workshops.

I now have more respect for Jews. This is because I learned about their culture and traditions. I also gained respect for people of different skin color who practice traditions different from my own.

I’m happy to have participated in School of Dialogue workshops and learned about things I had no clue about. Plus, I now am more tolerant towards others.

School of Dialogue program in Konstancin-Jeziorna was made possible by the support from  CAROL SAIVETZ.