In the crest of Krasnystaw, a town in the Lublin area, one can see two yellow carps against a blue backdrop. The carps look apathetic and seem to be glancing at the viewer with fear in their eyes. It is said that the animals owe the honor of figuring in the town’s crest to the fourth wife of king Władysław Jagiełło, who praised highly the carp in saffron she was served in the village of Szczekarzów (as Krasnystaw used to be called).

Today, Krasnystaw is a town of over 19 thousand residents. In all likelihood, Jews first arrived there in 1548, but Jewish merchants would pass through Krasnystaw already much earlier. First settlers would live around the area of Zakręcie, Zastawie, Grobla and Krakowskie Przedmieście.

Jews would gradually settle in Krasnystaw; in 1921 their numbers were at 20% of the local population and did not change dramatically until the time of World War II. Jews of Krasnystaw were predominantly merchants and craftsmen; some even owned their workshops. The Jewish cemetery was established at the end of the 19th century and in 1917, there were three Jews in the town council. In the interwar period, the community had its own synagogue, mikveh, slaughterhouse, a few cheders and one Bais Yaakov (Jewish school for girls). Jews had their own workshops and stores, photo and typography studios and one hairdresser.

They owned mills and bakeries, there was also a Jewish bookshop. There was also a grain depot and beer bottling plant that had Jewish owners. Bund, Zionists and Aguda all had their supporters in Krasnystaw. Trade unions and a number of associations were active in the town. Up until World War II, the town was bustling with Jewish life, which flourished and blossomed.

The ghetto, which was established in 1940, imprisoned around 2 thousand Jews from the town and surrounding area. Some of its residents were sent to Sobibór death camp via the ghetto in nearby Izbica. A few others ended up in Majdanek; those who stayed in Krasnystaw were deported to Bełżec death camp in October 1942.

The only material testimony to this history in topography of present-day Krasnystaw is the presence of a few buildings connected to the town’s prewar Jewish life: that of the synagogue at number 3 of Czysta Street, which had been restructured many times; and the area of the Jewish cemetery at Rejowiecka Street, right next to a forest known as Borek. A few crumbling headstones still stand at the overgrown graveyard. Unfortunately, there is no fence of memorial plaque marking this site. 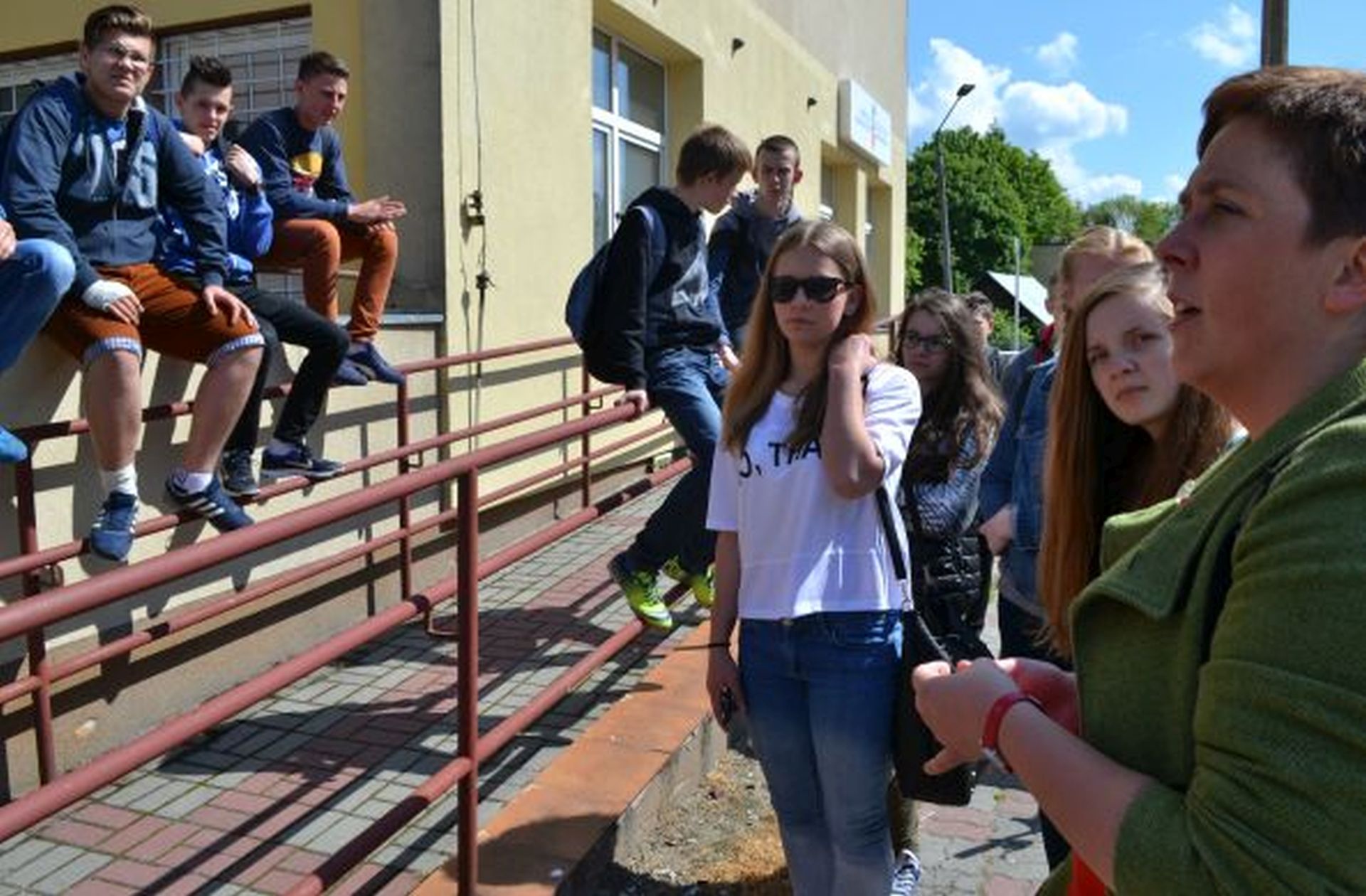 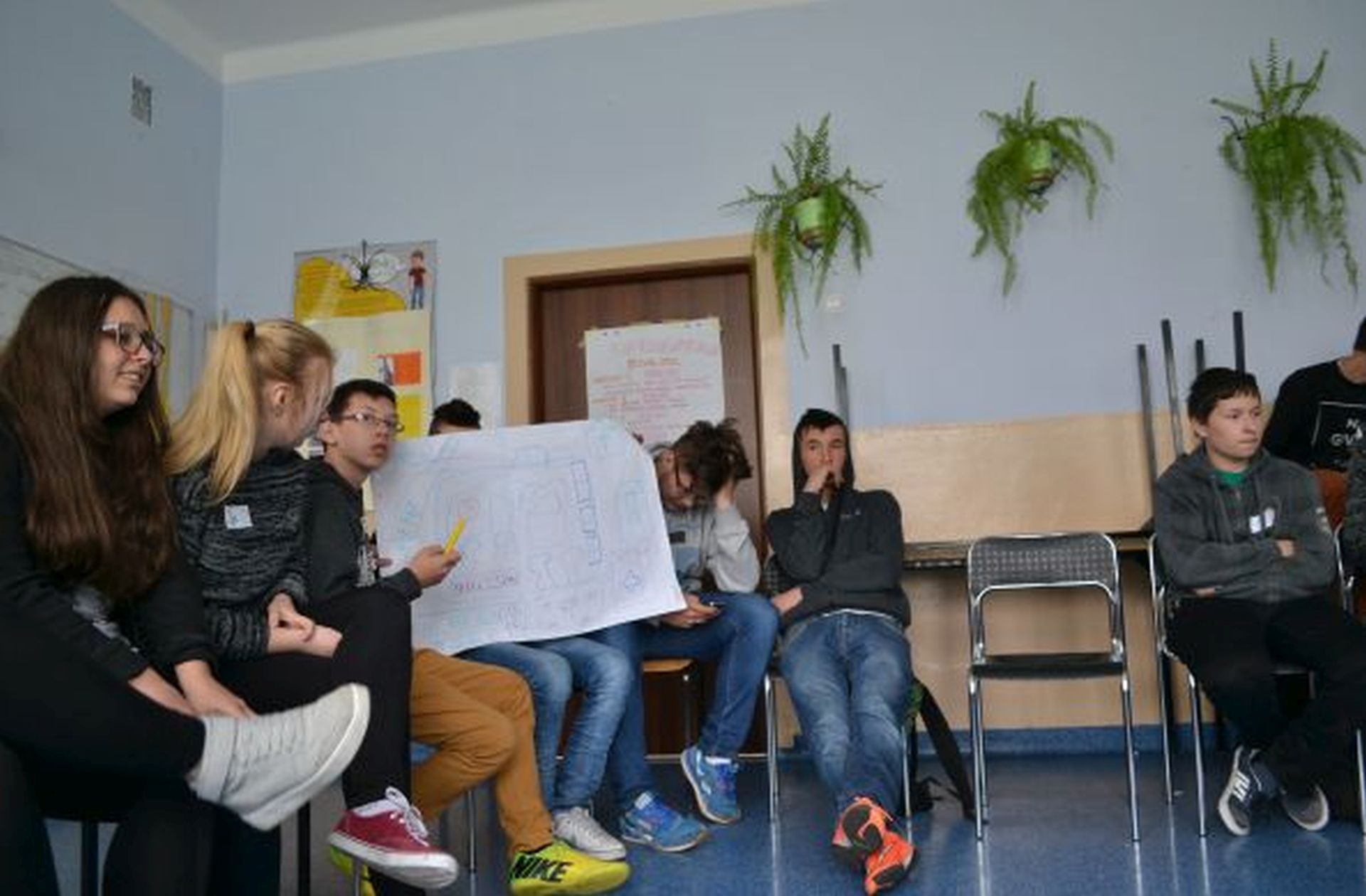 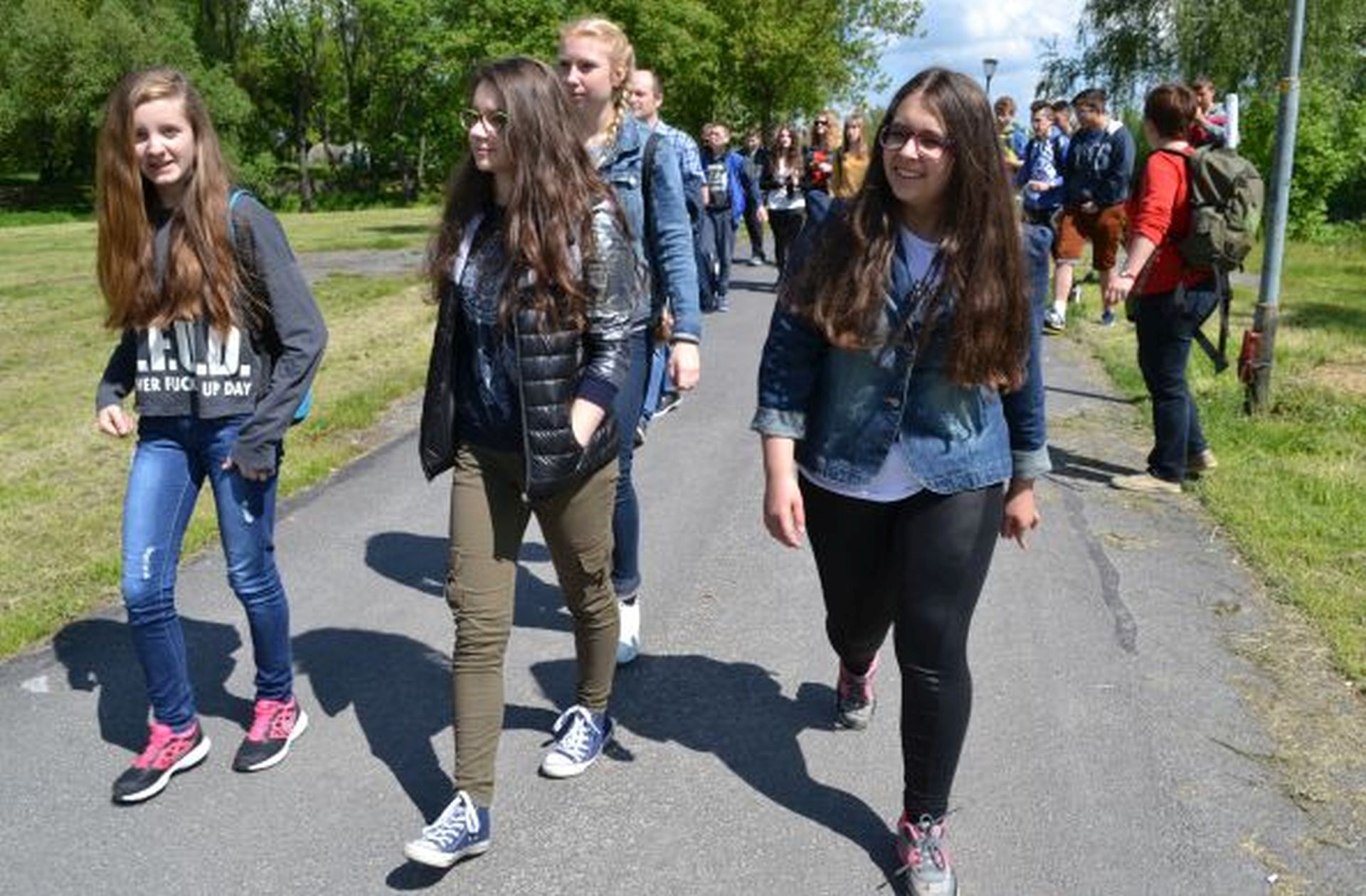 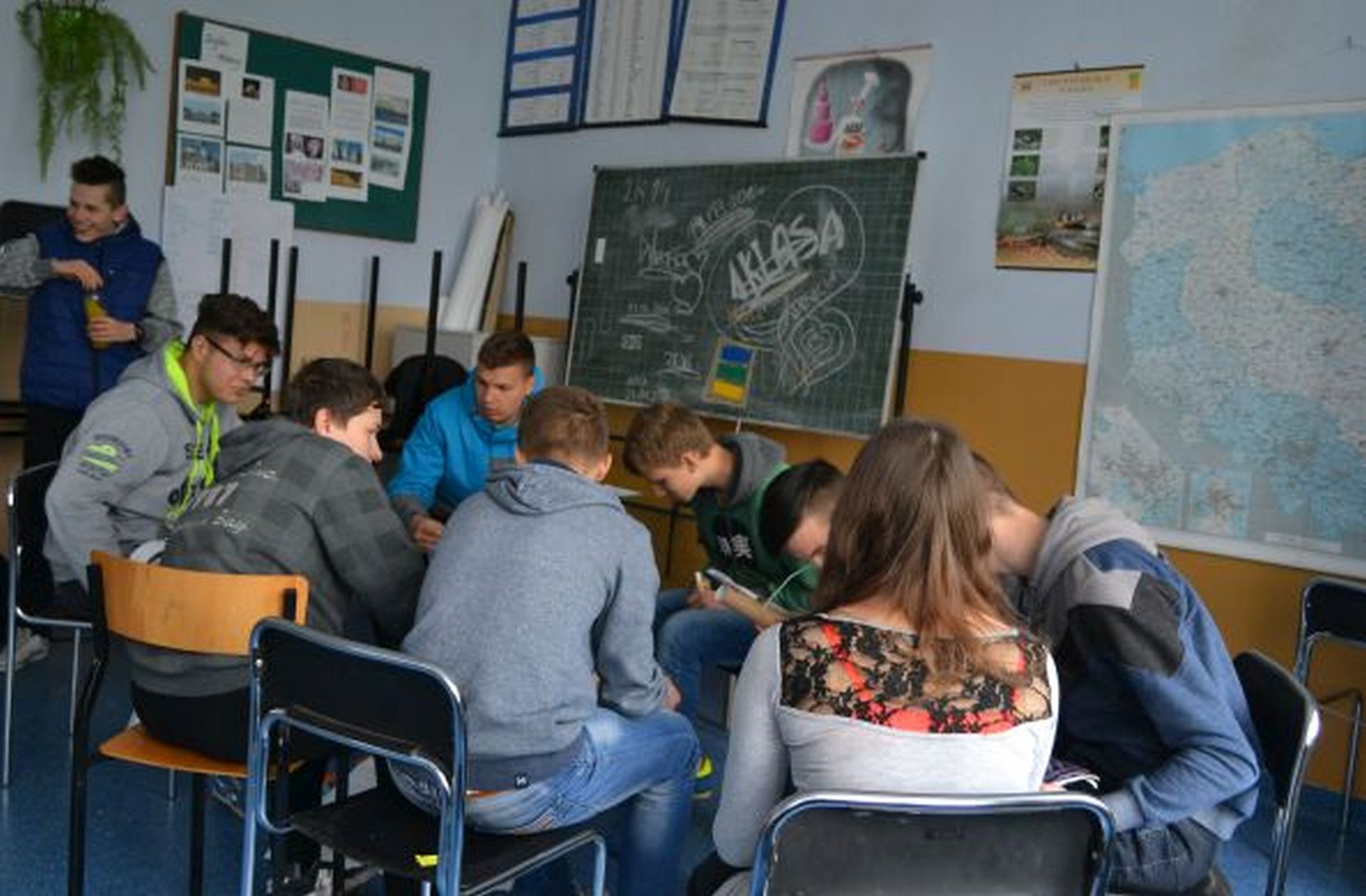 In the course of the spring edition of School of Dialogue, students of the local junior hugh school in Zakręcie along with Forum for Dialogue educators explored the Jewish history of Krasnystaw. They studied old photographs, discussed the bases of Judaism and the different holidays connected to it, the meaning of multiculturalism and stereotypes. Students studied the time of World War II and how it impacted their local Jewish community and the present-day identity of Jews in Israel, the United States and Poland. After a few days of group work, students began to prepare a walking tour of their own design for local elementary school students.

The tour was held in the middle of the week – a Wednesday – on June 8, 2016. The meeting point was pl. 3 Maja, where students provided an overview of prewar Krasnystaw, describing the small tenement houses, shops and the square itself, where Jewish and Christian children played together and how this whole story ultimately ended. From the square, they led their group on a tour of “Jewish Cultural Sites in Krasnystaw”.

Under the Binder family house, students talked about the family, their professions and what happened to them after the war broke out. They also quoted the testimony of the Binders’ daughter Miriam, a Holocaust survivor, and testimonies of Wiesława and Alicja Niewidziajło, whose family hid the Binders during the war.

On Czysta Street, under the building of the former synagogue, students explained what a synagogue is and who is a rabbi. They described the Krasnystaw synagogue as it once looked, how it was built and which original elements can still be seen on the building. They supplemented their story with archival photographs.

On Zamkowa, students pointed out where the rabbi’s house once stood and where Jewish shops used to line the street.

They sketched the biography of the local rabbi, whose name was Naftali Czerwony Kamień and who lived near the synagogue. Students also quoted one of the local residents, who wrote in his memoirs about Krasnystaw’s Jewish shopkeepers.

At Zaułek Nadrzeczny Street, tour organizers talked about the castle and mikveh both standing on the same street. They explained what a mikveh is, who used it and how it looked before the war. At Grobla Street, students showed where the gate of the ghetto would have been and explained what the ghetto was. They recounted the history of Krasnystaw’s closed Jewish district, supplementing it with reminiscences of Jews who were placed there after the war. They explained what happened to Jews of Krasnystaw during the Holocaust.

At Partyzantów Street, students pointed out the former cheder building, explaining immediately what a cheder is, who learned there and how many cheders were in Krasnystaw altogether.

At each stop, the group would be shown photos of the site before World War II or right afterwards. Everything was explained in simple language, so that elementary school students would understand.

For the final part of the walk, students had prepared a game to cement their guests’ knowledge of Jewish and Christian holidays. Can someone spot the differences and the similarities? Tour participants were treated to matzoh and asked about their impressions. At the very end, a poster was created by everyone involved, allowing anyone to sign their name and state what they feel after the tour.

The workshops were very interesting. Thanks to them, I learned that my town is connected to Jewish culture.

I liked all our sessions, but my favorite was the walking tour around Krasnystaw.

School of Dialogue program in Krasnystaw was made possible by the support from  KAREN SHAPIRO.