The Jewish district in Łask, a town some 35 km away from Łódź, stretched along Kilińskiego and Żeromskiego streets, the west end. Already in the 17th century a synagogue was built and a Jewish cemetery was opened nearby. A Jewish inn was located right by the exit road from the town. The house at no 34 on the market square, at the corner of Strażacka Street, and the Hassidic beit midrash at November 11 Square (pl. 11 listopada) were both home to Jewish religious schools. However, the largest school was at 13 Warszawska Street, but that one existed later, in the interwar period, when Łask had 3366 Jewish residents who amounted to 47% of the local population. After the war, only 4 Łask inhabitants were practicing Jews: Chaja Singer, Idel Singer, Braun Zainwel and Tobiasz Abram. As of now, no Jewish community exists in Łask.

School of Dialogue workshops were held in 2013 at 1 Berlinga Street in Łask, the location of public junior high school no 2. Participants were members of the school’s history club, interested in the local history as seen from Jewish perspective; a perspective the students knew very little about. Together with Forum’s educators, students embarked on exploring Jewish culture which they had known so little about. They were quite surprised by information about the size of Łask’s Jewish community. In 1793 there were 1,327 Jews in Łask (or 77% of the total population), in 1897 – 2,862 Jewish residents (or 68%), while on the eve of World War II almost 3,500 residents were Jewish; that’s half of the town’s population. 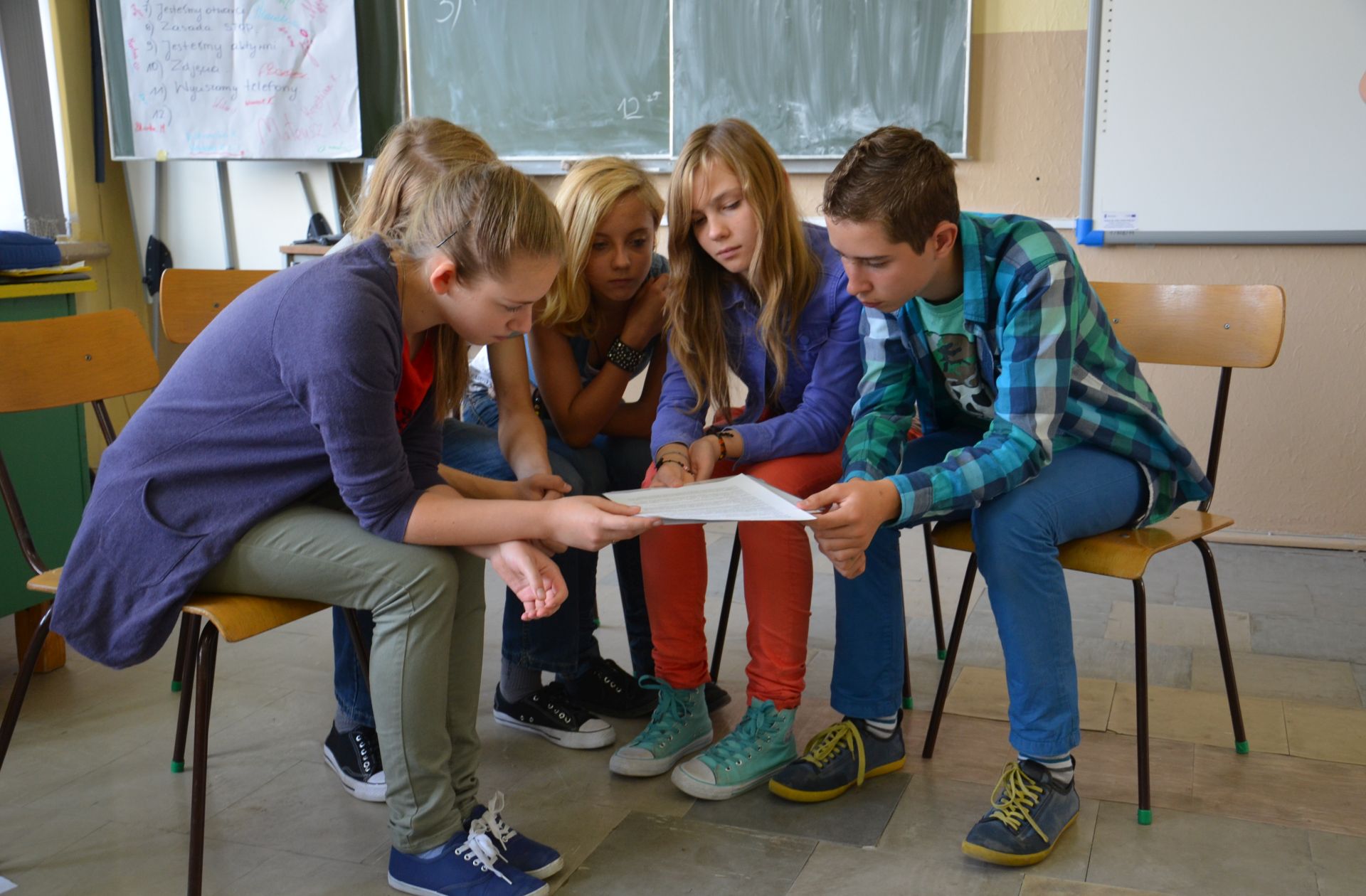 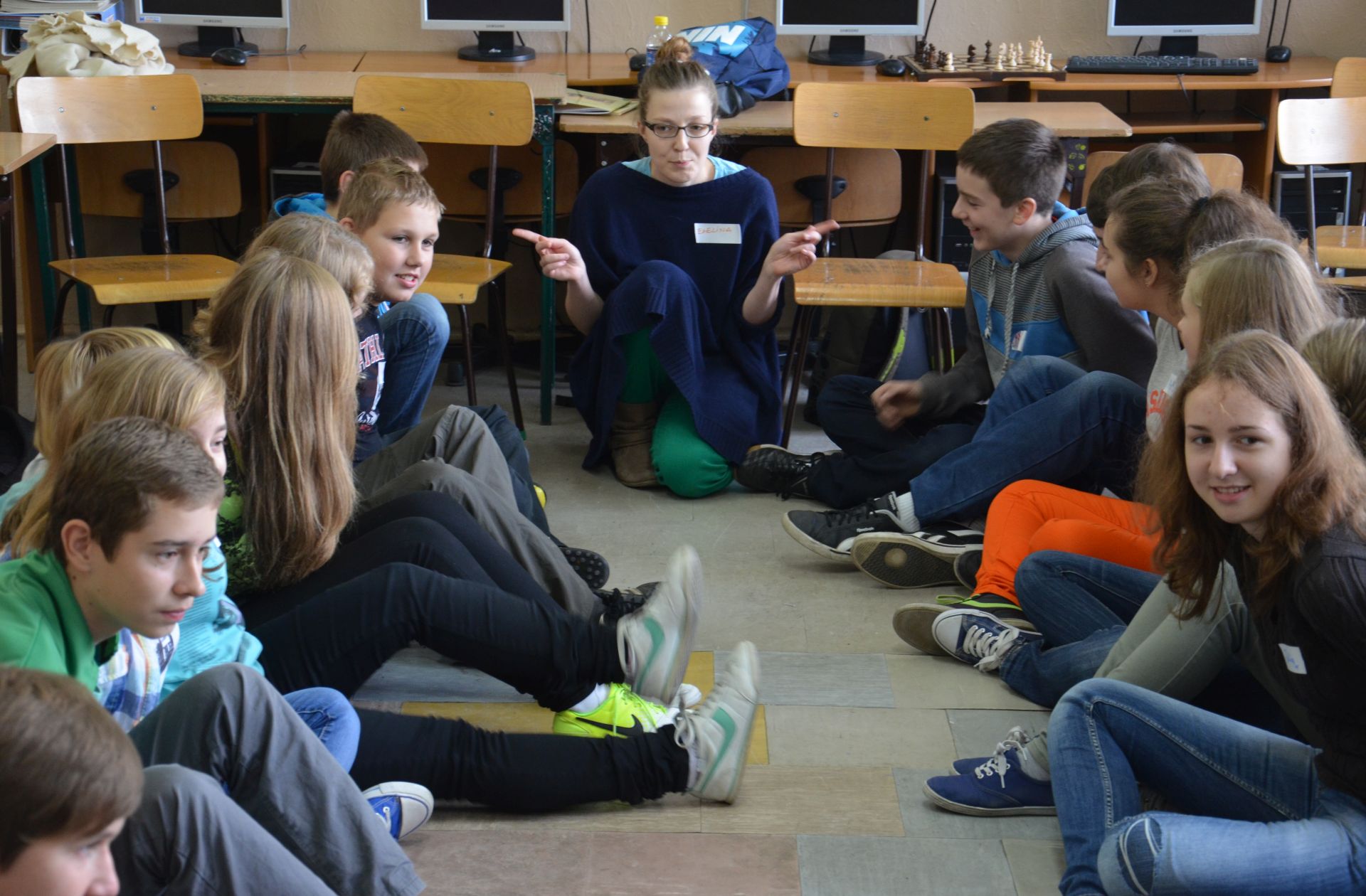 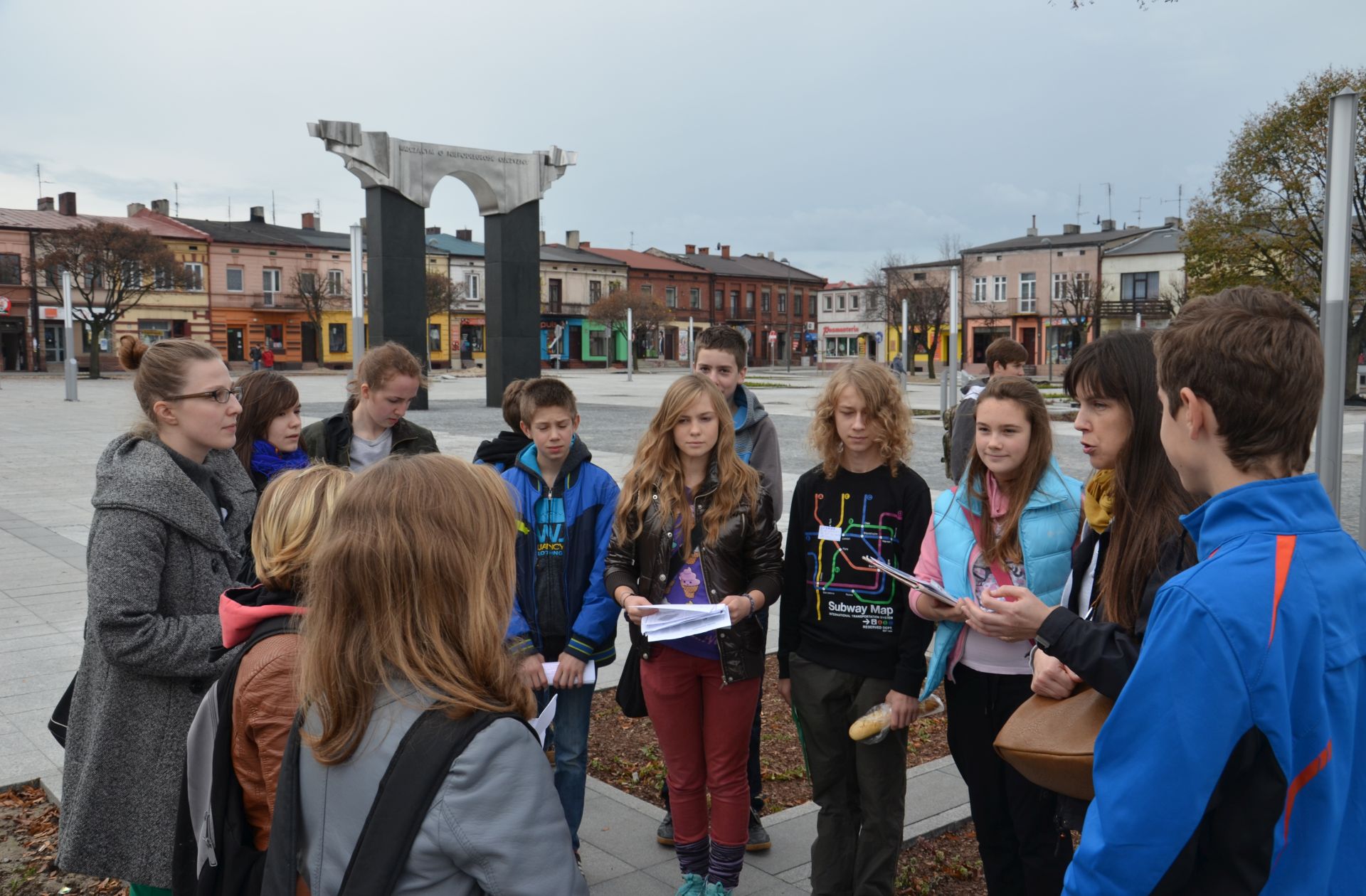 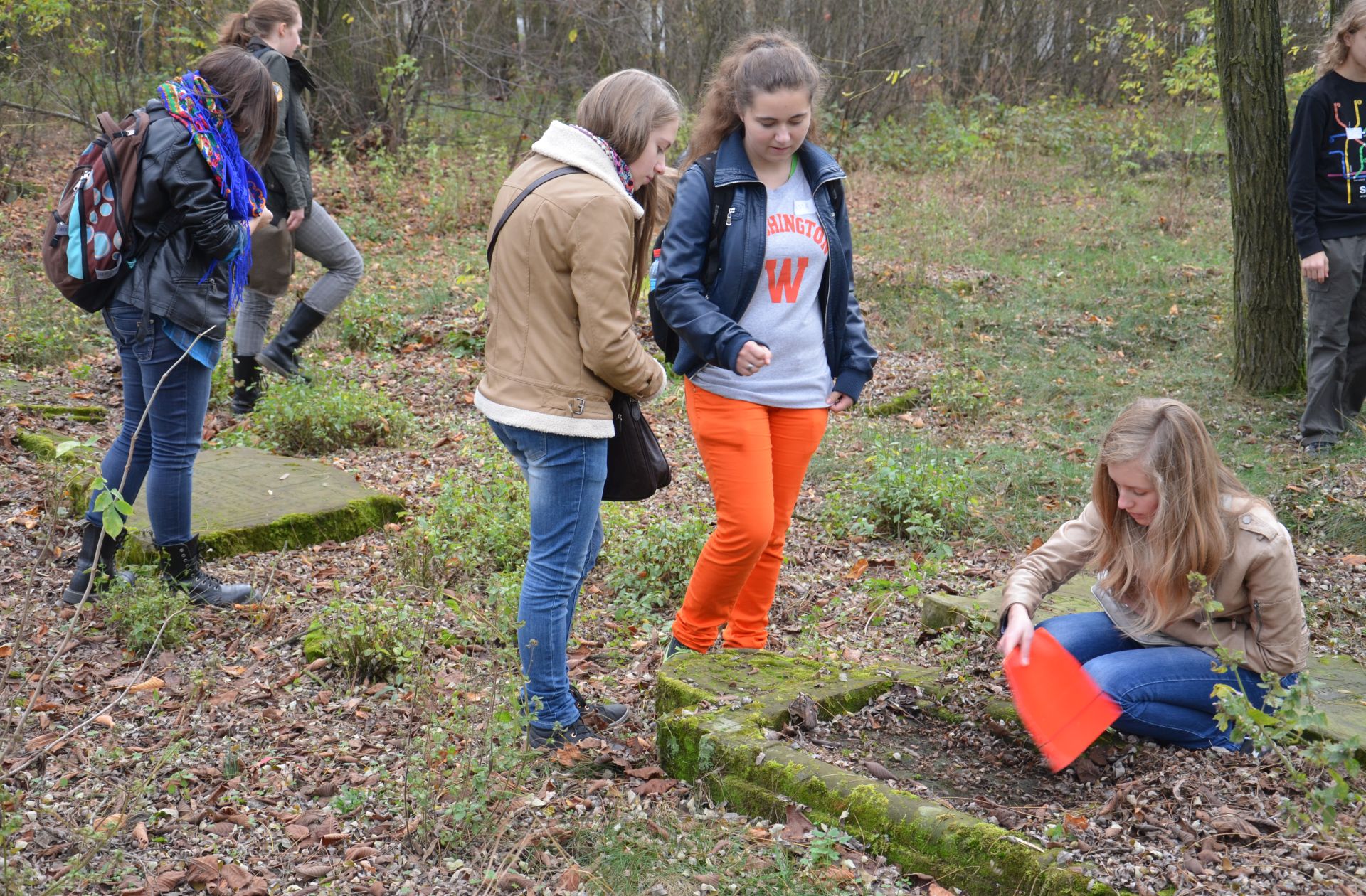 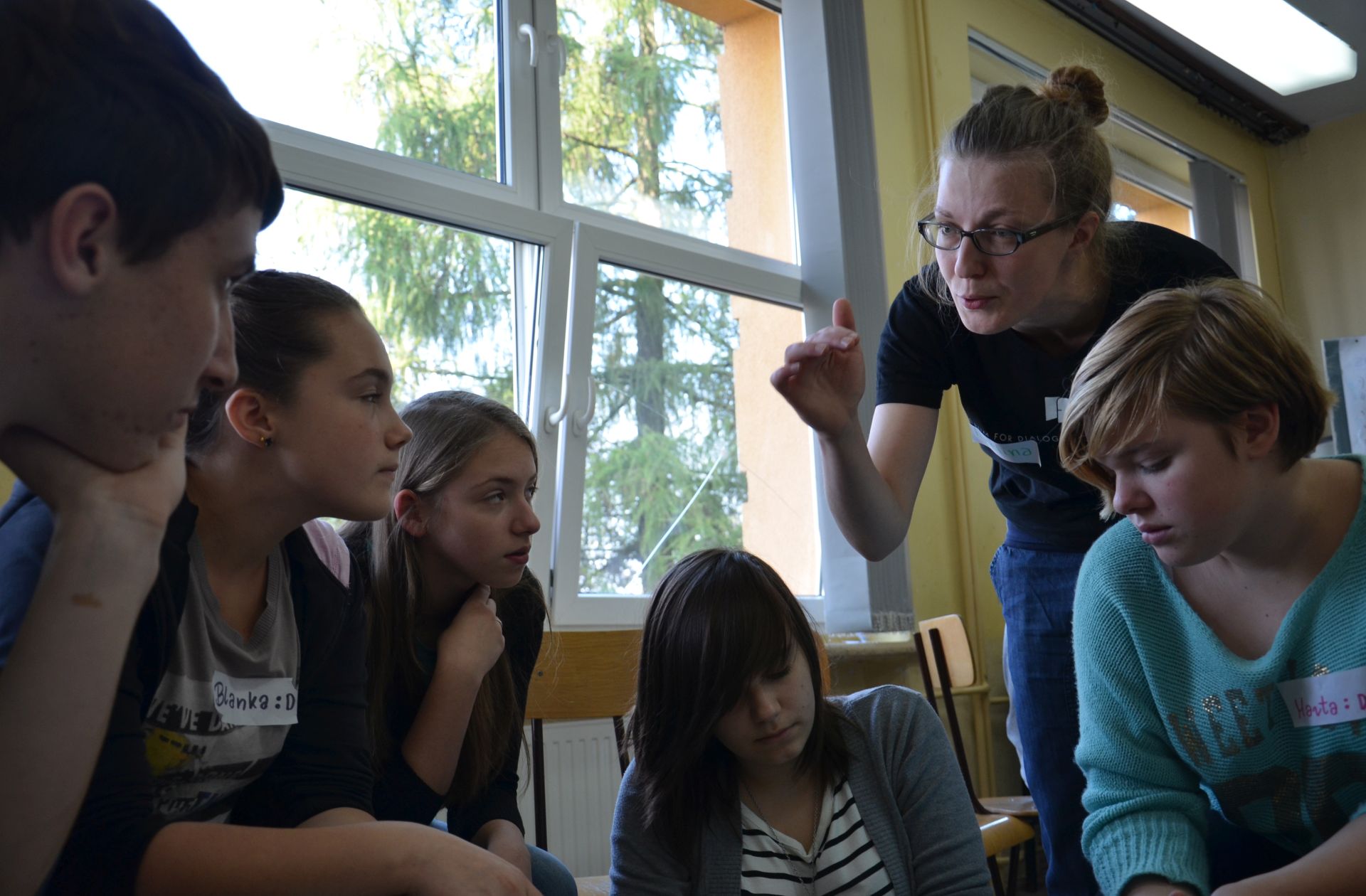 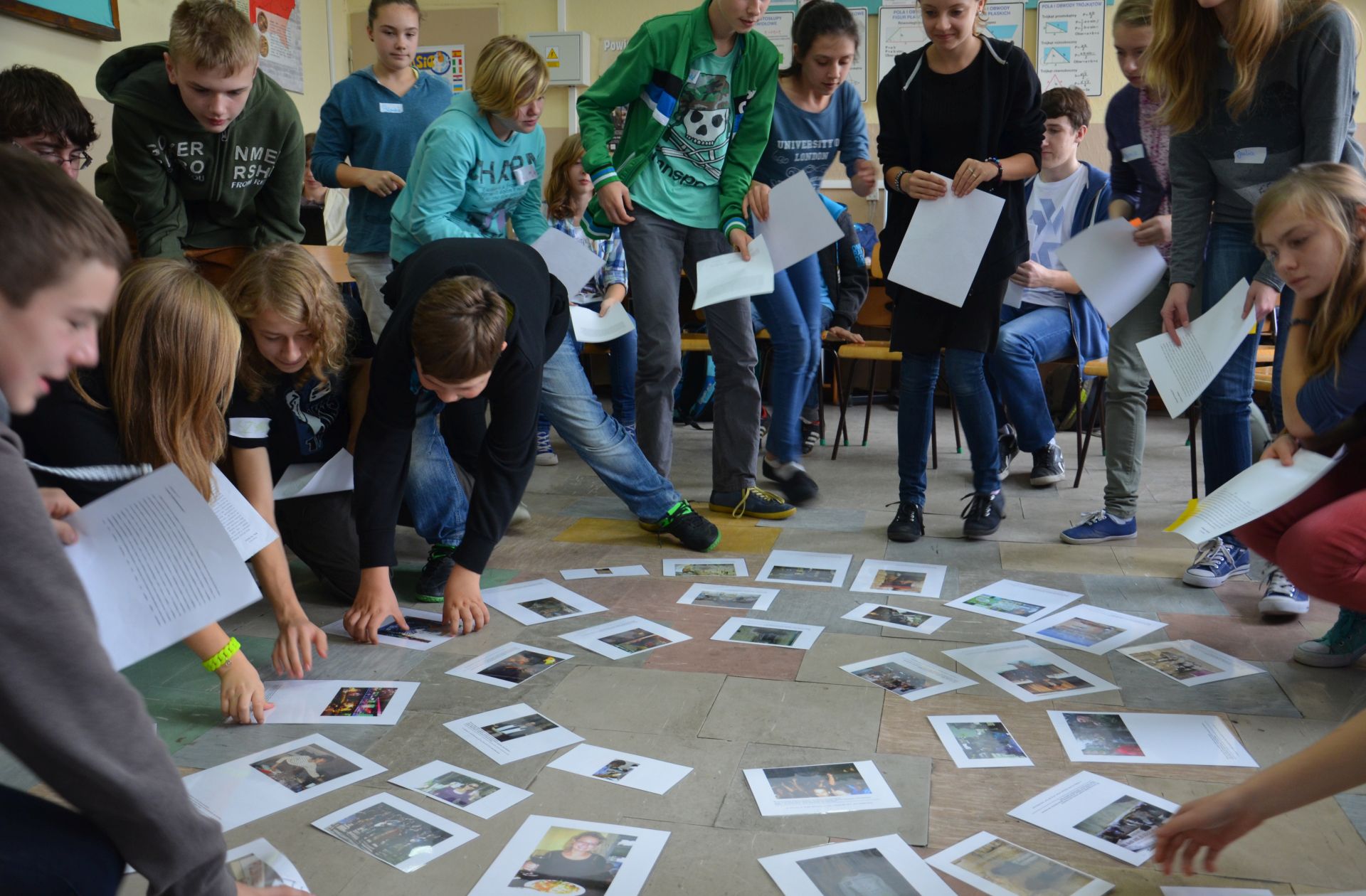 Students also asked about the co-existence of the two communities: the Christian and Jewish one. Aside from Jewish schools, there were also two libraries, sports clubs (“Maccabee” and “Stern”) and in 1919 6 out of 10 town council members professed Judaism. Jewish parties from socialist and Zionist factions were active in Łask. Some local Jews participated in the Battle of Warsaw against the Bolsheviks in 1920. Students were also curious to learn about Jewish traditions, Judaism, as well as the significance of the synagogue for a Jewish community.

They collected all this information for their final project in the form of a walking tour of Jewish Lask. They designed the route to have tour participants gradually immerse in the history and fate of the local Jewish community. Students also talked about Jewish customs and culture. They showed tour participants the synagogue, Hassidic beit midrash and the schools. They tried to point out how various elements of everyday Polish and Jewish life would intertwine in Łask. They explained about the ghetto, which was created in 1940 between Żeromskiego, Zielona and Kilińskiego streets, mentioning Zeman Kochman, who presided over the Judenrat.

It was through Kochman’s efforts that a canteen, co-op shop, a court and a hospital existed in the ghetto. But in 1942 deportations of Łask’s Jews began; most of the local residents went to Litzmanstadt ghetto, others were murdered in Kulmhof death camp. The most important stop on the tour was the Jewish cemetery, established in the 19th century not far from Łask. Students explained to tour participants the meaning of inscriptions and Jewish burial rituals.

Students wanted to imbue their younger peers not only with historical knowledge, but also with universal values such as tolerance and intercultural dialogue.

The story of Łask’s Jewish cemetery as told by junior high school students has been recorded in the form of a short film which is available on YouTube.

These workshops gave me plenty to think about. Through them I had a chance to get to know my classmates better, but made me pay closer attention to Jewish life, especially in Poland and my own town. The classes made me realize that knowing about their history I am also learning to better understand my own.

Discovering all these interesting things was like a great adventure for me. I kind of felt like half a detective, half a proper histories.

A turning point for me was a visit at the Jewish cemetery, located on the outskirts of the town. It was fascinating. I felt as if I was removed from my everyday life; on the other hand, everything seemed so personal. Our workshops were sometimes super fun and at other times they would make me brood over certain matters.

The workshops taught me that tolerance is the most important. It doesn’t matter where you come from, who your ancestors were, what is important is that you are a human being, have feelings and can feel pain.