The survey conducted in Legionowo in 2009 states that 67% of its population do not know anything about the fact there was a ghetto in their town. How can this be? Don’t people talk to each other? What happened then to the ghetto and one thousand people who on October 4, 1942, on the date of Simchat Tora, were transported to Radzymin and then to Treblinka? Where are all these people who were murdered? Where are they supposed to be if they are not in our awareness? Is there a place in it for those who came to Legionowo in the 19th century, which was really quite recently?

Jews started to settle in Legionowo when the Jabłonna – the Vistula Railway Station was built. The Gucino summer resort and the tsar’s garrison already existed back then. The majority of people worked for holidaymakers in Jabłonna Nowa which from 1919 is called Legionowo. In 1939, Jews comprised 800 out of 3,000 residents. They dealt with trade and provided various types of services. Rosenberg, Magiet and Herszkowicz had their iron shops, and Lejb Lipszyc had his wood and firewood warehouses by the railway station.

We can enumerate doctors: Finkesztajn, MD from Piłsudskiego 15 Street, Ringel. MD from Reymonta 15 Street, Binder, MD. And merchants: Gincberg, Szrut, Krongold, Rosenberg brothers, Frydaman or Berek from Jagiellońska 10 Street. And then Sterdyner, a watchmaker and his father who was a fruit wholesaler. Segała, a paramedic, Goldblat, an advocate, Feldman, a jeweller.

It was on Wednesday September 13, 1939, when Germans arrived in Legionowo. Jews were forced to work, build flood banks by the Vistula River and to irrigate alluvial meadows. They received limited food rations, prosecutions started. Shop owners were deprived of merchandise, many Jews were shot on the roads. Lucky were those who managed to hide in their houses.

On November 15, 1940, Germans set up a ghetto in Legionowo, which included the following streets: Mieszka I, Sobieskiego, Prymasowska, Kozietulska, Pomorska and Zygmuntowska. It is said that it was a nice, green area on the outskirts of the town, with some rural flair and gardens.

It was empty all around, which made it easier to notice an escapee. People from Sierpc, Rypin, Nowy Dwór, Żuromin, Serock, Legionowo, Zegrze, Łomianki, Nieporęt and Jabłonna were gathered there. The site was not fenced, but leaving ghetto was punishable by death. The ghetto was administered by Judenrat and Jewish police.

The ghetto was liquidated on 4 October 1942. Some Jews managed to flee a night before. The Polish police told them what was going to take place.

In the Nazi forced labor camp, organized at the site of the barracks, worked nrealy 100 Jewish prisoners. They built banks by the Vistula River, within the area from Żerań to Jabłonna. Some 15 kilometers or so. On the date of the ghetto liquidation, they first dug up their grave and then were executed.
It is difficult to say how many of them survived, and how many of them returned. Many of them were silent. They did not register as Jews. Probably out of fear. There are stories that long time ago, Jewish committees distributed matzah for Pesach without any charge. In March 1947, in Legionowo, 31 people came for it.

On April 11, 2012, young people from a high school in Legionowo began workshops under the School of Dialogue program about the Jewish history of their town. Students searched for information about the past and fate of people who lived there before the War. They learnt about Jewish customs, culture and traditions. On 26 April they organized a rehearsal walking tour along the streets of the town, prepared a map. They talked about multiculturalism and were a little bit surprised how much their town is different from how it was in 1939. When seeking assistance to determine the facts, they visited the Museum of History in Legionowo. In order to reconstruct the image of the pre-war town, they went to see town residents and asked them questions. They searched on the Internet and reviewed newspapers, e.g. a local newspaper “To i owo”. They talked about it at home and got their parents involved. With all the efforts and collected data, they organized a walking to for their peers and member of the Youth Town Council. 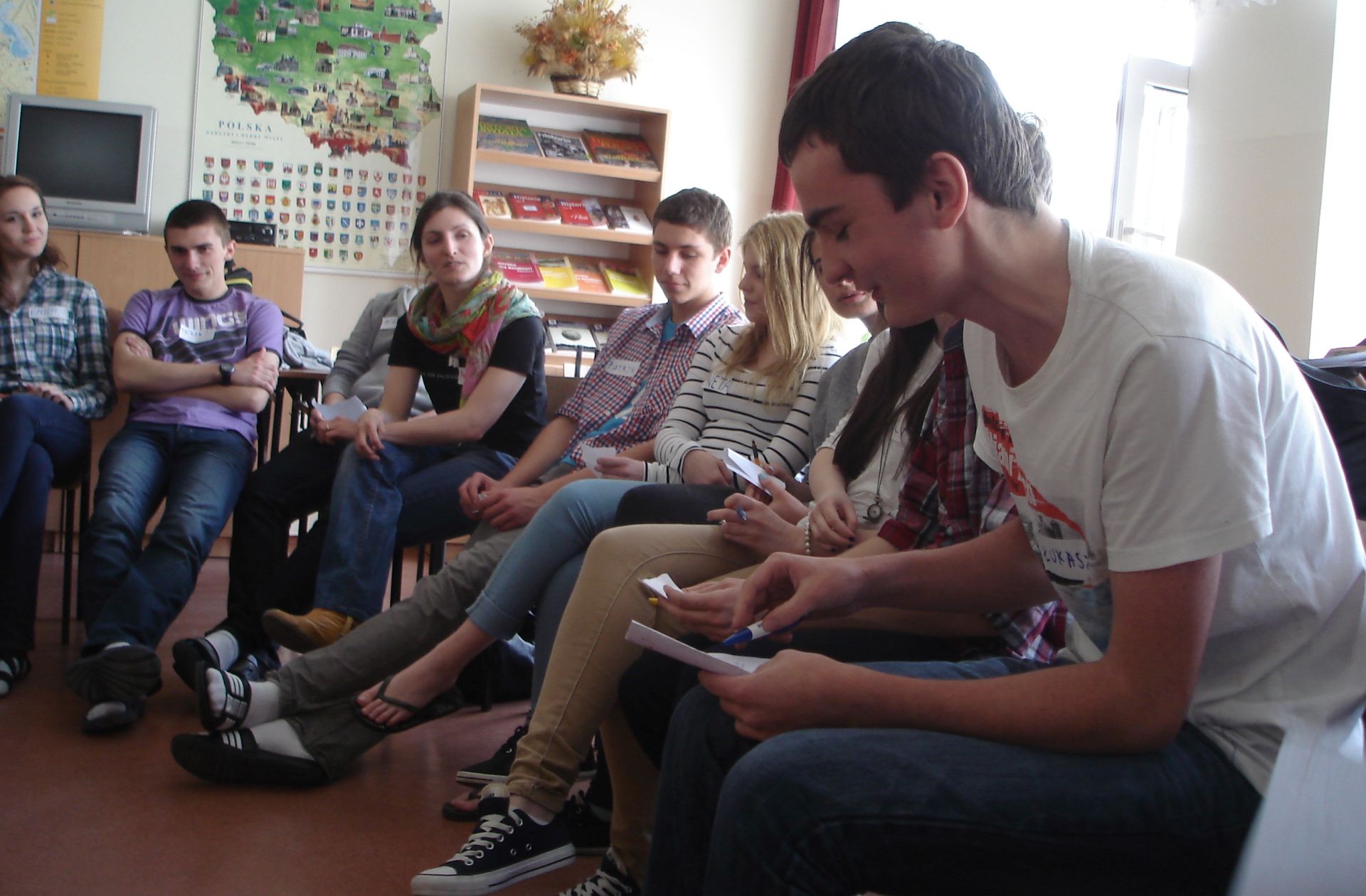 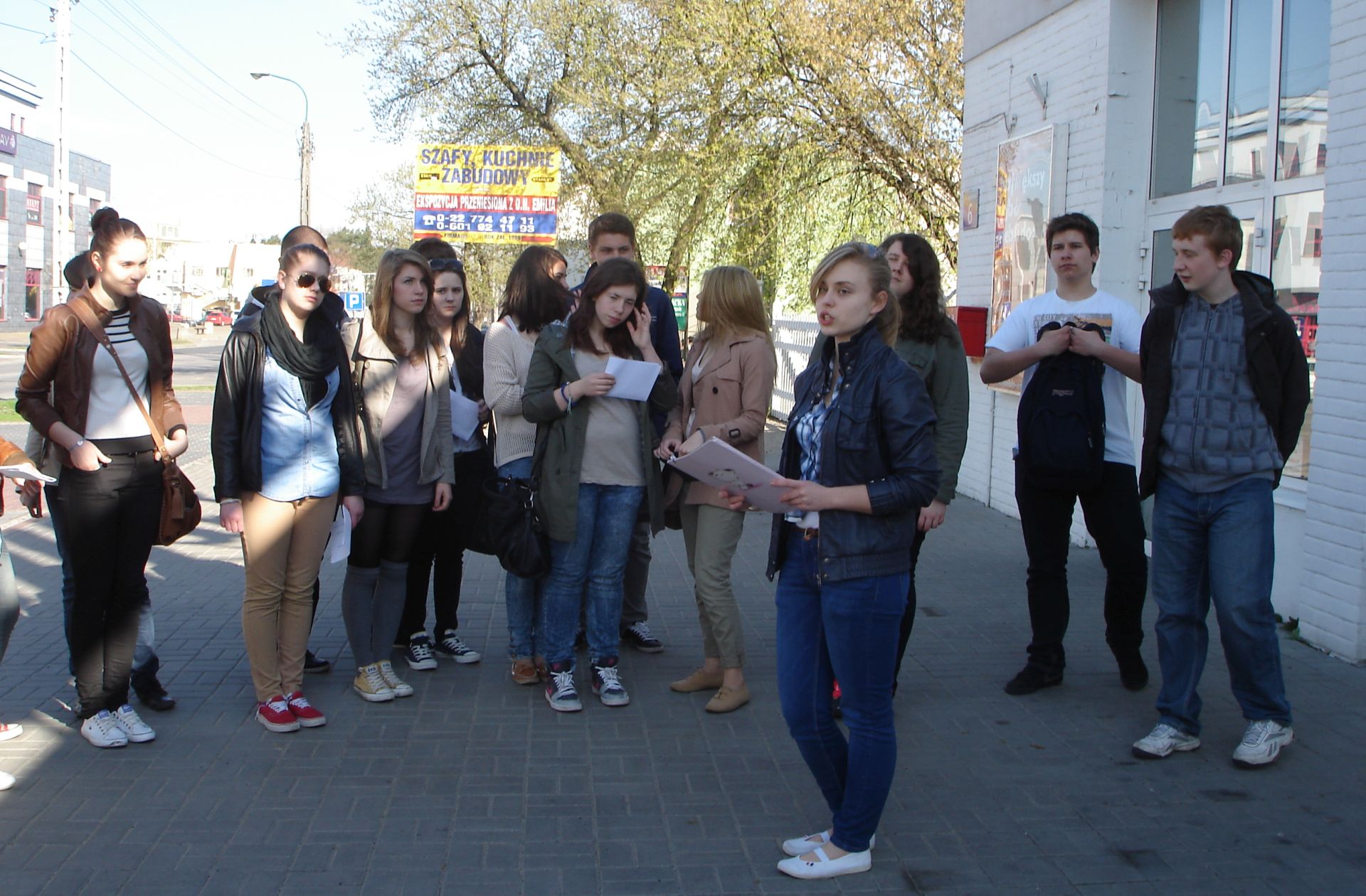 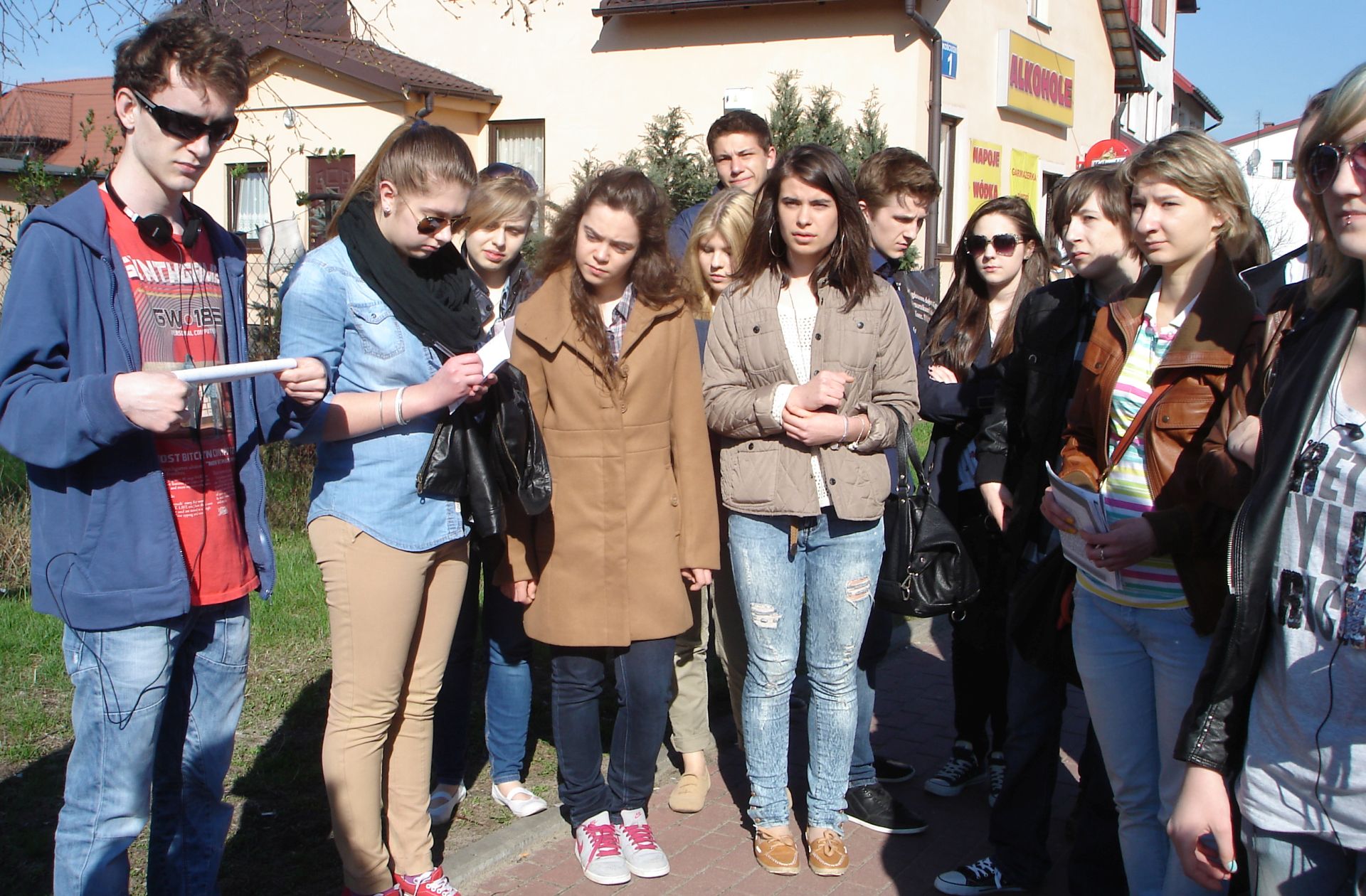 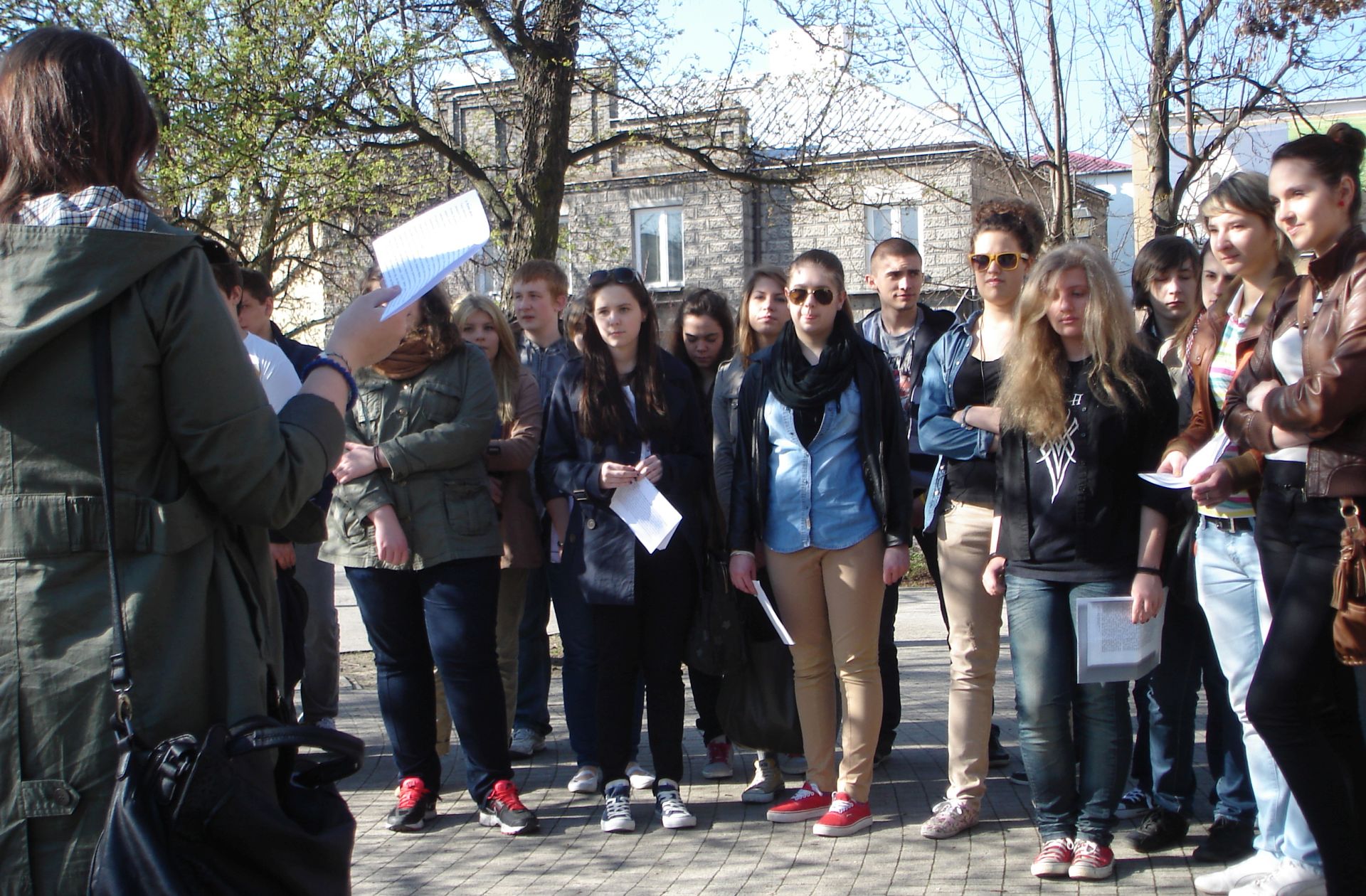 First, they walked to 3 Maja Street, at number 24, vis-a-vis the today’s post office was the rabbi’s house. Domański told them that the rabbi lived in a house owned by a Catholic, and after the Shabbat prayers the Jewish community of Legionowo would met there at his place. Next, they went to 6 Jagiellońska Street where now a furniture shop Emilia is located. The synagogue used to stand here, but the number was 12. During the walk, students told about Daniel Segal, a paramedic. He consulted people at the corner of Słowackiego and Kościuszki. A decorative prescription from March 11, 1937 which reads “A table spoon every two hours” has been preserved to this day. Daniel Segał was an assimilated Jew. In 1940, he was relocated to the ghetto with his wife, his daughter Tosia and son Jakub. His family was murdered there, but he managed to escape. Claiming to be an itinerant witch doctor, he walked from one village to another and treated people. In 1948, he returned to Leginowo, lived in the Grzelak tenement building at Batorego Street. Then, he was baptized and given a name of Tadeusz, and he died in 1960.

The walking tour walked further to the tenement building from 1931 which was once owned by Blusztejn Pejsach, at the corner of Piłsudskiego and Kościuszki Streets. Before the war there was, among others, a photo shop “Zachęta”, a dentist and a textile shop “Korcza”. One could buy there textiles and knitted materials. A nice wooden house at Kopernika 14 was owned by Lejb Lipszyc. He had his wood warehouse at Kopernika and lived with his wife and two children, with Debora and Abraham, just next door. Lejb Lipszyc died on June 5 1940, and children probably left to Israel after the war. At Kopernika 16, students explained why the building errected there in 1930 is called the Petersburski tenement building. Before the Second World War, it was owned by Jerzy Petersburski, a pianist and composer. He is the composer of “Tango milonga”.

The market square in Legionowo was once a center of commerce in the pre-war town.

Students told about merchants who came there to displayed their stalls and sell meat, sweets, flour, soap, fruit and nails.

Today at 15 Piłsudskiego, then 15 Królewska, the Shrut and Gincberg construction company was located in one of the premises. A big signboard was hanged above the entry to their shop. The building is still there, but not the signboard.

At 24 Jagiellońska, the Jewish school was located, now it is an consumer electronics store. When talking to young students, Ms Helena Kuligowska told them about the events of June 22, 1941On that day the Germans invaded the USSR. Helena Kuligowska was on her way to the church with her friend, Andrzej Jabłoński, not far from Mickiewicza and Jagiellońska junction. When they reached the school, the bombing began. They hid by one of the walls of Yeshiva but just a minute after a bomb was dropped on the building. The wooded structure was damaged and children were injured. A German doctor from a nearby hospital helped them, but the building was not rebuilt. At 65 Sobieskiego, the ghetto soup kitchen was located, administered by the Jewish Social Self-Assistance Committee. Once could buy a meal voucher the day before for 10 groszy. The old, the sick and the poor did not pay, just came. There was one floor and 30 beds in the hospital for infectious diseases. It operated from 1941, but today, there isn’t even a trace, no photo, no recollection of where it used to stand. The Judenrat building still stands. Between 1940-1942, it was managed by Rozenberg; it was a brick building at 77 Chrobrego Street.

The group walked, wandered about and observed. They all tried to find any traces. Maybe because of them something has changed in Legionowo? Maybe today the survey would give different results?

When I tell my family what I have learned, they are often bewildered. Jews lived here? This a question I hear a lot.

Jewish religion, culture and tradition are very interesting, and learning about it and discovering how greatly these people shaped the place where I live gives me even more pleasure.