Łowicz is a town in Łódzkie voivodeship, located on the Bzura river. The same dreary Bzura where Poland fought its biggest battle against Nazi Germany in September 1939 – the battle of Kutno, the battle of Bzura. The reason why Bzura is so well-known.

But let’s return to Łowicz and its Jewish history; let’s move back in time to the period before the War, before the 20th century began and stop only in the 16th century, when first Jews started coming to Łowicz. Initially they would only attend Łowicz open air markets; two hundred years later, in the 18th century, they started to settle in the town, mostly around the area of Zduńska, Browarna, Bielawska and Podrzeczna Streets, as well as at New Market Square (Nowy Rynek). Most of them were merchants, some were craftsmen, butchers and goldsmiths, tailors and bakers.

Jews kept coming to Łowicz. In 1841, there were 940 of them, comprising 22% percent of the town’s population. A soap factory and a steam mill were established. All stocking-makers and embroiders in Łowicz were Jews. Three out of four hairdressers, bakers and upholsterers were Jews. By the end of the 19th century, 13 cheders were operating in Łowicz. Bookshops were opened: the first one belonged to Mr. Kronenberg, the second one to Mr. Arensztajn. At the beginning of the 20th century, a library was established in Łowicz, where lectures and performances would be held.

Between the two world wars, a Jewish stoneware factory, distillery and brewery operated in the town. Small family-run businesses produced hats. A Jewish Grammar School was opened at Browarna Street. Right before the outbreak of World War II, Łowicz had 4,500 Jewish residents, which accounted for 25% of its population. All of them were locked inside the ghetto that the Germans created in 1940, behind a brick wall. Bricks used to build this wall were taken from the local synagogue, among others. The ghetto became home to Jews of Łowicz as well as those from surrounding towns and villages; altogether 8,000 people. A little over a year later, the ghetto was liquidated, and its residents were taken to the Warsaw ghetto. The last ghetto residents left in the fall of 1942. Around 100 Łowicz Jews survived the war.

None of the synagogues still stand. The one at Zduńska Street was burnt down right after the war began, the one at Browarna Street was torn down in 1995 with a shopping center built in its place. Only the Jewish cemetery survived. Some of the headstones were used for paving Bzura riverbank, and after the war some more were used for the purposes of erecting a monument to Polish-Soviet friendship. When the monument was torn down, the matzevot where brought back to where they belong – the cemetery. 400 headstones can be seen at the cemetery now. 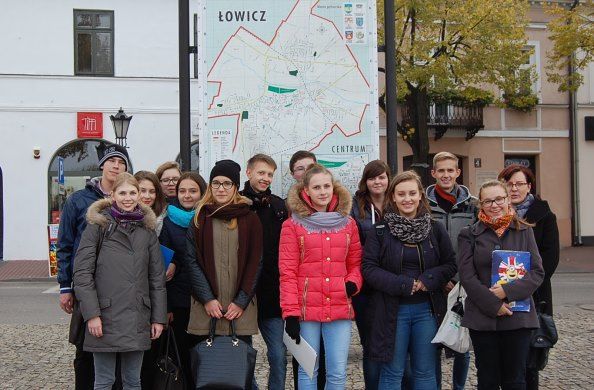 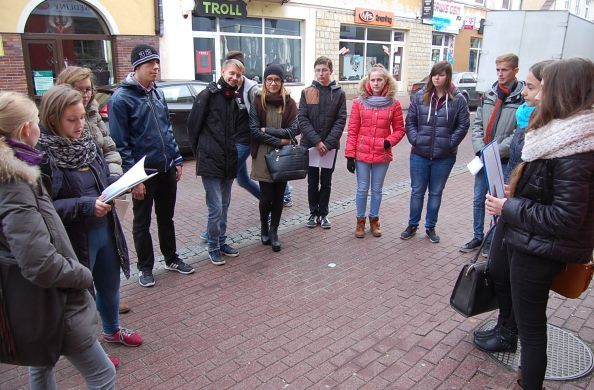 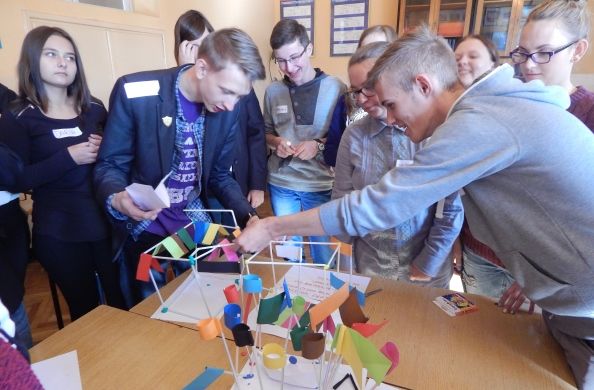 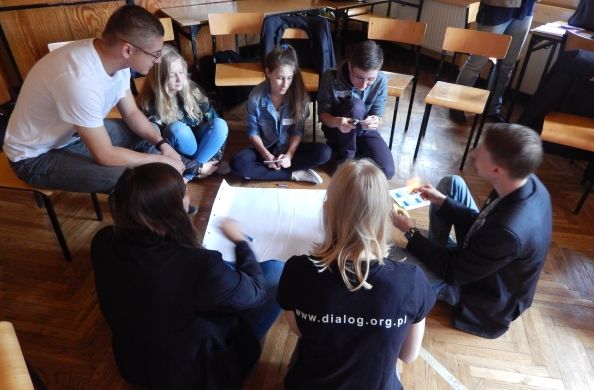 They met up with Krzysztof Kaliński, mayor of Łowicz, and recorded an interview with him. They took him to the Jewish cemetery, where Krzysztof Kaliński told them about the site’s history, about the headstones and a bit more about Jewish Łowicz. Some of the students even went to Auschwitz-Birkenau.

The walking tour through Jewish Łowicz organized by workshop participants had two parts. The first was a well-designed multimedia presentation about Jews of Łowicz and Judaism in general. A little later, on November 18, the group conducted the tour that resembled an urban game for a few dozen students from second and third years of high school. They began in the school, where participants were divided into groups, chose team leaders and learned the rules of the game.

Every team received maps and instructions as to what should be added to them, what kind of information they should look for.

The first stop was the site of a former synagogue that was burned down in the war. Next, groups headed to the monument commemorating three nations – victims of German work camps: Jews, Russians and Poles. The third stop was Łowicz Jews Commemorative Chamber, showcasing history of Jews in Łowicz, from the earliest period up until the Holocaust. The fourth stop was the old market square that used to be the border of the Łowicz ghetto. Finally, the groups headed back to the school, where they received diplomas and were treated to snacks.

Students want to publish a guide to Jewish sites in Łowicz. They say they have been transformed – that now they understand what respect for the past is and how important remembrance is. That we are all equal, that we are all people.

I was moved by the story of one US American family that wanted to learn more about their ancestors – Jews living in Poland. Watching the short film, I kept thinking how it feels not to know anything about your family.

Bringing the Jewish community of Łowicz back to life was something positive; through it, I and the other students understood what it used to be like here and that returning to that period is our way of paying respect.

With every hour, task and piece of information I felt that the topic is ever more interesting; although many skip over it, this is fascinating stuffs and such things are very much needed. These workshops showed me that the past is a big part of the present.