School of Dialogue at Junior High Sports School No 3

In 2009, a statue by Israeli artist Yael Artsi entitled Prayer was placed on the main square in Międzyrzec Podlaski. The figure sculpted in red and black granite is to raise associations with blood, earth and man. The smoothness of the figure is contrasted with the coarse texture of the prayer shawl’s tzitzit. It symbolizes the gap between the Jewish life in Międzyrzec and what is left of it.

The town used to house a synagogue and 20 houses of prayer, 45 cheders, a Jewish slaughterhouse, a hospital and two cemeteries. A weekly magazine entitled Podlaszier Lebn was published here, as well as books in Yiddish, and the Jewish volunteer fire brigade had its own orchestra. Most employees of the Międzyrzec brush factory were Jews, generating millions of dollars of profit, and their goods were exported to China and America. Before the war, Jews amounted to 75% of the inhabitants of the town. During the 1942 liquidation action, Germans deported most of them to death camps in Treblinka and Majdanek.

Today, the only material testimony to the almost 500-year presence of Jews in Międzyrzec – apart from reconstructed buildings of the fire brigade and hospital – is the Jewish cemetery. However, a lot is happening in the town. Międzyrzec became a partner town of Petah Tikva in Israel, Jewish trips visit the town and the school organizes a student exchange with Israel. And finally, School of Dialogue workshops are organized at the Junior High Sports School.

Through the program, students are able to rediscover their town. Most of them visit the Jewish cemetery for the first time. They find out the meaning of words such as mikveh or matzevah, and learn where the Jewish slaughterhouse and synagogue used to stand. Workshop activities prove to be a novelty, and the independent project work poses a challenge. 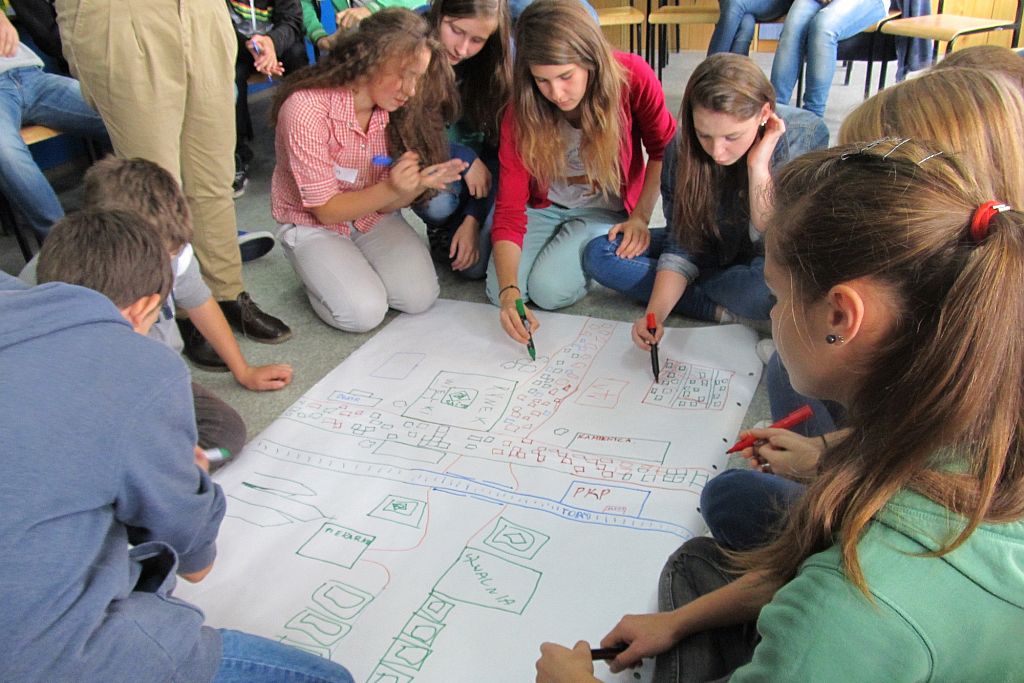 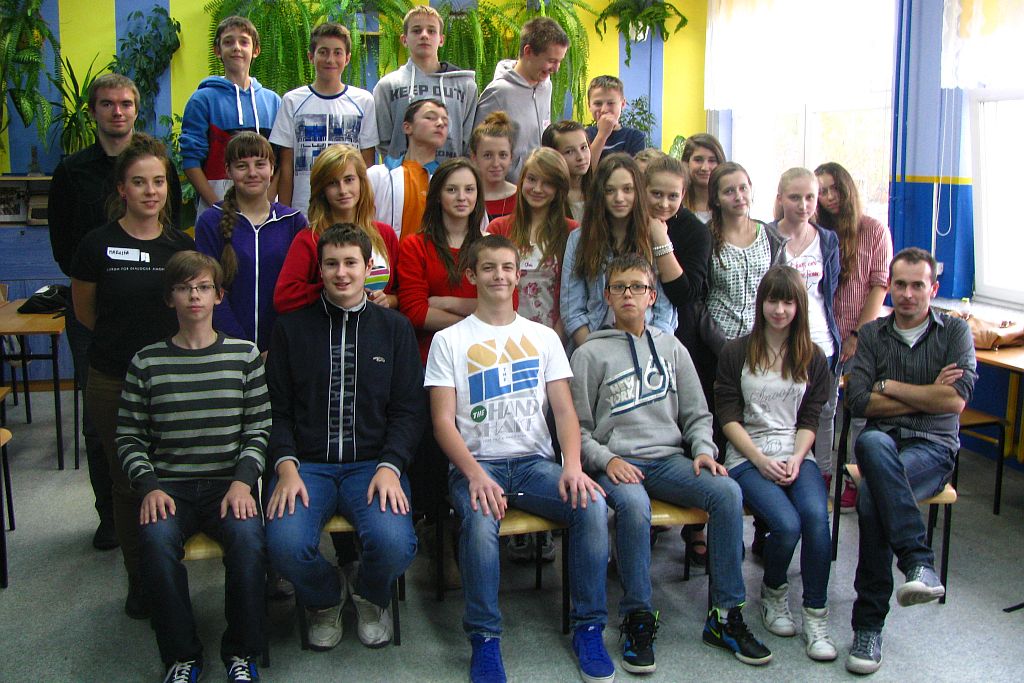 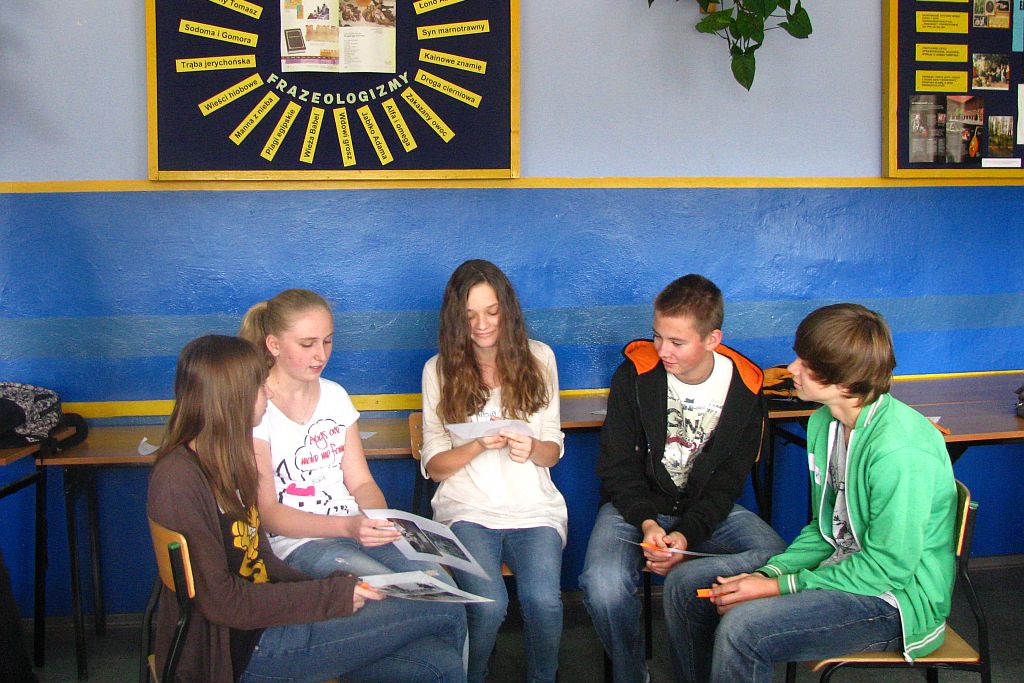 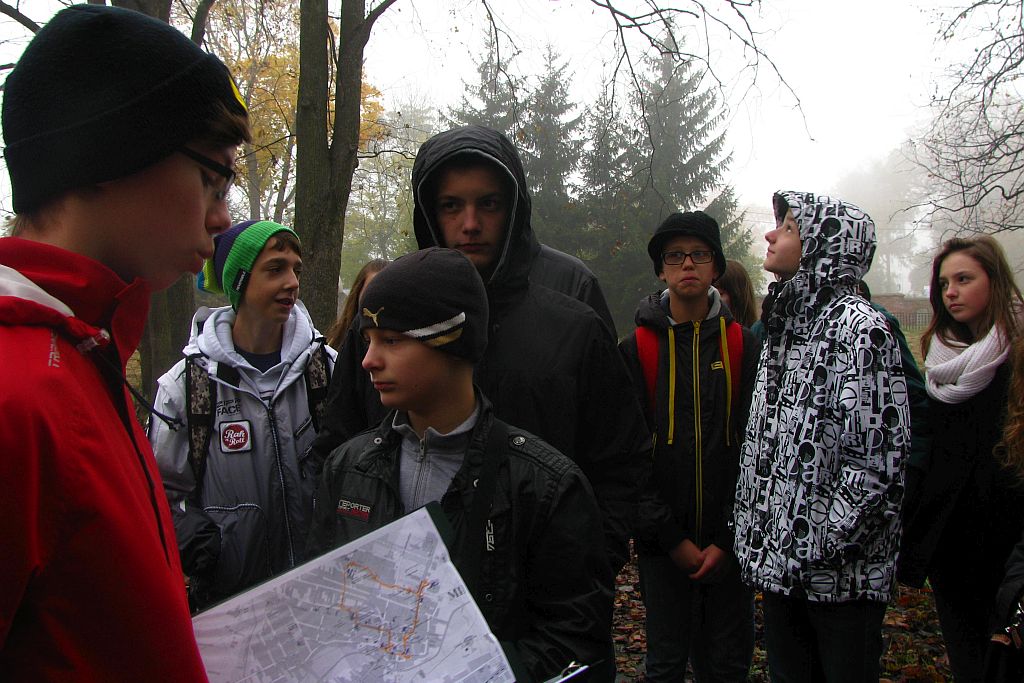 During one of the workshops, students meet with a graduate of their school, Mateusz Borysiuk – a PhD student at the Institute of Political Science of the Maria Skłodowska-Curie University fascinated with the history of Międzyrzec Jews, who works with national minorities of southern Podlachia and is eager to talk about his research.

After weeks of preparations, reading publications and looking for information on the pre-war Międzyrzec, students of the School of Dialogue invited their peers from other schools to a walking tour through the town of Międzyrzec Jews. They go to the cemetery, where Bartek talks about the symbols found on tombstones: what a menorah, a lion or hands signify, and that a tree with leaves denotes premature death. Students move to the building of the bristle room – almost unchanged, merely plastered.

Then they go to “Szmulowizna”, in front of the former “Olimpia” cinema, which retained its name, but now houses a club. On to the building of the former Jewish, now municipal hospital. And to the place where the synagogue used to stand, now occupied by blocks of flats. And finally to the main square, where women muffled in shawls used to sell goods from wooden stalls, and where now the Prayer sculpture may be seen. The tour ends with the exhibition of students’ works Collagraphy and linocut inspired by Jewish motifs. Everything is documented on film and in photographs. Students’ accounts prove that the former inhabitants of Międzyrzec are no longer that alien to them, while the contrast between the coarse tzitzit and the smooth figure in Yael Artsi’s sculpture seems to have become slightly blurred.

Thanks to these classes, I know much more about Międzyrzec.

I found out the meaning of mikveh, synagogue, Jewish slaughterhouse. I’m glad I could get to know the Jews of old a little bit and I hope this learning process won’t end with just a couple of workshops.

School of Dialogue program in Międzyrzec Podlaski was made possible by the support from PHYLLIS GOULD and ROBERT POTOKER.

Project co-financed from the funds granted by the Dutch Jewish Humanitarian Fund.