School of Dialogue at Nicolaus Copernicus High School No 2

“We can turn back the time while looking at old photographs.”

Boys and girls from the Nicolaus Copernicus High School decided to base their project about Jewish Mielec largely on photographs. When working on an album and a walking tour, they mainly used the collections of Jadernówka, the Mielec Museum of Photography, located in the building of a former photography studio owned by August and Wiktor Jaderny, which before the war was the place where artists would meet. This photography studio had immortalized the reality of pre-war and war times, also the Jewish community. 3,020 Jews lived there in the 1930s, constituting over half of the town’s population.

The Jewish community in Mielec developed rapidly. At the end of the 19th century, the town housed two synagogues, Jewish political and sports organisations, baths, a ritual slaughterhouse, two cemeteries and forty one shops owned by Jews. At the end of the 19th century, a new brick synagogue was built to replace the old one. It had two towers. Its interiors were decorated with polychrome depicting scenes from the Creation of the World and the Flood – which was obviously far from tradition.

Students participating in the School of Dialogue program wanted to present the richness of Jewish history and culture in Mielec to their peers. They invested great efforts and time in preparing a location-based game, and were actively involved in search for information at the library in the Regional Museum. Students in charge of preparing the album with photographs sought assistance from the Jadernówka director. They also talked with town residents about their personal recollections. They met with the son of the book shop owner whose family has lived near the market square for a few generations.

The location-based game was organized on June 26, 2012 for high school students representing different ages. Participants divided into task groups visited six places which were introduced to them by students acting as guides. At each point they had a task to perform. In a forest close to the market, where a sport field and an athletics infrastructure of the Makabi Jewish Sports Society used to be, the participants had to go over an obstacle course in order to check their physical fitness. All tour participants were surprised to learn that the fruit and vegetable market is located in the place where Jewish sport clubs from Mielec and Radomyśl used to compete with each other. 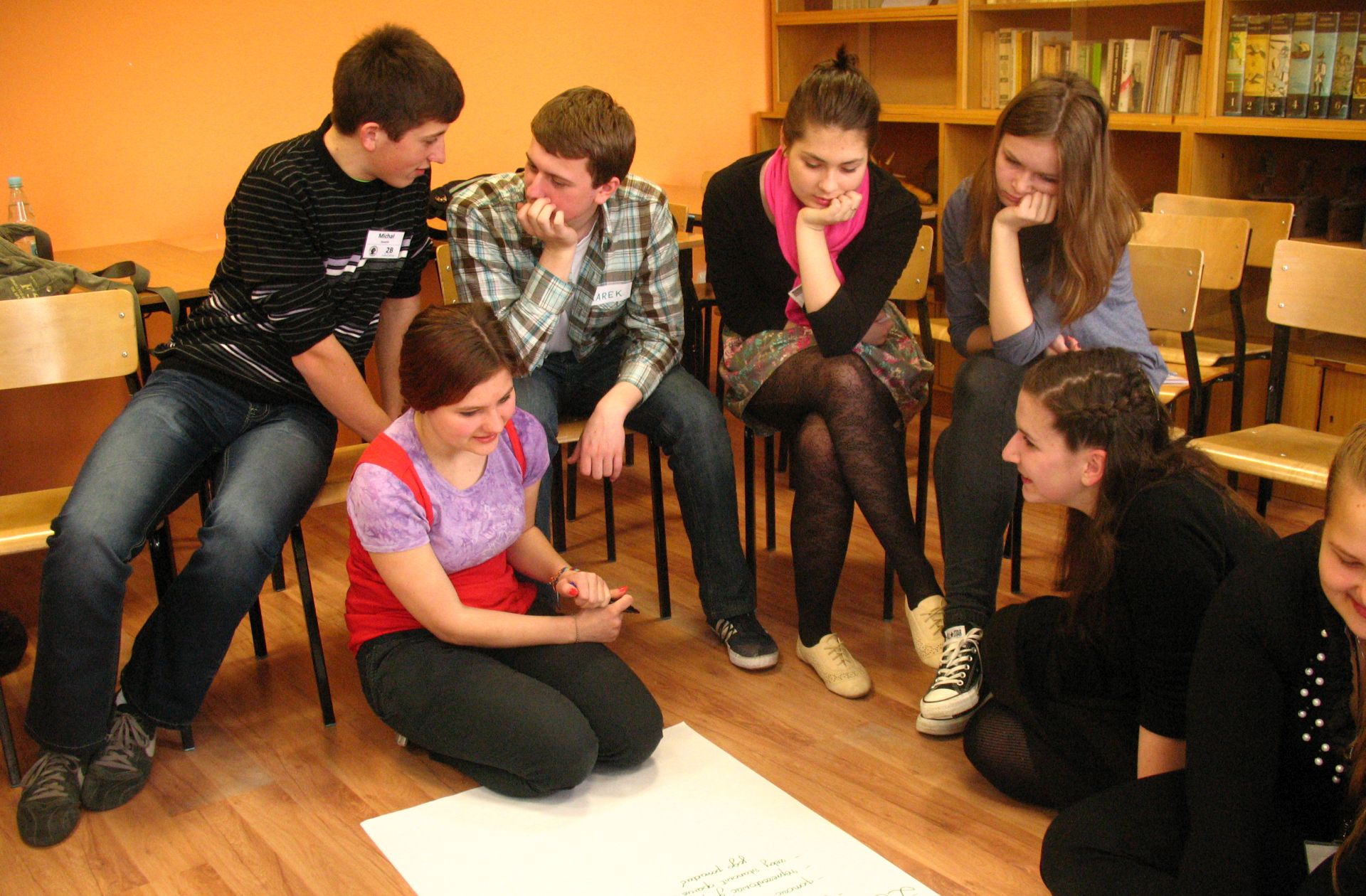 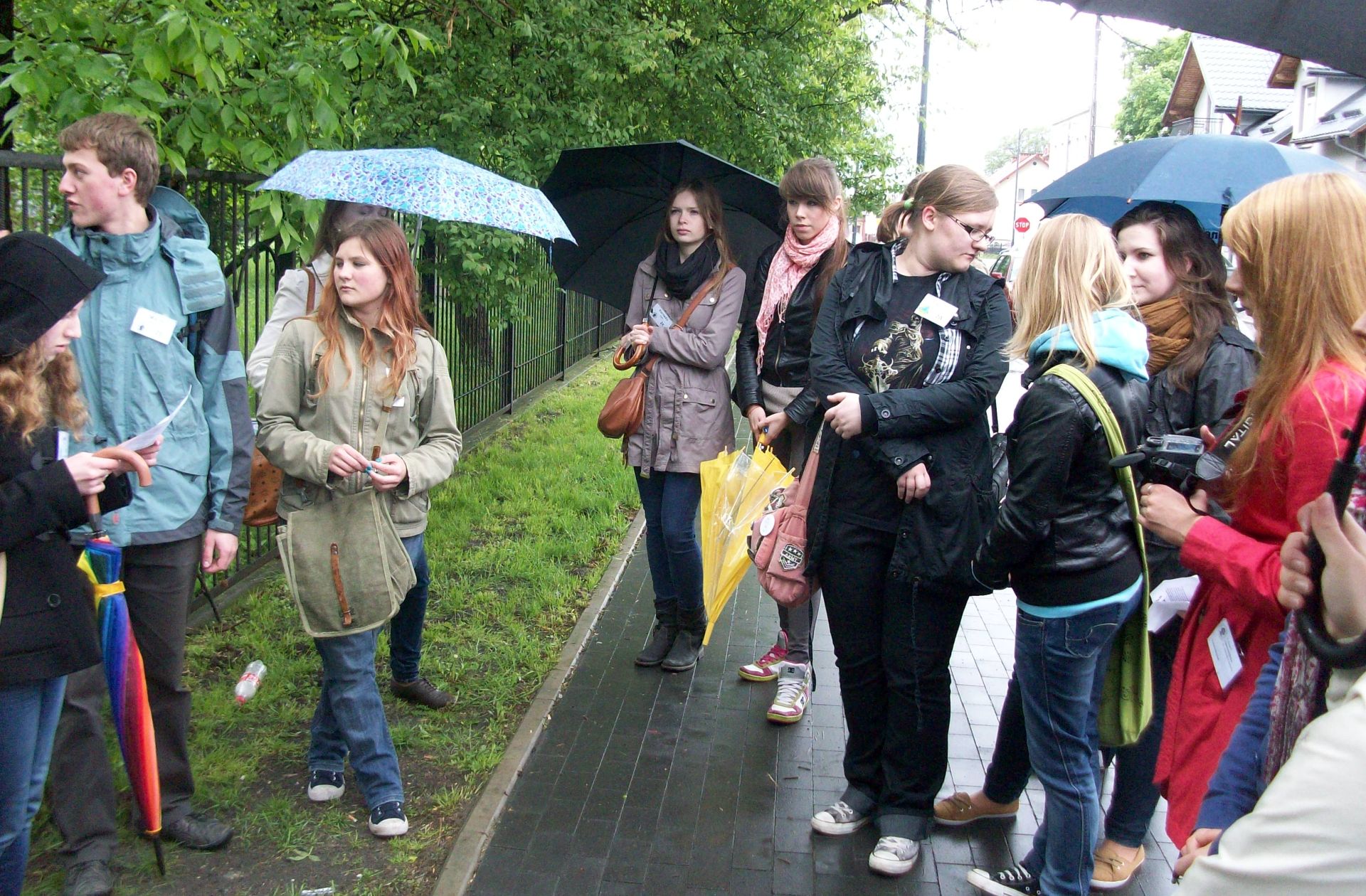 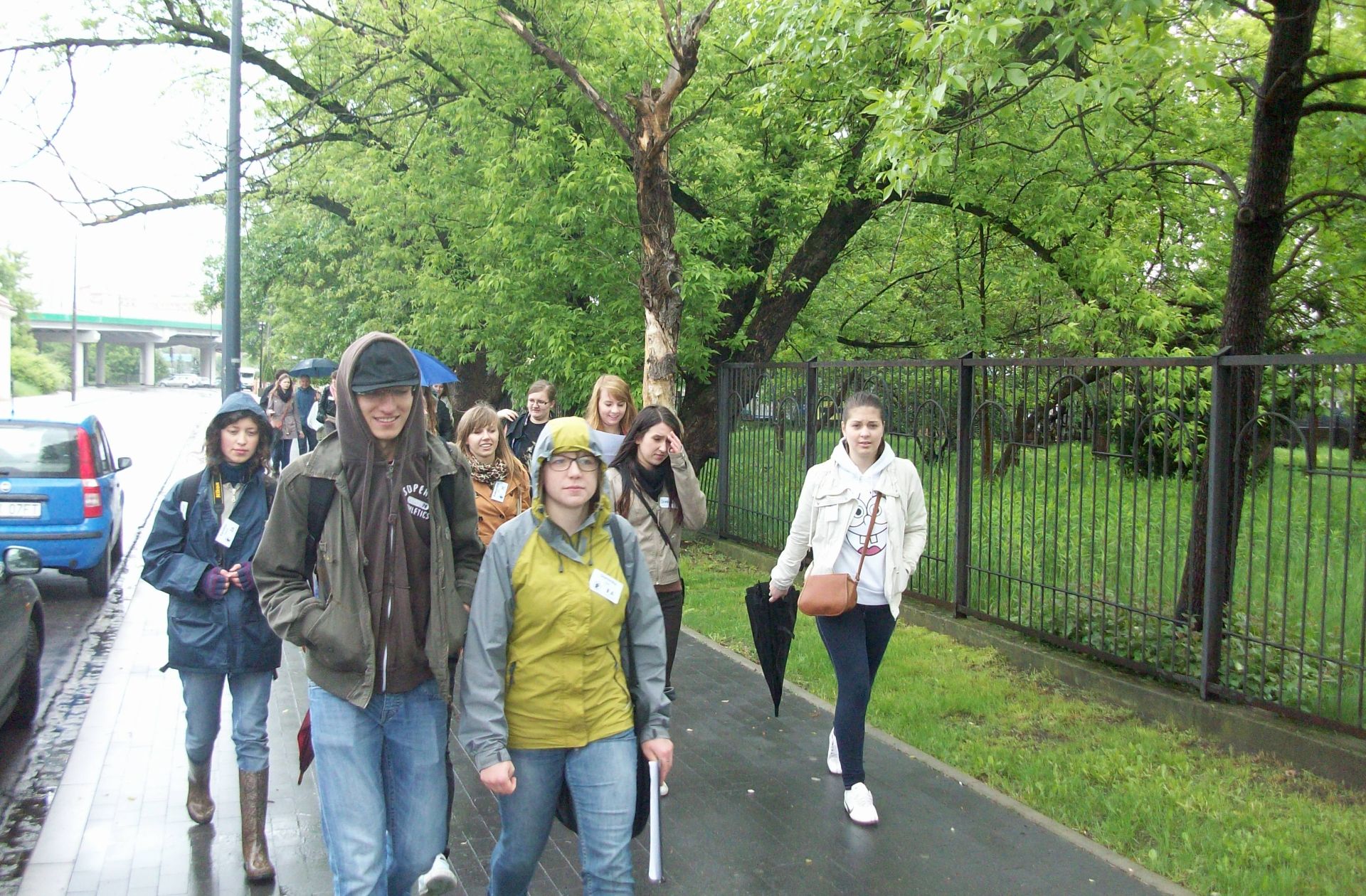 Then, the tour participants entered the cemetery where they saw a monument in the memory of Jews from Mielec and matzevot: the ones that “stood” in the cemetery and those recovered from Wisłoka in 1993. During the war, these headstones were used to strengthen river banks, today the majority of them has been returned. Young people placed stones on the matzevot as a sign of remembrence.

By the school building, which was funded in the 19th century by Baron Hirsch, a Jewish philanthropist, the tour participants could not only hear about Jewish education, but they also had to solve various riddles related to Jewish culture. Next, the tour led to Dębickis’ bookshop where groups could hear anecdotes about everyday life before the war and mutual relations between the two communities.

At the market square, where the entire social and economic life of town residents was concentrated, students had to match the pre-war photographs of Jewish Mielec to the buildings that now stand there. The tour guides also used memories of Ms Helena Schreiber concerning one of the photographs:  “Jews owned all the houses and shops at the market square. The Sternglass Family lived in a large building with a black roof and they also run a store with clothes for women.

The building with a small tower in the corner, deep inside, housed a tax office in Mielec. And chocolates were sold in a round kiosk next to the building with a dark roof. (…) All children would go there to buy sweets. The other kiosk, located at the centre of the market square, was owned by Lejb Strauss from Dębica.”

The last stop of the tour was the place where the synagogue in Mielec used to stand. Today there is a stone with a plaque commemorating the fire at the synagogue which occurred during the war, and the Jews who died in fire. This is where the participants learned about the extermination of Jews from Mielec. Students presented an album entitled “Jews from Mielec on Photographs”, created for the occasion.

At the end, after completing all the tasks, the tour participants were served a Jewish dish but had to guess the ingredients. The game proved ambitious and attractive for its participants, who were interested in discovering the new face of their town.

After completing the project, its authors were pleased that they had learned a lot about Jews who were ordinary people similar to them.

Sure you have to read a lot, walk a lot, search a lot when preparing the tour, but it gives a lot of pleasure. Sometimes you encounter an inaccuracy and then you need to find alternative sources. I definitely feel motivated to search deeper, do more