This time students involved in the project were from the third – and final – year of Mława’s junior high school. Another group of young people digging in Mława’s history, first in a hit-or-miss kind of way, than more and more consistently. In the town of Feldhajs, Flajszers and Gibarskis. Grinbergs, Rozenbergs and Rajchgolds. Mincs, Cegls and Fefers. Kaczors, Kohns and Szulmirskis. All of them had been murdered and the few others deported from the town of salt, leather and tailors, shoemakers and bakers. From the border town of contraband and smuggling. Of watches, diamonds and silk. From the town of ink. From a town that used to be vibrant. Where Catholics and Jews – Orthodox and Hassidic – lived side by side. Only once in a while someone would pick a fight. In 1931 there were still over 6 thousand Jews living in Mława.

The town used to have a synagogue, at the corner of Kozia and Szewska Streets. Built at the end of the 17th century, it replaced an earlier building that had been pulled down. This newer synagogue, although built in stone, still burnt. In 1939, on the day of Yom Kippur. Allegedly Jews were forced to watch the building burn. Nothing remains of the synagogue, and the plot where it used to stand, after becoming state property, was built over with houses.

There are two Jewish cemeteries in Mława, or rather – what remains of them.

The Old and the New Cemetery. One created before 1884 and one created after this date, just a few hundred meters away. One at Krucza Street, the other at Warszawska Street. Before the war, the New Jewish Cemetery was surrounded by a tall red wall, of which no trace remains today.

The mikveh stood at Narutowicza Street – some claim it was rather at Grzebskiego Street, but the address more likely is Narutowicza. When walking around Mława, you can ask where did Jews live, is there any building that survives. You might be directed to the garden villa at Żwirki Street or to the old wooden house at Dworcowa Street. The Jewish district covered the area from Warszawska Street through Bóżnicza Street and Ostatnia Street up until Kozia and Szewska Streets that were annexed four years later. In 1940, part of the area became the ghetto; initially an open one, later surrounded by a wall and barbed wire. It became home to Jews of Mława, but also those resettled from Rypin, Lidzbark, Lipno and Zieluń. Altogether 5 thousand people, probably even more. The ghetto was liquidated in 1942, and its residents deported to Treblinka and Auschwitz.

After the war, some returned. The last Jew in Mława was Józef Poznański, who died in 1956. 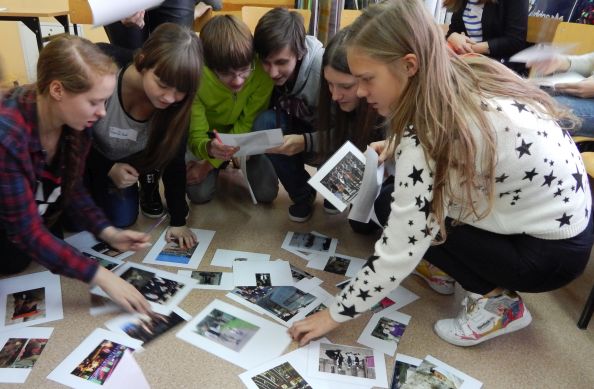 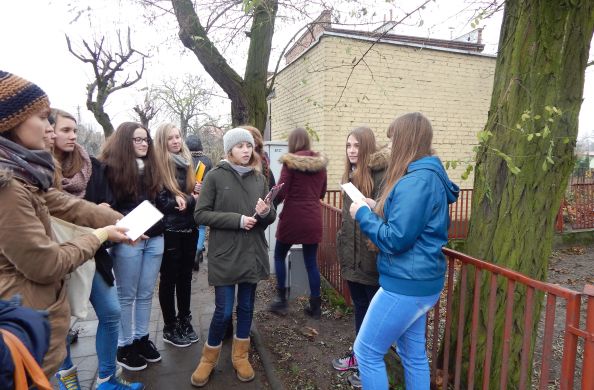 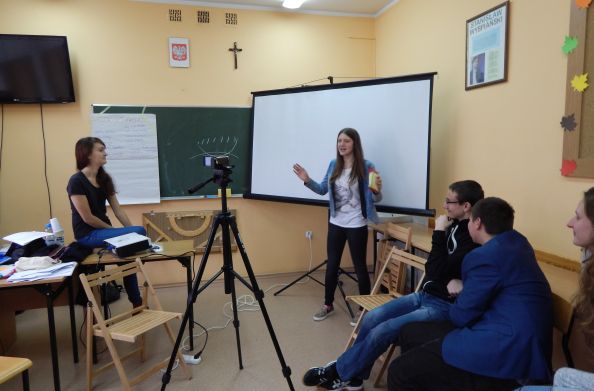 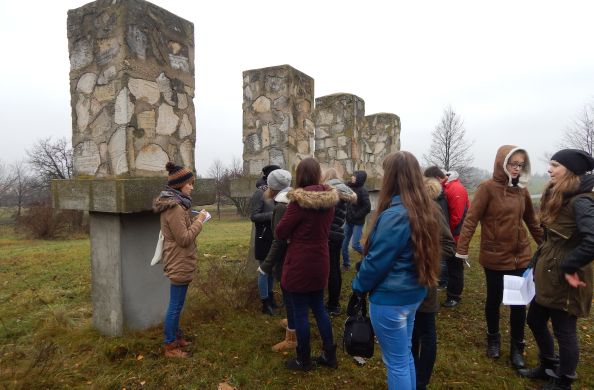 Students came up with a number of interesting initiatives, easy to comprehend but much more difficult to implement. With the help of Forum educators, their assistance and enthusiasm, project participants organized a campaign they called “Absent but Present”. A campaign that was to make Mława residents aware of the town’s Jewish past. This was the purpose of the walking tour, or rather two: one organized for local residents, the other for students of the junior high school. The school’s principal got involved, director of Zawkrzeńska Land Museum was invited to the school to give a presentation and provide assistance the students. And then the tour began. Students had put together maps, historical facts and stories. They had photos, dates, sites and then they were ready – what more would they need? The group was taken to the Jewish cemetery, the new one at Warszawska Street. Then they walked up and down Warszawska Street itself. A Jewish hospital once stood at the intersection with Smolarnia Street. Then at Smolarnia 6 a Jewish boarding junior high  school operated even right before the outbreak of World War II. The school is gone, nothing is left after the building was torn down in 1995. The route included the Old Square where one can still see a prewar Jewish tenement house. Then to Płocka Street, as it led toward the main gate of the ghetto during the war. And also to the site of the location of the old synagogue and then a little further down to the location of the mikveh. Mikveh used water from Serecza, now called Seracza, a river flowing through Mława. Next stop was Zduńska Street, where the building that became headquarters of the Judenrat during the war still stands. First head of the Judenrat was Eliezer Perlmuter, who was later murdered by Germans. The tour’s final stop was in front of a plaque at Grzebskiego Street that commemorates 68 Jewish victims executed there in 1942.

A history lesson dedicated to Jewish Mława was organized for students from one of the grades that could not participate in the walking tour. Then, with the help of a music school, a Jewish music concert followedand a history lesson in one. Local bakers brought challah bread for audience members. And then photo exhibitions organized in the local outpatient clinics: Panakeja and Panaceum. And also in Janusz Dębski’s Gallery 13.

On December 14 was “Find out more” day, with students walking around the town and telling stories; patiently waiting in the cold and encouraging contact: “Hello ma’am, perhaps you’d like to hear a story?” They stood in sites important for Mława’s Jewish past. “Do you know where we are, sir?” They held signs that encouraged passersby to ask questions.It’s hard to say how many people passed them, talked to them or saw the exhibition – a few hundred, maybe even more? The event caused quite a stir, as students turned to the local media for help. They participated in a radio show and had one of the newspapers write an article about their project. They also appeared on local TV. They also ran a website, a blog in English and a Facebook fan page. And then there is also a film, and quite a long one at that. Students visited the local archive, conducted interviews with senior citizens – witnesses of history who remember a very different Mława, Mława from before World War II. They also met with the town’s mayor and connected with two descendants of Mława Jews who had lived in the town for generations before 1939, Rita Benari and Kathleen Lawrence, daughter of Simche Kurtzman. Kathleen Lawrence still uses her Mława family’s silverware for Shabbat…

These workshops are definitely useful and in my opinion should be organized in all Polish schools. Having us engage in games that make us gain new knowledge is much better than just sitting around and listening to some text. Practical knowledge will be remembered better. This is more effective and definitely not a waste of time.

I discovered elements of a new culture, for which I am very grateful to the Forum for Dialogue. The people who came up with the different activities and games knew what they were doing, because I think they can be enjoyed by both young as well as older people.

I hope that most of our fellow students learned to be tolerant towards others; to me ‘other’ means ‘interesting’.