School of Dialogue at Hipolit Cegielski Junior High School No 1

Murowana Goślina is located in the Greater Poland province and has slightly over 10,000 inhabitants. It is one of the oldest settlements in the Greater Poland province. The Jewish community was officially established in 1782, however Jews settled here already at the end of the 17th century. In 1793, 300 Jews lived in Murowana Goślina, constituting one third of the town’s population. They were mainly traders and craftsmen. The Jews of Murowana Goślina occupied the north part of the town, along Żydowska Street (now Rogozińska). Residential buildings stood here, as well as a synagogue and a school supported by the community. The cemetery was located on a hill outside the town. From the 19th century the Jewish community gradually decreased. In 1939, not more than 10 Jews lived in Murowana Goślina. During the World War II, the Germans deported Jews to ghettos in the General Government, then destroyed the synagogue and the cemetery.

The junior high school students demonstrated their independence, enthusiasm and willingness to act already at the first workshop. They systematically deepened their knowledge. When preparing for the project, the youth met many people. They received a lot of information and help from Alicja Kobus, a resident of Murowana Goślina and the head of the branch of Jewish Community in Poznań.

The students also talked with the descendents of Jews from Murowana Goślina, who came to visit the town of their ancestors. They received letters and photos from Yaira from Haifa, whereas Judith Wimborne did the voiceover to a film presenting her family history. Dariusz Paprocki, a local historian, also shared with the youth his knowledge about the Jewish history of the town.

One day before the final walking tour, the students carried out workshops about Jewish history and tradition for their peers from another grade. The students wrote their names in Hebrew, learned the most important dates and terms for Jews, and solved a quiz. At the end they could taste apples with honey prepared by the organizers.

On December 17, the invited guests (junior high students and their parents) took part in a location-based game. The guides started by explaining the rules of the game and presenting its theme. The route included five stops connected to the history of Jews of Murowana Goślina. First, the participants went to the intersection of Młyńska and Rogozińska streets as the Jewish inhabitants lived mainly in this area. The house of the Jewish clockmaker, Szmul Glaser, was located here. 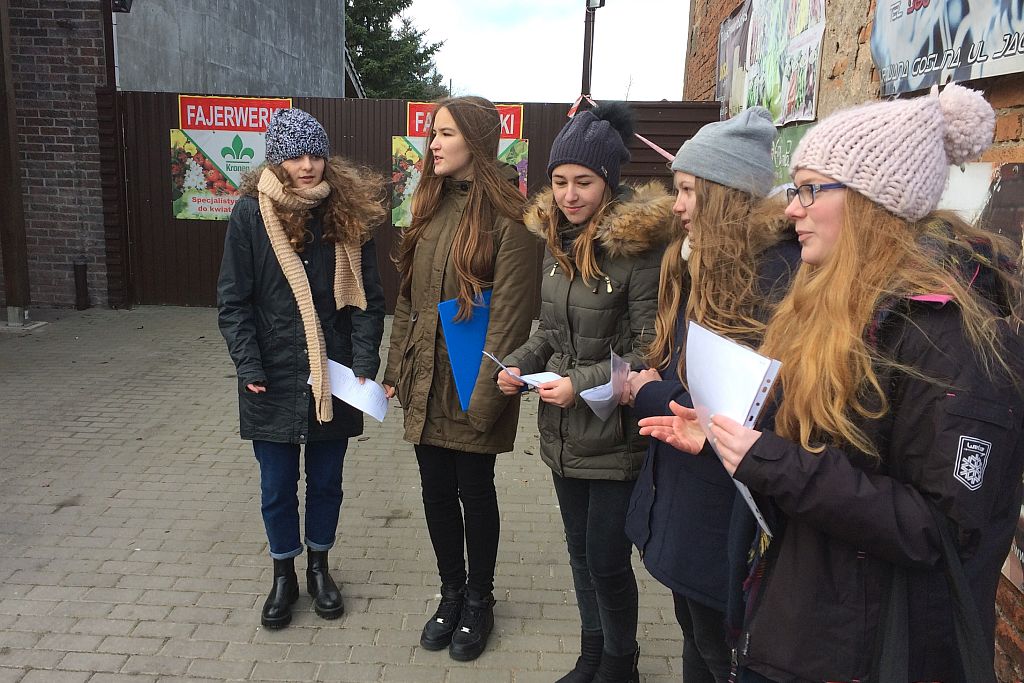 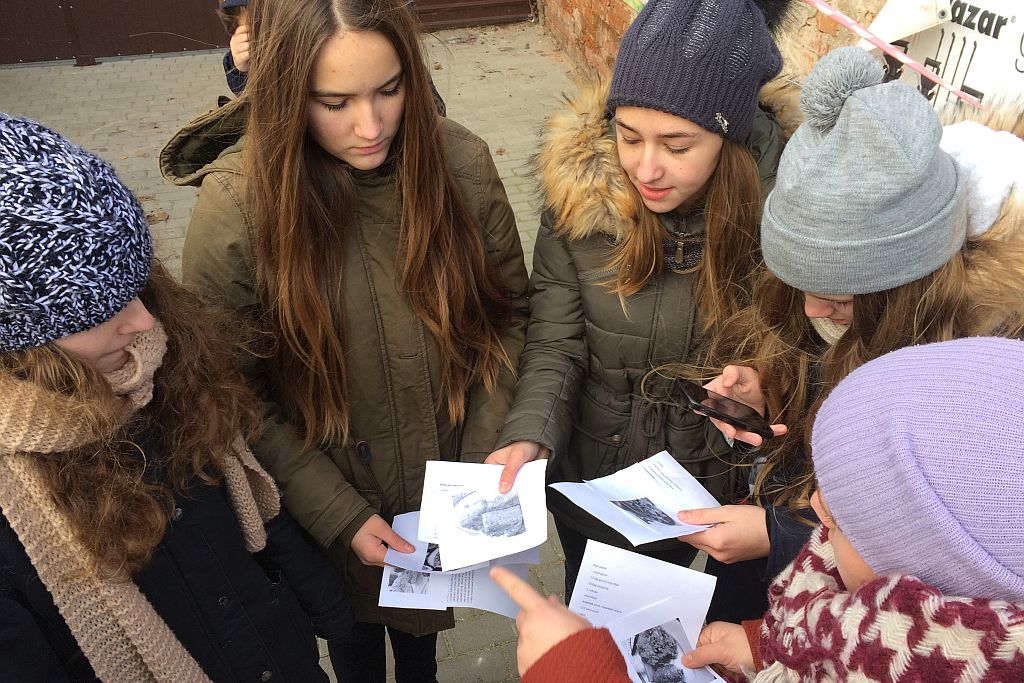 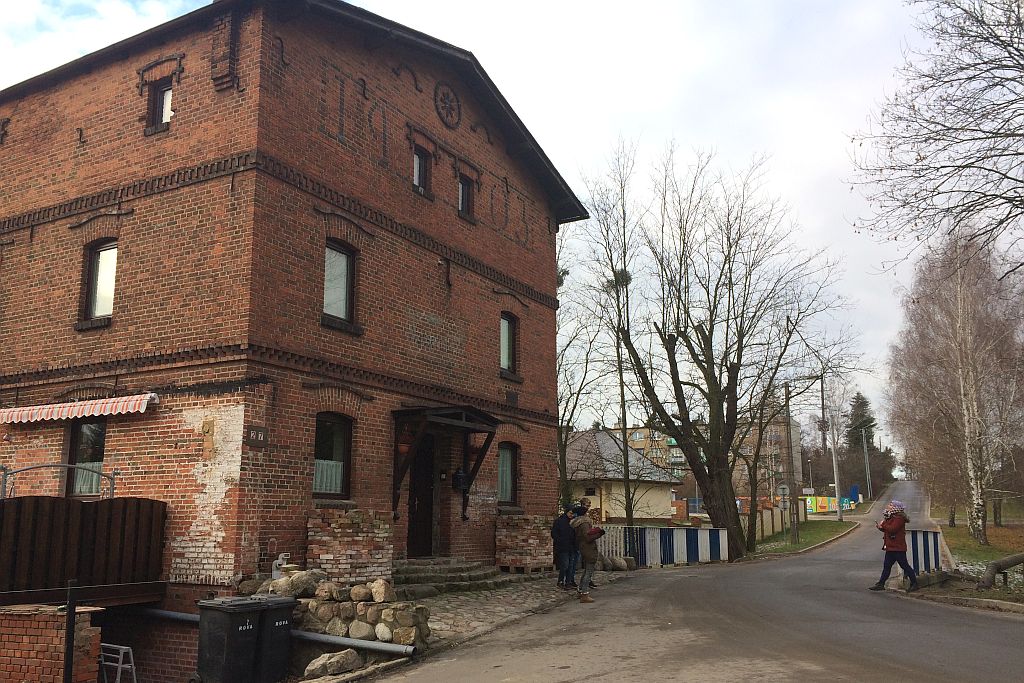 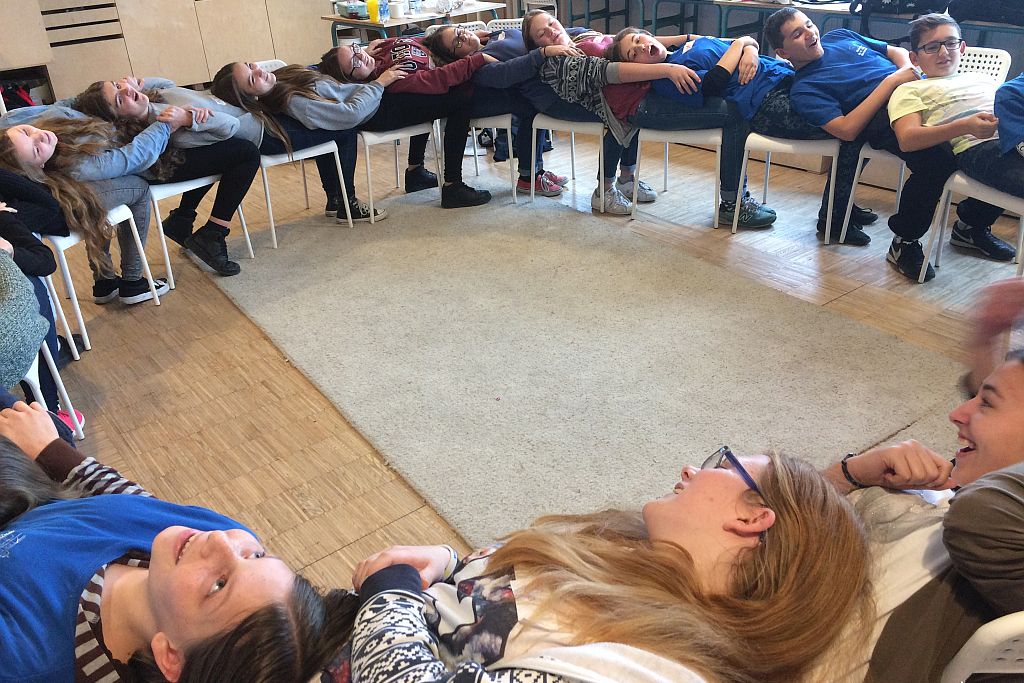 The participants had a task to convert several dates (taken from an article from Dziennik Narodowy dating back to 1847) to the Jewish calendar. On the way from one stop to another, the students would outline traces of their feet on the pavement. In this symbolic way they showed the routes that the pre-war Jewish community was walking.

The next stop was the restaurant and the hotel of Alfons Cohn. The guides told the story about the multi-generational family that lived here. They also treated the participants with hamantash. While enjoying the snack, the participants were trying to guess the ingredients it was made of. They also tried to come up with a dish that could be served in the restaurant. There was also a crossword and matching photos with Jewish dishes. At the spot where the synagogue used to stand, they all listened about its history, and then learned the Hebrew alphabet. Everyone could try to write his or her name in Hebrew. The participants also had a task to imagine what the house of prayer in Murowana Goślina looked like. A public school was located nearby. Jews, Germans and Poles went to this school before the World War II. The students talked about the history of this place and asked participants to note terms referring to school, both in Hebrew and German.

Next, they all went by the house of Juliusz Markowicz, the wealthiest Jew of Murowana Goślina. Here, the participants solved a quiz and cut a cardboard figure of Siddy, the youngest daughter of Juliusz Markowicz. The cemetery was the last stop of the tour. The participants began discovering the history of it by solving a puzzle representing the photo of it. The guides also talked about the symbols present on the monuments – a porcelain dove made by Polish and Israeli youth and a sculpture titled A Message To Heaven. The participants were given cards on which they could write their messages. The tour concluded with a meeting over coffee, tea and cake. The students also prepared bags, made a model of the synagogue in Murowana Goślina, and baked chulent as part of the project.

The students’ final report included a movie. The students regularly reported on their action on their Facebook profile Murowana Wielokulturowość.

The workshops showed us how to avoid stereotypes.

Tolerance is important. I learned not to judge a book by its cover.