School of Dialogue at School Complex in Nowy Żmigród

Spring School of Dialogue workshops in Nowy Żmigród allowed students to discover their village’s Jewish past. In the course of the sessions, students learned about history they knew virtually nothing about.

Nowy Żmigród is a large village in Podkarpacie area. Jews began to settle there around 16th century, when the village became property of Stadnicki family; they were attracted by the nearby trade route connecting Hungary and the Polish Crown. At the time, Jews were mostly trading wine, horses, grain and timber. They were tailors and milliners, they owned mills and taverns. Very quickly a Kahal was established; it is certain that a synagogue was built in 1606 and in all likelihood, the cemetery was opened in that same year. Documents state that by 1676 there were 33 Jewish families living in Nowy Żmigród; in early 18th century, another synagogue was erected. Jewish residents included merchants, jewelers, butchers, teachers as well as a rabbi, cantor and a musician. Over time, Jewish schools started to crop up.

Despite a large wave of Jewish migration to nearby Gorlice and Jasło, in 1870 the local Kehilla had 707 members in 1870 and by 1900, Jews comprised 56.1% of the local population. Many of them were Hassidim, followers of the tsaddik from Sącz. Sinaj Halberstam became the tsaddik of Nowy Żmigród in 1907; he died in the course of World War II in Siberia (the dynasty was continued in Israel by his son Aron).

In 1938, in the Jasło county parishes lived 6284 Jews, 1460 of whom lived in Nowy Żmigród itself. A Jewish library and reading hall, as well as political parties and youth organizations such as Mizrahi, Techiya, Akiba and Hanoar Hazioni, all existed in the village.

The German army entered Nowy Żmigród in September 1939, registered all local Jews and thwarted activities of all Jewish associations. In the spring of 1940, Gestapo and German military police executed 150 Jews in the village, who were later buried in a mass grave at the local Jewish cemetery. In 1941, 800 local Jews were locked inside the German-created ghetto. The ghetto also became home for Jews from Osieka, Krempna and a group deported from Krosno. In early 1942, Gestapo began holding executions at the Jewish cemetery. On July 7, 1942, in the course of liquidation of Nowy Żmigród ghetto that ultimately had 2800 residents, 1257 Jews were muredered in Hałbów (among them rabbi Aron Halberstam) and another 40 at the local Jewish cemetery. One week later, over 500 people were sent to Płaszów camp and on August 15, another 150 people were deported to the camp in Zasław. In the fall of 1942, those remaining in the ghetto were taken to Bełżec death camp.

The issue of diversity and who the term “Jew” can applied to stirred the greatest interest among students. What is contemporary Jewish identity like in Poland as compared to that in the United States and Israel? 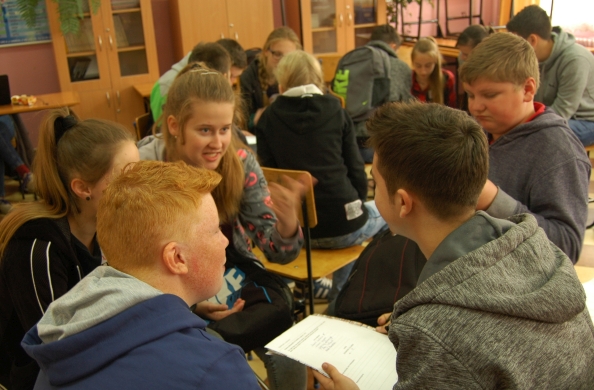 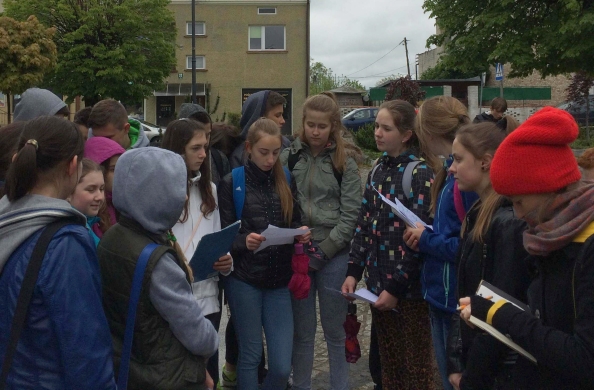 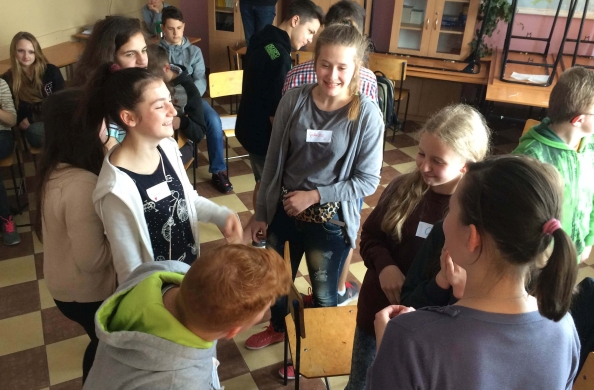 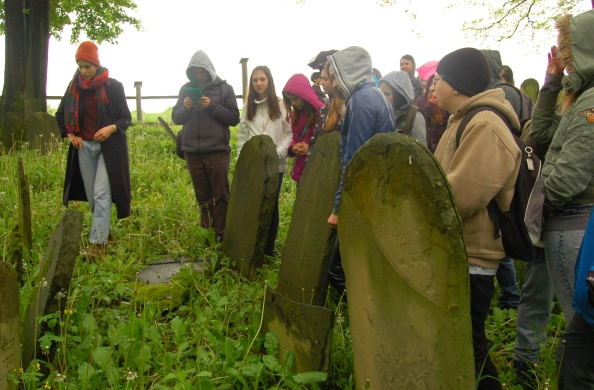 In the course of preparations for a walking tour organized for other students from their school, School of Dialogue participants tried to reconstruct the townscape of prewar Nowy Żmigród. They searched for information online, looked in the library, asked local historians. They wandered around, visited Hałbów, took a stroll through the Jewish cemetery and approached senior residents, trying to uncover memories of Jewish owners of market square stores and workshops.

In the course of their walking tour in June, students took their guests to sites important for the local Jewish community. Among these places was the adress of the former cheder. There, apart from explaining what a cheder was, one of the female students talked about bar mitzvah as well. Another girl pointed out the site of the wall which is considered to be an element of foundation of the synagogue. The story of this synagogue was told by yet another student at Basztowa Street, right by Plac Zamkowy (Castle Square), on the site of the former synagogue; what a synagogue was, what kind of ceremonies were held there, what is the synagogue’s importance in contemporary Judaism. Currently there are no traces left of the synagogue, which dated back to early 17th century and was destroyed in 1944. Similarly, nothing is left of the beit ha-midrash that stood right next to it.

Next, the group headed to the Jewish cemetery, where tour organizers gave the group an overview of its history as well as of Jewish burial rituals. The undamaged and well-maintained cemetery is located a few hundred meters from the market square and offers vistas of the nearby hills.

Well-preserved headstones stand between the trees. Students explained the significance of a cemetery to the Jews, how the sites and the tombstones are treated, who is buried where and according to which hierarchy and why are stones left on graves; as well as what do images of a book or a broken candle signify.

At the market square, female students described the style of dress of local Jews before the war, what language they used, what were their ties to non-Jews and what kind of professions they represented and which shops they ran. One student introduced the group to doctor Mendel, who lived in a house at 16 Mickiewicza Street, right across from the high school. Then student organizers told their guests about Jewish holidays such as Shabbat, Yom Kippur, Chanukah and Purim.  When talking about Jewish cuisine and the differences as compared to Polish cuisine, students explained rules of kosher and ritual slaughter. They also offered a taste of faworki cookies, apples and honey. They described the market square and its architecture before the war and even mentioned the type of stone used to pave the road.

At the very end, students led their guests to a plaque commemorating the massacre of Jews in Hałbów. The site is well-maintained, with commemorative celebrations being held each July in honor of the victims of the execution. Here, one of the students explained whose death is commemorated in this place.

It is good to know that the older generation would meet with Jews on everyday basis, knew important Jewish sites, their style of dress and attitudes. Our small town and its surrounding area once looked completely different. The conducted workshops helped us return to those times at least for a tille while.

These workshops offered a lot to think about, now I see Jews as our compatriots.

During the workshops we had a chance to get acquainted with their everyday life. We learned many new things and I changed my attitudes towards the Jews.

We would very much like the workshops led by Forum for Dialogue Foundation to be held in our school on a regular basis. As one of School of Dialogue participants, I invite everyone to discover the mysteries of our region’s history for themselves.