School of Dialogue at Polish Olympians Junior High School No. 1

Oława, first mentioned in historical sources dating back to 1149, had been the property of Silesian Piasts for nearly 500 years. It was during the Piast reign, in mid-14th century, that the presence of Jews among the town’s population was noted for the first time. They were two women – Rachela and Gołda. There are, however, no sources pointing to any permanent settlement of the Jewish population – the oldest documents confirming the existence of an organised Jewish community in Oława did not appear until 400 years later. The community experienced greatest development in the 19th century, when it consisted primarily of Jewish settlers from nearby localities. Jews of Oława were tradesmen, worked in the municipal mint, pursued liberal professions or were involved in the local industry. In the 1830s, the merchant Wilhelm Freudenthal was the first Jew to join the Town Council. As the years passed, however, the community started to shrink in size due to considerable emigration to Berlin and North America. One of the traces of the local Jewish history in today’s Oława is the building located at 6 Piastów Street, which was used as a prayer hall until 1933.

The students of the Polish Olympians Lower Secondary School No. 1 in Oława who attended the 2017 edition of the School of Dialogue were surprised by the very fact that Jews had actually once lived in the town. During the workshop, the tutors helped the students gain basic knowledge of Jewish history and culture. Equipped with a new set of skills, the pupils started to work on their project.

They decided to work in two groups, each focusing on a different project, one of them being the Jewish Culture Day and the other – a walking tour entitled “Following the Traces of Oława Jews”.

The students picked all places to be visited during the tour and researched their histories. They also wrote all necessary texts and cooperated with the Town Hall’s Museum Room, which stores numerous objects connected to the Jewish community of Oława. Many resources and pieces of information useful for the purposes of the project were found in the letters and memoirs of Mrs. Ilse Schenkheim, nee Osiecka, who was born in Oława in 1926 and who currently lives in the United States. The students presented the stories of Ilse’s parents, grandparents, friends, and siblings, and the places where these stories took place. They also showed the graves of some of the people in question at the local Jewish cemetery. The students became a mouthpiece through which Ilse could tell her story of the close relations between Jews and Christians, the assimilated and the radically religious families, the people who set out to Palestine to build a Jewish state, as well as about the war-time and post-war migration of Oława Jews to the United States. Thanks to the fascinating stories of Mrs. Schenkheim the pupils had the opportunity to discover the history of their town seen through the eyes of the members of a Jewish family living in pre-war Oława. 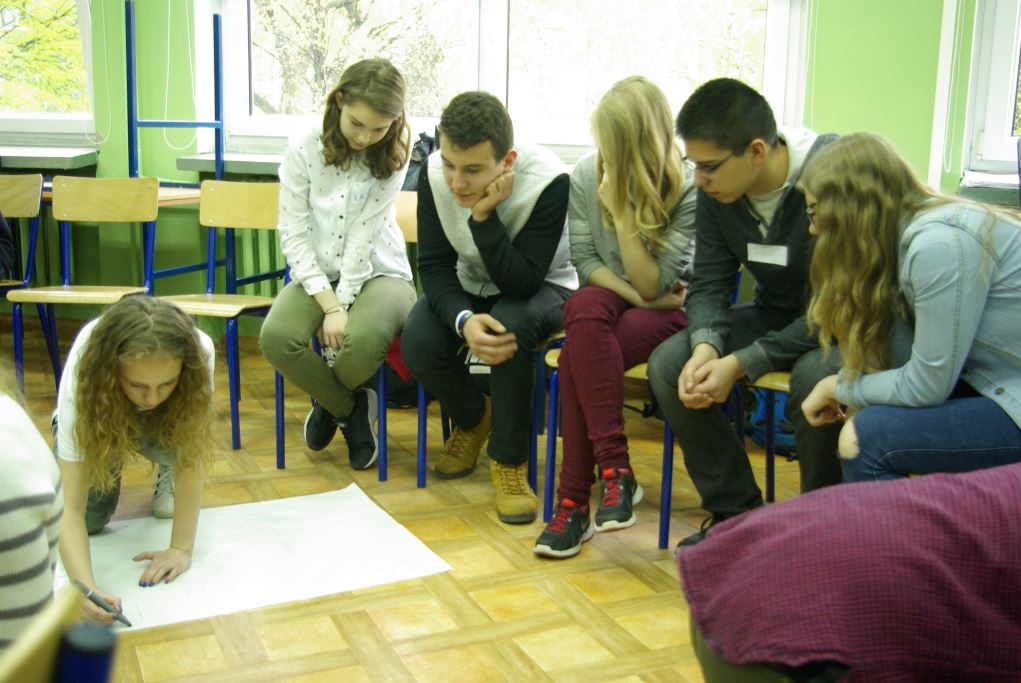 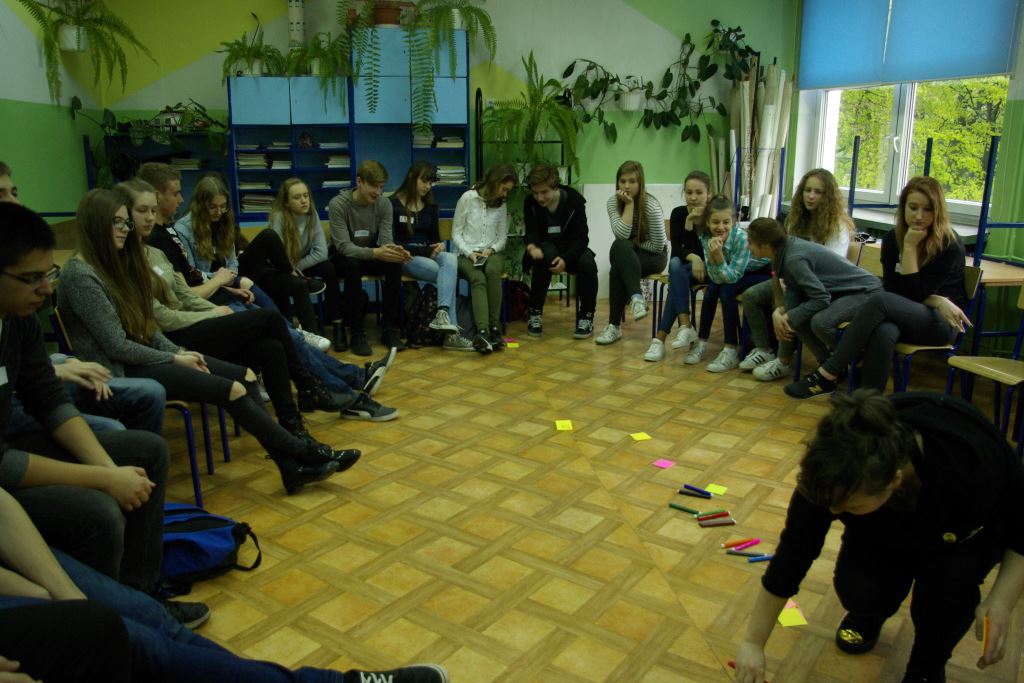 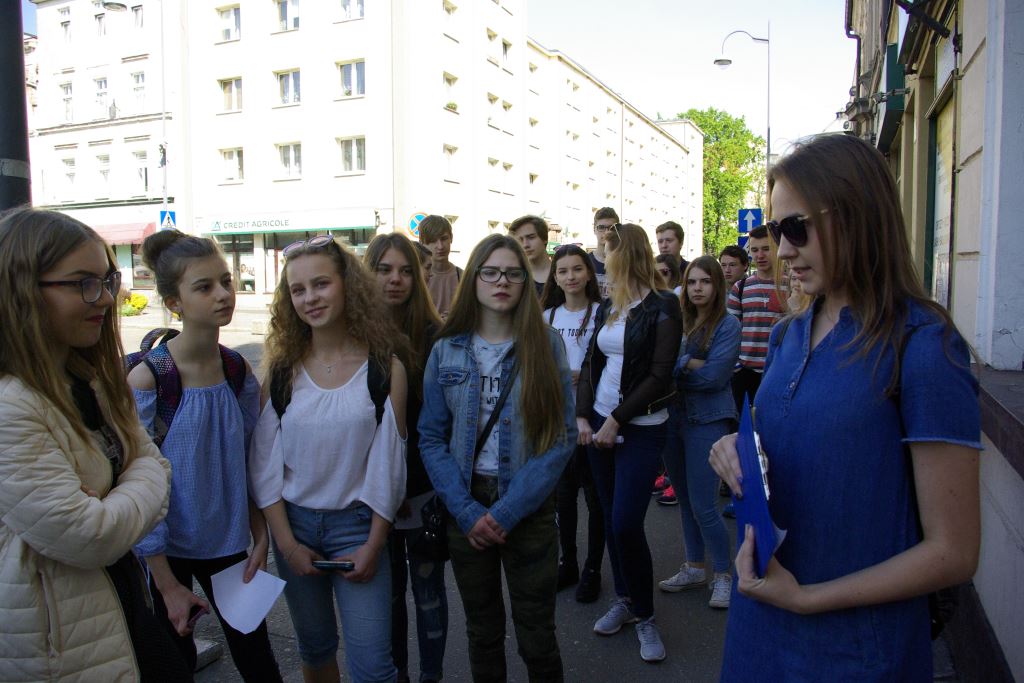 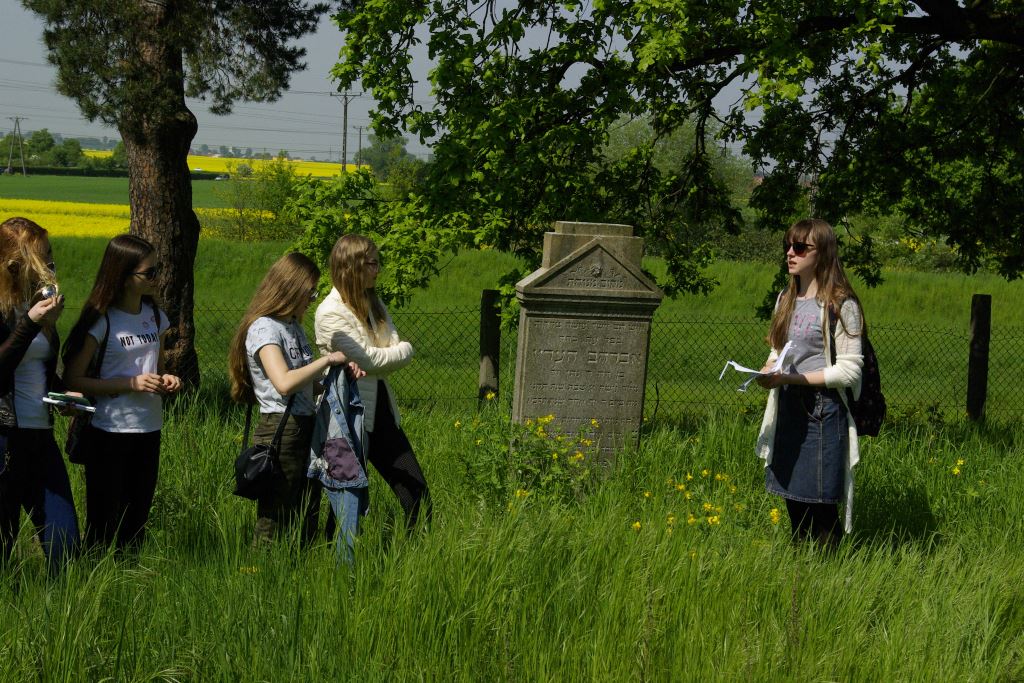 A day before the planned tour the students organised a Jewish Culture Day for all the pupils attending their school. The participants of the School of Dialogue prepared a number of thematic stands in their classroom, allowing for each person coming in to learn something interesting about Jewish culture, religion, and customs, as well as see the reality of Jewish life in pre-war Poland and in modern-day Israel.

The tour was organised in the form of a walk, with the students serving as guides. The route encompassed such sites as the building of the former house of prayer, the market square with many pre-war buildings which used to be the seats of Jewish enterprises, as well as the Jewish cemetery on a small hill, where around a dozen matzevot have been preserved. Among the participants of the walk were many adults, including the representatives of the Town Hall, teachers, parents, journalists, and third-year lower secondary and high school students.

Most of those who took part in the walk were surprised by the richness of Oława’s Jewish history, with Ilse Schenkheim’s stories making perhaps the greatest impression.

Thanks to their dedication and curiosity, the pupils from Oława created a project raising awareness of the history of the local Jewish community among the town’s inhabitants. Their participation in the programme had a strong impact, not only on the people around them, but also on the students themselves. As stated by one of the participants of the School of Dialogue from Oława, “I had no idea that there were so many Jewish heritage sites in my town. Sometimes I would pass these building without a second thought. Now my perception has totally shifted and when I look at them, I think of the Jews who lived and worked there”.

I had no idea that there were so many Jewish heritage sites in my town. Sometimes I would pass these building without a second thought. Now my perception has totally shifted and when I look at them, I think of the Jews who lived and worked there.