In 1939 Jews constituted 49% of town’s population. They came here in the 15th or 16th century. In the Jewish district, north from the market square, behind the town’s walls, they had a synagogue, they were given a land to establish a cemetery there. Later, a mikveh and a home for those in need. In the ’20, they had 27 houses of prayers. They were all in the area of Bożnicza, Brzeska, Żabia, Końskiego Rynku, Kościelna, Kolejowa and Warszawska Streets. Jewish bakers, Jewish potters and Jewish shoemakers. Coppersmiths, tailors and capmakers. They made mead and butchered cattle. They had an Agudat, very popular among the Hassidic Jews, supported by the members of Bund. He-Chaluc and Ha-Szomer ha-Cair were preparing young people to settle in Palestine.

On October 5, Germans entered Parczew. They forced Jews to work, confiscated their possessions. The first execution took place in November, two others were in February. On March 1941, Germans set up a ghetto in the area of Szeroka and Bożnicza Streets. Jews from the areas of Parczew, Kock, Czemiernik, Wohynia, Cracow and Lublin were put there. 7 000 people in total. At the end of August 1942 the ghetto was liquidated, around 100 Jews were shot on the spot, and others transported directly to Treblinka or the ghetto in Międzyrzec Podlaski.

After the war around 200 Jews lived in Parczew but most of them left after a pogrom organized by partizans on 1946 (3 people were murdered, Jewish shops vandalized)

Students from high school in Parczew knew the Jewish history of their town. They knew that the large building, now a clothing store, was once a synagogue. They were aware of the fact that in the place where the park is, there used to be a Jewish cemetery. During workshops led by School of Dialogue leaders, Aneta Kulińska and Monika Oszmaniec, they talked about it, about the situation that no one knows how to resolve. They learned new terms, history facts about their town. While preparing the walking tour, they deepened their knowledge. They read books, searched for information on-line. They met with Juliusz Bzówka, local historian, who told them about the town, what was here and what happened here. They asked their parents and grandparents about it. They contacted Agata Zapasa, a high school graduate, now a PhD student at Maria Curie-Skłodowska University in Lublin, who studies the history of Jews from Parczew. 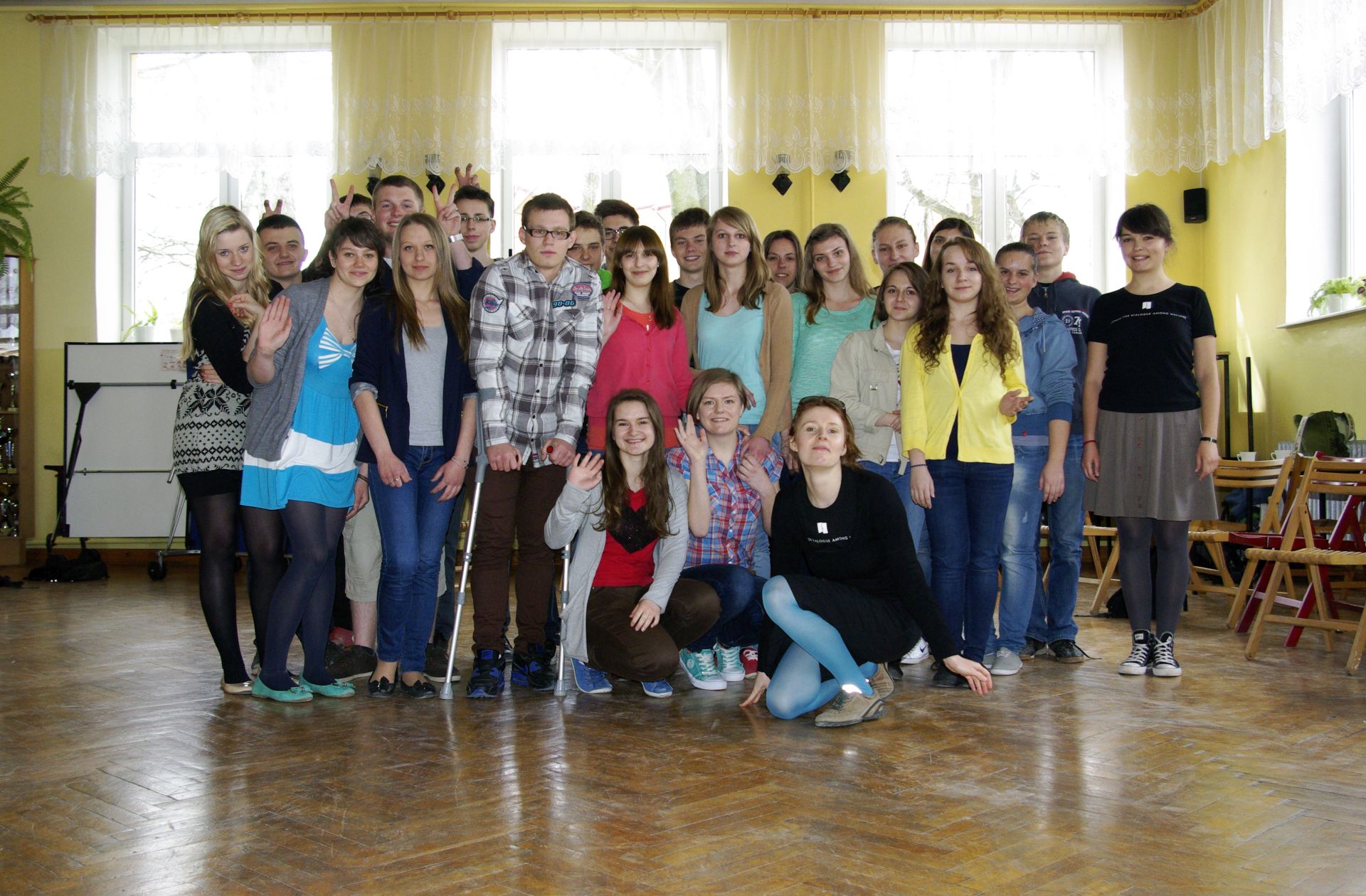 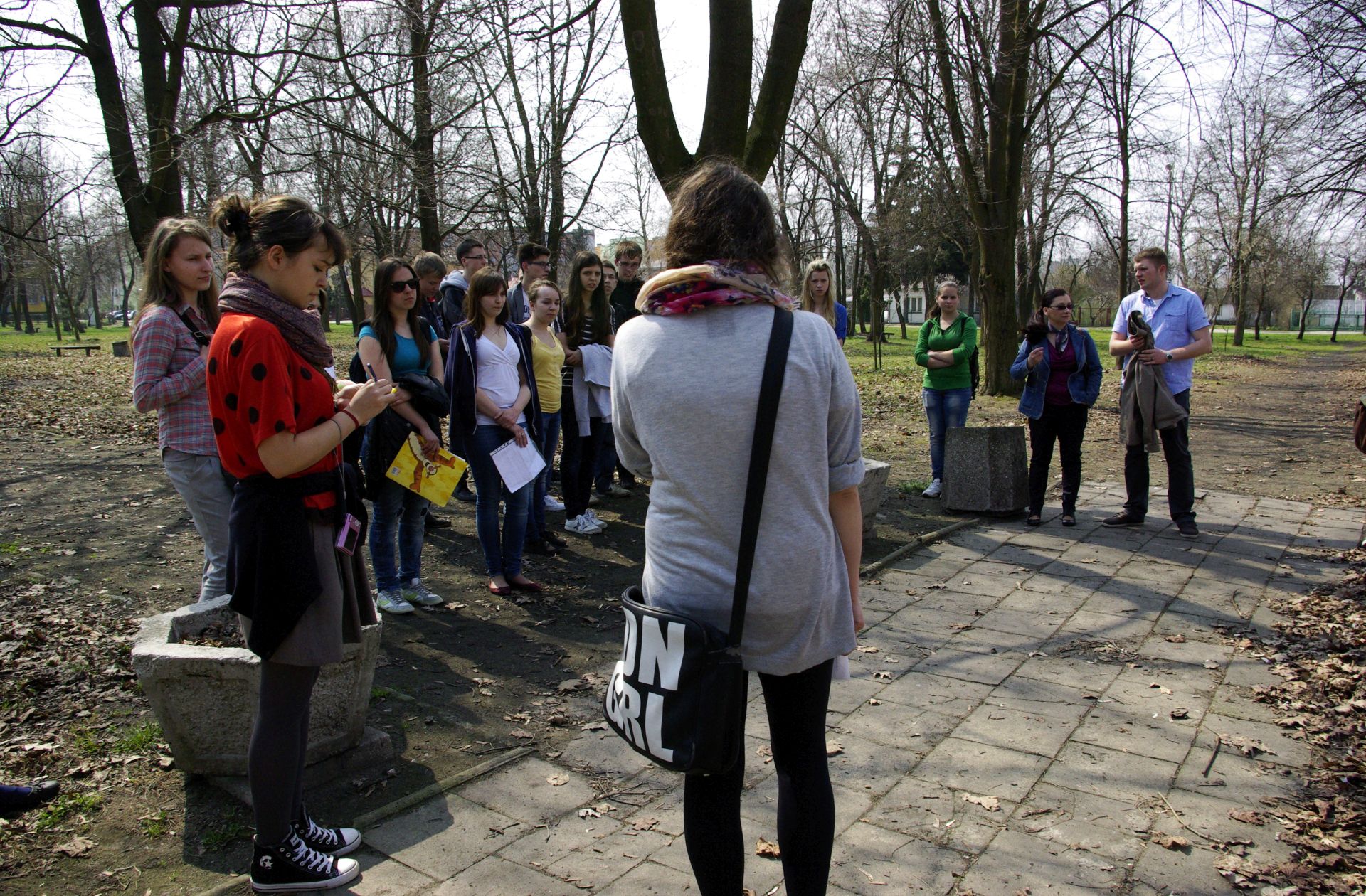 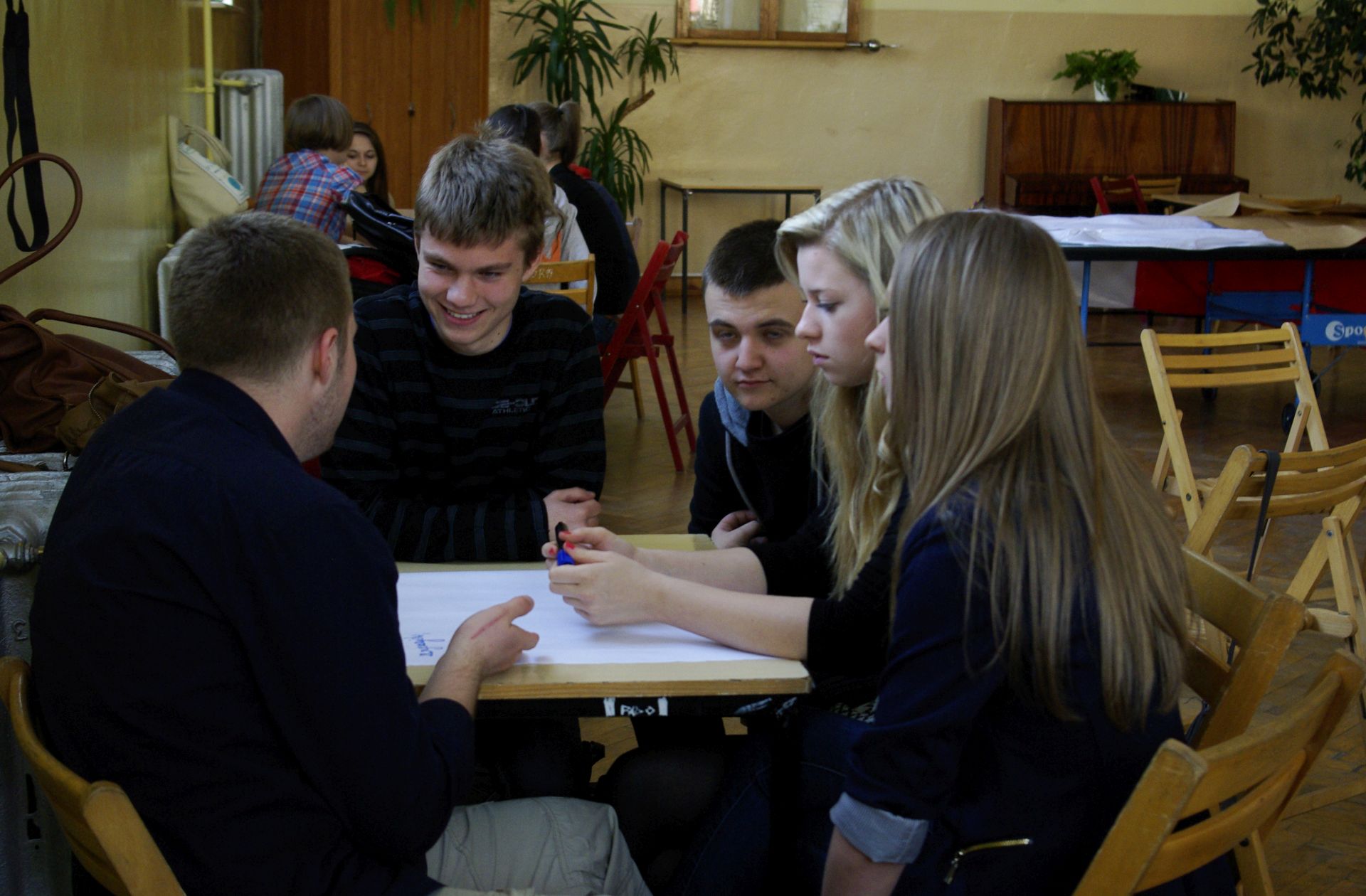 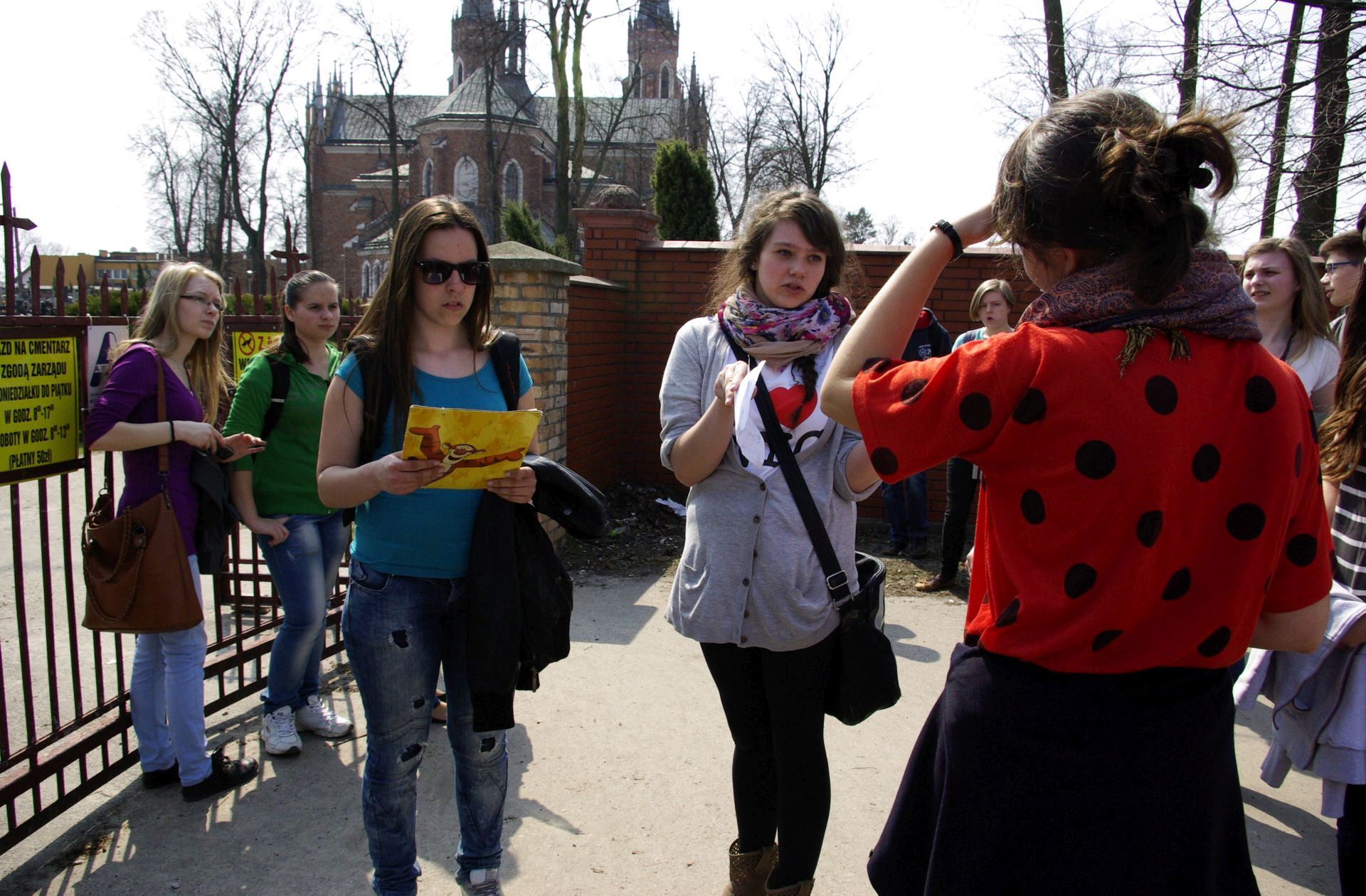 She helped the students during preparations, gave them some information, explained things that were not clear. The town’s mayor and the region authorities, as well as the representatives of local government, school principals, teachers and fellow high school students, all took part in a walking tour organized by the youth.
“A walking tour around Jewish Parczew” had several stops. The first one was at the market square where the participants could see an exhibition of pre-war photos of Parczew and the former market. Students told the history of that place, what it looked like. They showed a presentation, and a short film about the ghetto in Parczew. Some bystanders joined them, asked what it was all about. They were interested, told their own stories. Mr. Tomasz Tyszkiewicz was the first one to speak. He was born in 1926 in Parczew and remembered the war and the Holocaust. On the site of the former market, students described what the stands looked like, what was displayed on them, how air smelled like back then. They said how many Jews were here, how they contributed to Parczew, how they developed it and changed it. Then, the synagogue of course and the cemetery that the students had cleaned up before.

They went to the place where the Orthodox church used to stand. On the way, they told anecdotes from a book “Przy szabasowych świecach” (By the Sabbath Candles) and interesting stories about the town’s past. Who lived where and what their occupation was. They passed by the former Gestapo seat and the house of Mr. Golecki, a Righteous from Parczew, who hid Jews during the war. Students tried to present the subject from a multicultural perspective, that is why they took the group to the Catholic church and later went to the Catholic cemetery. They talked about the similarities and differences, about the common history and different fate. They put candles by the monument commemorating the victims of World War II at the Catholic cemetery. The mayor, Paweł Kędracki, lit the candle.
At the end, they organized a quiz for the participants to verify what they learned from them. They offered matzoh that they had prepared themselves. Challach and donuts sparkled with powder. Lublin TV was filming everything.
These young people did not invite the local authorities without a reason. Without a plan or because they ought to. They invited them to express their hope that together they will commemorate Jews of Parczew.

These workshops motivated me to act, I want to change views of my friends, I want them to know how strongly our ancestors were connected to the Jewish culture.

These workshops provided me with knowledge about people who lived next to us for centuries and our coexistence will continue.

If these workshops hadn’t been organized, I would have never become interested in the history of the place where I live and which was so connected to Jews. (…) These workshops encouraged us and prepared to pursue research and in fact motivated us to act.

I realized that I walk by these buildings or other places that were and still are important for Jews but I have not always treated them with respect. Now I know how many places here are strongly connected with the Jewish culture what we forget about.

We all think to know who the Jewish people are. We know that our Catholic religion and Judaism are both similar and different. We are monotheistic, we have the same prophets. But what else? How many of us, Christians, know that mikveh is the ritual bathhouse, that menora is a seven branched candelabra or how many days Sabbath lasts.