School of Dialogue at John Paul II School Complex No 1

Przysucha, a small town west of Radom, nearby Radomka river and lush green forests, is the hometown of ethnomusicologist Oskar Kolberg and tzaddik Yaakov Yitzhak Rabinowitz – also known as “the Holy Jew”, disciple of Izaak Horowitz (Seer of Lublin) and David Biderman from Lelów. Rabinowitz made Przysucha an important center of Hassidism. “It is not difficult to perform miracles, but to be Jewish is the real difficulty” he claimed. Rabinowitz died in 1814 and was buried in Przysucha’s Jewish cemetery.

Jews came to settle in the town in 1713 and stayed. Apart from Jews, Przysucha was also home to Germans and Poles. Each group lived in a different district. Over time, craftsmanship and trade developed, the Jewish community grew and by the end of the 19th century Jews made up 75% of the local population. Political life blossomed, trade unions and organizations were formed, and so was the local Bund. On the eve of World War II, Przysucha was inhabited by around 2,500 Jews. On September 8, 1939, Germans entered the town and in 1942 locked Jews from Przysucha and surrounding villages in a ghetto. Altogether 4,000 people. The ghetto was liquidated in the summer of 1942, with Germans murdering members of the Jewish police and Judenrat and deporting everyone else from the ghetto to Treblinka. All in the course of a few days between October 27 and October 31, 1942.
A defunct synagogue still stands on Żeromskiego Square.

Once derelict and slowly caving in under the weight of its own roof, now the building is slowly undergoing renovation led by the Foundation for the Preservation of Jewish Heritage in Poland. Inside you can still see floral and animal motifs, polichromies, frescoes and Hebrew inscriptions. The stone Aron ha-Kodesh is still in place, its columns held up by griffins. The Jewish cemetery from 1745 is still located at Cmentarna Street, with around 20 matzevot remaining, albeit devastated. Some of them have been used to construct cowshed walls, others were used for paving someone’s yard. Many headstones can be found in the wall of the present-day fire station. The inscriptions are still visible. Seemingly an ordinary wall, but not quite. In 1987, the Nissenbaum Family Foundation erected two ohels on the grounds of the cemetery for those who should have them: Abraham from Przysucha, who died in 1806 and was one of the first propagators of Hassidism on Polish territories, and a double ohel for the tzaddikim of the Przysucha Hassidic movement.
Participants of the School of Dialogue project prepared for their walking tour by gathering information through reading, walking around and asking. They read historical monographies, visited the local museum, interviewed people who might still remember something. People like Ms. Maria Pyrka, who told the students about the location of a prewar Jewish bakery and a pond that no longer exists. Students also learned about Fejga Kagan, a Jewish dentist in prewar Przysucha. 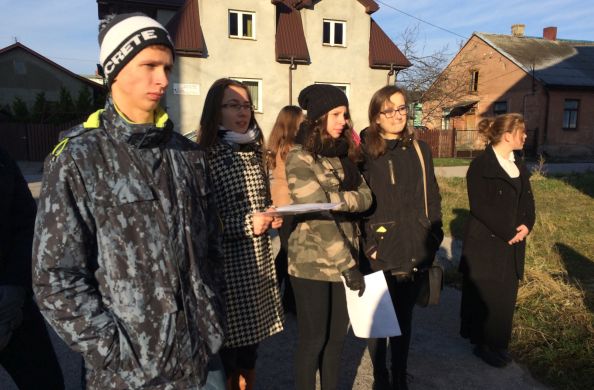 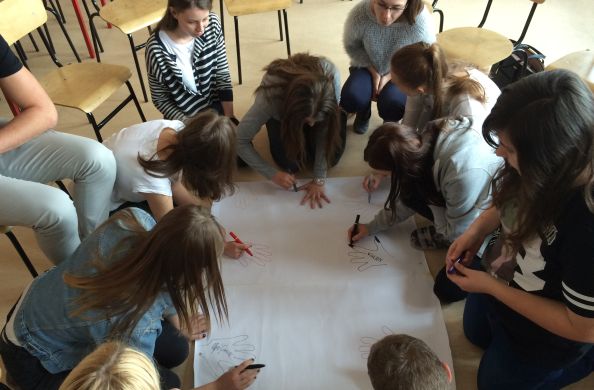 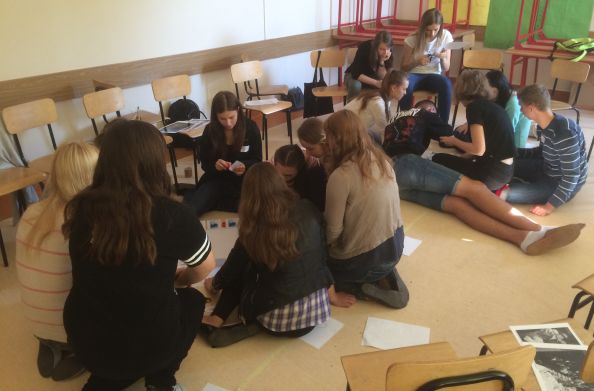 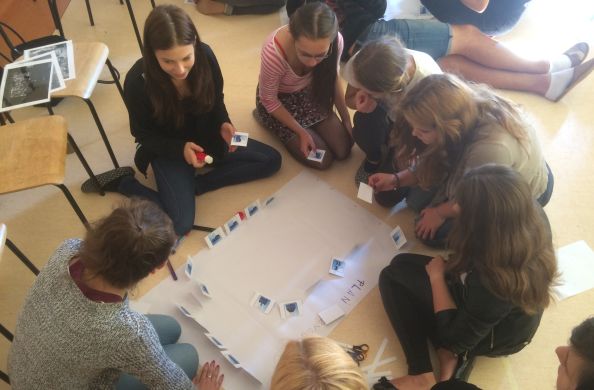 The group met with their tour’s participants at Oskar Kolberg Square, which used to be the Jewish marketplace. School principal Ms. Zofia Szymańska and vice-principal Ms. Elżbieta Karkoszka; high school students from the freshman year, some teachers and retired school employees, students’ parents and grandparents – altogether 50 people. Only at the square did the group learn who will be leading the tour – that it would be Yaakov Yitzhak Rabinowitz and the aforementioned Fejga Kagan. Students explained the rationale behind their project, why they want to overcome stereotypes and recall history; that this is their town’s history and therefore also their own. They gave an overview of the history of Przysucha’s Jews as well as the history of the marketplace where everyone stood.

At the square that now bears the name of Oskar Kolberg, students pointed out an indentation left by a mezuzah on one of the nearby houses, explaining what mezuzahs are and where to find them. At the building of a former mikveh at Radomska Street, number 4, students explained what a mikveh is, how it looks and how it is used, as well as who should go there and why. The young guides also told their group about a pond that used to be located nearby, but has since dried up.

At Warszawska Street number 29, the students explained that this was the location of the gate leading into Przysucha’s ghetto. They described what the ghetto life was like, who was locked inside and how many ghetto residents there were; they described the ghetto’s liquidation, transports to Treblinka and stated the fact that in all likelihood, no-one had ever come back. At the Jewish cemetery they recounted the site’s history and the reason for all the stones laying there. They explained what happened to the matzevot and why those still there look the way they do. The tour ended at Żeromskiego Square, next to the building of the former synagogue. Tour organizers told the group about the building’s history, pointed out characteristic elements of a synagogue and explained their meaning. They also elaborated on the terms such as Hassidism, tzaddik and mysticism. Finally, they treated their guests to Hamantashen cookies and arranged a group photo.
Students also prepared a brochure about Jewish Przysucha that will be available in the local museum. They also organized an exhibition that will be on display in their school – it documents their School of Dialogue project work, but also presents photos and descriptions connected with their town’s Jewish past.

I learned a tons of fascinating new things and most importantly – I gained a new perspective on the world.

I’m a proud Przysucha resident, who is happy that it was my town were Jewish history happened and Hassidism developed.

These workshops have changed me and I am proud that it was me with a few other people who decided to learn about Jewish history of Przysucha.

School of Dialogue program in Przysucha was made possible by the support from RALPH STERN.