School of Dialogue at Eugeniusz Romer High School No 1

Some people say that Jews arrived in Rabka as late as in the second half of the 19th century, but in 1829 there must have been six Jews living there, and most probably they were a family. They say that they actually lived there and were baptized. Anna Magdalena Goldberger, just to mention. Other documents covering a timeframe after that date provide for the information concerning some other baptisms. Laja, Pesiel, Chaja, Herman and others.

Some other documents contain information about the mangle, dye works and the inn. The Jews arrived in bigger numbers, with their population to reach some 270 people at the end of the 19th century.

The Jews run some of guest houses, Tybinger had a ritual slaughterhouse, and Freundlich operated beer bottling works. They included also merchants, craftsmen, some other ran an inn. They baked bread, operated fabric shops.

In 1939, some of the Jews left, and some arrived, hoping that they could live a safe and secure life in the town. By the end of 1941, 880 people arrived, mainly from Cracow and nearby areas.

The labour camp was established in the today’s Poniatowskiego Street. It was 15 August 1942. Then, later on also in August this year, 200 people were moved to labour camps, and some Jews were transported to Bełzec.

On 1 September 1943, where the camp was liquidated, some of the Jews who still stayed in Rabka were executed by firing squad, and some of them were transported to the camp in Płaszów.

Due to support and involvement of trainers from the School of Dialogue, during their walking tour organised for the town citizens, the students of the high school presented the history of Jews who once lived in Rabka. 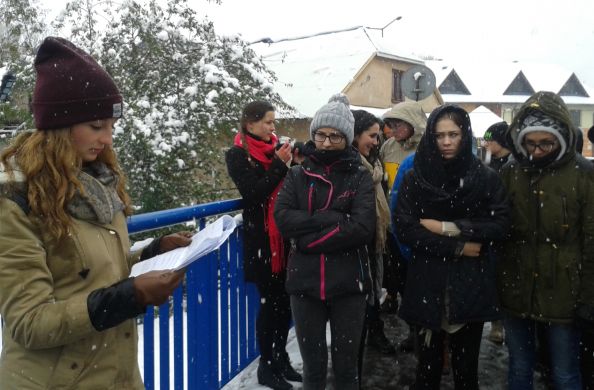 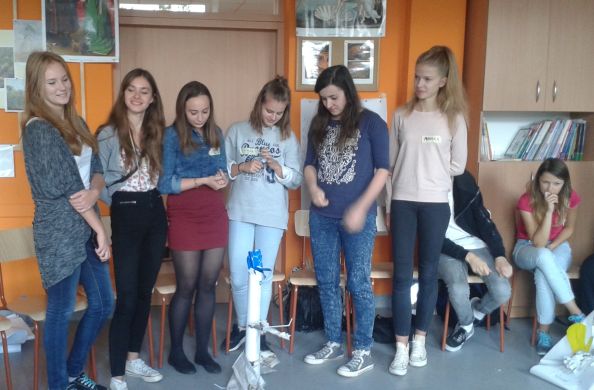 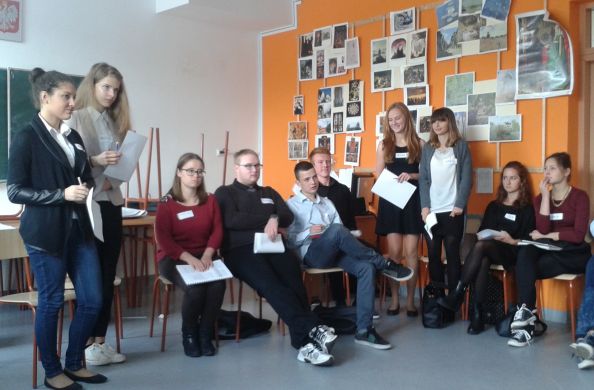 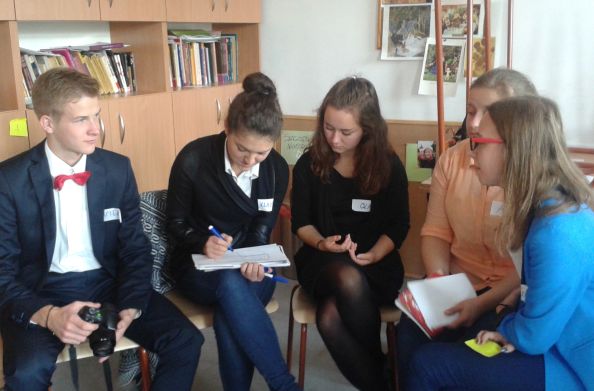 The students guided the tour, fired up imagination and aroused sensitivity. Whilst stopping here and there, they took tour down a memory land as to what they could see there. That there was the synagogue whose entrance for men was situated from the northern side, whereas a balcony for women could be accessed from the west. That this synagogue was high and beautiful, but the time was to go as the Shabbat was to begin and it would be crowded. When walking there, they met also Zelma Sztil, a young Jewish girl from Rabka who in 1942 was transported to one of the camps and must have died there. Shalom Zelma. Shalom. The trip participants met Zelma when she was heading for the Rabbi’s house.

They also could see Sigmunt Pasteur, a Jewish doctor who in 1941 fled from Cracow to Rabka. In 1942 he was arrested and shot in Nowy Targ. He was just going to see his Jewish patients. He explained in haste that he should hurry up and could not talk as he needed to go here and there. That he had a lot of patients who lived at houses all around the town. Suddenly, a German official arrived and ordered Pasteur to get off the pavement where he was not allowed to stand.

Then, they bumped into Anna Maria Bachaust, whilst recollecting Wilhelm Rosenbaum, a brutal commander in chief of the of the School for the Police and Security Forces Officers and her great love. Before they preceded further on, they were told about horse-drawn carriages and lanterns which Rosenbaum lit up where there most brutal acts of murder occurred in Rabka.

They were told about “Haus Annemie”.It was the house which Rosenbaum called after her.

When preceding further on, the group came across also two young girls who were returning from a funeral of their friend’s father, some says a decent man, an advocate.

Whilst continuing their walk and heading to the end, they happened to meet Rosenbaum himself. He was strolling in front of the Gestapo Office in Rabka. Rosenbaum was boasting about new stairs. The stairs were made of marble matzevahs plundered from nearby cemeteries, mostly from Jordanów. With inscriptions to the top, to be easily visible.

Further on, a tour guide outlined stories of other events which occurred in Rabka on Sunday, 30 August 1942.When she span her story, they could see in their minds ss-men chasing Jews out of their houses and ordering them to head for the square at the marketplace in Rabka. And they could see these Jews being crammed into wagons and forwarded towards Belzec. Even today we do not know their accurate numbers. We still do not also know exactly how many Jews were murdered in the nearby forest.

At the Jewish cemetery, being the cemetery and memorial, at the hillside of the Grzebień Mountain, each of the trip participant put a stone to symbolically commemorate the events which occurred in Rabka some few dozen or so years ago.

One of our projects involved the organisation of a walking tour for people from our town to show them that the Jews constituted a part of our society. This is how we could, even to a small extent, commemorate them and we did not remain indifferent to their fate.

It is not that only during workshops I learned about Shabbat, menorah or Torah; I had already had quite an extensive knowledge of the Jewish culture. But these workshops, despite factual knowledge, provided for many universal values. I have learnt to show a greater respect for other people and to make an effort to simply understand them, like a human.

I have learnt a lot about the Jewish culture. I have never shown a bigger interest in it, I did not even given it a thought. Now it is different, as I still search for more and more information and want to pass it on.