Radomyśl Wielki boasts an enormous market square, which is actually one of the largest in Poland. Its size gave the town its “Great” name (Wielki is Polish for “the Great”). There is a plaza and a parking, a green area, but also a road cutting through the square. On the other side of this road stands a prototype of a plane developed in 1956 in Mielec, but never released for mass production by the Soviet authorities due to its alleged “engine flaws”. This is where students who participated in School of Dialogue workshops meet with their tour participants to tell them about a very different market square and its surroundings.

Earlier, throughout a period of 10 weeks, Radomyśl junior high school students learned about Jewish culture and history of the Jewish community in their town, which dates back to early 17th century. Through games, group projects, discussions and individual work they gained new insights into Radomyśl. Arguably, they had become experts on the topic of Jewish Radomyśl. “Already after our first session many things had changed for me personally” says one of the workshop participants. “Now, when I walk through the main square, I imagine what things were like in the past. I see all those situations that would take place before the War”.

What students see are vending stalls with wooden roofs, mostly Jewish-owned, and the crowds swarming around them during Thursday markets. You could buy cold cuts, buns, sugar, flour, underclothes, work tools, as well as hats and caps. Radomyśl was home to pious Jews, who knew that there is Someone above man, so decent headgear was always in demand. Milliners of Radomyśl were said to provide hats to Jews all over Galicja. The northern part of the market square, where a minisupermarket now stands, was the location of a wood depot. The current bank used to be Jakub Trompert’s bakery, known for delicious cooked bagels. Students present archival photographs to their peers, whom they had invited for the tour: one depicts the square as it used to be: filled with people, women with headscarves, wooden vending stalls and right behind them – “the Jewish back alleys”, where Radomyśl Jews concentrated. Since mid-19th century, Jews comprised half of the town’s population. The community ceased to exist in 1942, when Jewish residents were herded into the market square by Germans and then driven out of town for mass executions. 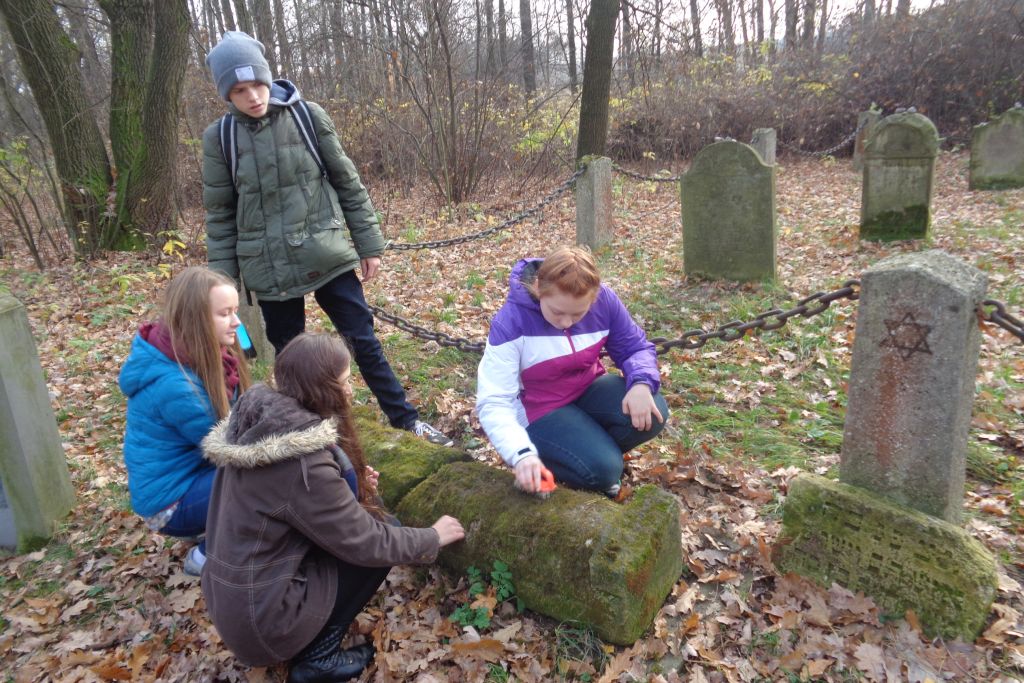 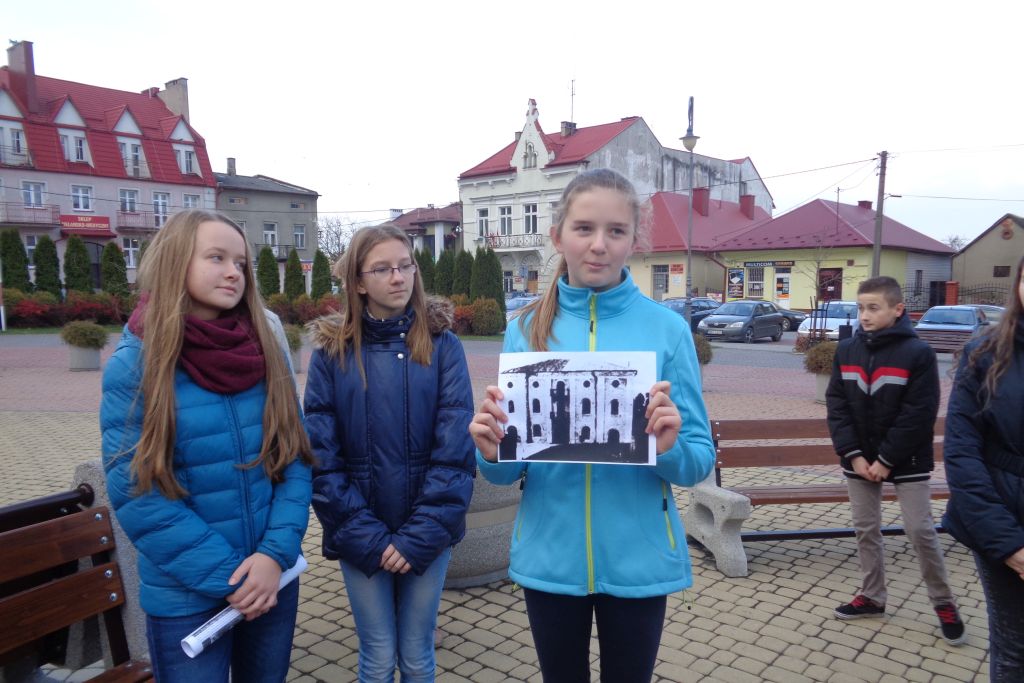 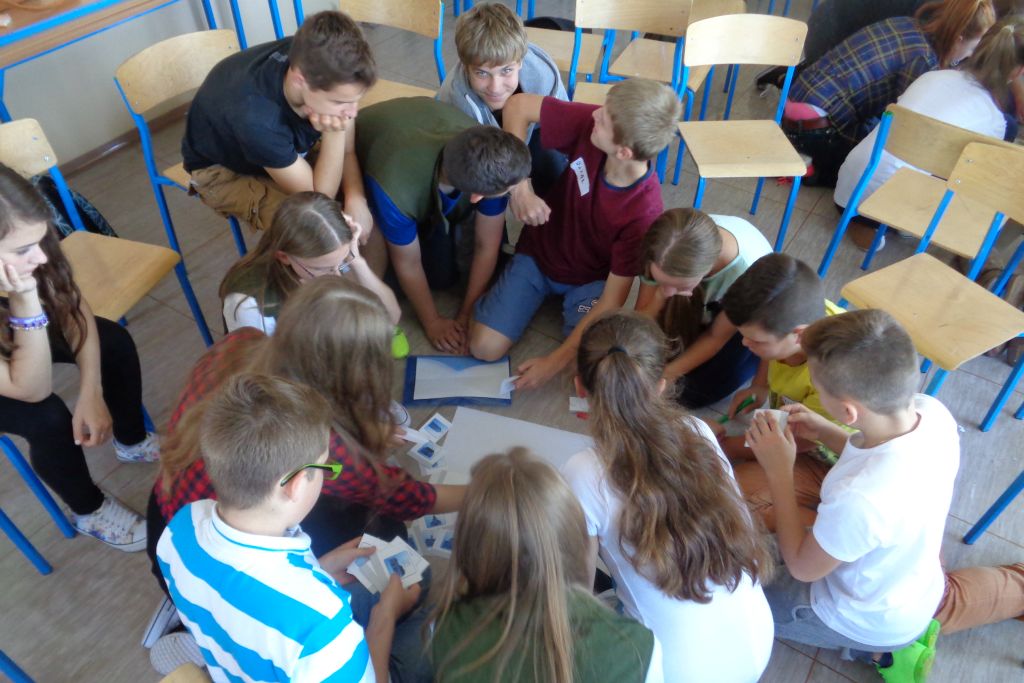 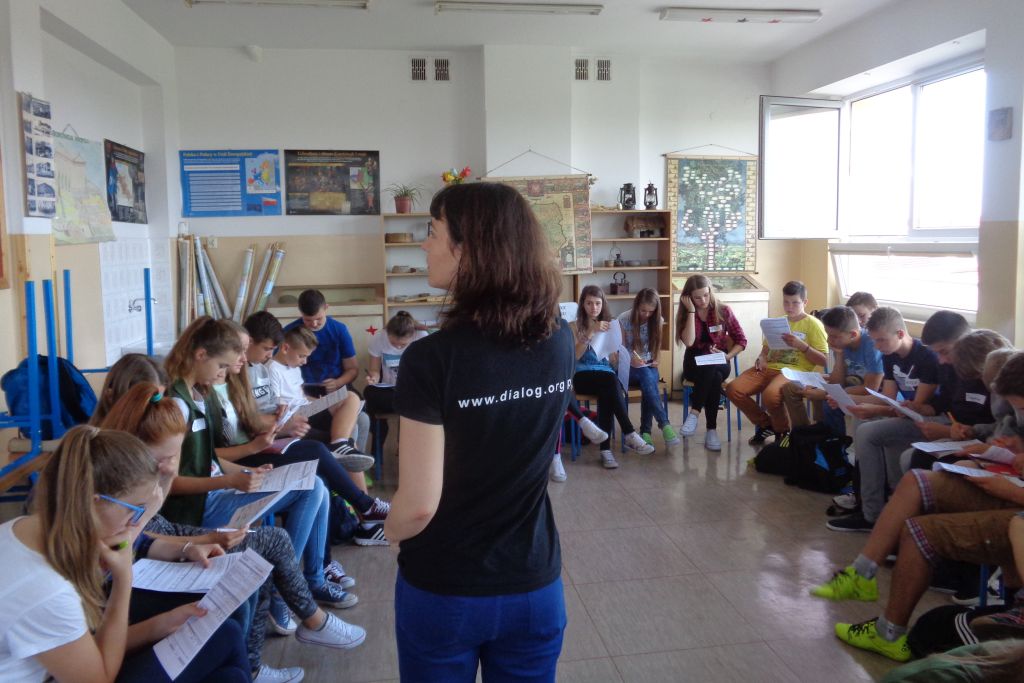 Students continue the tour and head to Rudzka Street, now known as Armii Krajowej Street, where a synagogue once stood: a large two-story building with high windows on both sides and three rows of windows on the main façade. No trace remains of the synagogue today – instead, we see a local bus stop on a broad traffic isle.

The tour continues towards a school. “I always wondered about the building next to the elementary school. Thanks to the workshops I now know that it was a Jewish bathhouse” says one of the female students who participated in the School of Dialogue workshops. She means the grey building at Targowa Street with a broken pane on the top floor and boarded-up windows. A while ago someone tried to renovate the mikveh and bring back the historical significance of the site, but formalities stalled the project.

Students explain the original use of the building: who used it, when and why; that every Friday Mer Kutz, whom some believed to be a holy man, would urge everyone to conduct their ablutions. And that Christians also used the mikveh.
The tour ends at the Jewish cemetery. Hebrew inscriptions are still well visible on the headstones and the matzevot stand in their original places. Students had cleaned up the cemetery prior to the tour, now they will do the necessary touch ups, lay down the stones they had brought, spend a moment in silence. As one of the project participants writes: “You should understand that the history of Radomyśl is full of joyous, but also painful and life-threatening moments. What happened here in the past should be explored and commemorated.”

Already after our first session many things had changed for me personally. Now, when I walk through the main square, I imagine what things were like in the past. I see all those situations that would take place before the War. I try to imagine how these people, seemingly different, but actually just the same as us, felt when they were treated as ‘other’ and discriminated.

I already know where the synagogue once stood, I also know the locations of the mikveh and other buildings. I am very sad to see that many of these buildings have been demolished and now completely different buildings stand in their place.

What did the workshops teach me? Definitely that my town’s history is much more impressive than I had thought.

I am impressed by the courage and heroism of the residents of wartime Radomyśl. Unfortunately, fewer and fewer people remember about them, and heritage buildings, which were once full of life, are now eaten away by time, or are torn down and forgotten. By working together we can do something for this town.