Rzeszów is the capital of Subcarpathian voivodeship with almost 190,000 inhabitants. Jews had been present in the town’s history since the 15th century, when they accounted for half of the local population. In the 18th century, Rzeszów was home to courts of some of the most famous tsaddik dynasties, among them that of Lazar Weisblum, grandson of the famous Elimelech from Leżajsk. In the 20th century, Jews were members of the city council and also would become mayors. Many bankers, industrialists, doctors and lawyers called Rzeszów their home, and so did Nachum Sternheim – a musician and composer who emigrated to the United States where he worked for Hollywood film studios. In the interwar period, “Jerusalem of Galicia”, as Rzeszów would be called, was inhabited by around 12 thousand Jews, which accounted for almost 40% of the local population. During the German occupation, a ghetto was created in the town; it was liquidated in 1943. To this day, two buildings of the former synagogues and the Jewish cemetery from the 19th century still remain.

In the course of the workshops, Rzeszów’s high school students explored unknown pages from their town’s history. They were aware that Jews had once lived in Rzeszów, yet they were not aware how rich their history and culture had been. They expanded their knowledge of the topic in the course of meetings they organized with the help of their supervisor.

One of the people they talked to was Marta Lasota, head of the Rzeszów University Museum, who established and administrates a website “In search of Rzeszów’s Jews”. The visit to the Jewish cemetery proved to be an important element of final project preparation. “I feel sadness and disbelief after seeing the Jewish cemetery, which has been completely forlorn and overgrown. I believe the cemetery should be recreated and the people buried there – commemorated,” said Kacper.

Students visited the cemetery with Wacław Wierzbieniec, who chairs the Department of Jewish History and Culture at the History Institute of Rzeszów University. Professor Wierzbieniec talked about Rzeszów’s Jews, Judaism and symbols used on Jewish headstones.

Students entitled their final project “Rajsza. In search of Jewish Rzeszów”. They prepared posters and invitations including the event’s itinerary and map of stops to be visited on their walking tour. On December 16, their guests (including a representative of the City Council, faculty members from Rzeszów University, teachers, parents and town residents) in front of the Old Town synagogue, the first stop of the walking tour “On the ruins of Rajsza – a walk in search of Jewish heritage of Rzeszów”. 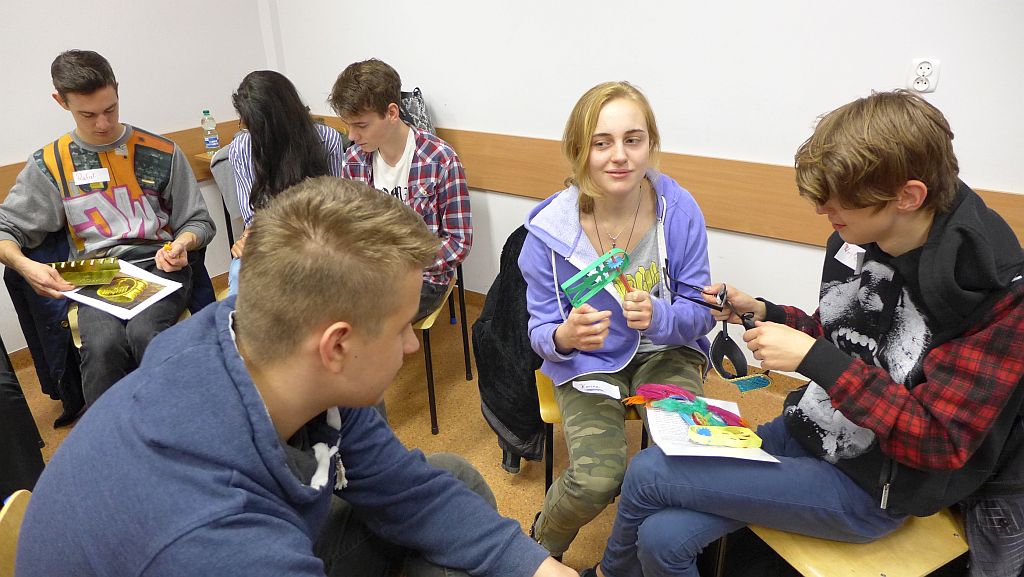 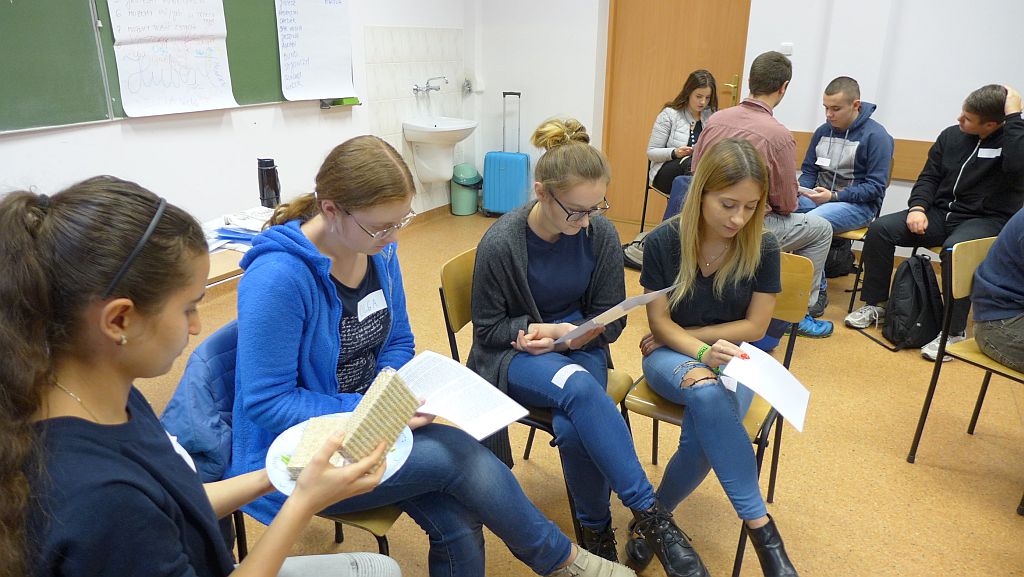 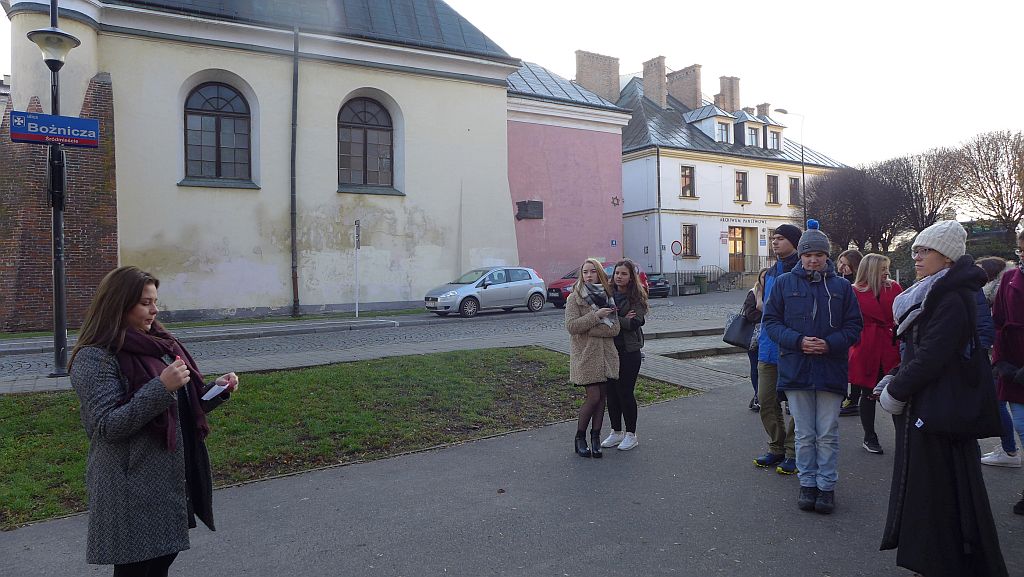 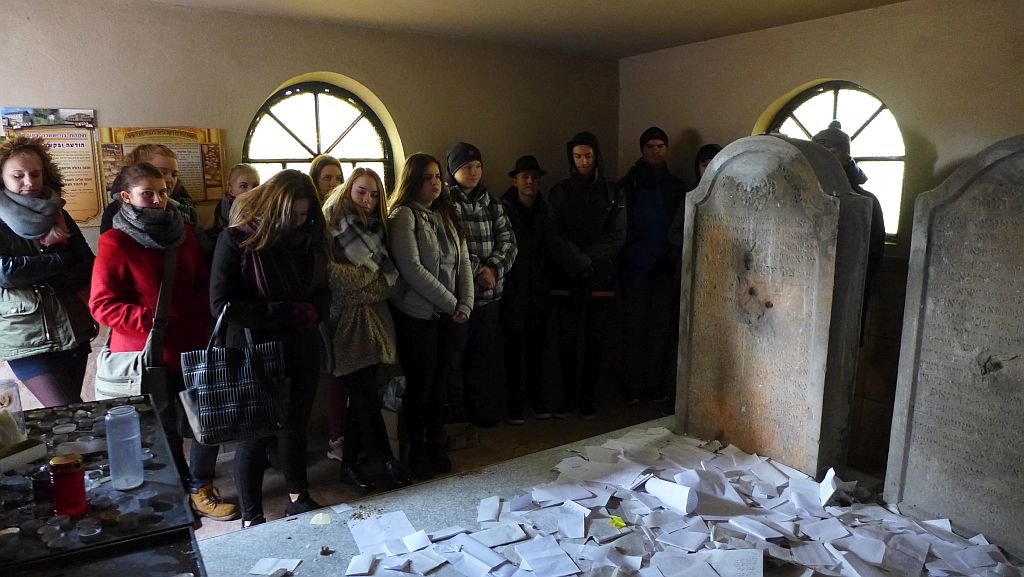 Ola, one of the students, talked about first Jewish residents in the town, described how the Jewish community developed and recounted the history of the synagogue building. Then everyone headed to Kopernika Street, where Kacper discussed the Jewish fate in World War II, with special emphasis put on the history of Rzeszów’s ghetto. The next stop was Bet Am People’s House, which now serves as Voivodeship Cultural Center. Tour participants heard about the institution that once had been the largest cultural and educational center for local Jews and about its sponsor Adolf Tannenbaum, a local entrepreneur and philanthropist. In the municipal park next to Ghetto Victims Square (Plac Ofiar Getta), Agnieszka, Wiktoria and Izabela presented the history of the cemetery, Jewish rituals connected with commemorating the dead and talked about a symbolic rock that commemorates Jews murdered in Rzeszów’s ghetto. The tour’s final stop was the new Jewish cemetery at Rejtana Avenue, where Pola discussed the site’s history and devastation.

Tour participants strolled among almost 800 surviving broken headstones and examined three recently renovated ohels. For the remaining project activities, guests were taken to Rzeszów University campus, where students lighted candles and explained the symbolism of Shabbat. A multimedia presentation entitled “Rajsza of Yore and its Inhabitants”, in the course of which students presented archival photographs of sites connected to Rzeszów’s Jewish history and biographies of some of the important Jewish residents, including Aaron Lewin, Adolf Tannenbaum and Baruh Sternheim. Then it was time for a snack, which was preceded by student presentations on Jewish cuisine. Guests were also eager to see the exhibition “In Search of Rzeszów’s Jews”, Jewish artefacts connected to various holidays and sift through publications about Subcarpathian Jews. Students prepared a presentation and a documentary film about their project work. They also regularly informed on their progress through their project’s Facebook fanpage.

Hardly anyone in Rzeszów knows more than the absolute basic fact: that there had been many Jews living here. It’s strange to know something that everyone else should be but is not aware of. It also makes me feel helpless, because Jews were a big part of this town’s history, which they helped to shape, yet no one remembers about them now. It’s a good thing that we can tell others about Rzeszów’s history. Even if one or two people become interested and decide to put their newly gained knowledge to use, I’ll consider this a success.

Now I realize that the Jewish community was a big part of Rzeszów.