School of Dialogue at High School No 2

Sandomierz is a town with a thousand years of history, located by the Vistula river. It’s picturesque and well-preserved medieval architecture attracts crowds of tourists every year. The first Jews started to settle in Sandomierz already in the 14th century and in 1938 the Jewish community constituted 27% of town’s total population. The town has many historic buildings, one of them is a synagogue renovated after the war. It now houses the State Archives. There is also a Jewish cemetery in Sucha Street. One can also mention the infamous paintings in the local cathedral presenting the so-called ritual murder perpetrated by the Jews. Today, the presence of these paintings recall above all about the false accusations, trial, torture and finally the death of Jewish town residents. Recently a plaque was put up informing visitors that the accusations were false.

Only a handful Jews came back to the town after the tragic times of the World War II. What is left of the Jewish presence there? Is it being remembered today?

In the spring of 2013 Forum for Dialogue educators came to the High School No 2 in Sandomierz to organize workshops as part of the School of Dialogue program. The young students were very enthusiastic about it and became very engaged in learning about the religion, customs and history of the Jewish people. They were also slowly discovering what was for them the unknown history of their own town, the history of the Jews from Sandomierz. The final project of the workshop, prepared with the help of Forum educators, was a walking tour following the footsteps of the town’s Jewish community. In order to prepare it well, the high school students split into groups – one group prepared historical materials from what they had found in local library and museum, whereas a different group of students worked on presentations, and another one was responsible for the multimedia. The students also made sure to prepare some Jewish treats for the tour, including a challah bread and matzah. 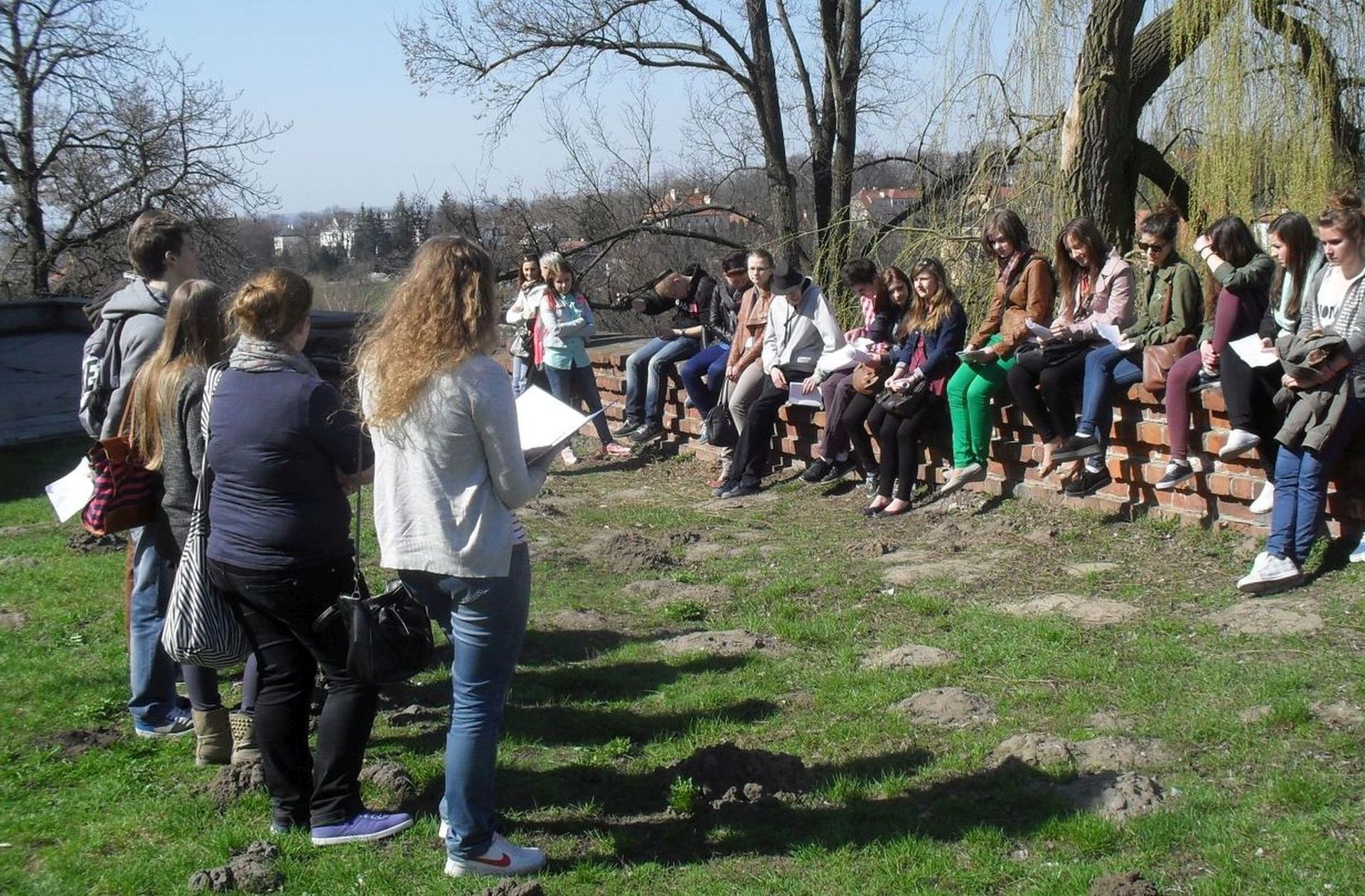 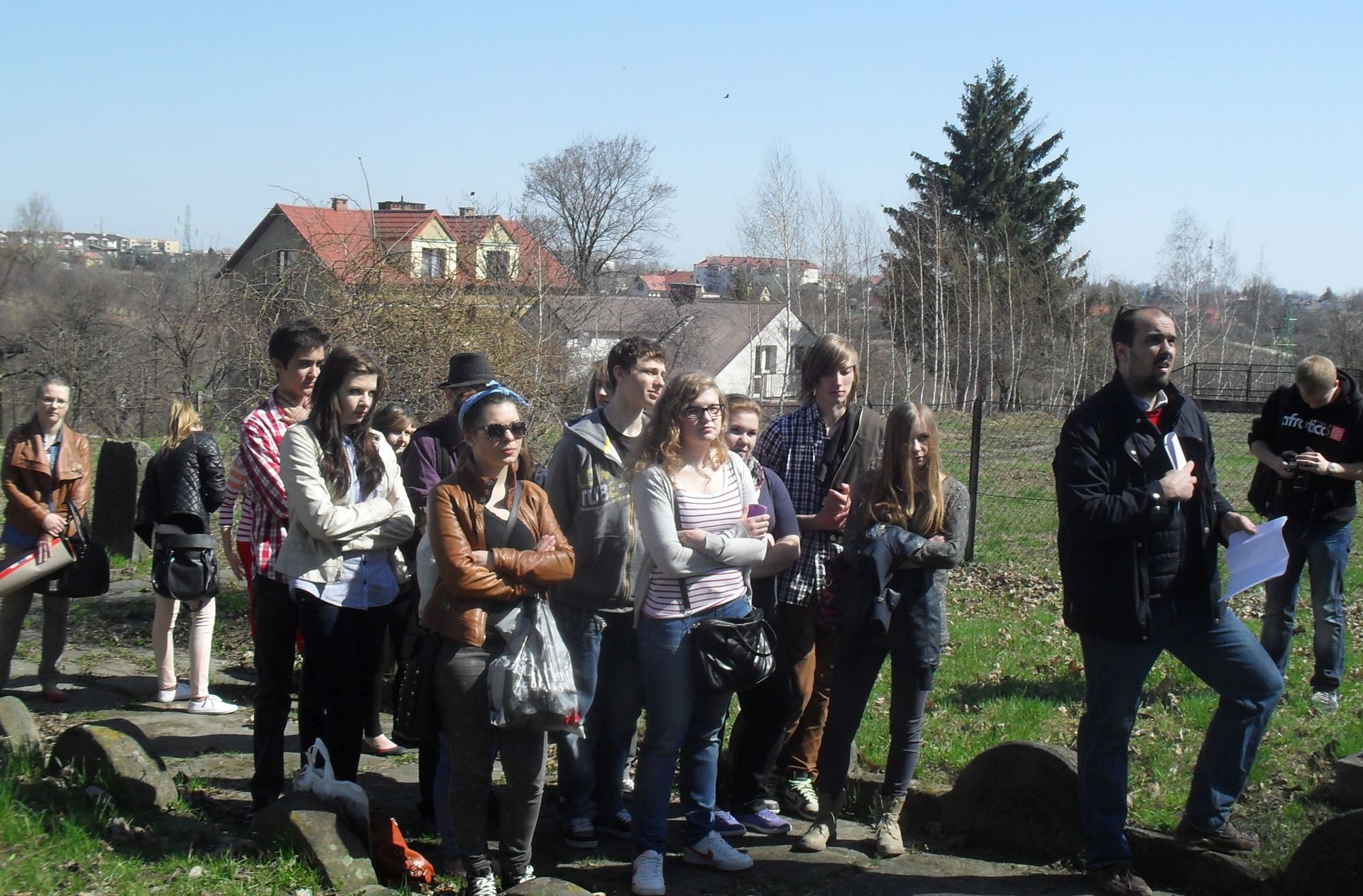 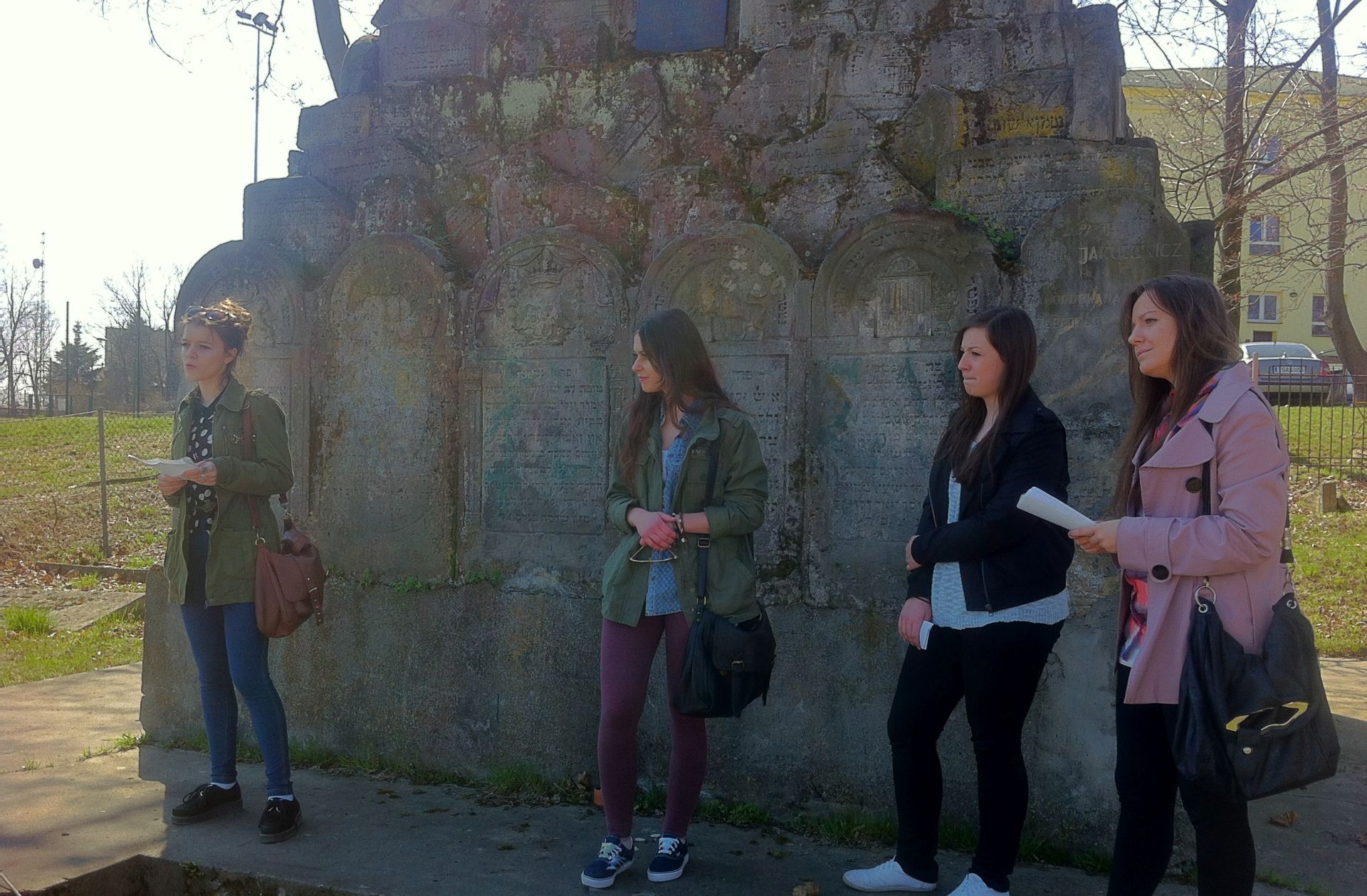 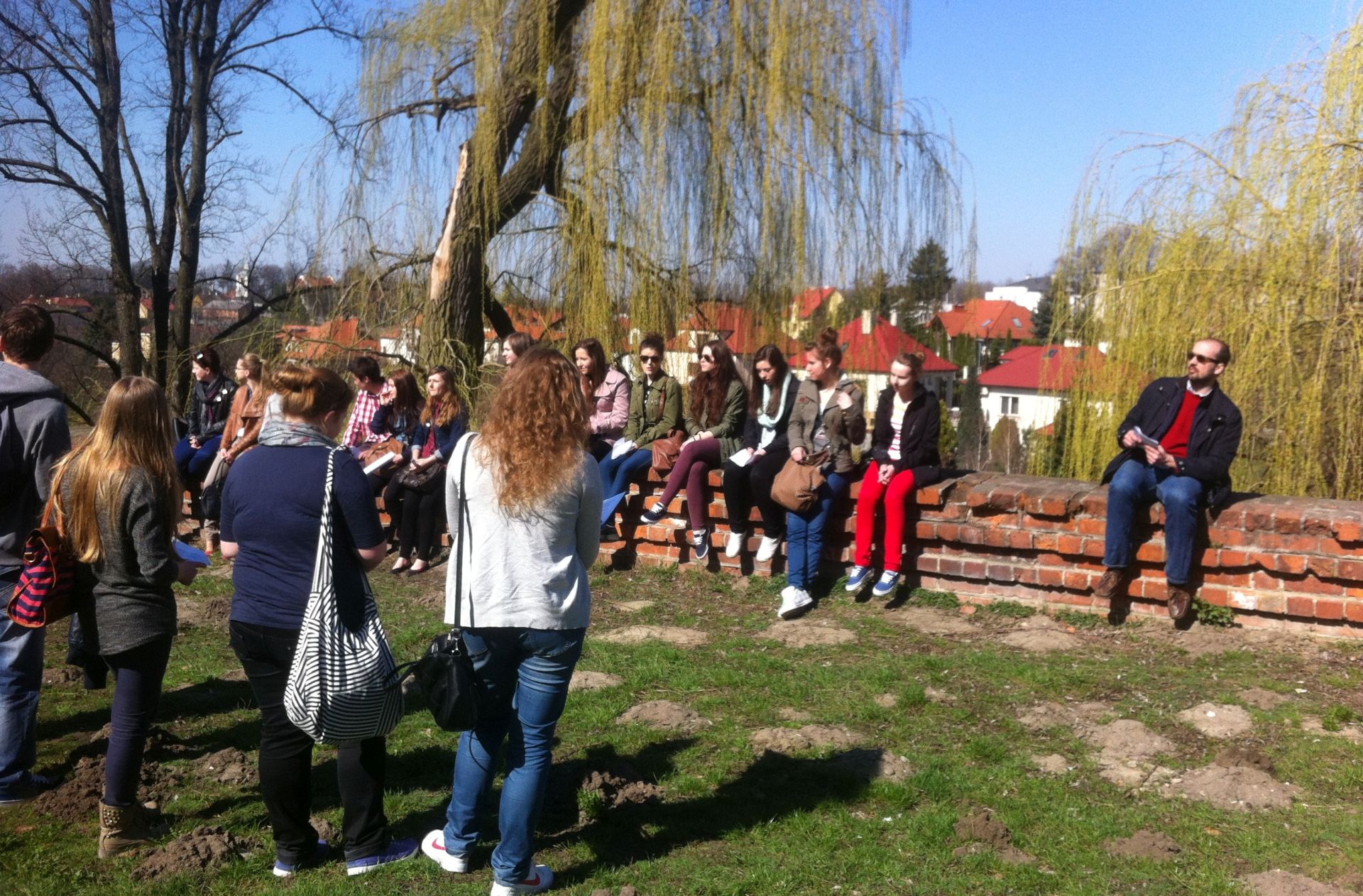 The tour mainly covered the Old Town. The invited guests – fellow students, teachers, parents, journalists and even the representatives of PTTK (Polish Tourist and Sightseeing Society) in Sandomierz- were guided by the students. The first stop was the historic town hall building where the students-guides showed the tour participants a film about Sandomierz and displayed photographs of Jewish residents of the town. They then walked to Diocesan Museum where they could admire a well-preserved Torah scroll, a Hanukkah lamp, a spice tower and an artistically decorative spice container.

Next, the high-school students took their guests to the synagogue building, the one renovated after the war, originally built in 1758. Only some wall polychromes, Hebrew inscriptions and a Gothic portal survived from the original decoration. The interior of the synagogue can only be admired on photographs, because it is a home to State Archive. The students described the building to the gathered guests and explained the role and function of the synagogue rabbi. Then, the tour followed the traces of the ghetto.

The students indicated the borders of the ghetto delineated by Berek Joselewicz, Zamkowa and Żydowska Streets of the Old Town. During the war about 5,200 Jews from Sandomierz and its area were resettled to the ghetto. In October 1942 most of them were displaced to Bełżec. Those who had managed to escape the deportation, were again put in the so-called second ghetto, liquidated in January 1943. Some were taken to the work camp in Skarżysko Kamienna, some to Treblinka. The students, profoundly moved, told the tour participants about the atrocities of the German occupants to those in the ghetto but also about a few brave Poles who risked their lives to save their neighbors. One of them was Genia Kłos from Sandomierz about whom Lejb Zylberberg, a survivor from Sandomierz, wrote in his memoirs.

The last stop of the tour was the Jewish cemetery where the students wanted to pay tribute to the victims. A memorial now stands on its territory. Before entering, the students told the tour participants about Jewish funeral traditions and explained inscriptions on the headstones.

The workshop that was organized in our school provided us with a lot of information about Jews, Judaism, their customs and the places where they had lived in our town. We learned about the Jews who had walked the streets of Sandomierz, that we owe them a lot, and also that some of us have Jewish ancestors.

I am very happy to have participated in the workshops. It helped me see the Jewish community in a new light. I learned so many interesting things. I keep good memories of this event and recommend it to others.