School of Dialogue at Juliusz Słowacki High School No 1

In the village of Kamienna that later became a town and then changed its name to Skarżysko-Kamienna, Jews would settle as early as in the 18th century; by 1921, they accounted for 20% of the local population. Most of them produced steel or worked in tanneries. In 1923 a kehilla was established. A wooden synagogue, mikveh and cheder were built, and a Jewish cemetery at the present-day Łyżwy Street. In 1935, the old synagogue at Fabryczna Street was replaced with a brick one. In 1941, Nazis created a ghetto in the town, whose 2,500 inhabitants were later deported to Treblinka extermination camp. They also established a HASAG work camp, where ca. 20,000 Jews perished. Since January 1944, the camp started to officially function as a concentration camp.

When describing School of Dialogue workshops in Skarżysko-Kamienna, it is worthwhile to quote the students themselves, who thus remember their sparking interest in their town’s Jewish history: “It all began out of curiosity and unanswered questions: why were the remains of the synagogue removed in 2006 and the building was not commemorated in any way? Why does the inscription on one of the Jewish tombstones in our town read ‘murdered in December 1945’? Why a local woman who received the title of Righteous Among Nations does not want to talk to anyone about it?” Through School of Dialogue workshops, high school students searched for answers to these and many other questions. They got completely engrossed in investigating the local Jewish history. 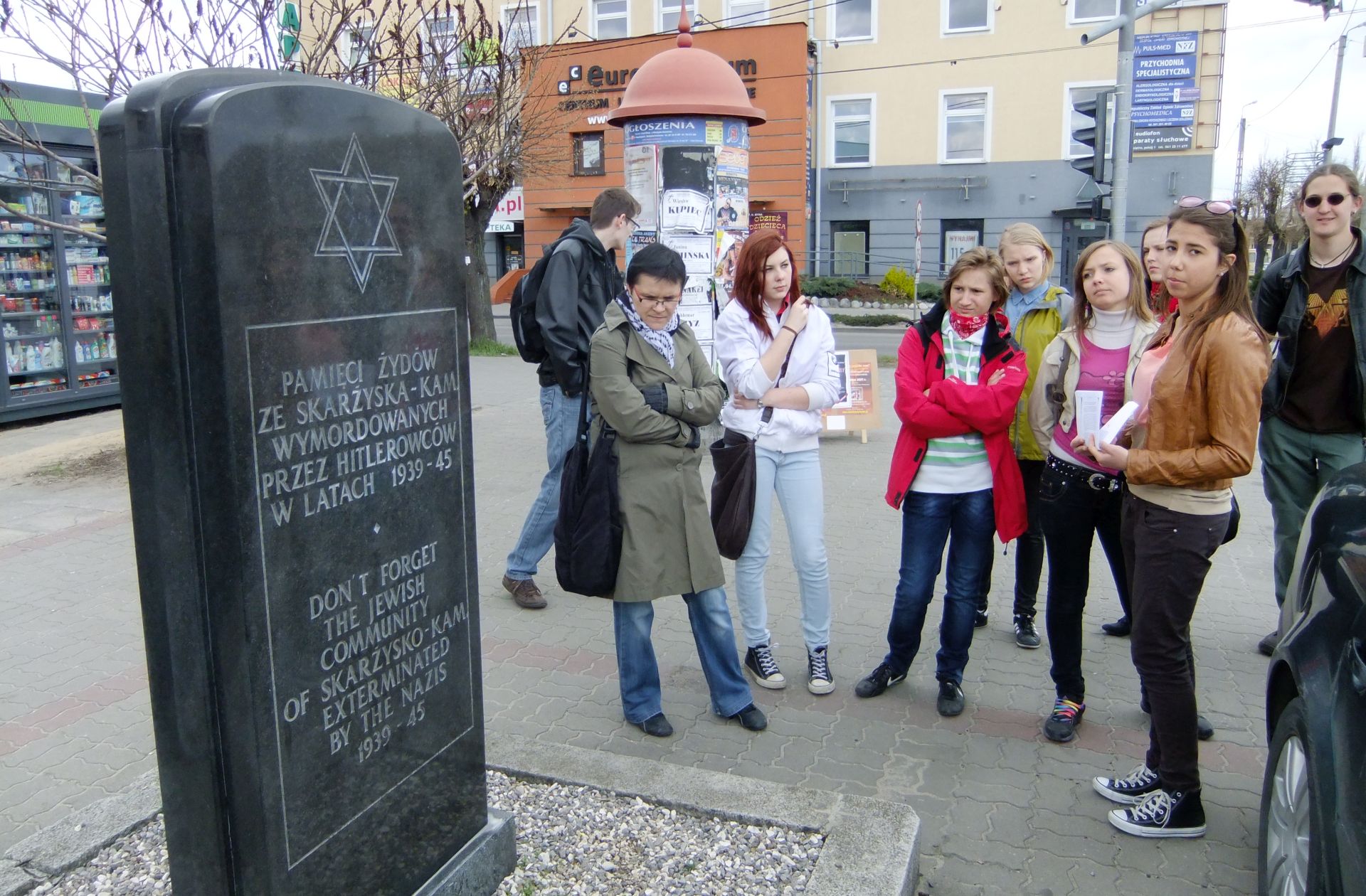 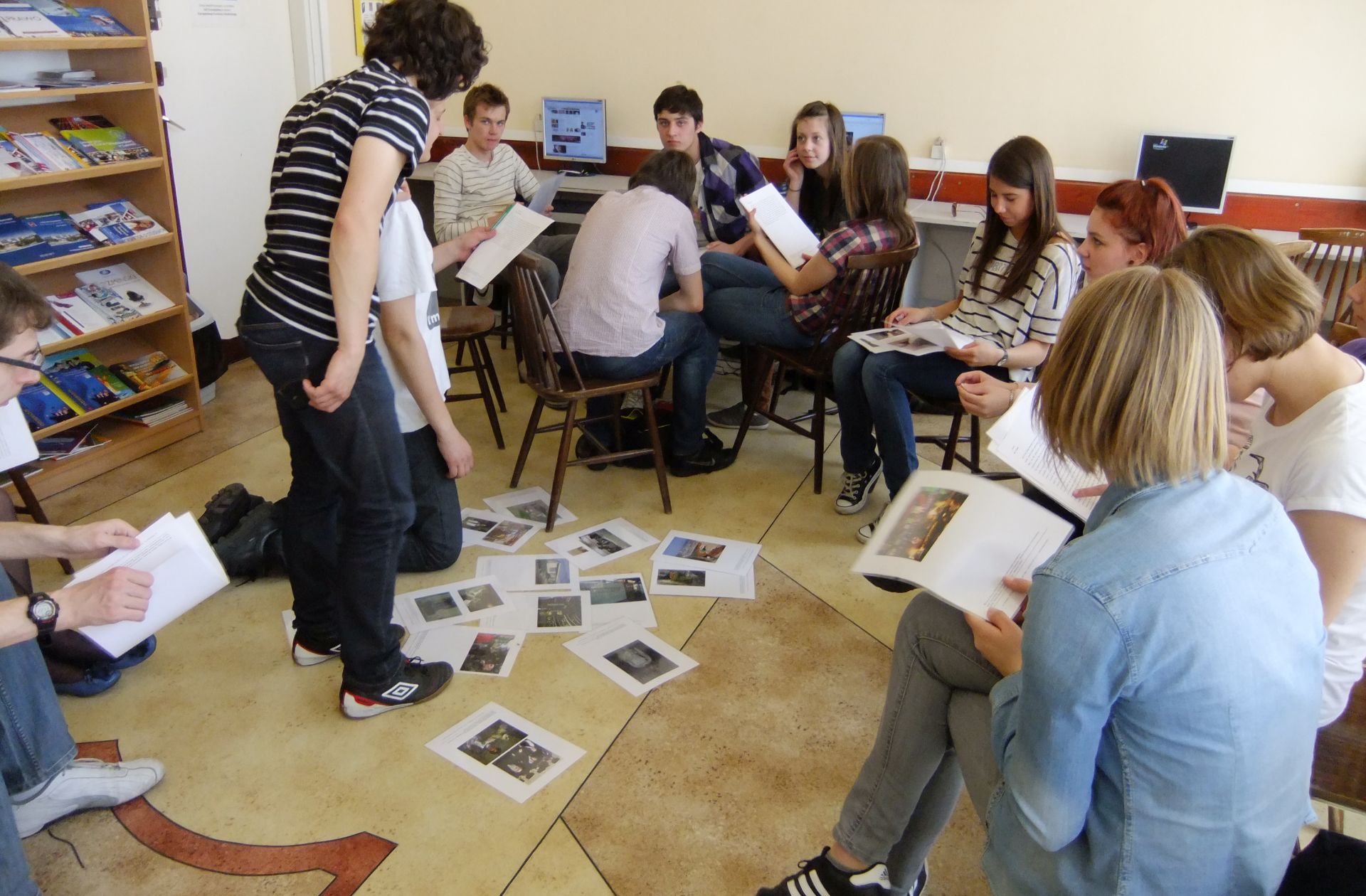 During the workshops, they held animated discussions about the situation of Poles who were hiding their Jewish neighbors during the war, the stereotypes related to Jews and living and working conditions in the HASAG labor camp. They managed to obtain prisoners’ testimonies from the camp. They also met with Edward Kopówka, director of Museum of Struggle and Martyrdom at Treblinka. Students were agitated by the fact that the site of the synagogue in their town has not been commemorated in any way. In the course of the research on Skarżysko’s history, they also uncovered a gruesome story related to the building of their school: its foundations contain matzevot from the liquidated Jewish scemetery. Probing the topic, they learned that a hospital for German soldiers was housed in the walls of the school during the war.
In the course of preparations for the walking tour of Jewish Skarżysko-Kamienna, students divided themselves into groups. Some of them looked for information, others created posters with photographs of memorial sites, still others studied maps and laid out the tour’s route, while the boys from the local Film Discussion Club documented all activities for the purposes of a film that would document School of Dialogue program’s implementation.

On June 28, School of Dialogue participants took their peers on a bike rally covering local Polish-Jewish memorial sites. They talked about Skarżysko’s prewar and wartime history. Their guests visited the area of the former ghetto and saw the site of the demolished synagogue, whose layout remained unchanged up until its demolition. The group stopped next to a Jewish monument and visited the Jewish cemetery, where they learned about the symbolism of Jewish headstones.

At the very end, guests were asked to voice their opinions. “What I moved me the most in the course of the rally was the history of Skarżysko’s ghetto. It was an emotional story of people who were forced to carry heavy sacks of saltpeter in the cold, without any warm clothes or shoes” said Monika, sharing her reflections. “I liked the site of the former synagogue the most. Although there were only trees and bushes there, you could feel the gravity of the place” said Arek, while Paweł added: “I was not aware that we had such a beautiful Jewish cemetery here…”

I like to organize various events and these workshops allowed me to gain the knowhow in this respect … I learned many interesting things that I would never know had it not been for this project. The workshops encouraged me to act and keep on investigating. I would like the sites we learned about to be marked in the town in some way.

During the workshops we learned many interesting things we had not the faintest idea about earlier. Our town has a fascinating history that no-one ever tried to convey to us … The workshops motivated us to become interested in the issue of local attitudes towards Jews.

I have been living here so long and still I did not realize that there are so many interesting, sometimes dark secrets hidden within the walls of my town.