School of Dialogue at Stanisław Staszic High School No 4

„Where was the Jewish hospital located? Are there any remains of synagogues in the town? On which of the Jewish cemeteries are still burials? I do not think there are many Sosnowiec-dwellers who could answer these questions.” – said article on the hish school’s webside while preenting the project of the second year students, to improve the knowledge on the Jewish community that used to live in Sosnowiec.

Sosnowiec is the largest city in Dąbrowa Basin (Zagłębie Dąbrowskie); its name comes from pine (pol. sosna) forests growing in the area before 1830s. Jews began to settle in Sosnowiec fairly late, i.e. only in mid-19th century. The first to come was most likely Abram Blumental, who moved to Sosnowiec from Modrzejów in 1859. He erected the first brick building in town, right next to the customs office. Jews that would arrive in subsequent years would settle closer to the train station.

This is where Forum for Dialogue educators Anna Maculewicz and Beata Godlewska went to see if there is anything that could be done and anyone willing to help remember Jewish Sosnowiec. Resulting from joint efforts of the two educators and their workshop participants, a walking tour entitled “From cradle to the grave” was created. The tour was to present what prewar Sosnowiec was like, how Jewish life had looked and how it ended.

For a considerable time, Jews of Sosnowiec lacked their own Kehilla or cemetery; they would bury their dead in nearby Będzin. A separate Jewish cemetery was only established in Sosnowiec in 1893, when the plague epidemic reached the town. By 1896, construction of the Great Synagogue at Policyjna Street was complete; two years later, a kehilla was formed.

Sosnowiec teemed with Jewish life. Both Zionism and the Jewish workers’ movement existed in the town; members of the latter participated in organizing first strikes. During the 1905 revolution, Jewish youth joined the protests and between 1906 and 1908 Poalei Zion and Bund were established. In 1915, Jews of Sosnowiec opened a modern high school and one year later – a library named after I.L. Perec. Zionists organized meetings and debates, Maccabee organized the sports life and Agudat Israel was established; some of its members would sit on the city council.

Things would get turbulent. In 1903, during Rosh ha-Shana celebrations by the riverside, Polish workers threw rocks at local Jews. The police intervened, but no serious harm was done. In July of 1911, another group burst into the synagogue filled with praying Jews. They had been told a Catholic girl had been kidnapped.

Germans entered the town on September 4, 1939 and murdered 30 Jews in the first organized executions. On September 9, they burnt down the synagogue at Dekerta Street. ‘Dulag’ transit camp was created for those, who would later be deported to labor camps, and surrounded with barbed wire. Zwilag camp was intended for families of Jewish workers who were in hiding to avoid deportations. In 1942, a ghetto for young Jewish workers was created in the city’s district of Środula. Those who were too weak or too old were placed in Modrzejów and Old Sosnowiec ghettos. On the night of July 31, the ghetto was liquidated; that night, around 400 of its residents died fighting or trying to escape, over 10,000 others were deported. Jewish Combat Organization (ŻOB) fought despite virtually no chances for victory. Those who remained were forced to clean up the bodies and were then sent to Auschwitz-Birkenau. On January 15, 1944, the last transport headed out of Sosnowiec. Those who came back after the war were survivors of the camps and the people who had been resettled to USSR. In June 1945, there were 2719 of them altogether, but no one settled down for good. They would continue westward or head to Palestine.

Staszic students divided themselves into smaller groups and spent hours collecting information that they then attempted to consolidate and catalogue. They changed the route and reconsidered the concept of the tour. They ran a test tour, then another one; the former with Forum’s educators, the latter with board members of AMTRA company from Sosnowiec, including Mark Sheron for the U.S.. Students spoke in English, presented riddles and asked trick questions. What was here? And there? What do you know and what don’t you know? Mark Sheron was moved, and the students proud that everything went smoothly. 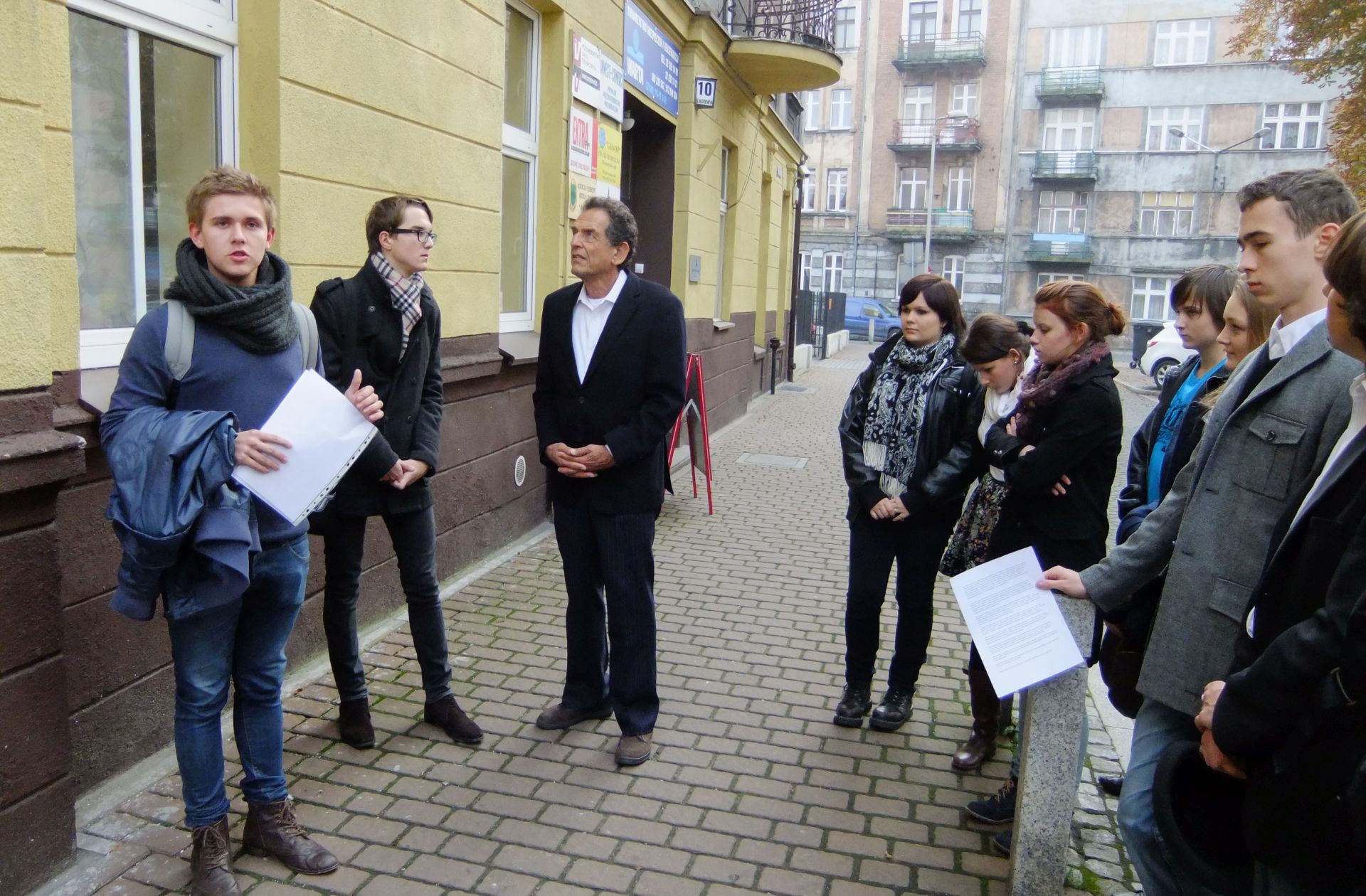 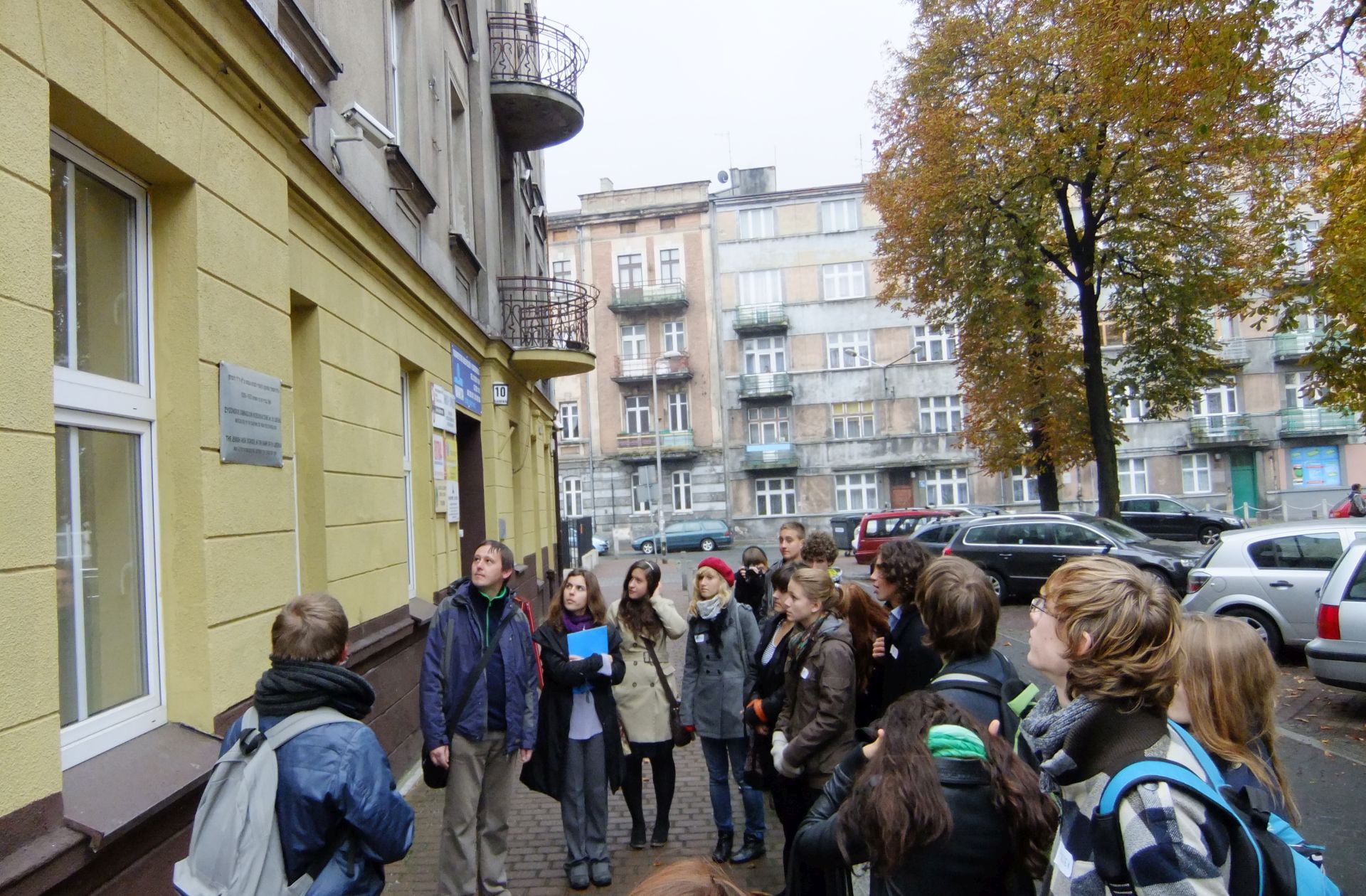 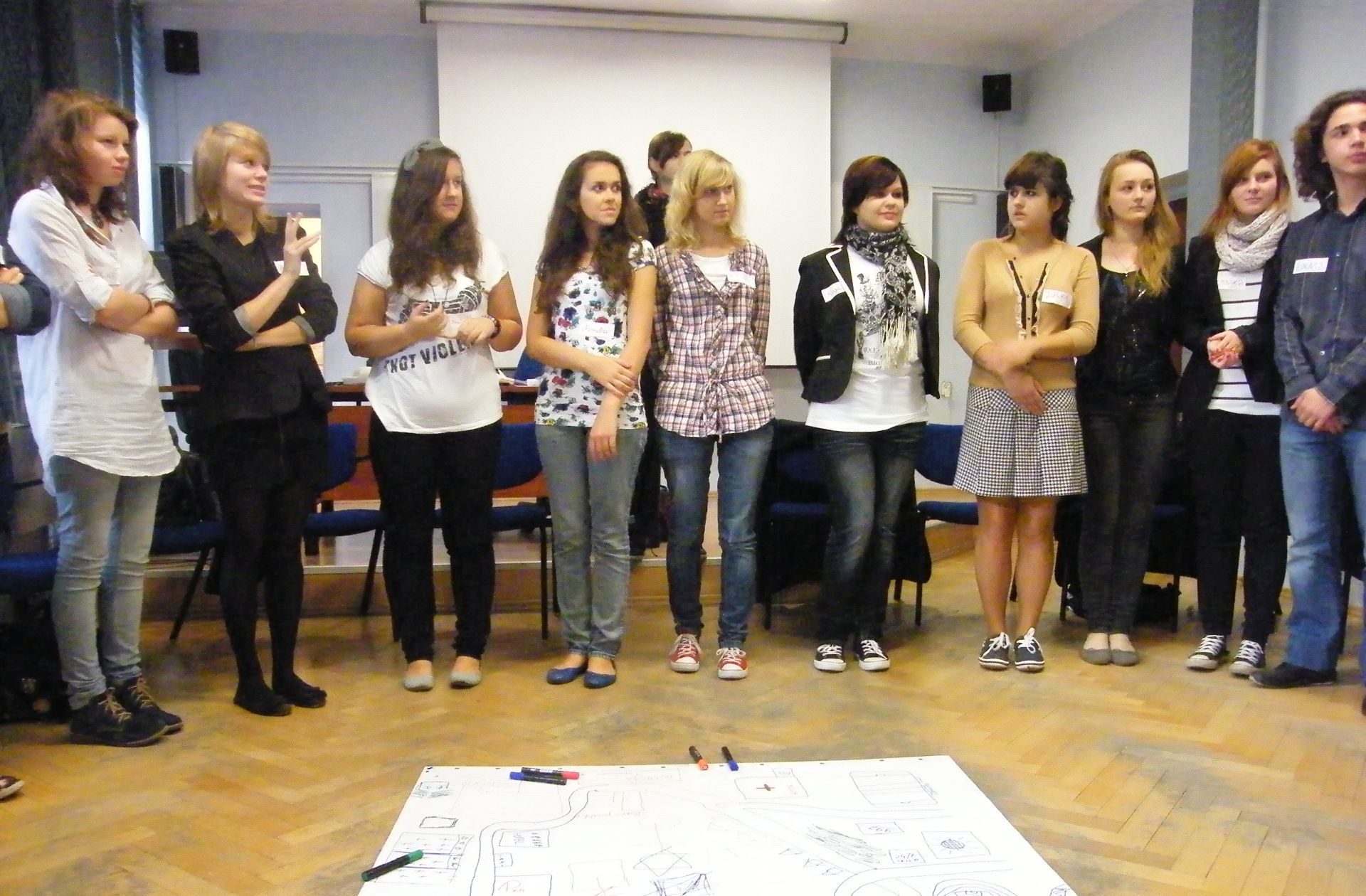 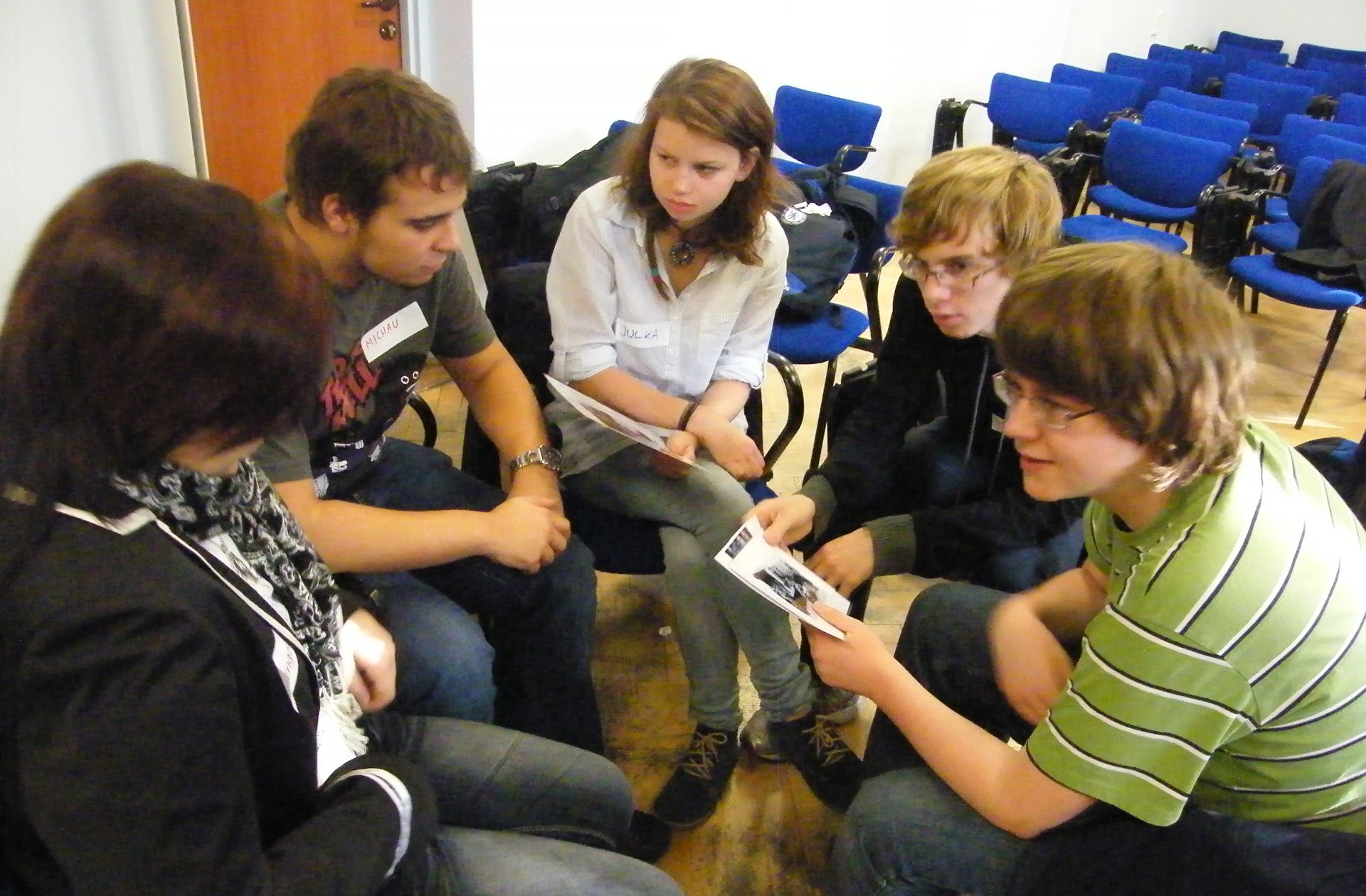 After final changes to the route, invitations could be sent out to those invited for the tour. Hummus was made, kipahs cut out and presents prepared – in the form of souvenirs donated by the town hall.

On November 17, 2011, a group of tour participants from various local schools gathered at Ćwieka Square. At the very beginning – as it should be – tour organizers gave their guests a historical overview of Jewish presence in Sosnowiec, mentioning the most important and the most interesting facts. The group then headed to the building at 10 Sadowa Street which used to house dr Liberman’s Jewish co-educational secondary school. Then on to the former seat of the local Maccabi branch – a sports association that had over 300 members before the war, with cycling, boxing and skiing sections, among others.

And then to Targowa Street, where Władysław Szpilman’s former house still stands. Young guides talked about the composer’s life and works – “There’s no happiness without love”, for example. While in the Warsaw ghetto, Szpilman occasionally played the piano in Café Capri and other small concert venues, when this was still allowed. In 1942, Szpilman lost his whole family; it was then he stopped playing the piano altogether. A Jewish policeman saved him from being deported to Treblinka death camp, while Wehrmacht captain Wilm Hosenfeld – who later died in Soviet camp and was posthumously awarded the title of Righteous Among Nations – saved him from starvation.

Later on the group headed to Dekerta Street, where the Great Synagogue once stood and a marketplace was located until recently; a new shopping pavilion will be built on the site. Staszic students described what particular life stages of a religious Jew are like and asked if anyone sees any similarities to that of a religious Catholic.

Next was Modrzejewska Street, inhabited by Jewish residents before the war, with many Jewish-owned shops, enterprises, prayer houses and organizations having their addresses there. At number 31 was Nordyja Sports and Gymnastics Association, where you could play ping pong, among others. A few doors down was the office of Association of Jewish Women for Financial Support of the Poor led by Frajdla Wiśnic, with around 100 members. The women helped young mothers, children the poor and the sick. The adress: 23 Modrzejowska Street. At number 22: a prayer house, with a library and a Talmud Torah school. At number 21 was Izaak Markowicz’s pastry shop, and at number 11 – Sonenstein Tolf’s teahouse, which shared the address with Mizrahi beit midrash.

Number 16 was the address of wine, vodka and tobacco depot. The house at number 10 was where you could once buy wool, and at number 6 you would shop for suspenders, ties and hats. At number 2 you’d shop for shoes and to top it all off, you would head to number 4 – for jewelry.

In the City Information Center, high school students organized a screening of a film for their tour guests and exhibited excerpts of Pulitzer-winning graphic novel Maus. The film was to give a rough idea how Sosnowiec might have looked before World War II, and the graphic novel was meant to evoke reflections and stir the audience’s imagination. Each tour participant was asked to fill out a survey, was treated to a meal and received a small souvenir.

And then back to the route, leading to a plaque commemorating – in four languages – what was once an orphanage and a hospital (at 7 Odrodzenia Street and next door at no. 9). Both buildings still stand. A former hospital at no.9 is now a Medical Center; however, the building of the orphanage stands abandoned.

The group finished the tour at the Jewish cemetery on Gospodarcza Street, devastated during the war and pillaged afterwards. Some of the headstones were used to pave one of the local roads, some were sold to local stone masons in the 1950s. Traditional matzevot now stand next to obelisks and spectacular tombs. Inscriptions are a mix of Hebrew, Polish and German. There is concrete and sand, light-colored marble and dark granite. There are also symbolic graves to victims of World War II and the Shoah, but also graves of those who had been murdered in early September 1939. Next to the entrance – a monument commemorating Jews of Zagłębie. The cemetery still functions.

After finishing the tour and the whole project, School of Dialogue participants organized an exhibition in their school depicting Jewish Sosnowiec before World War II. They presented photographs, drawings, and quotes in hopes that these would help others see and understand more. They also contacted a local newspaper (Dziennik Zachodni) that later ran an article on the students and their project. The students also documented the whole project in an elegant school chronicle.

I have been living in Sosnowiec since I was born, I am Catholic, I regularly go to church. Never before I have thought about other religions in my town. I have lived my own life, I have never tried to learn about other religions in Sosnowiec. However, this year my class took part in a cycle of workshops which presented the Jewish religion, culture and history in this area.

We decided to share our knowledge by organising a tour along Sosnowiec ‘Following the Traces of Jews’. I think it is a very valuable experience, both for me and for my class, as it enabled us to change our attitude and awareness and it is a path to fading the differences and barriers among nations.

I looked at Sosnowiec in a different way. Anonymous places, streets used every day for moving from one place to another, old, sheltered tenement houses – all these places spoke in their own name and became evidence of the history. They bridged a gap between the past and the present. I think I know and understand more now.

It is good to be aware that someone from the other end of the world thinks about the place in which we live in a different way, with some longing and fascination. These thoughts make us believe that we are one big family.

School of Dialogue program in Sosnowiec was made possible by the support from AMTRA LTD.