Staszów is one of the towns in Świętokrzyskie voivodeship reached by School of Dialogue program.

On the eve of World War II, Jews comprised around 50% of the local community. The first appeared at the beginning of the 16th century, but only for a short moment, as they were accused of blood libel and forced to leave Staszów in 1610, to come back only 80 years later, 1690. In 1718, the community established its own cemetery and erected a synagogue. Jews worked first and foremost as cap-makers, tailors, shoemakers and goldsmiths. Some were also craftsmen and merchants. They had their own market stalls, they worked as traveling salesmen. For a long time, Staszów was famous for its Jewish musicians and cantors. In 1865, 64% of the local population was Jewish, of which many were Hassidic. Apart from the synagogue and two Jewish cemeteries, the community had five cheders, three prayer halls, a mikveh, a slaughterhouse and a beth midrash. Furthermore, two yeshivas and I.Perec library existed in the town, while one year before the outbreak of World War II, the Association for Supporting Talmudic Studies – Yeshiva Beit Torah – opened in the town. Jewish parties Aguda, Mizrachi, Poalei Zion and Bund all had their local supporters. Linas Ha-Tzeddek and Last Offices Associaton functioned in the town, and so did the Jewish Artisan Union.

A Judenrat was created in Staszów in 1940, soon after the German army entered Staszów. Jewish property was confiscated, if there was anything that could be confiscated. Jews were subjected to forced labor and on June 15, 1941, they were locked inside the ghetto. Different historical sources provide different numbers; population estimates for the ghetto range between 5 and 9 thousand.

The ghetto’s liquidation began in early November 1942, when most of its residents were deported to Bełżec death camp and many were shot on-site. Everyone else was sent to Treblinka death camp at the turn of 1942 and 1943. Only a handful of Staszów’s Jews survived the Holocaust.

The synagogue no longer stands at 7 Bożnicza Street (Synagogue Street no.7); it was torn down over a decade after the war and the local governor’s office took its place. The street has been renamed to Świerczewskiego and only the number 7 remains unchanged.

Similarly, no trace of the old Jewish cemetery located down the same street survives. The graveyard was devastated, not a single headstone remains on its premises. In early 1990s, renovation works were carried out at the new cemetery on Kościuszki Street: a wall was put around it, a few dozen matzevot were recovered. In 1992, a Holocaust victims memorial was erected at the cemetery and 10 years later, remains of two individuals uncovered during renovation of one of the town’s houses, were buried at the cemetery.

The former mikveh building at the corner of Nowa and Przyjazdowa streets has been converted into a residential home. The Jewish tenement house at no.19 on the Main Square is now occupied by a commercial space. Similarly, the former Jewish inn at the corner of Krakowska and Kolejowa streets is now in private hands. The edifice that housed Jewish shops and wholesale depots, now serves as the city hall building. In turn, Staszów Regional Museum showcases the remains of the Judaica, such as the 18th-century Torah scrolls from the local synagogue and a few photographs. This is all that is left of the town that used to be Jewish. 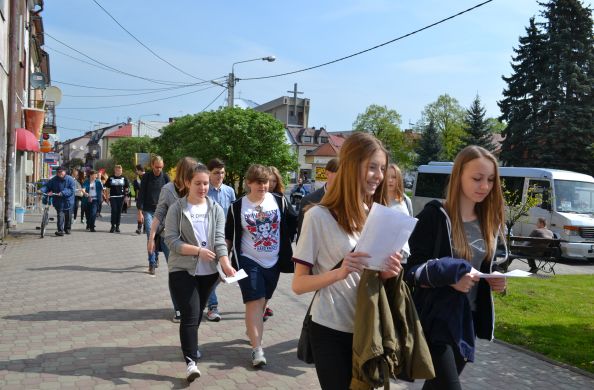 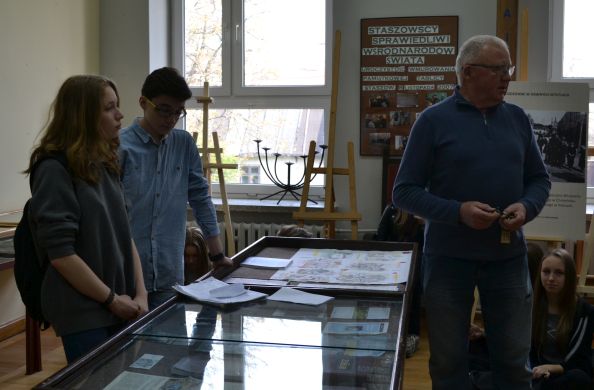 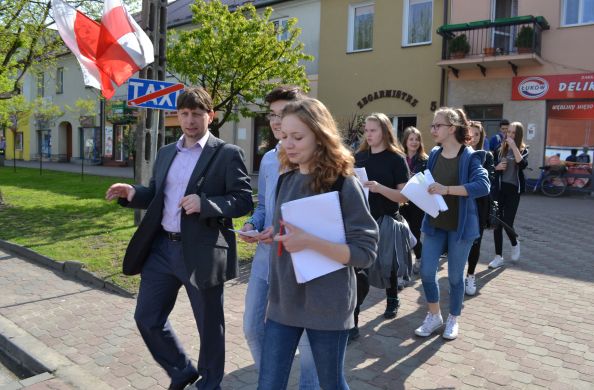 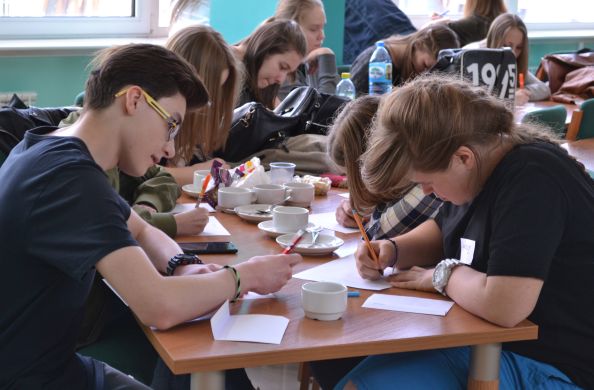 In 2007, on the 65th anniversary of the liquidation of Staszów’s ghetto, a memorial plaque was unveiled to commemorate the 23 local residents who saved local Jews during World War II. A few years later, on October 4, 2012, a memorial march was organized in memory of “Black Sunday” of November 8, 1942.

During the School of Dialogue workshops, local students proved to posess a considerable amount of knowledge about Staszów – they knew what stood where and what still remains. They were actively engaging in workshop activities and discussions, emotionally responding to the topic of the Holocaust and showing great interest in hearing about contemporary Israel. Students would speak up, share their reflections and formulate questions.

They decided to invite students from the school’s lower grades to participate in their walking tour of Jewish Staszów. The event was also attended by the deputy chairman of the local Town Council; passersby would stop and listen, some of them soon moving on, others joining the group for a longer while. Tour participants gathered at the main square, where their guides provided them with an overview of Staszów’s Jewish history, explaining when first Jewish settlers arrived in the town, how many of them were there and what were their occupations. What was everyday life like, what kind of products they traded and where and when they were taken away. Students presented photos of prewar Staszów and handed out maps with the tour’s route as well as handmade mini-dictionaries explaining terms connected to Jewish religion and culture: what is a mikveh, what does desecration mean and why is this word so important.

On the site of the former synagogue students explained what the synagogue is and what is its role in the life of the Jewish community. How are synagogues constructed, what did the one in Staszów look like. One male student discussed the fate of the building over the years, how it would be used and in what year it was demolished.

Next, a female student showed the group a plaque commemorating Staszów’s Jews and another one commemorating the Poles that tried to rescue their Jewish neighbors during World War II.

Here, participants received another portion of the mini-dictionary, explaining words like yad, Torah, menorah and kaddish.

After almost two hours of touring, the group reached the Jewish cemetery at Kościuszki Street. Before entering the site, older students explained to their younger guests the significance of the cemetery to the Jews and the rules governing a visit to the Jewish cemetery. They also presented the history of the site, describing a Jewish funeral ceremony and other burial customs. They explained why the headstones are not standing in their original positions – because they had been taken to pave roads and only after many years were recovered and returned to the cemetery. Next, student participants received printouts with the Hebrew alphabet and images of Jewish tombstone symbols and were supposed to make sense of what they saw and decipher whose names are engraved into matzevah stones. Tour guests asked questions that young guides did their best to answer. At the very end, everyone received more terms to remember from the tour, so that they would remember the name of a Jewish headstone (matzevah) and that yarmulke is a type of a head covering.

In front of the building that once housed the mikveh, students explained its original function, when it is visited by men and women and why it stands in such close proximity to Czarna river.

The final stop on the tour was Staszów’s Regional Museum, where students presented to the group a Torah fragment that was once in the local synagogue, and photographs of prewar Staszów. The museum keeper added a few words as well. Before parting ways, everyone was treated to a piece challah bread.

This isn’t just about the Jews. The workshops made me aware of the concept of ‘memory’ in general.

It was all a lot of fun, but we would learn more and more as well. We gained knowledge on new topics and wanted to know even more. I feel enriched by this knowledge and the whole experience. Thanks to the educators I had faith in our final project, as they made us believe we  can do it.

I now have tons of ideas in my head and hope that they will all come though. Not only will I organize a fun event, but also pass on loads of interesting information to other residents of my town.

We live on the site treaded by our ancestors and we have no way of ascertaining that they were not Jews.

School of Dialogue program in Staszów was made possible by the support from ALISA LEVIN.