Suchedniów is a town in Świętokrzyskie voivodeship, located among the woods of the Świętokrzyska Forest, between the pines and spruce trees, oak trees, sycamores and birches. First mentions of Suchedniów date back to 1224. It has been documented that the local Jewish community amounted to 420 members, or 6% of the population, and between the two World Wars this number was a little higher: Jews comprised 8-10% of the local population. Most of them lived along Handlowa or Trade Street (now known as Powstańców 1863/1863 Street. In the place where Handlowa merged with Bodzentyńska Street stood a synagogue and a cheder. Bankowa Street (now renamed after Polish romantic poet Adam Mickiewicz) used to be where the rabbi’s house once stood.

Jews in Suchedniów were merchants, but also ran their own industry and artisan workshops. The Warszawski brothers, Zelig and Israel, had their own steam mill, which was later bought by the father of Polish poet Gustaw Herling-Grudziński, who often mentions Suchedniów in his works. Jewish boys’ and girls’ schools operated alongside a Jewish library with a reading room that was used both by Jews and Christians. A Jewish theater and a few associations also functioned in the town.

In 1939, the Judenrat was established, with Zelig Warszawski as its head. From February 1940 onwards, Jews were forced to wear armbands. Around that time, a sizable group of the local Jewish youth were forced to provide labor in the HASAG workcamp in Skarżysko-Kamienna: a German industrial compound producing ammunition, among others.

By December 1940, around 300 Jews from surrounding towns and villages had been brought to Suchedniów; in March 1942, another 650 Jews arrived from Płock. Many of the latter died, being in very poor health. In 1941, an open ghetto was established in Suchedniów. It was liquidated on December 21, 1942, on the day of Yom Kippur; a day of absolution of those who express penitence. The ghetto had residents from Suchedniów, Płock, Bliżyn, Bodzentyn, Samsonów and Zagnańsk. Some of them were transported to Treblinka, others to the workcamp in Skarżysko-Kamienna. The remaining 250 Jews were forced to clean what was left and then were sent to a work camp in Bliżyn. Some of them managed to hide. Thanks to Mr. Witold Poziomski, a local doctor, judge Aleksander Jankowski, forest ranger Mr. Józef Kostyra and a few others who organized such hideouts.

Students from Staszic Junior High School had loads of energy from the very beginning of School of Dialogue workshops that were led by Forum’s educators, Izabela Murawska and Katarzyna Niewczas, a few times over the fall of 2015. The students already knew a lot, but wanted to learn even more. And so they went in deeper and looked further; to create a walking tour for their town’s residents they searched for new information and made new local and international acquaintances: locally, with Mr. Szymon PIast, “Our Suchedniów” blogger; and with Mr. Jerzy Frątczak, who remembers the town from prewar times. The international connection was via Skype with Ms. Gili Caspi, a descendant of Suchedniów last rabbi. They talked to town residents, enquired about topics that they still did not know about, about things that still seem mysterious. 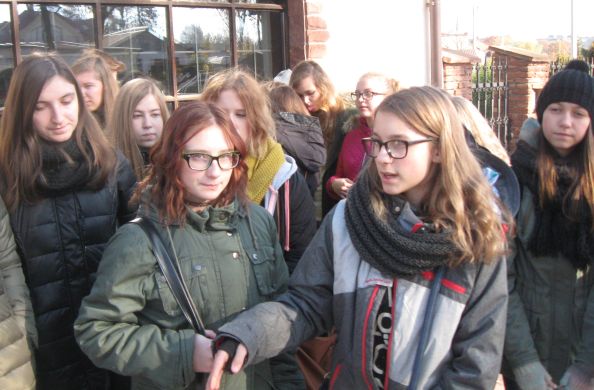 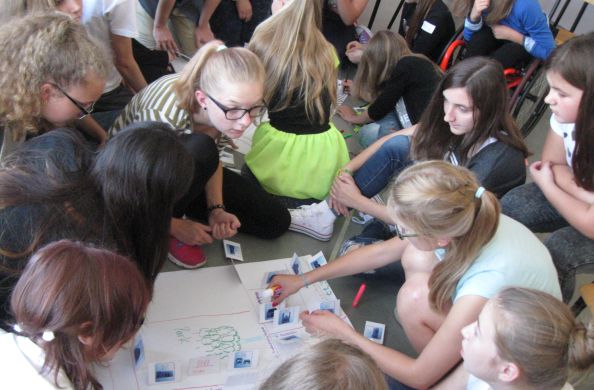 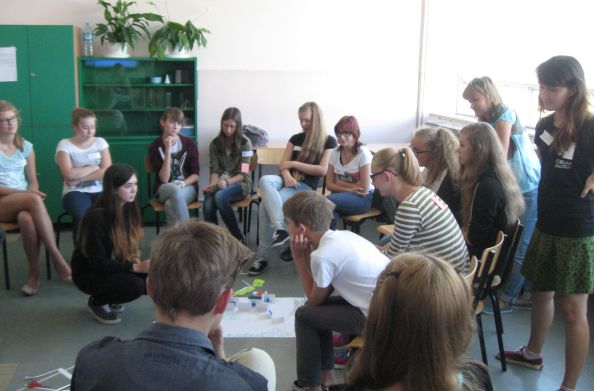 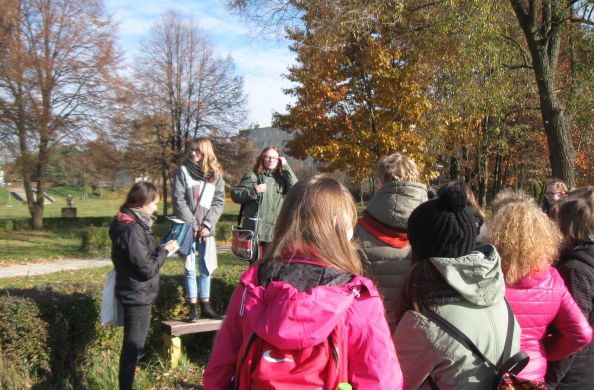 Finally, everyone met and together they went, students and the guests they had invited –junior high school youth as well as a few adults: the aforementioned Szymon Piast and Jerzy Frątczak; Ms. Beata Lis, whose family members received the title of Righteous Among Nations and Mr. Paweł Słoma from Suchedniów Town Council. Among others in attendance was also a local journalist, Mr. Jacenty Piast. They all met their young guides at the “Smithy” or the local Cultural Center, where students explained what School of Dialogue is, that many schools have already participated in this project, what is the project’s topic and how they themselves decided to handle it; what is their idea and plans for the future. They listed the questions they had posed to local residents, discussed their poll’s results and what they indicate.

The next step was the tour itself. Step by step, , the route led toward the bust of dr Poziomski. One of the students told everyone about the doctor’s life, where he lived, whom he had lost. Another student, dressed in a doctor’s coat and a stethoscope, impersonated dr Poziomski and told his life story from a first-person perspective.

In front of the rabbi’s house, two girls explained who lived there before the war; that it was rabbi Izrael Dawid Lejman, who would later die in Treblinka. They explained who a rabbi is, what is the etymology of the word and what it means – rabbi, rebe, master. They talked about the role of rabbis in contemporary times, what a rabbi does a few dozen of years after Izrael Lejman.

At Handlowa Street one of the students impersonated a young Jewish boy treating everyone to dates. Here, students talked about Jewish shops, selling glass, china and pots. About a haberdasher’s shop on what was once Przejściowa Street – to the right. To the left – a garden and at Krótka Street a butcher shop. Opposite of it was a hardware store and around the corner from there, where the shoe shop now stands – another butcher shop. All meat was kosher there, no one had to worry about that.

The group also visited the site of the synagogue, originally erected in 1892. What is a synagogue and what does it look like? And what is a menorah, Tora and bima? The students explained. They told the group about a mikveh that used to be located in a wooden building nearby, at Handlowa Street. They explained that the synagogue was burnt down after 1945, and that it remains unclear when exactly and who had done it, either.

Local poet Jan Gajzler used to live in a house located in a park, not far from the bus stop. This became the collection point for Jews who were then led to the train station during the war. The trains would depart for Treblinka. Standing at the train station, tour participants learned about the events held there in 1942; how women and children would be sent to one place, and others were sent elsewhere, and where that elsewhere was.

Apart from the everyday matters like your grade in history and skipping regular lessons, you can learn more about your family, the history of your town and its residents. You get this sense of fulfillment – that you have done something for the community.

All these pieces of information are very valuable to me; when I have my own kids, I will be able to tell them about prewar Suchedniów and about Jewish culture.

We Skyped with this lady from Israel. It was awesome!