School of Dialogue at Zamoyski Family School Complex No 1

Continuing School of Dialogue in 2013

In prewar Szczebrzeszyn one would encounter mailman Mojsze Kliszke, who sometimes used steam to open other people’s letters; sofer rabbi Meszulam, who demanded high prices for his mezuzahs; and rabbi Moteł Wolbromera who was a grains and wood merchant that one day lost his good fortune due to a mistake in the mezuzah scroll. These and other characters have been described in a book of short stories “Szebreszin” written by Philip Bibel, who left the town and emigrated to the United States at the age of 15. All of them came to life: 50 characters from Bibel’s book were cut out in cardboard in a scale of 1:1 and then colored with paint and crayons. The reading of “Szebreszin” and School of Dialogue workshops sparked in program participants a fascination with their town’s Jewish past.

Jews inhabited Szczebrzeszyn already before the early 16th century, which is the presumed time of construction of the first synagogue. They traded cloth, linen and colonial goods, and cultivated vineyards. They ran their own slaughterhouses, tailor, carpentry and woodcarving shops. They had their own hospital, cheders and a yeshiva. In the 19th century, first Hassidim appeared in the town, as well as followers of Sabataj Cwi; the latter were described in one of his stories by Isaac Bashevis Singer, whose grandmother – Tema Blima Szejner – grew up in the town.

There were wealthy Jewish families, like the Szpers, the Kupers and the Flajszers that lived around Zamojska Street; and poorer ones that lived in small wooden houses at “Zatyły”.

In the interwar period, half of the population in the town was Jewish. Local cultural and educational life blossomed: the town had a Zionist theater group, Jakub Abramowicz Jewish library and a drama group. However, already in September 1939 first German troops arrived in the town to put an end to all this. They forced religious Jewish to burn the Torah, and in November 1939 they devastated the synagogue, Jewish homes and “Zatyły” neighborhood. From 1940, Jewish residents were forced to work at the Klemensowo airfield construction site. In August 1942, half of the community was deported to Bełżec death camp. The remaining 2 thousand people were shot to death by German soldiers at the local Jewish cemetery.

It was through the efforts of the local teacher Kinga Kołodziejczyk, who majored in Jewish studies, that School of Dialogue came to Szczebrzeszyn. Students were eager to join the program, acquiring new information about Jewish culture and history, also at the local level. “We had the opportunity to explore our town’s history and that of its prewar inhabitants” they said. In the course of a walk through the town with Forum’s educators, students were able to see the synagogue building with an impressive main hall (reconstructed in the 1950s), as well as the Jewish cemetery – one of the oldest in Poland, yet quite run-down. Thanks to diaries written by Michowski that Kołodziejczyk discovered, students were able to see directories of prewar tenement houses with information about their residents. Prewar shtetl of Szebreszin was slowly coming to life in their heads… 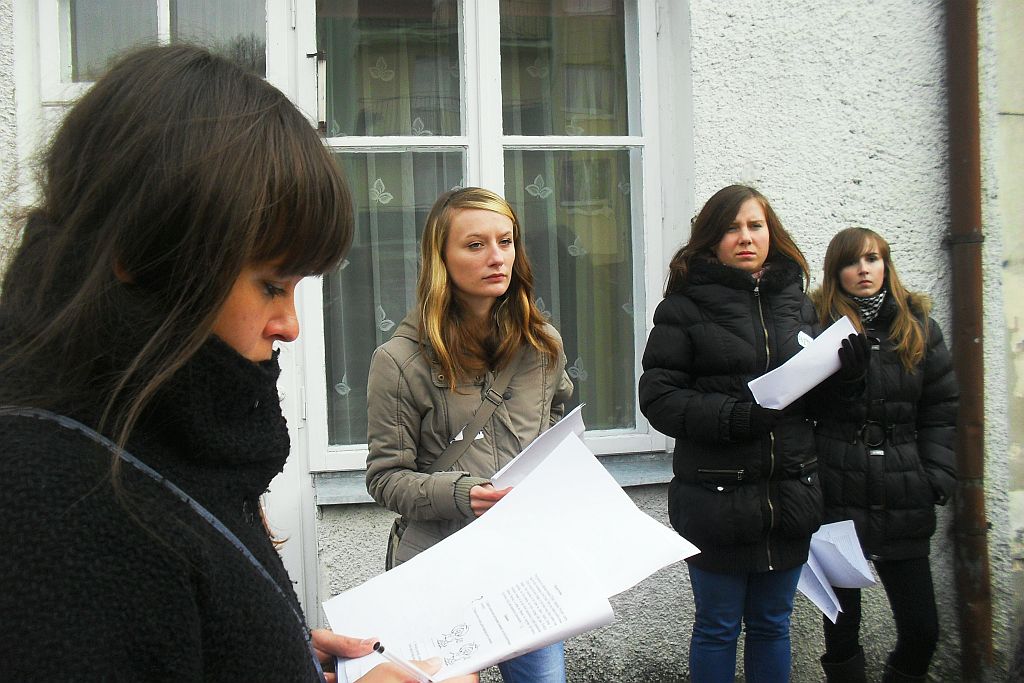 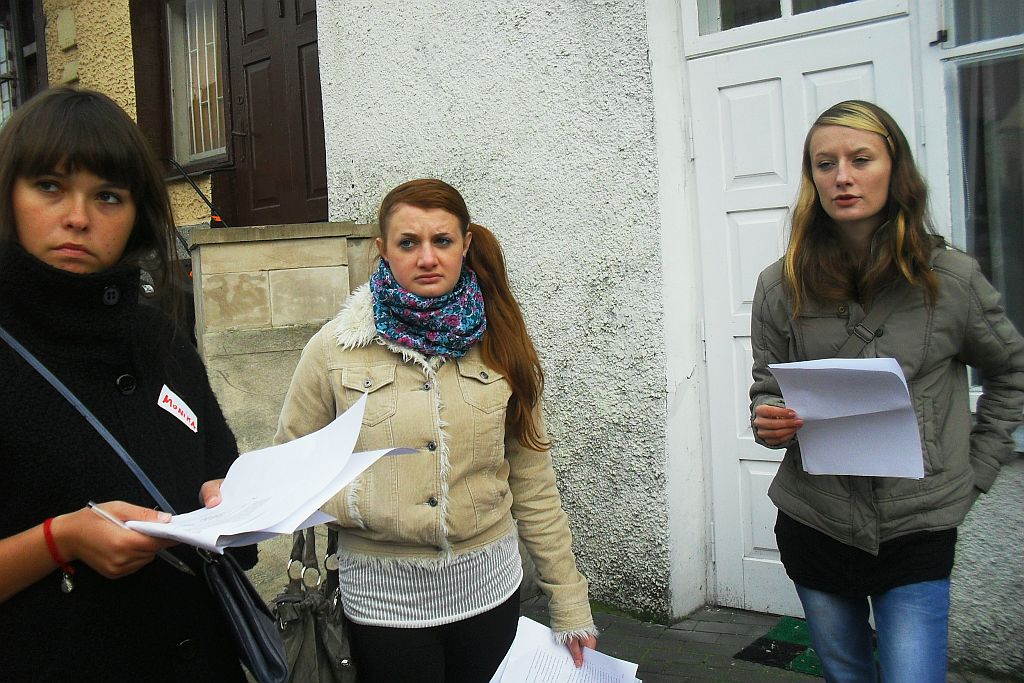 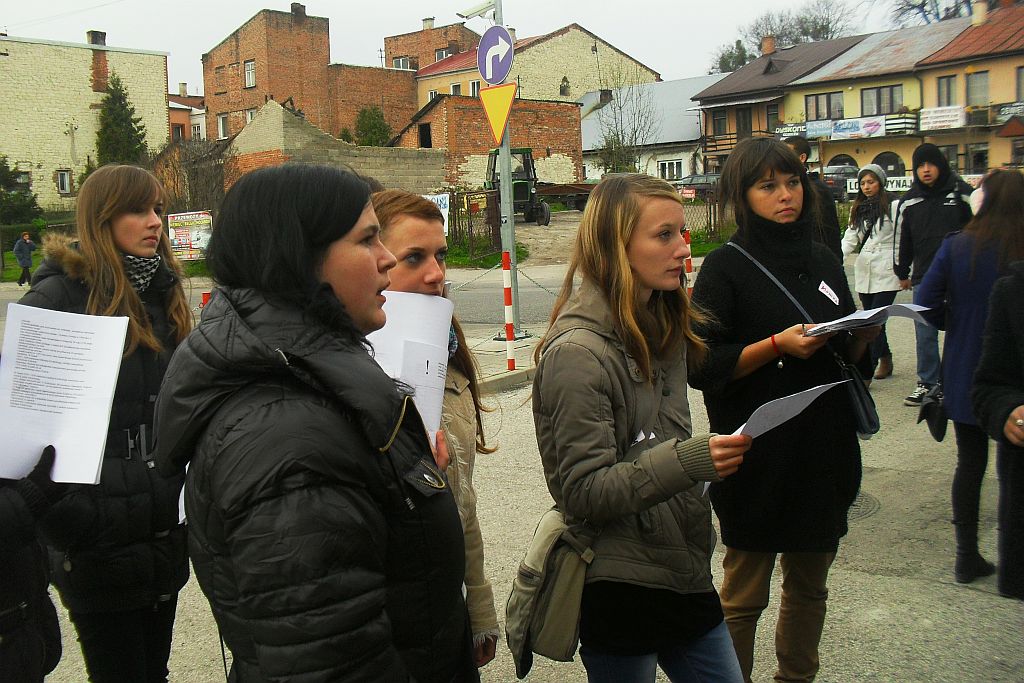 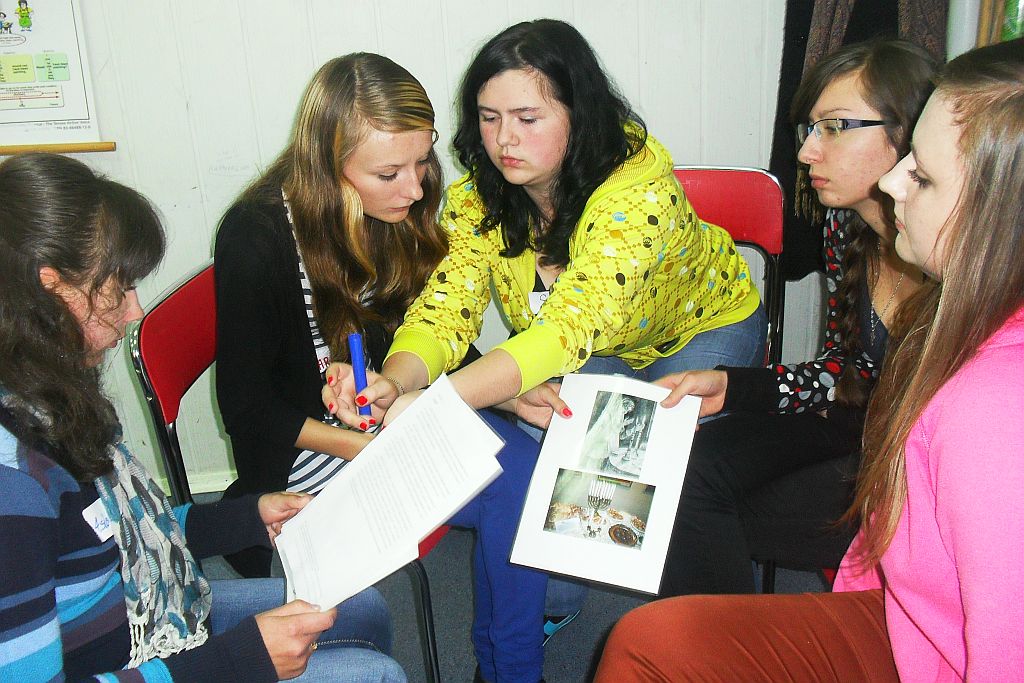 Their project of commemorating Szczebrzeszyn’s Jews took the form of an urban game, with students of the nearby junior high school invited as participants.

Preparing for the event, project participants created a logo of the event that combined menorah with the emblem of Szczebrzeszyn: three silver parallel stripes symbolizing the rivers – San, Bug and Wieprz – that surround the town. They also designed invitations to the tour, prepared a presentation and baked cookies in the colors of the Israeli flag. One of the students met with Łukasz Babula, who works at the Department of Jewish Culture and History at Marie Curie-Skłodowska University of Lublin. Additionally, text for tourguides had to be prepared as well, as well as urban game cards and tasks to complete in the course of the game.

On the morning of the day of the tour (in December), students from Zamoyski Family School Complex no.1 anxiously awaited their guests, looking through the window at the snow-covered school gate. Soon after greeting the delegation of students from a nearby junior high school and showing them a short film “Mistakes” (Błędy) shot earlier by some of the students for the purposes of Isaac Bashevis Singer festival, it was time to start the game. Teams headed off into town armed with maps which pointed to various stops on the tour.

Urban game participants had to locate guides holding flags with the event logo and complete different tasks. And so they were asked to decipher symbols on Jewish headstones, identify the elements of a synagogue’s interior and describe what a mikveh is used for. Tour guides told them about Deborah Fleischer, who composed and played melodies in “Muza” movie theater; about the magnanimity of Morechaj Fleischer and about Jankiel Grojser, a mobile lemonade vendor who fought in the battle of Monte Cassino and was buried in 1970 at a Catholic cemetery as there was no possibility to organize a funeral at the Jewish cemetery.  By reaching the designated spots game participants received stickers that would allow them to continue to subsequent stops of the route. After everyone returned to the school, game organizers held a recap sessions and invited junior high school students to try the cookies. Students were happy to report that “participants themselves stated that they had the opportunity to look at their town from a different, often ignored, perspective. They learned more about the local history and historic buildings.”

The event did not go unnoticed by Szczebrzeszyn locals – curious pedestrians would stop, ask and react – contrary to students’ fears – in a very positive way. Once the project was completed, School of Dialogue graduates coordinated a Polish-Israeli youth exchange program.

Many interesting pieces of information about Jewish culture stayed in my head thanks to the fun activities. Thanks to these sessions, I decided to learn even more about this subject. I learned a lot about my hometown that once was home to many Jewish families.

Our task now is to organize a walking tour for junior high school students and to share our knowledge with them. We want to convince them that Jewish culture is fascinating and Jewish traditions date many centuries back.

Every person, regardless whether they’re Catholic, Jewish or of a different religion, should have at least the basic knowledge of Jewish history and should be able to pass it on, as this knowledge is important for both Jews and non-Jews. We are all connected, even if we practice different religions.

I learned many interesting and moving things – stories about real people who were murdered with their families, friends and children looking on. After these workshops my outlook on the world has changed and so has my way of thinking.

School of Dialogue program in Szczebrzeszyn was made possible by the support from TOMASZ PAŃCZYK, TOMASZ KAPLIŃSKI, RAFAŁ KOS and STANISŁAW ŁOPALEWSKI.