Adolf Cohn was a pharmacist, one could buy shoes in the Herman Holz’s shoe store, and meat at the butcher’s, Hermann Less – this is what junior high students from Sztum talked about during their final walking tour.

Sztum is a small town (with around 10,000 inhabitants), located in the Pomeranian province. It is unknown when Jews started to settle here. The first mention dates back to 1788 and refers to Jacob Lewin. In 1831, Jews constitutes 10% of the town’s population, nearly 100 people. Most of the Jewish families left Sztum over time. They would leave mainly to Berlin, Vienna, Hamburg or America. According to many sources, in 1939 there were 3-13 Jews in the town. Until today, there have been very few sites referring to the Jewish history of the town preserved.

Already at the first workshop, the students showed a lot of engagement, self-reliance and openness. These workshops were, for most of them, the first introduction to who Jews are and who they were. The students were unaware of the multicultural past of their town. It was the first time for them to reflect on their identity, discuss tolerance and confront stereotypes.

“I really liked the workshop about identity of each individual. We were made aware that each person is different, yet we all share common values. Before you form an opinion about someone, you should first try to get to know that person. Also, you should avoid stereotypes and respect different religions. These workshops will always stay in my heart, it changed my perspective on the world,” Maja, one of the students, summed up the workshops.

When preparing the walking tour, the students searched for information in different sources. They invited Janusz Ryszkowski, an expert in public relations of the Town Hall, to their school. He told them about the Jewish history of the town. The junior high students also visited the local museum, scoured books in the library, talked to the oldest inhabitants of Sztum. The students were eager to share their newly acquired knowledge. They organized workshops for younger students from first-third and fifth-sixth years of elementary school No 2. These workshops included a huge amount of knowledge, interactive tasks and a snack. The final walking tour was organized on December 3. 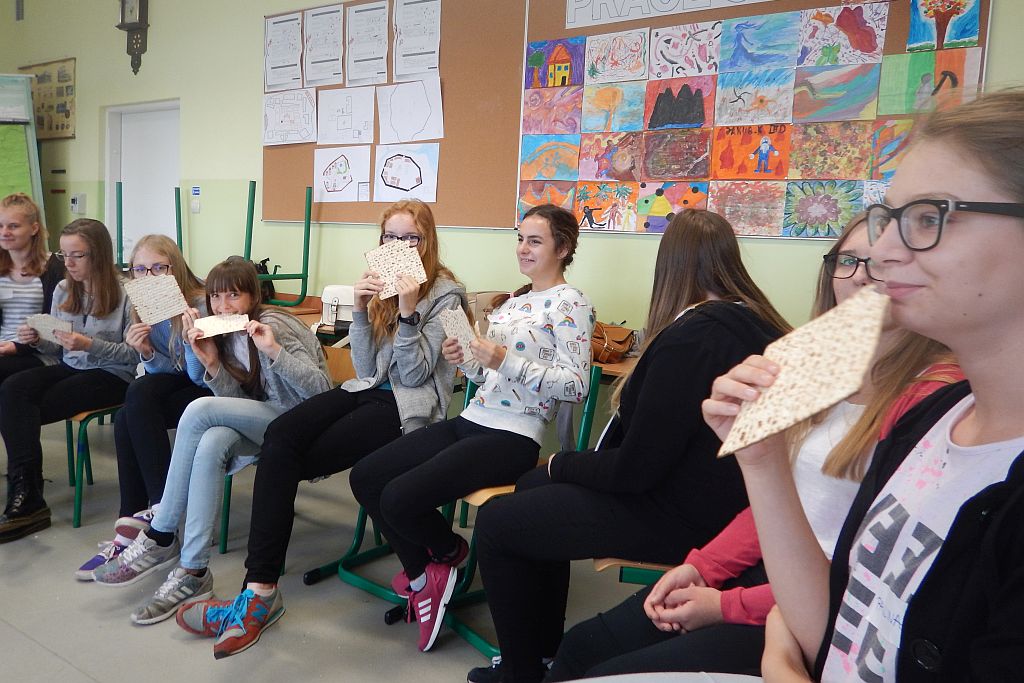 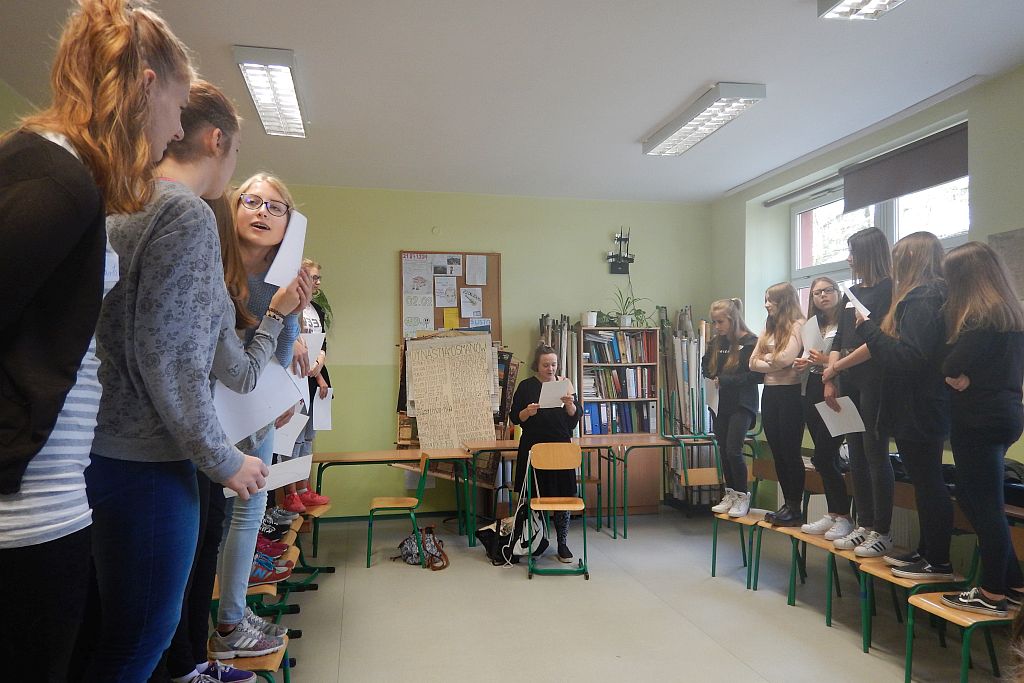 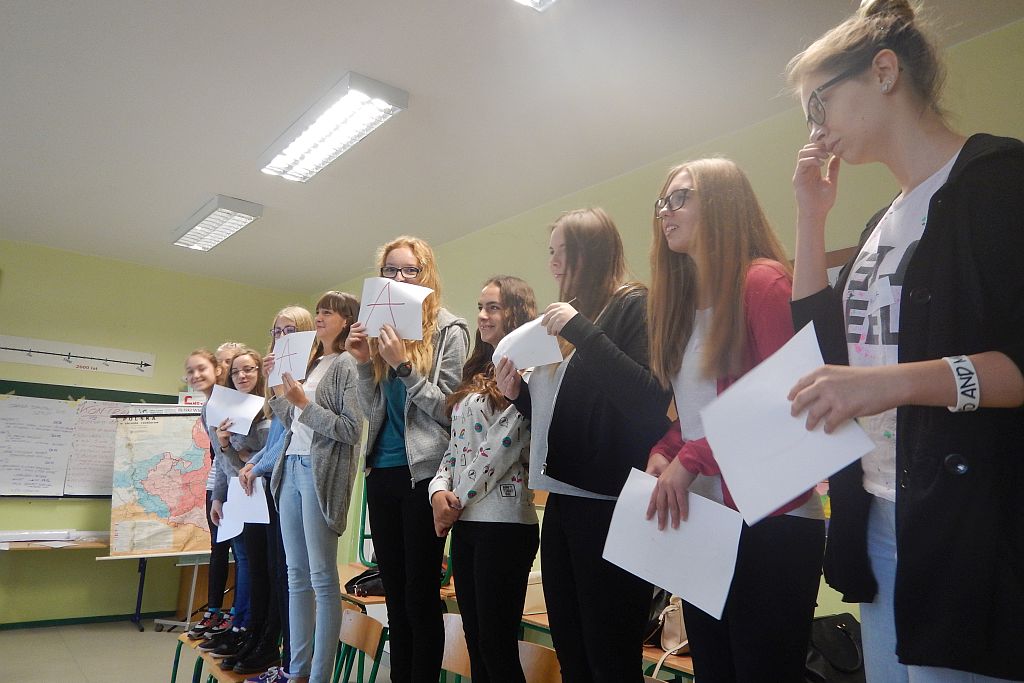 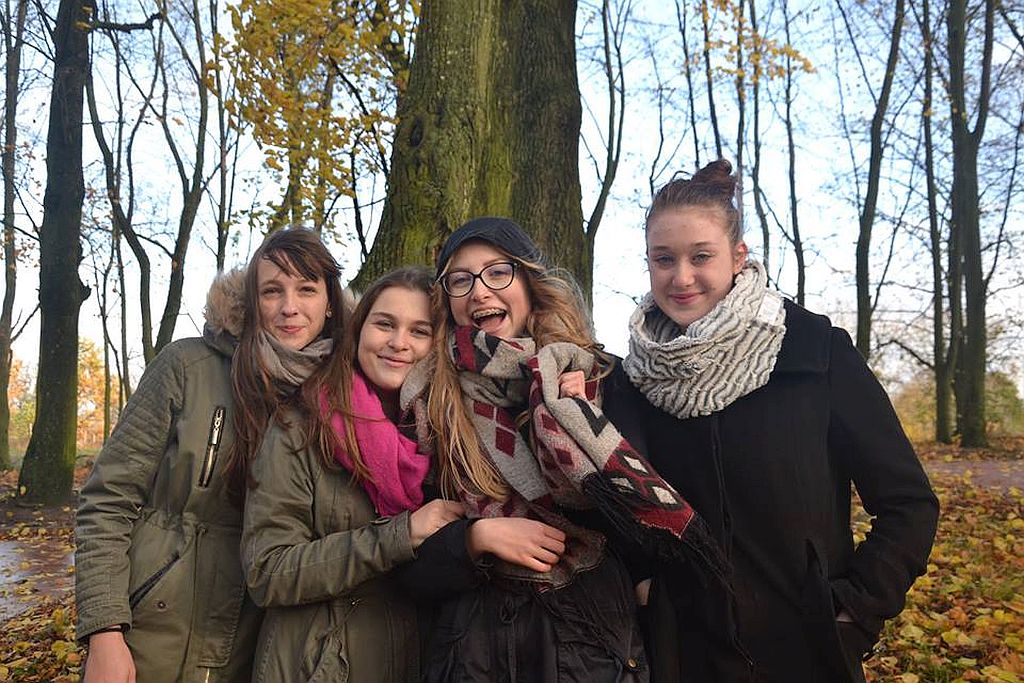 The town inhabitants who came to the tour received tour guides with the most important information about the Jewish history of the town and a map with tour stops marked on it. The meeting started with a visit to the Museum of Sztum. The junior high students introduced the guests to the prewar atmosphere of Sztum, they talked about the beginnings of Jewish settlement in the town and about Judaica which can be found in the museum. Next, they all went to Jagiełło Street, where the pharmacy of Adolf Cohn used to be. The guides talked about the professions Jews had. Then, there was a quick break and the tour participants could enjoy some challah and a cup of hot tea. At the next stop, the youth spoke about the importance and the fate of the synagogue in Sztum. At the intersection of the Mickiewicza and Młyńska streets, the guests learned the story of the shoe store owned by Herman Holz. The students also talked about the persecutions that Jews had to experience.

The last stop was the old cemetery where a park is located today. The junior high students, together with the guests, stretched a string around the area of the former cemetery to mark its borders. They spoke about the rules for behavior at the cemetery and invited all the participants to symbolically place a stone at the monument commemorating this place. The students did more than just a walking tour. They started a fundraising campaign to put up a plaque with the most important information about the Jewish community of Sztum. They also edited an article on Wikipedia about the Jewish cemetery in Sztum and added a few photos to the Virtual Shtetl website.

As part of the report from the project, the students prepared a presentation and made a film.

Thanks to the walking tour organized by the entire group, I learned a lot of new information about Sztum. I did not know there was a synagogue or a cemetery in our town. I was unaware that Jews had lived here.

We learned to collaborate as a group. We started to take action, organize events and gather information that we needed.