School of Dialogue at Junior High School No 1

“Little old church” is the commonly used name for the synagogue in Szydłowiec. The building is located in Garbarska Street, next to the edifice in which Nuta Ajzenberg, the synagogue’s builder, ran a tannery. At the turn of the 17th and 18th centuries, Jewish population was a significant element of Szydłowiec’s society, and in the 19th and at the beginning of the 20th century it dominated over the town’s Polish population. Aside from business, Jews led very active religious, cultural and political lives. Szydłowiec boasted two synagogues, a mikveh, a cheder, and two cemeteries. This community ceased to exist on January 13, 1943 when the last Jews were transported from Szydłowiec to the death camps in Treblinka. What’s left of them are documents in archives and historians’ compilations, and in Szydłowiec itself: hundreds of inscribed headstones made of local sandstone, as well as the mikveh and the synagogue.

Thanks to the help of Forum for Dialogue educators, the students had an opportunity to learn terms related to Jewish culture, which made them realise that the “little old church” is not actually a church, but a synagogue. Basing on the information and skills learnt during the School of Dialogue workshops, the students were able to get to know more about the pre-war history of their town and its Jewish community. To learn more on the subject they asked their former class tutor, Ms Sława Lorenc-Hanusz, for help, and they also consulted a local historian and interviewed an elderly inhabitant of Szydłowiec. 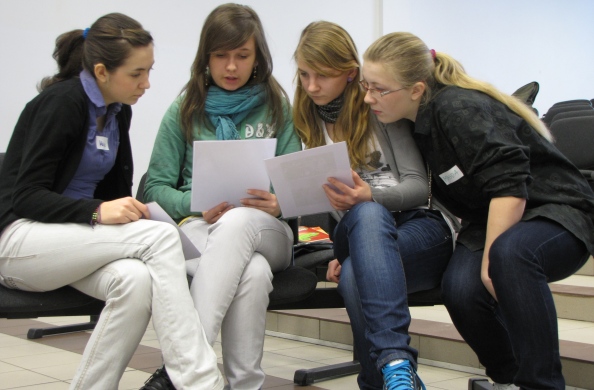 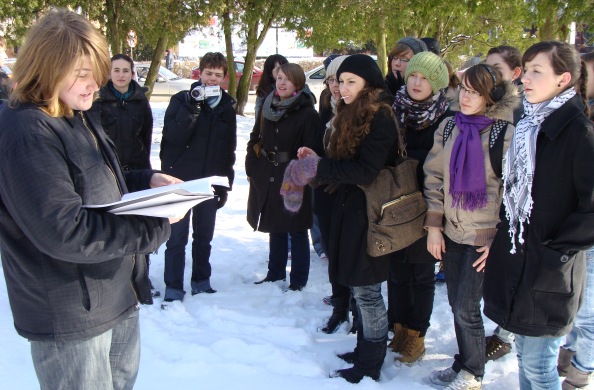 Next, the students guided their younger colleagues from school to the most important spots related to the Jewish history of Szydłowiec. To present the pre-war shape of the town the students gathered extensive photo materials. Focusing for a moment on the black-and-white photographs, one could see girls in white dresses in front of a Jewish photo atelier, horse-drawn carriages in Szydłowiec’s town square, boys in a loom workshop, older Jews sitting on their houses’ thresholds, as well as younger Jews curiously watching the photographer.

The individual stops along the walking tour were located in places where Bergman the Jew’s mill, Redlich’s factory, the depot square, and the castle used to be.

The students discussed old Jewish education system in Poland, the ghetto in Szydłowiec, and the deportation of the Jews from the town. The Jewish cemetery, voluntarily cleaned by the students a little earlier, was an important stop along the itinerary. The purpose of the stroll was not only to learn the places related to the Jewish community, but also to make the participants aware of the significant role played by this community in the town’s life.